Gynecologic tumors make up only approximately 6% of all malignancies in the United States, but are responsible for a greater percentage of deaths. The most common gynecologic malignancy is endometrial cancer, while ovarian cancer is the leading cause of death in this category and fourth leading cause of cancer mortality in women with 16,000 deaths per year. The incidence of cervical cancer in the United States has significantly declined over the years, but out of 10,370 expected cases in 2005, there are still 3,710 estimated deaths.1 The worldwide incidence of cervical cancer is extremely high, with 493,243 cases per year, more than twice the incidence of endometrial and ovarian cancers.2

While endometrial and ovarian cancers are staged surgically, cervical cancer is clinically staged; and as such, imaging is heavily relied upon, although not an official part of the staging. Historically, computed tomography (CT) scans have been used in this regard, and later magnetic resonance imaging (MRI), but with the emergence of 18F-fluoro-deoxy-D-glucose and positron emission tomography (FDG-PET) as an imaging tool, both an anatomical and biological perspective of the tumor can now be gained.

This chapter will examine the rationale for the use of PET and PET-CT in the treatment of patients with gynecologic cancer, techniques used for fusion, and associated challenges. Studies using PET-CT for treatment planning will be reviewed and future directions discussed. Cervical cancer will be highlighted, since most of the experiences in the literature center on this site.

RATIONALE FOR USE OF PET AND PET-CT IN GYNECOLOGIC MALIGNANCIES

The literature available for PET-CT and gynecologic malignancies is much less than that for other anatomic sites such as head and neck, lung, or the lymphatic system. The focus has been on cervical cancer since this is the only gynecologic malignancy currently having approved coverage by Medicare, and this inclusion is relatively recent, effective January 2005.3

Follen and colleagues provide an excellent overview of imaging modalities (CT, MRI, PET, lymphatic mapping, lymphangiography, and ultrasonography) used in the staging of cervical cancer, with a comparison of their capacity to measure prognostic factors such as tumor extension into the bladder and vagina, tumor size, and lymph node metastases, as well as their cost-effectiveness and clinical efficacy.4 CT, MRI, and PET are the most common imaging modalities, and the technology is continually advancing. The development of helical or spiral CT has improved the resolution of images obtained. When comparing helical CT to dynamic MRI, Yang and colleagues reported a sensitivity of 64.7% vs. 70.6%, specificity of 96.6% vs. 89.8%, and accuracy of 89.5% vs. 85.5%, respectively.5 CT scans show lymph nodes > 1 cm, but do not define their architecture. MRI gives more information with accuracy in staging of ≥ 90% with regard to tumor size and bladder wall invasion and is useful for characterizing small lesions and showing fistulous tracts.4 PET, on the other hand, is better at identifying lymph node metastasis, which is critical in staging and, more importantly, determines the prognosis of patients with cervical cancer.

Narayan and colleagues evaluated the ability of MRI and PET to detect lymph node metastases in patients with cervical cancer prior to treatment, with pathologic correlation.7 For pelvic lymph nodes, the sensitivities of MRI and PET were 50% and 83%, respectively. All histologically confirmed sites not visualized by PET were < 1 cm in size.

Grigsby and coworkers retrospectively compared the results of CT and FDG-PET for lymph node staging in 101 patients with cervical cancer and their correlation with progression-free survival after radiotherapy and chemotherapy.8 While CT findings sho-wed enlarged pelvic and para-aortic lymph nodes in 20% and 7% of the patients, respectively, the abnormal FDG uptake in pelvic, para-aortic, and supraclavicular lymph nodes was 67%, 21%, and 8%, respectively, changing the radiation fields and dose in 14% of the cases and the overall management strategy in 8%. They also demonstrated that the most significant prognostic factor for progression-free survival was the presence of positive para-aortic lymph nodes as detected by PET.

Another study by Park and coworkers compared MRI and PET for detecting parametrial involvement and lymph node metastasis in patients with cervical cancer.9 In this study, the accuracy for detecting metastases was increased with PET compared to MRI (78% vs. 67%), with PET identifying pathologic-proven lymph nodes, even some < 1 cm in diameter. In their study, approximately one third of patients showed a discrepancy between FIGO staging and pathologic findings. There was decreased sensitivity of PET in this study but better specificity, positive predictive value (PPV), and accuracy in detecting lymph node metastases compared to MRI. They concluded that the reason for this was that 70% of the lymph nodes were < 1 cm, combined with the poor spatial resolution of PET.

A review of 25 studies of cervical carcinoma and ovarian cancer by Havrilesky and colleagues again confirms that PET is far superior to CT for detection of pelvic and para-aortic lymph node metastases.10 In this paper, lymph node detection with PET has a sensitivity and specificity of 84% and 95%, respectively, as compared to MRI at 72% and 96%, respectively. In detecting recurrence, PET is less useful in ovarian than in cervical cancer. This will be discussed later in this chapter.

The appropriateness of PET to evaluate response to treatment in cervical cancer was assessed by Grigsby and colleagues in two retrospective studies.11,12 They concluded that a complete metabolic response on PET (median time for PET scan after treatment: 3 months; range 1 to 12) was predictive of good survival (92% 5-year survival) and a partial metabolic response (persistent abnormal FDG uptake in irradiated areas) was predictive of poor survival (46% 5-year survival). None of the patients with new sites of abnormal FDG uptake outside the treatment volume, interpreted as progressive disease, were alive at 5 years.

In another study, Nakamoto and colleagues found that PET has better sensitivity to predict treatment response in cervical cancer, but lower specificity due to the lack of anatomic correlation when compared to CT.13

Further studies support the value of PET for assessing prognosis in cervical cancer.14,15 Tumor volume, intensity of FDG uptake, and presence of positive lymph nodes in pretreatment scans correlate with survival, identifying patients with poor prognosis. In a retrospective study evaluating failure patterns relative to lymph node size and irradiation dose, Grigsby and associates found that the most significant prognostic factor for developing distant metastases and dying from cervical cancer was abnormal FDG uptake in either pelvic or para-aortic lymph nodes at diagnosis.16 But given that these patients would eventually die of distant disease, the authors conclude that treating the positive lymphatic areas in a more aggressive fashion does not convey a survival benefit.

Patients are positioned supine with their arms in a wing board and feet secured. Gold marker seeds are placed in the cervix and lower vaginal extent of tumor at the time of examination under anesthesia. A cylindrical radiopaque vaginal marker is inserted intravaginally. Patients are not treated with this device in place; therefore, the vagina is dilated rather than collapsed for the planning scan, ensuring that the upper vaginal volume is adequately encompassed in the planning volume. The planning scan is done on combined PET-CT (GE Medical Systems, Milwaukee, WI) using both oral and intravenous contrast. It is important for the patient not to move during the PET and CT acquisition as this will result in misalignment of organs and bony landmarks (Figure 10-1). For routine imaging, the bladder is emptied prior to scanning to minimize urinary artifacts and enabling better visualization of pelvic structures. However, when a PET scan is made specifically for radiotherapy planning, a full bladder is preferred to reduce the amount of small bowel within the radiation field. 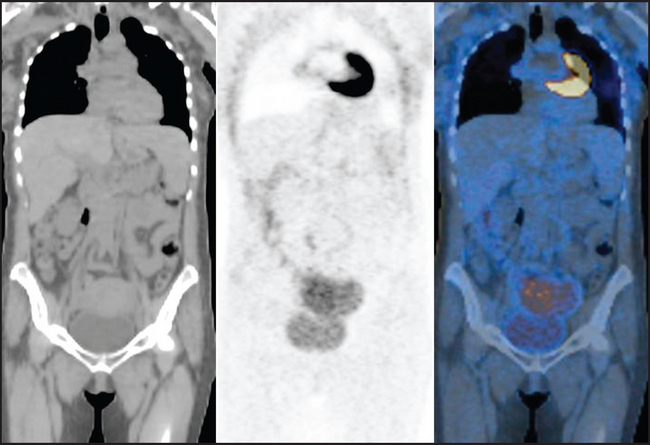 Figure 10-1 A 38-year-old woman with uterine carcinoma. (A) CT scan shows uterus above bladder. (B) The patient moved upward during the emission acquisition. The bladder is duplicated because of patient movement, mimicking FDG uptake in the uterus. (C) Uterus appears to have FDG uptake because of movement. (Note misregistration of the heart in PET-CT.)

All patients are asked to fast for at least 4 to 6 hours before imaging. FDG injection is given, and the patients rest during a 60-minute uptake period. CT scanning is performed before the acquisition of PET data in the treatment position as described above. Iodinated contrast is then administered intravenously. A helical CT scan extending from the base of the skull to the pelvis is acquired first with intravenous contrast st-arting 30 seconds before CT acquisition. We subsequently perform a 5- to 8-bed position PET data acquisition (4 minutes per bed position) for the same axial extent. The images are electronically transferred from the PET-CT workstation via DICOM3 to the Varian Eclipse version 6.5 (Varian Medical Systems, Inc., Palo Alto, CA) radiation treatment planning system in the radiation oncology department. Because the workstation, does not provide the quantification of FDG uptake in terms of standardized uptake value (SUV), we normalized all our PET studies to the FDG uptake in the liver without background subtraction. This procedure is routinely used to normalize the PET images on PET-CT workstations for diagnostic readings, and it allows for reproducible contouring of hypermetabolic areas. Some vendors give the option of drawing isocontour lines on the volume, and one can choose to use 40% or 50% of the maximum tumor uptake intensity level.

As an alternative method, Yen and colleagues described a dual-phase PET protocol for the assessment of patients with cervical cancer consisting of two scans: the first one at 40 minutes post FDG-injection and the second one, 3 hours later. The authors compared both PET protocols and found that the dual-phase protocol was more sensitive for the detection of distant metastases (90% vs. 70%), upstaging 27% of patients and downstaging 4%. With the new information provided by the late images, 24% of patients had their treatment field and/or dose changed and 4% were switched to palliative treatment.17,18

The pelvic clinical target volume (CTV) consists of a 1- to 2-cm margin around the vagina, cervix, uterus, parametria, and presacral space up to S2/S3. The abnormal area of FDG uptake in the cervix (PET-GTV) is part of the CTV. Because of the unreliability of current imaging techniques to determine whether there is involvement of the parametria, and the possibility of movement during the course of radiotherapy, all pelvic tissues lateral to the cervix and upper vagina are considered to be part of the parametria. The vaginal volume consists of 4 cm of vagina distal to the lower extent of the tumor. The external, internal iliac and common iliac nodal volumes are based on the contrast-enhanced vessels with a 1- to 2-cm circumferential margin. The planning target volume (PTV) consists of the CTV plus a 0.5 to 1 cm margin.