Introduction
Rationale for the Use of PET and PET-CT

PET and PET-CT for Initial Staging and Impact on Overall Management
PET and PET-CT for Assessment of Tumor Response to Preoperative Therapy
PET and PET-CT for Surveillance of Patients after Treatment, Detection of Disease Recurrence, and Restaging
Fusion Technique and Target Delineation
Problems Associated with PET-CT
Review of Studies Using PET-CT for Radiotherapy Planning
Case Illustration
Future Direction

Combined modality PET-CT is gaining greater use in the radiation therapy management of several gastrointestinal malignancies and is approved for the evaluation of esophageal cancer and suspected recurrent colorectal cancer in the setting of rising carcinoembryonic antigen (CEA) levels. However, the scope of FDG-PET in oncologic management is indeed much larger as it can provide valuable information in staging, evaluation of response to therapy, follow-up, and restaging for recurrent disease in numerous sites.

The impact of PET-CT on the overall management of cancer of the rectum and anal canal continues to be explored, with limited data on its influence on radiation field design. The current literature has emphasized the improved accuracy of PET-CT over PET or CT alone in initial staging, assessment of treatment response, and detection of recurrence. One of the most successful uses of FDG-PET is the detection of distant metastases at time of diagnosis, which can, in turn, change the intention of treatment from curative to palliative or identify patients who may still be considered for aggressive therapy after a curative metastatectomy.

Important limitations of FDG-PET must also be kept in mind during multidisciplinary discussions on appropriate treatment selection for patients with disease at these sites. These include potential staging inaccuracies due to uptake in uninvolved tissues or undetected uptake in small tumor volumes, peristaltic and respiratory tumor motion that may overestimate the areas at risk, limitations of available co-registration and fusion software, inappropriate selection of the isointensity of PET images, and difficulty in discriminating between inflammatory tissues versus residual disease in follow-up scans. Despite these difficulties, the ability of FDG-PET to detect disease that may not be seen in other imaging modalities can lead to improved target delineation for both initial and boost field design in the radiation therapy treatment planning in patients with rectal cancer.

Rationale for the Use of PET and PET-CT

FDG-PET and PET-CT can play an important role in the initial staging and overall management of patients with rectal cancer.1 Figure 7-1 shows an example of a patient with a T3N1M1 adenocarcinoma of the rectum with a large solitary hepatic metastasis at diagnosis. Studies thus far have demonstrated the superiority of PET-CT over other imaging modalities in initial staging accuracy, detection of hepatic metastases, and, ultimately, selection of the appropriate treatment strategies. Delbeke and colleagues determined in a literature review that FDG-PET is able to detect unsuspected metastases in 13% to 36% and has a clinical impact in 14% to 65% of patients with colorectal cancer.2 Similarly, Sachelarie and coworkers described an overall accuracy of 83% to 93%, specificity of 63% to 96%, and sensitivity of 91% to 98% of PET-CT.3 Accuracy in staging ranged from 83% to 89% while the sensitivity and specificity for local recurrence were 96% and 97% and for detection of distant metastases were 95% and 98%, respectively. 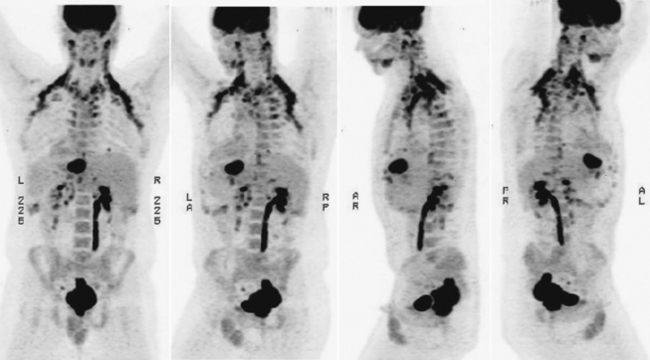 Figure 7-1 Images from a patient with a T3N1M1 adenocarcinoma of the rectum with a large solitary hepatic metastasis.

Two well-described advantages of the addition of CT to PET imaging are improved spatial localization and increased viewer confidence in characterizing lesions when compared to PET alone.4 In a comparison of PET-CT to PET, Cohade and colleagues determined that PET-CT was able to improve lesion localization by 45%, improve characterization of lesions by 30%, increase the number of lesions detected by 25%, and improve the overall accuracy of staging from 78% to 89%.5 Interestingly, there was no statistically significant difference in the sensitivity, specificity, and accuracy between PET and PET-CT.

Improvements as well as limitations with FDG-PET over other imaging modalities have been demonstrated as well. When compared for staging of the primary lesion, FDG-PET, CT, and ultrasound had a sensitivity of 78%, 67%, and 25%; a specificity of 96%, 100%, and 100%; and an accuracy of 91%, 91%, and 81%, respectively.6 All three techniques fared poorly in analyzing lymph nodes. Neither CT nor ultrasound detected potential lymph nodes at risk and PET showed a sensitivity of 29%.

One area in which PET has a clear advantage over other modalities is the detection of liver metastases as well as their resectability. Abdel-Nabi and colleagues describe a sensitivity and specificity of 88% and 100%, respectively, for FDG-PET compared to 38% and 97%, respectively, for CT.7 Others have described an ability of PET to detect 85% of lesions > 1 cm, but only 25% of lesions < 1 cm.8 Accurate localization of potentially resectable liver metastases can be of enormous clinical value and has been described to change the overall management in 40% and the extent of surgical resection in 23% of patients with colorectal primaries.8–11

Indeed, any change in clinical stage as a result of PET can ultimately alter the intended treatment plan for patients with rectal primaries. Meta and associates analyzed the impact of FDG-PET on the care of patients with colorectal cancer from the point of view of the referring physicians to several departments of radiology.12 FDG-PET contributed to a change in clinical stage and management decisions in over 40% of patients (80% of whom were upstaged and 20% downstaged). Surgery was avoided in 41% of patients in whom resection was initially planned and intermodality and intramodality changes occurred in 37% and 18% of patients, respectively.

At present, PET is not approved in the United States to assess tumor response during chemoradiotherapy for colorectal cancer. A single institution study from Italy, though, determined that FDG-PET was able to detect a local response within 10 to 15 days of initiating chemoradiation as well as identify nonresponders to treatment.13 Several studies have examined the potential role of FDG-PET in predicting outcome of treatment for hepatic metastases from colorectal cancer.14,15

One important advantage of the metabolic information gained from PET compared to other imaging modalities is its ability to discriminate between tumor, necrosis, and fibrosis in residual masses.16 However, the interval for appropriate timing of PET scan after preoperative therapy (either radiation alone or chemoradiotherapy) has not been established firmly. Most series recommend waiting for 2 to 3 months after radiation therapy for colorectal cancer to allow for healing of inflamed tissue that could show FDG avidity.16,17 However, this may lead to an inappropriately lengthy delay in surgery. At our institution we favor repeating PET-CT scans one month after combined modality therapy. Figure 7-2 demonstrates the pre-treatment and post-treatment PET-CT scans of a patient with clinical T3 rectal cancer showing that despite an excellent response on PET-CT, the patient had multiple positive lymph node involvement. 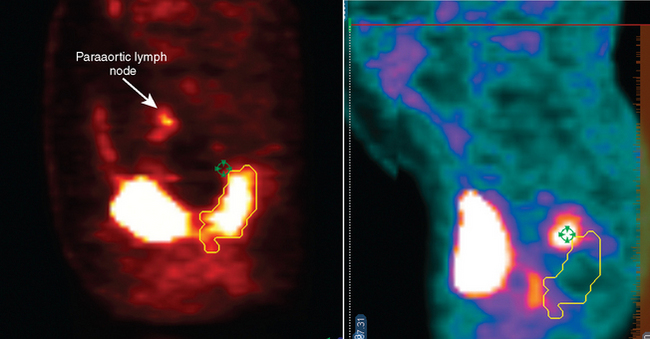 Figure 7-2 The image on the left outlines the location of a rectal primary in a patient with T3NxM1 adenocarcinoma of the rectum. Note uptake in a pariaortic lymph node. The image on the right demonstrates marked reduction within the original outlined tumor volume as well as within the periaortic lymph node. However, surgery identified persistent moderately differentiated adenocarcinoma as well as 13 positive lymph nodes.

We report here the results of four published studies as well as our institutional experience on the FDG-PET evaluation of response to therapy for colorectal cancer. In the published literature, the details of radiation therapy, including the integration of PET data into treatment planning and its impact on field design, are not described.

A prospective analysis of primary rectal cancer response to preoperative chemoradiation therapy was first described by Guillem and colleagues.18 Twenty-one patients with T3 and/or N1 disease were treated with 5-fluorouracil and leucovorin in conjunction with radiation to 50.4 Gy. Pre-treatment and post-treatment PET-CT scans were compared with pathologic results. Of the 15 patients who ultimately underwent resection, all demonstrated a pathologic response to treatment, which was confirmed in 100% of PET and 78% of CT scans. Moreover, PET correctly estimated the degree of pathologic response in 60% of patients whereas CT was successful in 22% of cases.

Oku and colleagues compared pre-radiation and post-treatment FDG-PET scans in 40 patients who received preoperative radiation therapy alone to doses of 50 to 60 Gy.19 The mean standardized uptake values (SUV) of the first (SUV1) and second (SUV2) scans were compared and correlated with histopathologic findings. There was no relationship between SUV1, SUV2 or SUV2/SUV1 and histologic differentiation, presence of microscopic residual disease, angiolymphatic invasion, and involvement of lymph nodes at the time of surgery. There was, however, a statistically significant relationship between SUV2 and disease recurrence (p < 0.05). Receiver operator characteristic (ROC) curve analysis revealed an SUV cutoff between 3.11 and 3.16 was associated with a favorable prognosis.

Capirci and colleagues analyzed 81 patients with stage II-III rectal cancer who were treated with preoperative chemoradiation therapy.17 PET scans were not used in the initial staging workup. Radiation dose was 56 Gy and delivered in a shrinking field technique. FDG-PET scans were performed 1 month post-treatment and surgery occurred 4 weeks later. PET showed 79% specificity in identifying a pathologic complete response, 45% sensitivity, 77% positive predictive value, and a 43% negative predictive value. The total accuracy was 56% and there was a significant correlation between PET and pathologic stage (p < 0.01) and tumor regression grade (p < 0.01).

Calvo and coworkers analyzed 25 patients with T2-T4NxMo rectal cancer and studied the impact of FDG-PET in initial staging and in the evaluation of tumor changes caused by preoperative chemoradiation.20 Preoperative chemoradiation significantly decreased the mean SUVmax from 5.9 (initial mean SUVmax) to 2.4 (mean SUVmax after chemoradiation, p < 0.001). Unknown liver metastases were detected by FDG-PET in two patients; in one of them with the initial staging FDG-PET scan, and with the restaging FDG-PET scan in the other. After an average follow-up of 39 months, the value of SUVmax ≧6 predicted for survival at 3 years: 92% vs. 60% (p = 0.04). T stage downstaging (total 62%) was significantly correlated with SUVmax changes: 1.9 vs. 3.3 (p = 0.03).

At our institution, we sought to analyze the clinical impact of PET-CT fusion on the radiation therapy planning and management of patients with rectal and anal primaries. Specifically, we compared the size of tumor volumes on CT to PET scans, the correlation in overlap between both sets of images, and the influence of PET-CT on the radiation treatment fields and overall management of patient care. Twenty-three patients underwent PET-CT fusion scans as part of the initial treatment planning process. Twenty patients (87%) were diagnosed with rectal cancer and were treated with preoperative chemoradiotherapy while 3 patients (13%) received definitive chemoradiation for tumors of the anus. Table 7-1 describes demographic information on all patients. Thirteen (56.5%) patients were male and the mean age was 58 years with a range of 30 to 81 years. Of the patients with rectal primaries, 12 patients (60%) were staged T3N0 (IIA); 2 (10%) were T4N0 (IIB); and 3 (15%) were T3NxM1 (IV). Of the 3 remaining patients, 1 each (5%) was classified as T3N1 (IIIB), T2N2 (IIIC), and TxNxM1 (IV). Two patients (67%) with cancer of the anus were staged as T3N0 (II) while the third (33%) was staged T3N2 (IIIB). Seventeen patients (74%) were treated at a county hospital and 6 (26%) at a private institution.