(a, b) Cerebral edema. Noncontrast axial CT image of the brain shows diffuse hypodensity in the brain parenchyma, with loss of the gray-white interface compatible with brain edema. Extra-axial high attenuation (arrowheads) has the appearance of subarachnoid hemorrhage but is simply secondary to brain swelling

The pathologic cause of the increased cisternal density is not definitively known, but is postulated to be secondary to a combination of factors, including displacement of normally hypodense cerebrospinal fluid, engorgement of the superficial vasculature, and the edematous and hypodense adjacent brain [1].

Patients found unresponsive and brought for acute neuroimaging can have a whole host of imaging findings, some subtle and others obvious. Carbon monoxide poisoning is one potentially subtle imaging finding which, if detected early, can significantly improve the clinical prognosis of the patient.
Carbon monoxide poisoning is a typically symmetric anoxic encephalopathy, with a much higher affinity for hemoglobin than oxygen. Cerebral injury has a predilection for the globi pallidi (Fig. 16.2) [2]. The cerebral white matter may or may not be also involved, depending the duration of exposure. If diagnosed within 6 h on initial injury, long-term neuropsychiatric morbidity can be curtailed. Standard treatments include hyperbaric oxygen and 100 % oxygen. 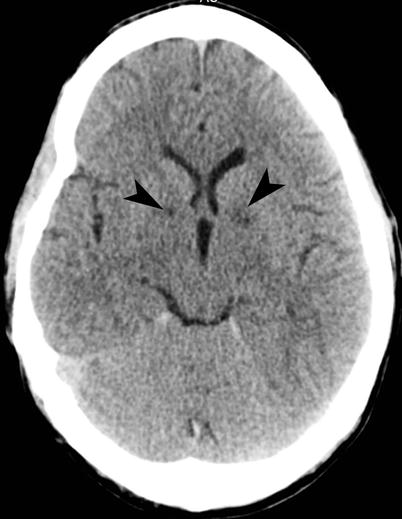 Carbon monoxide poisoning. Noncontrast axial CT image of the brain shows subtle areas of decreased attenuation in bilateral globi pallidi (arrowheads), compatible with ischemic injury in the setting of carbon monoxide poisoning
Differential considerations include Creutzfeldt-Jakob ­disease, Wilson’s disease, and Leigh syndrome, all entities which can affect the globi pallidi, although all of these have more widespread gray matter involvement than CO poisoning.

Cerebral abscesses are typically located at the corticomedullary junction and have thin, regular capsule formation that appears hypointense on T2-weighted images. The causes of brain abscess include bacterial, fungal, or tuberculosis. The disease evolves from an early cerebritis and extensive T2 signal intensity abnormality to liquefaction and capsule formation.
The medial temporal lobe involvement by focal process can be from arterial ischemia, which originates from the PCA territory; pyogenic infection, which can arise from otogenic infection; and herpes encephalitis, which has a predilection for the hippocampal formation [3]. If the focal abnormality involves the lateral temporal lobe, MCA territory arterial ischemia should be considered. If the edema involves the entire temporal lobe, one has to consider tumor. If otogenic infection is left untreated, there can be dural breech, leading to empyema, cerebritis, and abscess formation (Fig. 16.3).

Intracranial infection: brain abscess, ventriculitis, meningitis, and neurocysticercosis. (a) FLAIR sequence demonstrates left frontal brain abscess (arrowhead) from fungal infection with surrounding edema. The wall of the abscess is thinner on the medial aspect, a feature of brain abscess which is the result of limited vascular supply on the medial aspect. (b) Noncontrast axial CT image of the brain shows confluent decreased attenuation (arrowhead) in the left temporal lobe, from a combination of abscess and edema (arrow). Bone windows at the same level shows fluid in mastoid air cells (arrowhead). (c, d) Contrast-enhanced T1-weighted MRI shows extensive ependymal enhancement of the ventricular wall (arrowheads). There is also enhancement of the basal cisterns (curved arrows). The defect seen in the right parietal bone is from a ventriculostomy catheter which had become infected and was taken out. (e, f) T1-weighted sequence demonstrates multiple spherical parenchymal neurocysticercosis (arrowheads) containing scolex, at the gray-white matter junction. Postgadolinium T1-weighted (f) sequence shows rim enhancement of the multiple cystic lesions in the supratentorial compartment
Parasitic infection, such as neurocysticercosis, paragonimiasis, and echinococcus infection, should be considered when there is history of travel to an endemic region. Neurocysticercosis is the most common parasitic infection involving the central nervous system in developing countries and is endemic to Mexico, South America, Africa, Eastern Europe, and Asia. The neurocysticercosis involving the central nervous system is of four types:

While the meningeal cysts form mostly in the basal meninges, parenchymal cysts are usually found in the ­cerebral cortex. The white matter is rarely involved. Ventricular cysts are seen in 15 % of patients with neurocysticercosis, most commonly involving the fourth ventricle. In approximately nine fifths of cases of ventricular disease, there is associated parenchymal involvement.
Parenchymal neurocysticercosis is typically seen as 1 cm (range, 4–20 mm) diameter spherical shape lesion with a 2–3 mm mural nodule produced by the scolex. The presence of surrounding edema and enhancement of capsule indicates that the parasite is in degenerative or colloidal state. On T1-weighted sequence, the fluid in the cystic lesion is hypointense to white matter and hyperintense to cerebrospinal fluid. On T2-weighted sequence the cystic fluid is markedly hyperintense. There is usually no enhancement in the earlier vesicular stage, when the larva is still viable and the cyst is antigenically inert. In nodular calcified stage, cystic lesion is calcified and does not show any enhancement.

Herpes simplex virus infection is ubiquitous in the general population, usually contracted initially via oronasopharyngeal contact. The virus then lies dormant within the trigeminal ganglion. HSV encephalitis is the most common viral infection in the central nervous system. What precipitates viral reactivation in the CNS is not known, although some patients have been found to have a viral prodrome prior to full manifestation [4]. Patients usually present with fever and a gradual onset of altered mental status, over the course of a few days. Infrequently are there focal neurological signs.
Fortunately, there are many imaging features for HSV encephalitis that are characteristic. The limbic system is a characteristic location (Fig. 16.4). It can be bilateral, usually asymmetric. Enhancement is typically gyriform. Restricted diffusion is often seen in the limbic system. Hemorrhage is a late feature. If a patient has these features, a presumptive diagnosis of herpes encephalitis should lead the clinical team to start IV acyclovir, as prompt antiviral therapy has been shown to improve outcomes.

Tension pneumocephalus, a serious and potentially life-threatening condition, is due to increased air pressure in the subdural space causing mass effect on the frontal lobes and leading to neurological deterioration. The pathogenesis is described as a ball and valve mechanism. There is communication of the extracranial and intracranial spaces with ingress of air intracranially due to lower intracranial pressure and that the egress of air is blocked by an obstruction. Most cases occur due to head trauma but tension pneumocephalus can also occur due to skull base surgery, paranasal sinus surgery, CSF shunting, evacuation of a subdural hematoma, or posterior fossa surgery.
Patients with tension pneumocephalus often have headache and, most importantly, a diminishing level of consciousness. Imaging findings are characteristic, but not pathognomonic: prominent bifrontal subdural air collections that cause a mass effect on both frontal lobes, with widening of the interhemispheric spaces between the frontal lobes (Mt. Fuji sign) (Fig. 16.5) [5, 6]. 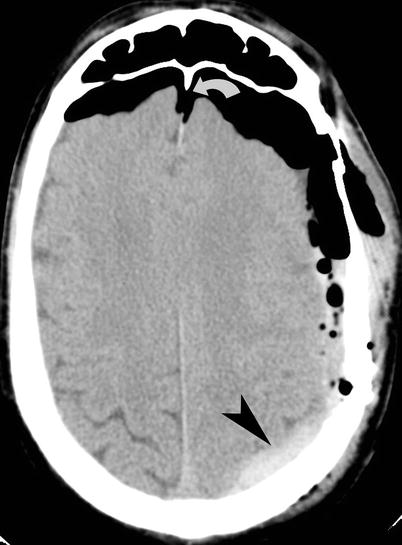 Tension pneumocephalus. Noncontrast CT of the head shows prominent bifrontal subdural air collections with mass effect on both frontal lobes and widening of the interhemispheric space (Mt. Fuji sign) (curved arrow). A hyperdense left-sided subdural hematoma (arrowhead) is seen over the left parietal lobe
If a patient who has had recent surgery has this imaging appearance and is clinically deteriorating, a diagnosis of tension pneumocephalus should be highly considered. Treatments include burr hole placement, craniotomy, needle aspiration, and closure of dural defects.

Giant intracranial aneurysms are aneurysms that have a diameter greater than 2.5 cm. Most giant aneurysms are saccular rather than fusiform [7]. They tend to occur at branch points, arising de novo in defects in the intima or arising from enlarging smaller aneurysms due to hemodynamic stress. While ruptured giant aneurysms have typical symptoms of the “worst headache of my life,” unruptured giant aneurysms have a sinister clinical presentation, often presenting due to mass effect on the adjacent structures or due to thromboemboli. Any large hyperdense mass in the vicinity of the cisterns and subarachnoid spaces should at least raise the possibility of a cerebral aneurysm (Fig. 16.6). Aside from size, other imaging features of giant cerebral aneurysms are rim calcifications, a laminated and adjacent parenchymal hypodensity due to edema from pulsation.

MCA aneurysm. (a) Noncontrast axial CT image of the brain demonstrates a heterogeneously hyperdense lesion (arrow) in the right sylvian cistern with edema within the right temporal lobe. (b) Coronal CTA image shows a 4.5 cm diameter, partially thrombosed aneurysm (arrowhead) arising off the M2 segment of the right MCA. (c) Axial T1-weighted images with contrast show pulsation artifacts (curved arrows) in the phase-encoding direction, indicative of a high-flow process in the aneurysm

Spontaneous intracranial hypotension is characterized by low CSF pressure and postural headaches in the absence of prior trauma, surgery, or lumbar puncture [8]. It is usually due to an occult CSF leak from small meningeal defects. Clinical presentation is a new onset of headache with prompt and striking relief of pain in the supine position and recurrence of pain in the sitting or standing position. Headache may be associated with nausea, vomiting, vertigo, blurred vision, photophobia, neck stiffness, and occipitocervical pain with neck flexion. Imaging findings on CT or MR brain imaging include bilateral subdural hematomas, diffuse pachymeningeal enhancement, caudal displacement of the cerebellar tonsil and brainstem, decreased size of the ventricles and basal cisterns, and enlargement of the pituitary gland (Fig. 16.7) [9]. The condition is generally self-limited but treatment of associated subdural hematoma or headaches may be needed. Persistent headaches may be treated with the use of autologous epidural blood patch if conservative measures fail.