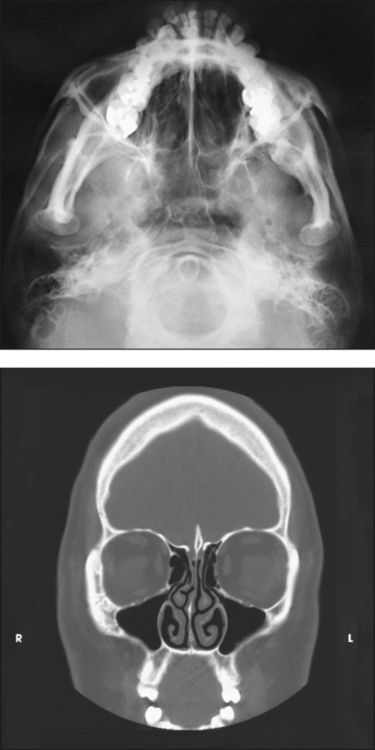 Icons in the Essential column indicate projections frequently performed in the United States and Canada. Students should be competent in these projections.

The air-containing cavities situated in the frontal, ethmoidal, and sphenoidal bones of the cranium and the maxillary bones of the face are called the paranasal sinuses because of their formation from the nasal mucosa and their continued communication with the nasal fossae (Figs. 22-1 and 22-2). Although the functions of the sinuses are not agreed on by all anatomists, these cavities are believed to do the following: 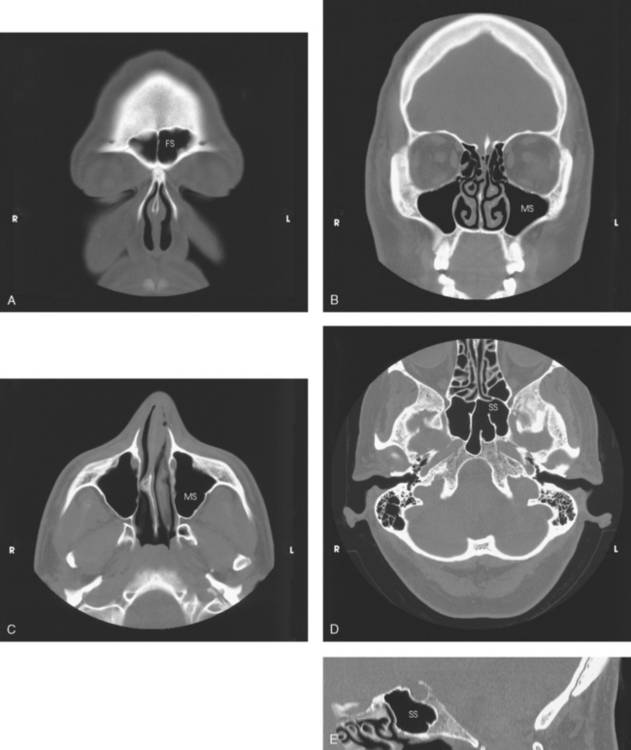 • Serve as a resonating chamber for the voice

• Decrease the weight of the skull by containing air

• Act as shock absorbers in trauma (as airbags do in automobiles)

The sinuses begin to develop early in fetal life, at first appearing as small sacculations of the mucosa of the nasal meatus and recesses. As the pouches, or sacs, grow, they gradually invade the respective bones to form the air sinuses and cells. The maxillary sinuses are usually sufficiently well developed and aerated at birth to be shown radiographically. The other groups of sinuses develop more slowly; by age 6 or 7 years, the frontal and sphenoidal sinuses are distinguishable from the ethmoidal air cells, which they resemble in size and position. The ethmoidal air cells develop during puberty, and the sinuses are not completely developed until age 17 or 18 years. When fully developed, each of the sinuses communicates with the others and with the nasal cavity.

An understanding of the actual size, shape, and position of the sinuses within the skull is made possible by studying the sinuses on computed tomography (CT) head images (see Fig. 22-2).

The largest sinuses, the maxillary sinuses, are paired and are located in the body of each maxilla (see Figs. 22-1 and 22-2). Although the maxillary sinuses appear rectangular in the lateral image, they are approximately pyramidal in shape and have only three walls. The apices are directed inferiorly and laterally. The two maxillary sinuses vary considerably in size and shape but are usually symmetric. In adults, each maxillary sinus is approximately 1½ inches (3.5 cm) high and 1 to 1⅓ inches (2.5 to 3 cm) wide. The sinus is often divided into subcompartments by partial septa, and occasionally it is divided into two sinuses by a complete septum. The sinus floor presents several elevations that correspond to the roots of the subjacent teeth. The maxillary sinuses communicate with the middle nasal meatus at the superior aspect of the sinus.

The two ethmoidal sinuses are located within the lateral masses of the labyrinths of the ethmoid bone. They are composed of a varying number of air cells that are divided into three main groups: anterior, middle, and posterior (see Figs. 22-1 and 22-2). The anterior and middle ethmoidal cells range in number from two to eight, and each group opens into the middle nasal meatus. The posterior cells range in number from two to six or more and drain into the superior nasal meatus.

Please refer to Chapter 20 for a summary of pathology for this chapter.

*kVp values are for a three-phase, 12-pulse generator or high frequency.

†Relative doses for comparison use. All doses are skin entrance for average adult at cm indicated. 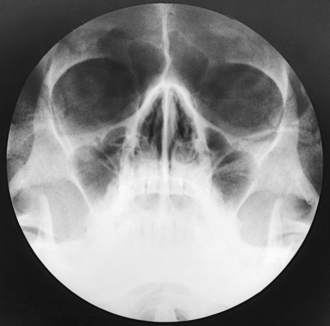 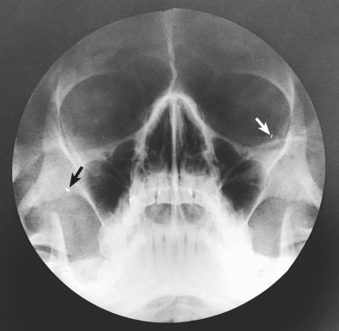 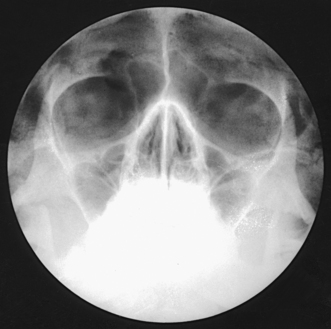 Depending on the technique employed, the milliampere-second (mAs) and kilovolt (peak) (kVp) factors should be balanced so that soft tissue structures and bony structures are shown. Although good contrast is desirable, soft tissue areas may not be visualized with high contrast.

Whenever possible, radiographs of the paranasal sinuses should be made with the patient in the upright position. This position is best for showing the presence or absence of fluid and differentiating between fluid and other pathologic conditions. The value of the upright position in sinus examinations was pointed out by Cross1 and Flecker.2

The paranasal sinuses vary not only in size and form but also in position. The cells of one group frequently encroach on and resemble those of another group. This characteristic of the sinuses, together with their proximity to the vital intracranial organs, makes accurate radiographic demonstration of their anatomic structure of prime importance. The patient’s head must be carefully placed in a sufficient number of positions so that the projections of each group of cavities are as free of superimposed bony structures as possible. The radiographs must be of such quality that it is possible to distinguish the cells of several groups of sinuses and their relationship to the surrounding structures.

Unless sinus radiographs are almost perfect technically, they are of little diagnostic value. For this reason, a precise technical procedure is necessary in radiography of the paranasal sinuses. The first requirements are a small focal spot and clean imaging screens that have perfect contact. The radiographic contrast must similarly distinguish the sinuses from the surrounding structures. The head must be carefully positioned and rigidly immobilized, and respiration must be suspended for the exposures. 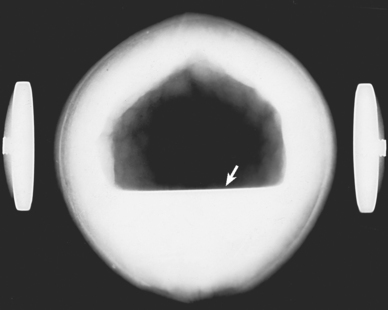 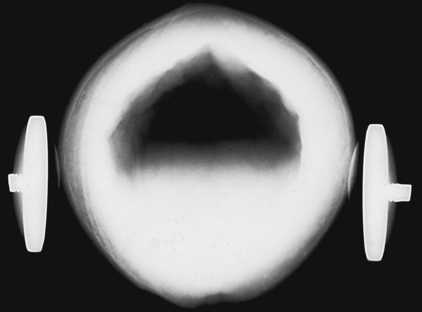 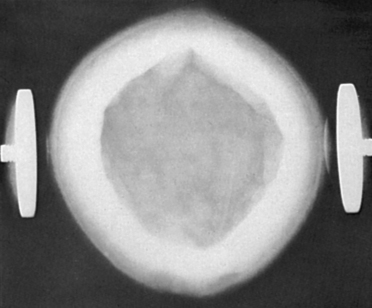 Exudate contained in the sinuses is not fluid in the usual sense of the word but is commonly a heavy, semigelatinous material. The exudate, rather than flowing freely, clings to the walls of the cavity and takes several minutes, depending on its viscosity, to shift position. For this reason, when the position of a patient is changed or the patient’s neck is flexed or extended to position the head for special projections, several minutes