Pelvic congestion syndrome (PCS) was first described in 1857 and was associated with chronic pelvic pain in 1949.1,2 Despite this history, PCS is a condition that is often not considered during the evaluation of a patient with chronic pelvic pain. Even when it is considered, PCS is a condition that is difficult to diagnose. This does not diminish its importance, however, because PCS is a condition that causes distress to a significant number of women. There are many options for treating PCS; some are more successful than others, but none are completely successful. In this respect, embolotherapy is no different but the results of endovascular treatment are at least equivalent to those of surgery and better than conventional medical therapy.

Chronic pelvic pain accounts for up to 40% of female patients attending gynecology outpatient clinics and is said to occur in 15% of all women between the ages of 18 and 50 years.3 Fifteen percent of all hysterectomies and 35% of diagnostic laparoscopies are performed to diagnose and treat patients with chronic pelvic pain.4 Many of these patients will undergo clinical and ultrasound examinations that are normal and will ultimately get better without any intervention.3 However, approximately one-third of these patients will have endometriosis and another third will have some other structural abnormality of the fallopian tubes, bowel, or bladder. It is important that these significant pathologies are excluded before a diagnosis of PCS is considered. The diagnosis of PCS should be on every gynecologist’s list of causes of chronic pelvic pain, but unfortunately often it is not.

Pelvic congestion syndrome has a mixed etiology. The demands made on venous return by the constant hormonal changes associated with pregnancy leads to variable increases in intraluminal pressure. This can ultimately result in weakening of the ovarian vein walls and valvular incompetence. In some patients, there is a congenital absence of valves in the ovarian veins. These conditions can all result in reflux of blood down the ovarian vein into the tributaries of the internal iliac veins within the pelvis. This occurs more frequently on the left than the right because of the anatomic configuration of these veins.

The left ovarian vein drains into the left renal vein, which then takes a roughly perpendicular course to drain into the inferior vena cava. The right ovarian vein usually drains directly into the inferior vena cava, just below the right renal vein. The resulting congestion of the infundibulopelvic and broad ligaments leads to swelling and engorgement, which, in part, leads to the pain experienced by the patient. However, it is not just the physical blood volume and back pressure that causes the pain: venous ischemia, both in the vessel wall and the end organ also plays a role and most interestingly the stretching and shear stress on the inner surface of the ovarian vein distorts both the endothelial and the smooth muscle cells that respond by releasing vasodilator substances. These include neuropeptide transmitters such as substance P and the neurokinins A and B.5 The nutcracker syndrome has a different etiology and implications and is discussed separately.

One of the reasons why a diagnosis of PCS is often not considered is because it can present with a variety of symptoms (Table 16.1). These findings tend to be nonspecific and are therefore potentially indicative of several of the conditions that can cause chronic pelvic pain. PCS occurs most often in women who are multigravida and in their 20s and 30s. It classically presents with pelvic pain or a postcoital ache that is worse on the left side, may last for hours or days, and may be relived by lying down. The pelvic fullness experienced by these patients can be acute and severe or chronic and dull. It can be unilateral or bilateral. These symptoms, when combined with ovarian point tenderness, are said to be 94% sensitive and 77% specific for pelvic congestion syndrome.6 Such specificity and sensitivity figures indicate that women do have a variety of other symptoms including pain brought on by increased intraabdominal pressure, bladder irritability (which occurs in 24 to 45% of all patients), functional gastrointestinal (GI) symptoms (such as constipation), and low back pain. A history of varicose veins and associated vulval varicosities is often present in patients with PCS. Other features on physical examination that may point to the diagnosis include cervical motion tenderness and an engorged blue-looking cervix.


Women with PCS are often described as being depressed and anxious. This is partly due to the fact that they have very real symptoms, which are chronic and potentially debilitating. In addition, they have often gone through an extensive diagnostic workup and in many cases, the cause for their discomfort is difficult to find. There are also good pharmacologic and physiologic reasons why these patients might be suffering from psychological stress. Substance P and the neurokinins A and B, released in response to stretching by endothelial and smooth muscle cells described earlier, play a key role in the regulation of emotions and are an integral part of central nervous system pathways involved in psychological stress.

Following the performance of a detailed history and physical examination, most patients presenting with chronic pelvic pain will undergo some type of imaging evaluation. This most commonly includes an ultrasound examination and laparoscopy. Sonographic findings of pelvic congestion syndrome include a dilated left ovarian vein with reversed caudal flow, dilated arcuate veins crossing the uterine myometrium, polycystic changes of the ovary, and variable duplex waveform during a Valsalva maneuver.7 Computed tomography (CT), magnetic resonance imaging (MRI), and magnetic resonance angiography (MRA) (Fig. 16.1) can all aid in the diagnosis of PCS, but in all of these investigations the patient is likely to be supine. Therefore, although all of these studies may demonstrate venous engorgement in the pelvis in severe cases, in less severe cases this same venous engorgement might not be seen, which will result in a false-negative examination.8 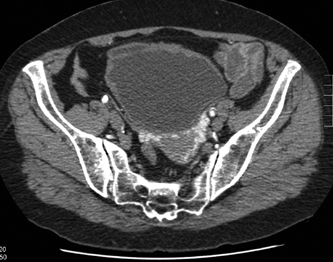 Fig. 16.1 Contrast-enhanced computed tomography scan of the pelvis in a woman with chronic pelvic pain demonstrates multiple enlarged varicosities around the uterus. She responded well to endovascular treatment.

Cross-sectional imaging studies remain important because they may reveal associated abnormalities that suggest a diagnosis of PCS. For instance, polycystic ovaries may be found on ultrasound and these are associated with pelvic congestion syndrome in 56% of patients. Similarly, imaging may reveal an increase in uterine cross-sectional area and an endometrial thickness, which is marginally greater than normal. On CT, these findings may cause confusion with adenomyosis. None of these imaging modalities, however, should be considered as a primary tool for diagnosing PCS.

Presently, ovarian venography remains the definitive modality for evaluating patients for PCS (Fig. 16.2). Ideally, a percutaneous venogram should be performed on a tilting table so that the patient is partially upright during the examination. This will maximize the ability of venography to detect reflux and perhaps address the false-negative cases seen on cross-sectional imaging or laparoscopy performed in the supine position. Ovarian venography can be performed from a jugular or femoral vein approach. The jugular vein is often preferred because the angles favor selective catheterization of the ovarian veins from this approach. In addition, it is preferred by many if embolization is being considered at the same sitting for the same reason. Selective catheterization of the left renal vein (LRV) can usually be performed with 4 French cobra or multipurpose catheters. The same catheters can be used to catheterize the right ovarian vein (ROV), though a sidewinder is often required if the study is being performed via femoral vein access. The LRV should be catheterized first because it is typically more straightforward and often has the greatest yield for a positive finding. 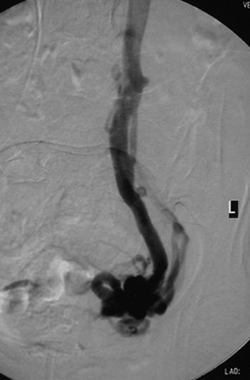