It is still true that pregnancies with a lower rate of rise of β-hCG are more likely to fail. On the other hand, a normal rise does not necessarily guarantee the pregnancy will be normal. Up to 30 % of ectopic pregnancies mimic the β-hCG trend of an IUP. Therefore, rising β-hCG alone has a poor sensitivity and specificity for diagnosing ectopic pregnancy, and visual confirmation of pregnancy location is necessary [16, 17]. Condous and Kirk have advocated the use of a β-hCG ratio as a more reliable indicator of pregnancy viability for non-visible pregnancies (see Table 24.2) [18, 19]. It is important to note that this anticipated rise only applies if β-hCG is <2,000 mIU/ml, as above this level the rise is less predictable.

Adapted from Refs. [18, 19]
To assist in the diagnosis of abnormal pregnancy, Kadar proposed the use of a “discriminatory zone,” the β-hCG concentration above which the gestational sac of an intrauterine pregnancy should be identified on ultrasound. His study of 53 women found that at β-hCG ≥6,000–6,500 mIU/ml, a transabdominal ultrasound (TAU/S) was consistently able to detect the gestational sac, though not necessarily the fetal pole or cardiac activity, of an IUP. Below β-hCG of 6,000 mIU/ml, seeing an intrauterine gestational sac would not be anticipated [14]. With the advent of TVU/S with improved resolution due to a higher-frequency probe and less dependence of maternal body mass index for adequate visualization, the discriminatory zone has been lowered to 1,500–2,000 mIU/ml. [20–22] A more recent retrospective cohort study by Connolly reevaluated the discriminatory zone in 1,015 women presenting with vaginal bleeding, pain, or both in the first trimester of pregnancy. Using the higher-frequency 8–9-MHz TVU/S probe, the discriminatory zone for detection of the gestational sac, yolk sac, and fetal pole was 2,317, 9,975, and 35,486 mIU/ml, respectively [23]. The value for the gestational sac is higher than previously reported values. Additionally, this is the first report of a discriminatory zone for the yolk sac and fetal pole. This study also found a lower than previously reported threshold β-hCG for visualization of the gestational sac, 390 mIU/ml. The threshold values for yolk sac and fetal pole visualization were 1,094 and 1,394 mIU/ml, respectively, in viable pregnancies [23]. And as sonographic technology changes, the discriminatory zone and minimal threshold values will continue to evolve.
The American College of Radiology emphasizes that the discriminatory zone should not be taken as an absolute. Failure to visualize a pregnancy with a β-hCG above the discriminatory zone does not necessarily mean the pregnancy is abnormal. The ability to visualize a pregnancy at a very early gestation is influenced by factors such as ultrasound resolution, sonographer experience, maternal body habits, uterine orientation, and fibroids. [23] Additionally, pregnancies with structural or chromosomal anomalies, multifetal gestation, or those complicated by ovarian hyperstimulation syndrome may have a β-hCG above the discriminatory zone while being too early to visualize on ultrasound [23, 24]. Pregnancies complicated by ovarian hyperstimulation syndrome will initially have a high β-hCG due to hemoconcentration; levels then appear to plateau as post-hydration hemodilution sets in [25]. Therefore, it is important to correlate clinical age based on LMP or known date of conception with the β-hCG level and patient symptoms to avoid iatrogenic compromise of a potentially normal pregnancy.
If the β-hCG is below the discriminatory zone in an asymptomatic patient, TVU/S will rarely be diagnostic and therefore should not be ordered as its clinical utility and cost-effectiveness is low. TVU/S is clinically useful in a symptomatic patient with bleeding or pelvic pain even if the β-hCG is below the discriminatory zone as a life-threatening ectopic pregnancy or abortion may be diagnosed. An ectopic pregnancy can often be visualized below the discriminatory zone as ectopic pregnancies usually do not follow the normal β-hCG curve. Therefore, the ectopic pregnancy may be further along than suggested by the β-hCG. If the ultrasound is nondiagnostic and the patient is stable with no other symptoms, serial β-hCG levels can be obtained every 2 days until the discriminatory zone is reached or the location of the pregnancy becomes clinically apparent. This more conservative approach of waiting for a ultrasonographic diagnosis of ectopic in a stable patient rather than making ectopic a diagnosis of exclusion by empty uterus with positive β-hCG can save numerous normal pregnancies from iatrogenic termination [24]. If clinical suspicion for ectopic pregnancy is high, one can admit the patient to the hospital for serial abdominal exams and hemodynamic monitoring. Alternatively, if concerned for tubal rupture and hemoperitoneum, it is advisable to proceed directly to surgery even prior to obtaining a TVU/S as a ruptured ectopic can lead to exsanguination as is the cause of 6 % of all pregnancy-related deaths [26].

Although serum progesterone and other hormones have been studied extensively in early pregnancy, they are rarely helpful and bring little management assistance in this clinical setting as compared to β-hCG and TVU/S.

Sonography offers the clinician a consistent and reliable way to visualize the pelvic organs and aid in the diagnosis of early pregnancy and its complications. The American Congress of Obstetricians and Gynecologists lists indications for a first trimester ultrasound (see Table 24.3) [24].

Based on data from Ref. [30]
A TVU/S uses a higher-frequency probe permitting visualization of pregnancy at an earlier gestation, as early as 4.5–5 weeks [23]. Additionally, the exam is less likely to cause iatrogenic distortion of the gestational sac as the bladder is empty and transducer pressure is not required [27]. Therefore, whenever TAU/S is not definitive, a TVU/S should be performed. The initial ultrasound should evaluate the pregnancy location and presence of a gestational sac, yolk sac, and fetal cardiac activity and measure the embryonic pole with crown rump length (CRL) to estimate gestational age. The accuracy of the ultrasound varies depending on quality of ultrasound equipment, sonographer experience, maternal body habitus, and obstructing pelvic organs such as fibroids or ovarian masses [28]. 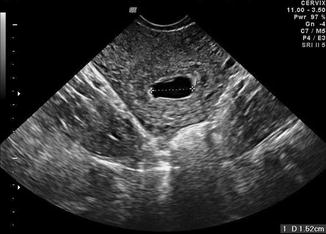 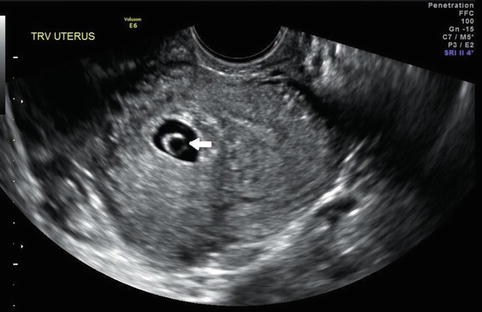 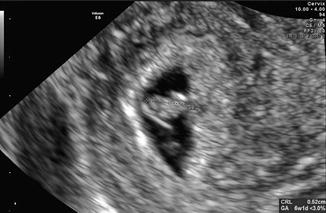 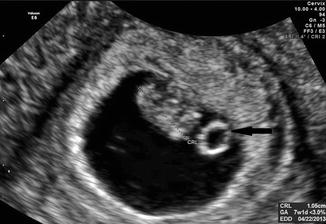 Fetal pole (measured CRL) and yolk sac (black arrow)
The presence of fetal cardiac activity confirms pregnancy viability (Fig. 24.6). The mean heart rate increases from 110 to 175 beats per minutes (bpm) from 5 to 9 weeks gestation. Jauniaux reported on a series of 15 studies showing a slow fetal heart rate, less than 80 bpm, is associated with increased risk of miscarriage. The greatest risk of spontaneous abortion is a gradually decreasing rather than increasing fetal heart rate [33]. Though there is some variation of normal embryonic growth, if the pre-specified criteria are not met (Table 24.4), the diagnosis of early pregnancy failure can be made with confidence. 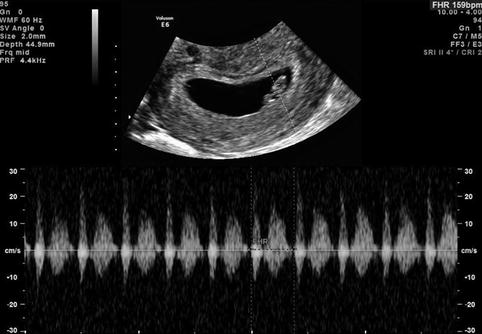 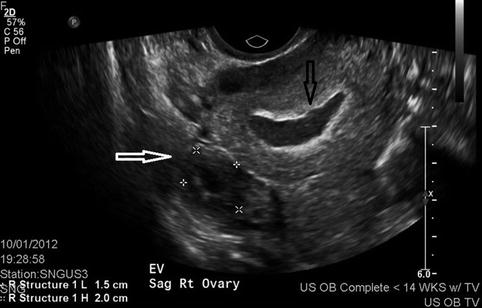 Fig. 24.7
Only gold members can continue reading. Log In or Register to continue