The Normal Ovary (Changes in the Menstrual Cycle)

Transvaginal image of ovary with the corpus luteum, note the iliac vessels 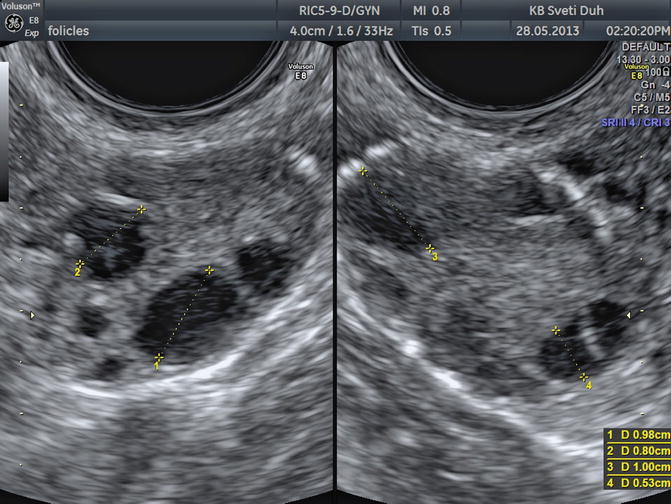 Transvaginal image of both ovaries in early first phase

In fertile women ovaries are usually easily visualized because they are relatively big and have follicles and/or corpus luteum, structures that are easy to recognize using transvaginal ultrasound. The average size of the ovaries in premenopausal women is 3.5 × 2.5 × 1.5 cm (length × height × width) and in postmenopausal women is 2.0 × 1.5 × 1.0 cm. In order to measure, it is important to visualize the ovary in the frontal and sagittal plane. Three dimensions could be obtained, and the volume can be calculated using the ellipsoid formula (V = 4/3 × 3.14 × (D1/2 × D2/2 × D3/2)) [3] or the simplified ellipsoid formula (V = 1/2 × length × height × width). Difficulties in the visualization of normal ovaries can be caused by extreme cranial position of the ovary or in case of severe adhesions in the pelvis.

Before, sexarche ovaries can be visualized by transabdominal ultrasound using the full bladder technique or by transrectal approach using the transvaginal probe. The images obtained transrectally are quite similar to those obtained transvaginally. In children before 5 years of age, ovaries have a volume of less than 1 cm. Before puberty ovaries are small hypoechoic structures that measure less than 2 cm in diameter. Few years before menarche small anechoic structures with sharp borders measuring 5–9 mm can be visualized, indicating the start of folliculogenesis.
In the years of adolescence, until the hypothalamus-hypophysis-ovary axis is not fully mature, ovaries are visualized with the variety of growing follicles of different sizes. Anovulation is common, and these large ovaries with a lot of follicles can often be misdiagnosed as polycystic ovaries.

Changes in the morphological appearance of the ovary which can be detected by ultrasound come due to rhythmic changes in the secretion of female hormones FSH and LH. Ovaries pass through the menstrual cycle, in which we distinguish follicular phase, ovulation, and luteal phase. Ultrasound provides insight into the psychological changes during the ovarian cycle and allows accurate and reproducible investigations of follicular size, development, and growth during the follicular phase [5].
Newborn girl has two million follicles and before puberty 300,000 follicles are still present. For their development gonadotropins are not required. Since the mid-fetal life until menopause, there is a permanent reduction in the number of follicles, and only 400 (100–1,000) follicles will achieve preovulatory maturation and ovulate until menopause.
The majority of primordial of follicles will go through the process of atresia.
In the first 5 days of the cycle, FSH levels are high in order to stimulate the development of a primary follicle in the ovary. A primary follicle measures 40 μm; it has one layer of granulosa cells and an oocyte. By further growth and multiplication of cells, a preantral follicle is developed. Preantral follicle has a diameter of only 150 μm, and it is not detectable by ultrasound.
Between fifth and seventh day of the cycle, secondary antral follicles can be detected and are presented as anechoic spheroid zones inside the ovary, approximately 2–3 mm in diameter. These are the first follicular structures that may be visualized by common ultrasound devices [5].
With further selection one dominant follicle is being elected while other follicles go into atresia. The dominant follicle can be detected between 8th and 12th day of the cycle when its size and growing pattern are clearly superior to other visualized follicles (Fig. 5.3). The remaining follicles can continue with their growth but just up to 14 mm in diameter. In up to 10 % of maturely menstrual cycles, sonography can detect two dominant follicles [6]. 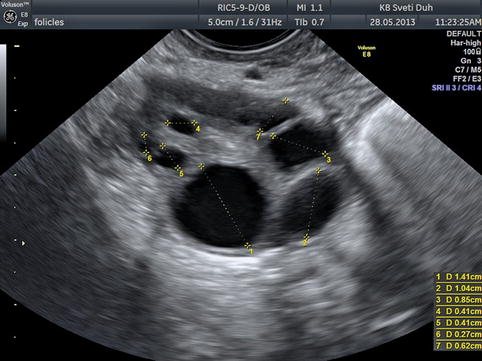 Transvaginal image of a normal ovary in the first phase, note the dominant follicle
The diameter is measured from one internal follicle wall to the other if the follicle is roundly shaped. If we are measuring an oval follicle, we have to measure three distances (the longest, the shortest, and the oblique) and then calculate the median: DF = (D1 + D2 + D3)/3.
The dominant follicle has a linear daily diameter growth of 2–3 mm per day, and at the moment of ovulation, the diameter of the dominant follicle is 18–27 mm [7].
This variety at the time of ovulation limits the use of follicle diameter for ovulation prediction.
In order to predict ovulation serial follicle, measurements have to be done in more than two menstrual cycles in each patient. In the majority of patients, a uniform pattern of morphologic sonographic changes prior to ovulation can be established, and the knowledge of follicle diameter and endometrial thickness and shape can help in infertility procedures during the natural cycle. Unfortunately not all patients have a uniform pattern and ovulate with different sizes of dominant follicles.
Besides follicle diameter other sonographically visualized morphologic changes could help in the detection of ovulation. In more than 20 % of follicles >18 mm, a cumulus oophorus can be visualized and is seen as a small anechoic part in the lumen of the dominant follicle that presents the detachment of granulosa cells containing the oocyte.
Twenty-four hours before the ovulation, a hypoechogenic line surrounding the preovulatory follicle can be visualized; it presents the separation of theca cells from internal granulosa cells. The theca cells are at that time hypervascularized and edematous, and these changes can be even better visualized using color Doppler (Fig. 5.4). 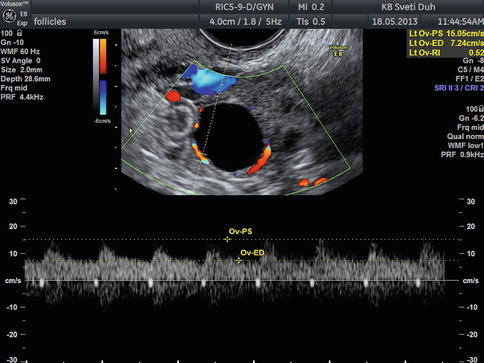 Transvaginal color Doppler image of perifollicular vascularization of preovulatory follicle
Before ovulation the internal wall of the preovulatory follicle can be slightly hyperechoic with irregular internal borders. It is important to always check the endometrium because its thickness and shape correlates with the serum estradiol level and endometrial findings can help in predicting the ovulation.
The key sonographic markers of ovulation are disappearance of or sudden decrease in follicle size (the most frequent sign of ovulation with the sensitivity of 84 %), appearance of ultrasonic echoes in the follicle, irregularity of follicle wall and free fluid in the pouch of Douglas (in 77 % of cases on the day of ovulation) [5, 8], and secretory changes of the endometrium.
After the ovulation the follicle is transformed in corpus hemorrhagicum with internal echoes. The corpus luteum is afterwards created with the vascularization and luteinization of granulosa cells. Sonographic appearance can be variable in size and shape [9]. The size is generally reduced and is visualized as a structure with thick hyperechogenic walls enclosing the hypoechoic center (Fig. 5.1). It is well known that corpus luteum can also look like many pathologic changes of the ovary (endometriosis, cystic teratoma, and other benign or even malignant tumors), and sometimes it is absolutely necessary to perform an ultrasound examination after the menstruation in order to differentiate the possible pathology.
The corpus luteum vanishes before the start of next menstrual cycle, and the presence of corpus luteum 12 or more days after ovulation can be a first sign of pregnancy.

Color Doppler of the Normal Ovary

Transvaginal color Doppler (TVCD) plays an important role in better understanding the physiology of the menstrual cycle. This technique was intensively studied in the beginning of the 1990s, and many studies proved the usefulness in detection of vascular changes in the uterus and the ovary [10–15].
The blood supply of the ovary has two sources: ovarian artery and the ovarian branch of the uterine artery that anastomoses and forms an arch in the ovarian hilus. Color Doppler signals of the uterine artery can be found on the lateral border of the ovary. The impedance indices found in the ovarian artery correlate with the menopausal status. Before menarche and after menopause, the ovarian artery is difficult to visualize because the ovaries are very poorly vascularized at that time. The resistance to blood flow is high and so are the flow indices (RI = resistance index, PI = pulsatility index). During the reproductive age, there is a difference in vascularization depending on which ovary is the dominant follicle growing and where the resistance to blood flow is lower in comparison to the non-dominant side. It is absolutely logic that a growing follicle or the corpus luteum needs more vascularization, and so we register lower flow indices. As ovarian arteries are not easy to find, in order to perform objective measurements in practice, we estimate the intraovarian blood flow that changes during the age and the cycle. Before puberty and after menopause, blood flow should not be detected in the ovaries using color Doppler. Any positive vascularization in that time of life in the ovaries has to raise suspicion about possible pathology of the vascularized ovary [11, 12].

Perifollicular blood flow can be detected when a dominant follicle has a diameter of >10 mm. Few days prior to ovulation, the RI is around 0.54 ± 0.04. Two days before ovulation, the RI starts to decline while at ovulation the RI is 0.44 ± 0.04. The flow velocity is increasing as the RI gets lower, and even if the RI is not changing, the peak systolic velocity rises on the onset of ovulation. Angiogenesis and dilatation of newly formed vessels between the theca and granulosa layer and changes in the follicular wall could be necessary for follicular rupture [13]. In case of luteinized unruptured follicle, a failure of blood velocity to peak in the preovulatory period is observed that proves that adequate vascularization is necessary for achieving ovulation [14].
The vascularization in the polycystic ovaries is detected in the hyperechoic stroma, and waveforms showed mean RI = 0.54 but without cyclic changes caused by hormonal steady state (anovulation). There are also no changes in the Doppler indices in the uterine artery that are usually found in regular menstrual cycles. The vascularization of the uterus and the ovary is hormonally dependent, and Doppler measurements reflect cyclic hormonal changes in the female genital organs.
The perifollicular vascularity is a constant challenge for clinicians and researchers. It is known that it correlates well with the level of follicular oxygenation. Oocytes from severe hypoxic follicles are associated with high frequency of abnormalities in the organization of the chromosomes. Color Doppler analysis of perifollicular blood may provide an indirect sign of the developmental competence of the oocyte [15]. In the stimulated cycles there is a correlation of higher peak systolic velocity (PSV > 10 cm/s) in follicles with subsequent fertilized oocytes [16]. However, in the natural cycles Doppler indices of perifollicular blood flow as predictors of oocyte quality are still of limited value [17]. Three-dimensional reconstruction of power Doppler perifollicular vascular network could be a better predictor for oocyte competence in natural cycles [18, 19].
TVCD is very reliable in confirming ovulation. A marked drop in blood flow indices and rise of blood flow velocities in the early luteal phase are signs of prominent vascularization and corpus luteum formation. Color Doppler findings added to ovarian morphology changes mentioned above accurately confirm ovulation.

TVCD and the Corpus Luteum

The formation of the corpus luteum is a key event in the reproductive life and also plays an important role in early pregnancy support. Immediately after ovulation blood vessels of the theca layer invade the cavity of the ruptured follicle (Fig. 5.5). There is a dramatic increase of the amount of blood flow with increased velocity and low impedance to blood flow. The RI is low (0.43 ± 0.04), remains at the same level for 4–5 days, and then gradually rises to a level of 0.49 ± 0.04, which is still lower than in the follicular phase (Fig. 5.6). 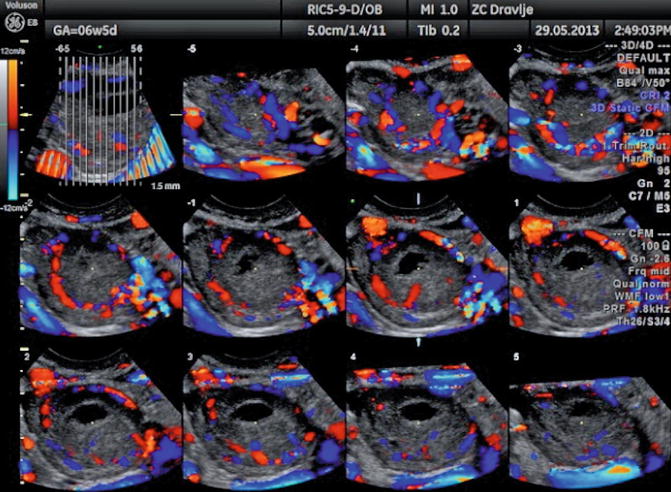 Color Doppler image of vascularization of the corpus luteum 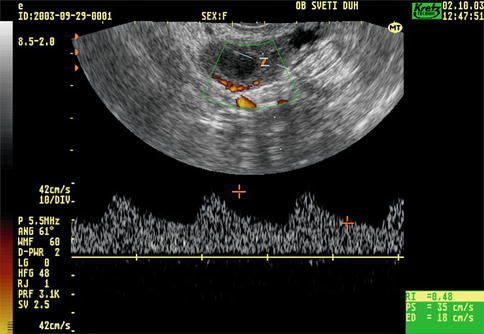 Transvaginal color Doppler image of corpus luteum blood flow
If the pregnancy is achieved, corpus luteum has prominent blood flow with low Doppler indices (RI = 0.45 ± 0.04) and similar vascularization is detected during the 1st trimester. In cases of threatened abortion (p < 0,01), missed abortion (p < 0,01), and incomplete abortion (p < 0,01), the resistance and pulsatility indices are significantly higher than in the normal pregnancy. There is a correlation between vascularization indices of the corpus luteum and hormonal levels of HCG, estradiol, and progesterone.
After the 23rd day of cycle, if there is no pregnancy, the corpus luteum starts its regression. The color flow signals are poor, and the Doppler indices are getting higher until menstruation and the start of the new cycle. At that time there is no color flow detected in the ovary.
Only gold members can continue reading. Log In or Register to continue