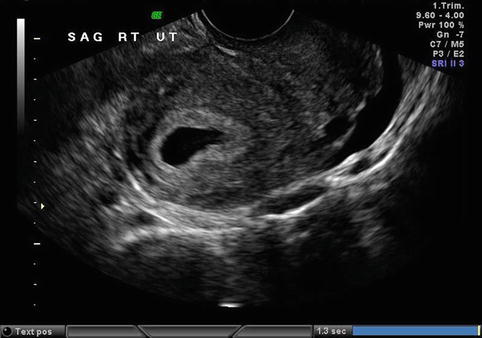 The yoke sac is the first visible structure within the gestational sac and is a distinct circular structure with a bright echogenic rim and sonolucent center (Fig. 25.3) and is recognized 3 weeks post-conception (5 weeks after the last menstrual period). The embryo is first recognized as a thickening along an edge of the yoke sac (Fig. 25.4), and embryonic cardiac motion can be first observed 3 1/2 to 4 weeks post-conception (5 1/2–6 weeks after last menstrual period). When exact pregnancy dating is available, an intrauterine pregnancy, regardless of embryonic number, should be identified within the endometrial cavity with transvaginal ultrasonography by 24 embryonic days or 38 menstrual days (exact 28 day menstrual cycle). This exact pregnancy dating does not rely on human chorionic gonadotropin, hCG, levels. Without such exact pregnancy dating and with no intrauterine pregnancy identified with transvaginal sonography, the “nondiagnostic ultrasound,” a serum level of hCG is needed for ultrasound interpretation [6]. A word of caution, because of the variation in vaginal ultrasound technical and interpretive abilities and lab hCG levels, before embarking on treatment for a presumed ectopic pregnancy, especially with methotrexate, give every pregnancy the “benefit of the doubt.” Be certain of the diagnosis or use diagnostic laparoscopy for confirmation. 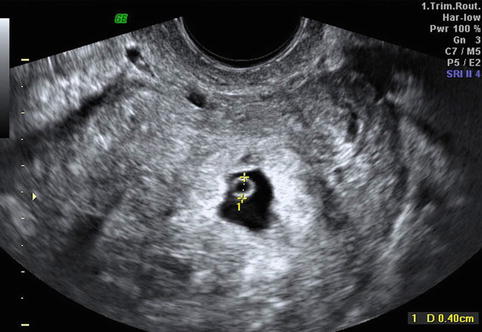 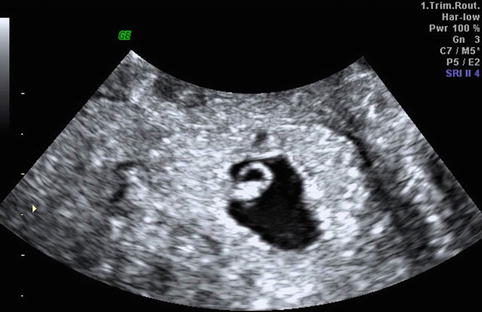 Less than 1 %, and the rarest, of ectopics are implanted within the cervical canal below the level of the internal cervical os [11, 12]. The etiology of such implantations is unknown, but predisposing factors include prior uterine curettage, induced abortion, Asherman’s syndrome, leiomyomata, presence of an intrauterine device, in vitro fertilization, and prior in utero exposure to diethylstilbestrol [13–16].
Before the now common use of early pregnancy transvaginal ultrasound, cervical pregnancies were frequently diagnosed at the time of spontaneous abortion or reached the second trimester, both associated with life-threatening hemorrhage frequently requiring hysterectomy as treatment. Usually, the first complaint is painless vaginal bleeding and speculum examination may reveal an open external cervical os with a fleshy-type endocervical mass presenting. With early transvaginal ultrasound, these implantations are easily identified (Fig. 25.5) and can, thus, be treated with conservative fertility-sparing options. 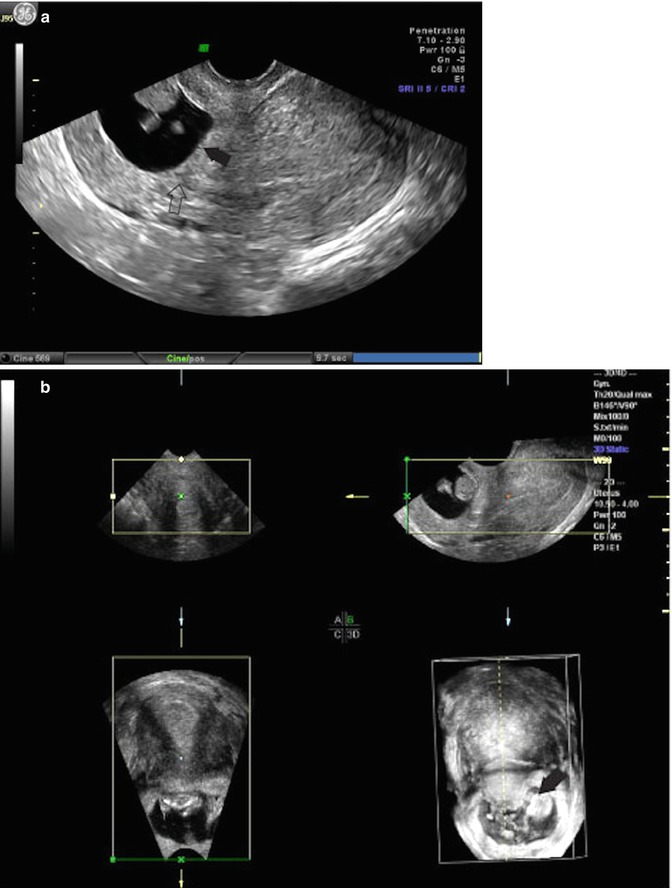 One half of one percent to almost 3 % of ectopics are implanted within the ovary [11, 19]. Ovarian pregnancy like other non-tubal ectopic pregnancies may occur without the usual expected antecedent risk factors for ectopic pregnancy but does seem to have a strong association with conceptions with an intrauterine contraceptive device in place [20, 21]. The presenting signs and symptoms are similar to other ectopic pregnancies: positive pregnancy test, abdominal pain, and vaginal bleeding.
It is difficult to preoperatively make the diagnosis of ovarian pregnancy. An ultrasound finding suggesting ovarian implantation is a walled cystic mass within or adjacent to an ovary, but this does not exclude a corpus luteum and a tubal implantation. Doppler cannot distinguish between a corpus luteum and an ovarian pregnancy implantation (Fig. 25.6). This diagnosis is usually a pathological diagnosis: made by microscopic examination of a surgically removed adnexal mass, via laparotomy or laparoscopy, based on Speigelberg’s criteria: the tube must be intact and distinctly separate from the ovary, the gestational sac must occupy the normal anatomical location of the ovary, the gestational sac must be connected to the uterus by the utero-ovarian ligament, and unquestioned ovarian tissue must be demonstrated in the wall of the gestational sac [22]. 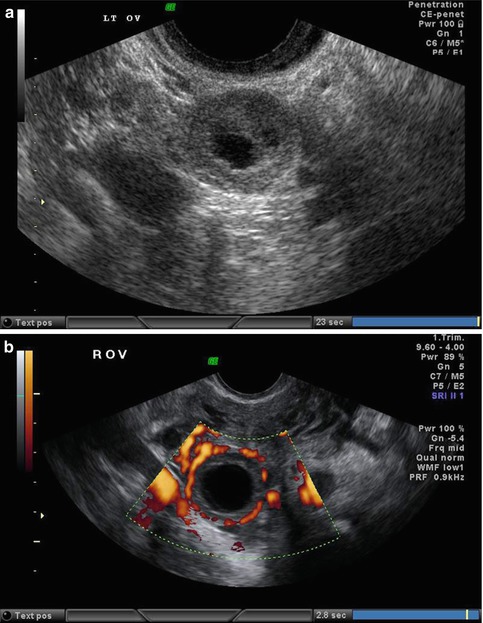 Less than 1 % of ectopic pregnancies are implanted within the abdominal cavity [11, 23]. The pathogenesis of abdominal implantation is controversial. Many are the result of secondary nidation within the peritoneal cavity after tubal abortion, tubal rupture or uterine rupture [24]. True primary abdominal implantation must satisfy the criteria of Studdiford. Studdiford, reporting a primary peritoneal implantation in 1942, established three criteria for such a primary abdominal pregnancy: normal fallopian tubes with no evidence of recent or remote trauma, the absence of any uteroperitoneal fistula, and the presence of a pregnancy related exclusively to the peritoneal surface and early enough to eliminate the possibility of secondary implantation following a primary nidation within the tube [25].
The most common abdominal implantation site is the posterior cul-de-sac, followed by the mesosalpinx, the omentum, the bowel and its mesentery, and the peritoneum of the pelvic and abdominal walls, including the anterior cul-de-sac [23]. Other reported locations include the retroperitoneal space, the appendix, the liver, and the spleen [26–31].
With the universal use of early pregnancy imaging, the diagnosis can be confirmed at an early gestational age, but this requires imaging demonstrating a continuity of the cervix and uterus without pregnancy contents, like other ectopic implantations. The presence of an adnexal mass suggestive of ectopic pregnancy, when no intrauterine gestation is identified, could be an ectopic pregnancy of any location, including an abdominal implantation. Failure to follow basic ultrasound principles can miss the diagnosis. Such early diagnosis can spare maternal mortality at the expense of fetal mortality, with a perinatal mortality rate of 40–95 % [32].

Although previously rare, the incidence of pregnancy implantation within the scar of a prior cesarean is increasing due to the increasing number of cesarean deliveries. The natural history of such a condition is unknown, but uterine scar rupture and hemorrhage, even in the first trimester, seems likely if the pregnancy is allowed to continue, with possible serious maternal morbidity and the possible need for hysterectomy and loss of subsequent fertility. Early diagnosis of such implantation is made only with a high level of suspicion: early ultrasound in a woman with a prior cesarean delivery (Fig. 25.7). 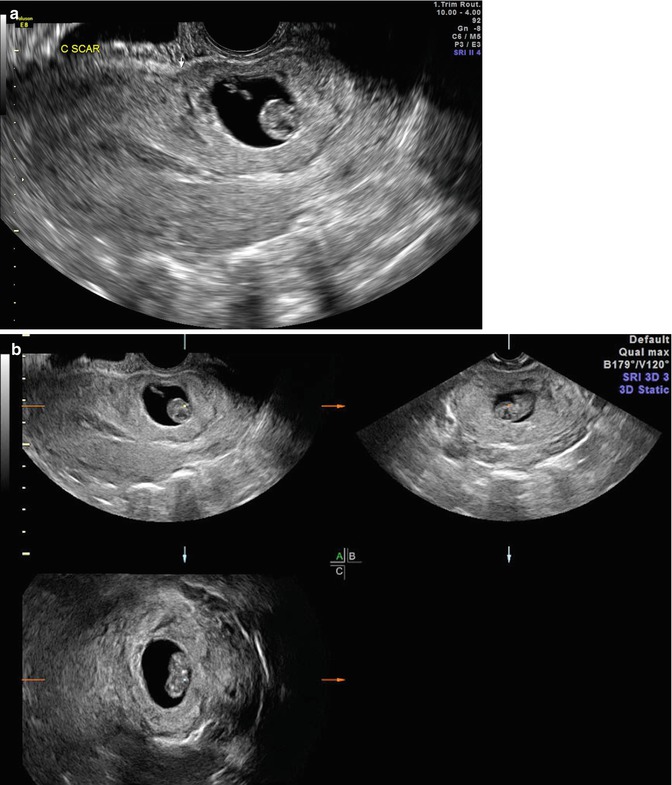 (a) Transvaginal ultrasound: midline sagittal image with gestation in the anatomical location of a prior cesarean scar. (b) Transvaginal ultrasound: 3D rendering of cesarean scar ectopic
Endometrial and myometrial disruption or scarring can predispose to abnormal pregnancy implantation. Trophoblast adherence or invasion is enhanced when the scant decidualization of the lower uterine segment is impaired further by previous myometrial disruption. Implantation of a pregnancy within the uterine scar of a prior cesarean delivery is different from an intrauterine pregnancy with placenta accreta. Cesarean scar implantation is a gestation completely surrounded by myometrium and the fibrous tissue of the scar and separated from the endometrial cavity or fallopian tube (Fig. 25.7). The mechanism that most probably explains scar implantation, like intramural implantation, is invasion of the myometrium through a microscopic tract. Like intramural pregnancy, such a tract is believed to develop from the trauma of previous uterine surgery, such as curettage, cesarean delivery, myomectomy, metroplasty, hysteroscopy, and even manual removal of the placenta [33–35]. The time interval between such trauma and a subsequent pregnancy may impact upon implantation events. Some of the reported cases were diagnosed and treated within a few months of a prior cesarean delivery suggesting that incomplete healing of the uterine scar may contribute to scar implantation [36
Only gold members can continue reading. Log In or Register to continue