A pulmonary arteriovenous fistula (PAVF) is a direct connection between a pulmonary artery and pulmonary vein. These high-flow, low pressure, thin-walled fistulae are commonly called pulmonary arteriovenous malformations (PAVMs). Complications of untreated PAVFs are related to the right-to-left shunt. Patients may present with hypoxia, exercise intolerance (59%), stroke/transient ischemic attack (TIA) (30%), brain abscess (9%), or hemoptysis (3%).1 Massive hemoptysis and/or hemothorax occurs in fewer than 8% of patients.2 Enlargement and rupture of the PAVF occurs more commonly in times of increased cardiac output and hormonal surges such as pregnancy.3,4 Migraines are present in up to 46% of patients with PAVFs.1

Acquired PAVFs occur in hepatopulmonary syndrome and in patients with Glenn or Fontan shunts, malignancy, trauma, amyloidosis, and erosion from Rasmussen aneurysms. Most (>90%) congenital PAVFs are associated with hereditary hemorrhagic telangiectasia (HHT) or an HHT-like disorder.1 PAVFs are commonly seen in HHT, previously known as Rendu-Osler-Weber syndrome. HHT is an autosomal dominant disorder characterized by epistaxis, telangiectasias (commonly on the lips, nose, and fingers), and AVMs (PAVFs, brain, gastrointestinal [GI] tract). A diagnosis of HHT is made based on the Curacao criteria (Table 19.1) or by genetic testing.5 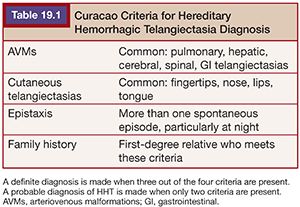 Genetic defects associated with HHT and HHT-like syndromes are related to the transforming growth factor beta (TGF-β) pathway. Three mutations have been identified: endoglin (ENG), activin A receptor type II like 1 (ACVRL1 or ALK1), and SMAD4. The ENG mutation is associated with a higher incidence of PAVF and cerebral AVM than the ALK1 mutation.6 A new genetic mutation in BMP9 has recently been identified in patients with an HHT-like syndrome.7

Workup for PAVF is required in all patients with HHT, hypoxia of unknown origin, or evidence of a right-to-left shunt such as a young patient with a brain abscess. Patients may experience orthodeoxia, which is a decrease in oxygen saturation when standing. The workup starts with an Echo–bubble study. Delayed appearance of bubbles in the left heart indicates an extracardiac shunt. If the Echo–bubble study is positive, we proceed with a noncontrast chest computed tomography (CT). Contrast is not necessary for the chest CT. It increases the radiation dose and serves as a risk for intravenous air embolus. The 1-mm axial images should be carefully reviewed to identify any abnormal connection between a pulmonary artery and pulmonary vein. Coronal and sagittal reconstructions can also be helpful.

Due to the need for continuous long-term follow-up, not only of PAVFs but also of the other vascular malformations associated with HHT, we and many other experienced interventionalists believe that these patients should be treated at an HHT Center of Excellence. However, patients will present outside of HHT Centers of Excellence with emergent indications for embolization of their PAVF such as hemoptysis, hemothorax, or brain abscess. It is beyond the scope of this text to discuss the entire workup and management of an HHT patient.8 Our goal is to provide a basic guide to performing PAVF embolization with the current embolic technology available. 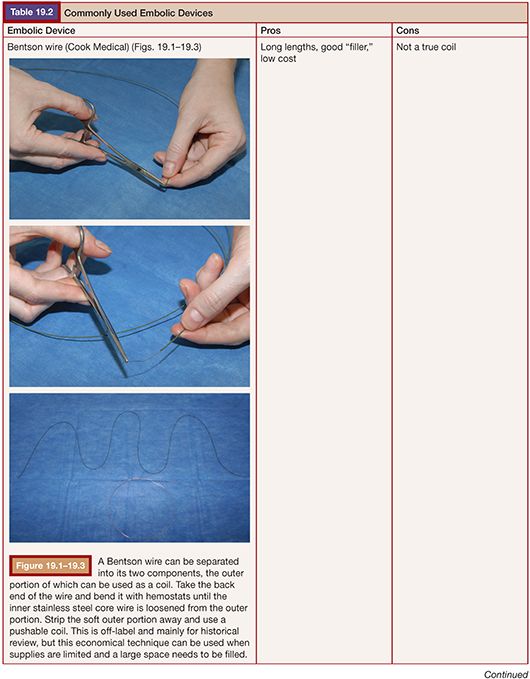 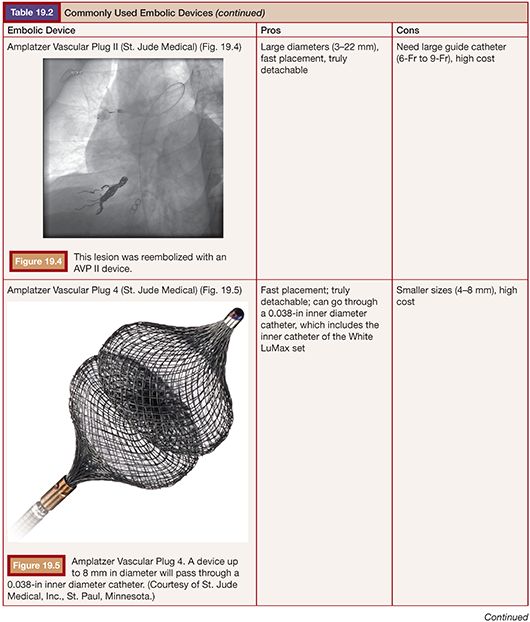 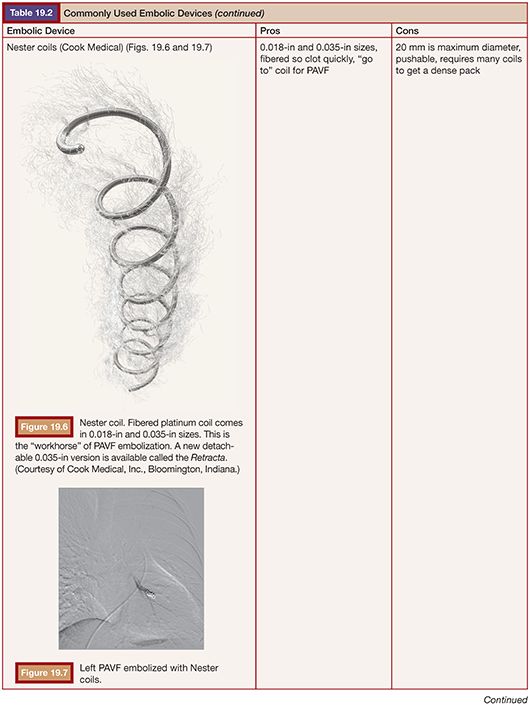 Embolization for PAVF was first described by Porstmann9 in 1977 and Taylor et al.10 in 1978. Dr. White and colleagues11 further refined the techniques, which led to the development of the White LuMax catheter system (Cook Medical, Inc., Bloomington, Indiana). Early on, coils and detachable balloons were used to close PAVFs. Detachable balloons are no longer available in the United States due to deflation and systemic embolization concerns. The techniques used today are not much different than those described by Dr. White, with the exception of improved embolic devices.1,11,12 Our goal with adult patients is to embolize as many PAVFs in one outpatient setting as possible within the constraints of contrast load and radiation exposure.13 In children, we embolize the PAVFs greater than 3 mm in size with the concern that embolization of smaller vessels in the developing lung will result in a “blocked path” to a PAVF that has recruited smaller feeders, making subsequent embolization more difficult.

Right heart and pulmonary artery pressures should be measured to evaluate cardiac physiology. Large right-to-left shunts can cause increased cardiac output and may lead to heart failure. Rarely, pulmonary hypertension (even with PAVFs) may be present. This is felt to be related to the TGF-β family of receptors.14 If pulmonary hypertension is present, evaluation for a left-to-right shunt, such as in the liver, should be performed. 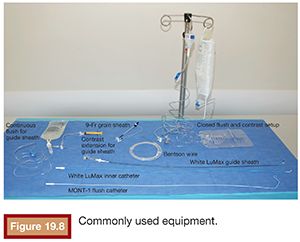 We use a standard right femoral vein approach using a 7-Fr introducer sheath. A diagnostic pulmonary arteriogram is performed with a 7-Fr MONT-1 catheter (Cook Medical, Inc., Bloomington, Indiana). Alternatively, a pigtail catheter over the back end of a shaped Bentson wire (Allwin Medical Devices, Anaheim, California) or a tip-deflecting wire (Cook Medical, Inc., Bloomington, Indiana) may be used. Pulmonary artery pressure measurements are obtained. Diagnostic angiography is performed in full inspiration in the anteroposterior view and the ipsilateral oblique (40 to 60 degrees; we generally use 40 degrees). This projection may seem counterintuitive as it projects the heart over the lung, but this view is best for spreading out the basilar segments where most PAVFs occur. Contrast injection rates range from 20 to 50 mL at 10 to 25 mL per second depending on the size of the pulmonary arteries, size of PAVFs, and presence of pulmonary hypertension. A frame rate of at least six frames per second should be used. It is important to include deep into the lung bases in the field of view as most PAVFs occur in the bases. Each segmental artery should be carefully followed to evaluate for the fistulous connection. A PAVF looks like a long continuation of the pulmonary artery into the pulmonary vein (Fig. 19.9). Frequently, there is an aneurysmal component at the site of the fistula (Fig. 19.10). The feeding vessel is measured. The standard teaching is that anything larger than 3 mm should be embolized. However, typically, the HHT Centers of Excellence use the technique that embolizes as many PAVFs in one setting as possible in the adult patient even sizes smaller than 3 mm as there are reports of embolic events in PAVFs measuring below the 3-mm “standard.”13–15 Over a 260 cm 0.035-in stiff Amplatzer wire, the diagnostic catheter is exchanged for a White LuMax set, which comes in two sizes: 7-Fr or 8-Fr guide catheter with a coaxial angled tip inner catheter. At this point, the patient should receive a bolus of intravenous heparin (~40 IU/kg). The pulmonary artery lower segments are generally easily accessed by “flopping” the Bentson wire down into the basilar segment. A hydrophilic angle tip wire such as a Glidewire (Terumo Medical Corporation, Somerset, New Jersey) may facilitate selection of the feeding vessel but should be used with care as dissection can occur. The middle and upper segments are more challenging to cannulate and may require a more sharply angled catheter such as a Judkins right coronary catheter (Cordis) or a left internal mammary catheter. 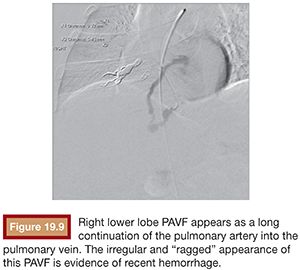