Plain abdominal films can be used as an initial tool to screen for gross intestinal abnormalities, but are of otherwise limited value due to low sensitivity and specificity. A double-or triple-contrast computerized tomography (CT) scan is usually very valuable to get an immediate assessment of the extent of bowel involvement, and to rule out recurrent tumor or metastatic disease. Points of obstruction, fistulization, perforation, and abscesses can be readily identified (Fig. 16.1). The relationship of the involved bowel segment to and involvement of adjacent structures can also be assessed with CT [8, 11]. Injured bowel has a thickened and distorted appearance on CT, with associated smooth strictures and distended proximal bowel loops [12]. However, it should be kept in mind that injured bowel may be found intraoperatively in radiographically normal appearing bowel. Enteroclysis and CT enterography are sometimes very helpful to assess the extent of small bowel involvement. Positron emission tomography CT (PET-CT) may be used to identify tumor uptake of FDG in cases when new mass lesions are found on standard CT scanning. When assessing the abdomen and/or pelvis for fistulas, magnetic resonance imaging (MRI) and MR enterography may also be used when available, but generally do not appear to provide much additional information for the assessment of the small intestine or colon, compared to CT [13]. 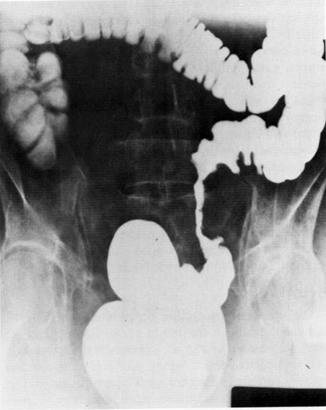 Proctosigmoidoscopy or full colonoscopy is used for diagnostic investigation of the rectum and colon, and may also have a therapeutic role in management of radiation-induced colon and rectal disease. Visualization of the small intestine can be achieved with colonoscopic intubation of the terminal ileum, or with enteroscopy [14]. Video capsule endoscopy is also described as an investigative tool for this purpose, but due to the risk of the capsule becoming lodged in a stricture or twisted bowel it is advised to first test its passage by using a sham capsule [8, 15]. Transrectal endoscopic ultrasound may be used for the assessment of rectal fistulas [41].

In additional to diagnostic evaluations, assessment of the physiological and nutritional well-being of the patient, through the measurement of the body mass index (BMI), complete blood counts, blood chemistries including serum albumin, other biochemical tests of nutrient status, and coagulation tests. Tumor markers are helpful in identification of patients suspected to harbor a recurrence of their primary tumor.
The extent of the pre-operative work-up should be tailored by the patient’s history, symptoms and physical signs, and should be as extensive as time permits and logic advises, depending on the urgency of the operation. If symptoms can at least partially be controlled with medical therapy, valuable time can be used to improve the patient’s overall status through re-nourishment with parenteral nutrition and addressing any other medical problems when present [11].
Table 16.2 lists the common surgical approaches to complications related to small intestinal injury, while Table 16.3 shows the surgical management for radiation injury of the colon and rectum.

Obstruction is the most common indication for surgery in patients with radiation enteropathy [3, 6, 10]. Other indications include fistulization to the skin, adjacent bowel or other organs, intractable bleeding, and perforation (with local or generalized peritonitis). When operating for obstruction or other complications of radiation enteropathy, it is important to be cognizant of the fact that radiated small bowel may have stenosis or fistulizations at several concomitant location points [17–18]. In addition, removal or decompression through a stoma of a long segment of involved small intestine can leave the patient with short bowel syndrome, even if the remaining length of small intestine is measured to be 150 cm or more [19]. Radiation-injured intestine heals poorly after surgery and does not provide healthy support for anastomoses or stricturoplasties; suture-line leakage in radiated bowel is estimated at 30–50 % [3, 10]. Another point of consideration is that radiation may cause considerable damage to the skin and the abdominal wall. In turn, this damage may lead to wound dehiscence, intestinal eventration, and stoma failure. Due to these considerations, incision lines and stoma sites should be kept outside of the radiation field.
Various strategies have been attempted to manage small intestinal obstruction in these patients. At present, it appears that the best treatment option is the complete removal of all injured bowel and creation of an anastomosis with healthy intestine at both ends. This strategy minimizes symptom recurrence and possibly results in fewer repeat operations. In addition, this approach would be expected to have the lowest anastomotic leak rate [1, 3, 6, 10]. On the other hand, these operations necessitate considerably more extensive and time-consuming small intestinal dissections in a hostile environment, namely diffuse pelvic fibrosis, (also known as the “frozen pelvis”). Dissection of “cocconed” bowel that is densely adhered to surrounding structures results in a significant risk for damage to the intestine and adjacent organs (estimated to be about 23 %) (Fig. 16.2) [19]. However, the presence of dense adhesions should not pose a contra-indication for complete resection, as the anticipated damage to pelvic organs, namely the uterus, vagina, and urinary bladder, can be repaired primarily. During these operations intact preservation of the ureters is critical, and use of ureter catheters is advised to help to safely guide the dissection. 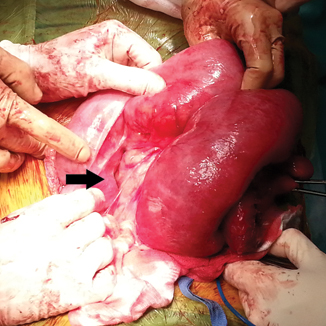 Laparotomy for a patient with small bowel obstruction secondary to radiation enteritis. After extensive adhesiolysis to separate a conglomerate of short bowel, a thickened, fibrosed, and strictured distal segment (arrow) that caused the obstruction had to be freed from dense adhesions to the abdominal wall before resection. Distended proximal bowel shows mottling and serosal changes that indicate chronic obstruction but also radiation-induced injury. Note the thickening and shortening of the mesentery.
If complete resection of all injured bowel is contemplated, wide margins should be planned. Although some authors have advocated the preservation of the ileocecal valve with creation of an anastomosis between the jejunum and terminal ileum, when possible, it should be noted that it is difficult to make an intraoperative distinction between diseased and healthy bowel based on serosal appearance alone (Fig. 16.3). Therefore, an attempt should be made to avoid all bowel located below the pelvic inlet. Inclusion of the right colon in the resected specimen is also advised, since it is also frequently affected to some extent by radiation [19]. Creation of an anastomosis between the proximal end of the small bowel to the transverse colon has proven useful in minimizing the rate of anastomotic leaks, with one report describing a dramatic reduction in anastomotic leakages from 50 to 7 % with this kind of anastomosis [1]. This finding is of considerable interest, since anastomotic failure is especially lethal in surgical patients with radiation-induced enteropathy due to their overall poor preoperative and post-operative state. 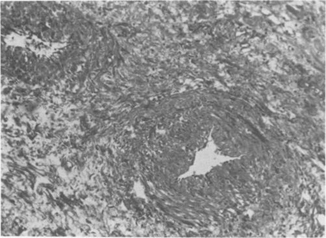 Endothelial proliferation and subendothelial deposition of hyaline material causes narrowing of intestinal blood vessel lumen. These changes do not always directly correlate with gross serosal appearance of the bowel. (Source: With permission from Lippincott Williams and Wilkins 1981 (24)
If complete resection and anastomosis are deemed impractical or too dangerous, whether because of intraoperative findings or due to the general poor health of a patient, a decompressive procedure or other less extensive options should be utilized. A decompressing proximal enterostomy is the safest of these, since it entails minimal if any dissection, avoids intestinal resection, and leaves no suture lines on diseased bowel. The disadvantage of this approach is the continued presence of the injured bowel. This poses a risk of later complications, including recurrent fistulization, bleeding, and perforation thus potentially necessitating further operations. Furthermore, the diseased segment represents a potential site of new or recurrent cancer [10]. A bypass operation of an obstruction or fistula, produced by creating an anastomosis between bowel that is proximal and distal to the diseased segment (usually healthy jejunum to transverse colon) has been popular in the past. This surgery avoids dissection of the inflammatory mass. However, bypassing of intestine damaged by radiation has now generally been abandoned as an operative option because of poor long-term outcomes from blind loop syndrome, maldigestion, progression of diseased bowel as well as the aforementioned complications. Their use is reserved when other surgical options are not possible [3, 19]. A staged operative strategy is often the best solution for complex cases of radiation enteropathy. In this setting, an initial operation addresses the acute obstruction or perforation with a diverting stoma, and after the patient’s condition has improved a second, definitive procedure is undertaken.
Lysis of adhesions alone without resection is unsatisfactory as treatment for obstructed, radiated bowel, as this approach is associated with a high rate of recurrent obstruction [19–20]. Deserosations and frank enterotomies should be anticipated consequences during dissection in patients with a frozen pelvis, and the outcomes of primary repair in injured bowel in this setting are poor.
Only gold members can continue reading. Log In or Register to continue