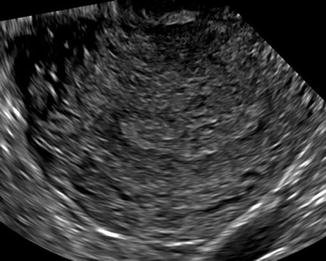 Midtransverse plane of the uterus 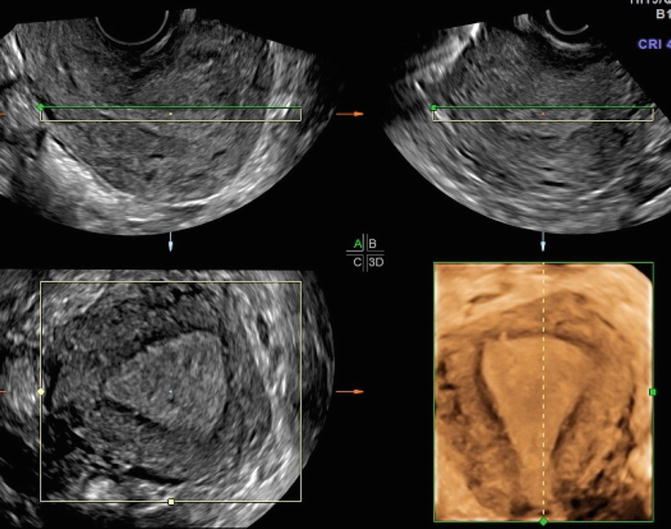 The three orthogonal planes sagittal, transverse, and coronal planes as well as the rendered image. The coronal image also portrays the hypoechoic junctional zone of the myometrium

Measurements of the uterus include the length, height, and width. The length and height are measured in the midsagittal plane, whereas the width is measured in the transverse plane [6, 7]. The length is measured from outer serosal surface of the fundus to the external os of the cervix. If volume assessment of the uterus is required, then the cervical length should be excluded from the height measurement. Uterine volume may be calculated using the formula: volume = length × width × height × 0.52. The length of a normal nulliparous uterus is 6–8.5 cm, and in multiparous women, it is 8–10.5 cm. The height is measured from anterior to posterior serosal surfaces and perpendicular to the long axis of the uterus. The height of the normal uterus in nulliparous women is 2–4 cm, and in multiparous women, it is 4–6 cm. The width of the corpus is taken at the widest region of the uterus on a transverse plane. The width of a nulliparous uterus is 3–5 and 4–6 cm in multiparous women.
The orientation of the uterus is described in the anteroposterior and right-left dimensions in relation to the supine body. The orientation is noted once the optimum midsagittal image is obtained using the echogenic endometrium for guidance. The direction of the ultrasound probe can provide the right to left orientation. The orientation in the anteroposterior dimension is described in terms of version and flexion which require image processing. The uterus is said to be flexed or angled across the isthmus when there is an angle between the cervix and the corpus of the uterus (Fig. 8.4). The anteroflexed and retroflexed uteri can pose a challenge to procedures that require access to the endometrial cavity. If there is no angulation between the cervix and the corpus, the uterus is described in terms of version (Figs. 8.1 and 8.5). It is important to describe and report the orientation of the uterus as part of the ultrasound examination. This information is helpful if uterine instrumentation is required. 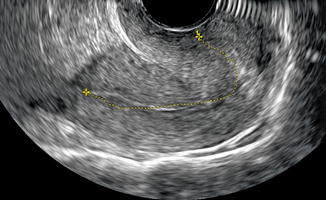 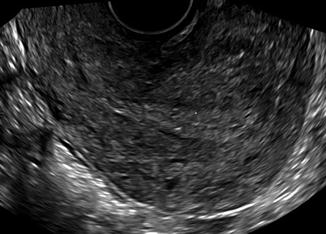 The uterine myometrium is made of a homogeneous layer of smooth muscle and blood vessels. The uterine arteries reach the uterus at the level of the cardinal ligaments and divide into ascending and descending branches that travel within the layers of the broad ligament along the lateral wall. Sonographically the normal myometrium has a medium echogenicity, less than the endometrium, with a granular echotexture. The myometrium can be divided into three layers. The inner or junctional myometrium, which abuts the endometrium, is thin and hypoechoic compared to the thicker homogeneous middle layer (Fig. 8.3) [7, 8]. Thickening of this layer has been shown to be associated with adenomyosis [9]. The arcuate vessels separate the middle and outer layer which is also thin and slightly less echogenic than the middle layer. The myometrium does not appear to change sonographically during the course of the menstrual cycle.

The uterine endometrium is the site of dynamic changes in response to ovarian hormones during the menstrual cycle. It can be divided into the inner functional layer that sloughs during menses and the outer basal layer which abuts the myometrial junctional layer. The changes that occur during the menstrual cycle can be seen sonographically [7, 8, 10–17].
The immediate postmenstrual endometrium is a thin echogenic line (type A) at the intersection of anterior and posterior uterine walls and normally measures 3–8 mm (Fig. 8.1). Assessing the endometrial thickness in patients presenting with postmenopausal bleeding is an important step in the overall evaluation process. It is important to know that a thin endometrium in that setting, typically at less than 5 mm, has been correlated in multiple studies with the absence of endometrial cancer. When measuring endometrial thickness on ultrasound, it is critical to ensure that the uterus is in a midsagittal plane, the whole endometrial stripe is seen from the fundus to the endocervix, the thickest portion is measured, and the image is clear and magnified.
Under the influence of increasing estradiol hormone levels secreted by the growing ovarian follicles, endometrial proliferation occurs. Sonographically this is seen as thickening of the lining into the so-called trilaminar layer (type B) with an anterior and posterior hypoechoic layer separated in the midline by a hyperechogenic central line (Fig. 8.6). During the late proliferative period and near the time of ovulation, endometrial lining is 8–12 mm in thickness with an accentuated trilaminar appearance (type C, Fig. 8.7). 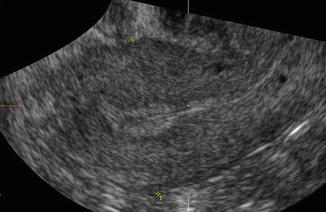 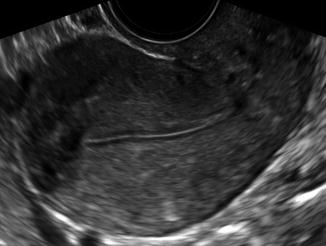 Late proliferative phase endometrium with an accentuated trilaminar pattern (type C)
The post-ovulatory endometrial lining, under the influence of progesterone hormone secreted by the corpus luteum, is characterized by loss of the trilaminar appearance and the development of a uniformly hyperechoic stripe (type D, Fig. 8.8). 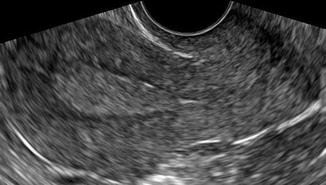