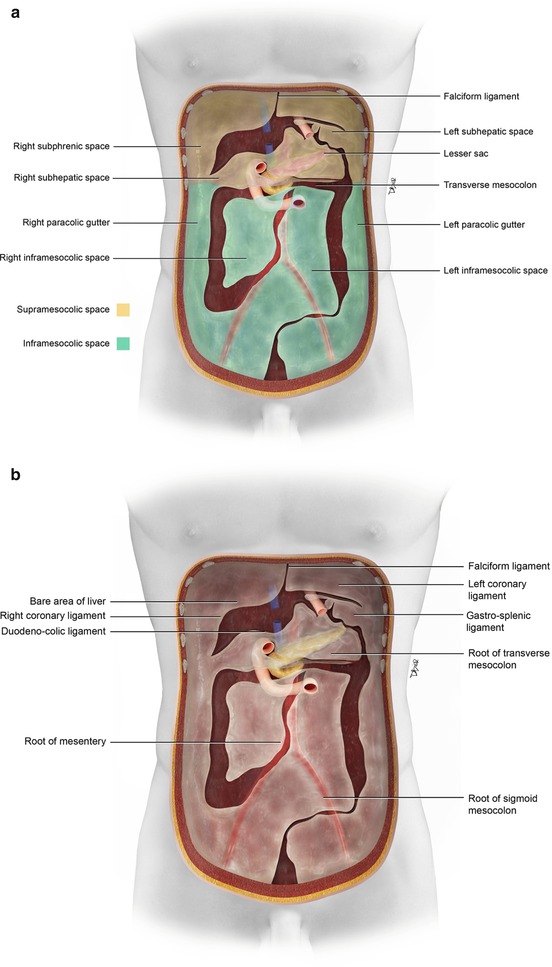 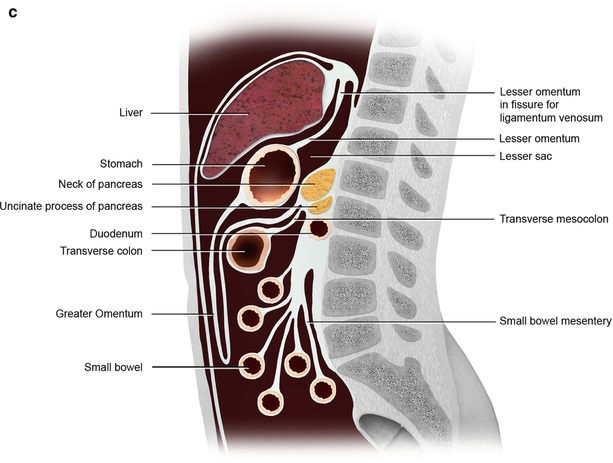 (a) The peritoneum is divided into the supramesocolic and inframesocolic space by the transverse mesocolon. Additional compartments and spaces are formed by the ligaments and mesentery (a). (b, c) The peritoneum and its ligament and mesenteric attachments (b). Sagittal view of the omental, mesenteric, ligamentous, and visceral attachments within the peritoneal cavity (c)
In the pelvis, the peritoneum continues, forming additional spaces and compartments as a result of its folds and reflections. The bladder divides the pelvic peritoneum into the anterior and posterior paravesicular spaces. Further divisions in the pelvic peritoneum are caused by the indentations made by the inferior epigastric artery, obliterated umbilical artery, urachus, uterus, and rectum (Fig. 16.3). 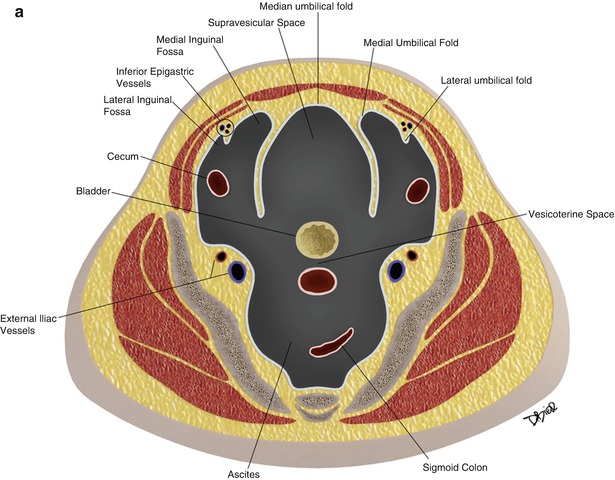 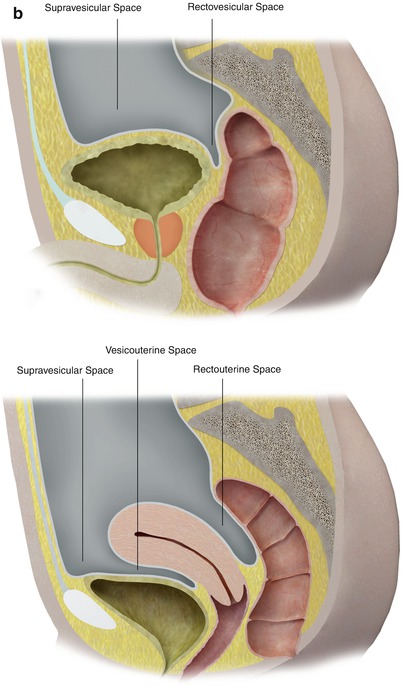 The peritoneum continues into the pelvis, where it is further divided into different compartments and spaces by indentations and reflections of the peritoneum. For example, the lateral and medial inguinal fossae are divided by the indentations made by the inferior epigastric vessels (a). Lateral view of the pelvic peritoneum in the male (A) and female (B) (b)
The complex spaces, compartment, ligaments, mesenteries, and omenta formed from the development of the peritoneum allows for the normal and abnormal pathologic process to occur. It allows for the nourishment of the organs as well as expected routes for disease spread. Disease can spread directly, by intraperitoneal seeding, lymphatic extension and the hematogenous route within the peritoneum. Within this context of development, peritoneal disease manifestations in the form of thickening, masses, cysts, fluids, calcifications, and air can be assessed and understood (Table 16.1).

Some of the more common pathology of the peritoneum

Thickening of the peritoneum is a nonspecific finding. It can be widespread as in the case of peritoneal carcinomatosis or focal. Numerous neoplastic and nonneoplastic conditions cause peritoneal thickening, and their imaging features can overlap. However, several imaging and clinical features can help narrow the differential diagnosis (Algorithm 16.1). 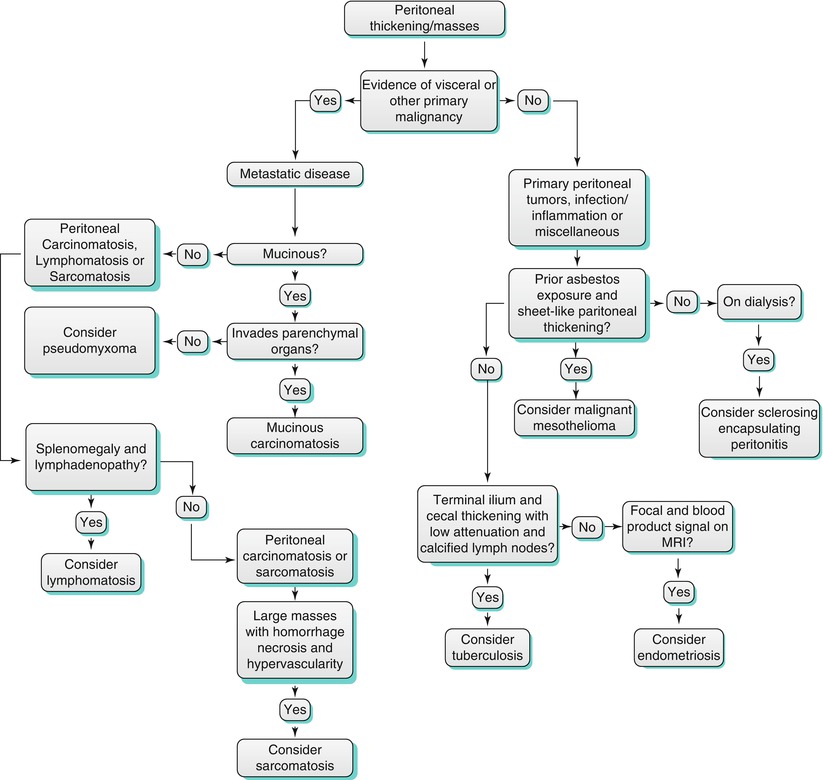 Algorithm 16.1 Flow diagram for the differential diagnosis of peritoneal thickening
For example, if there is evidence of a visceral or primary tumor elsewhere, then metastatic disease would be a concern. Indeed, metastatic disease is the most common cause of peritoneal thickening [2].
If there is no evidence of a primary tumor, then primary peritoneal tumors could be considered. Primary peritoneal tumors such as malignant mesothelioma and primary peritoneal serous carcinoma can cause peritoneal thickening and masses.
In addition, when there is clinical concern for an infectious or inflammatory process, then granulomatous peritonitis from tuberculosis or sclerosing encapsulating peritonitis can be sought.
Finally, when there are focal mass or masses in the peritoneum without a primary malignancy; entities such as splenosis and endometriosis can be present. 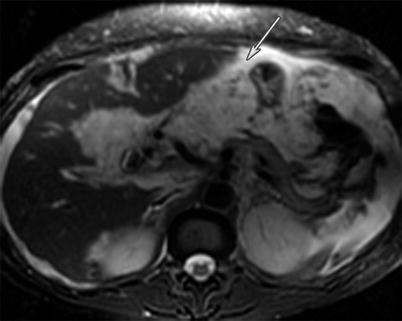 A 49-year-old female with gallbladder cancer. T2-weighted MRI image of the abdomen reveals peritoneal carcinomatosis in the form of widespread peritoneal thickening and masses encasing the liver surface with associated ascites (white arrow). The carcinomatosis is high in T2 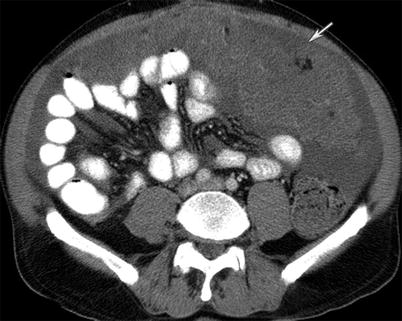 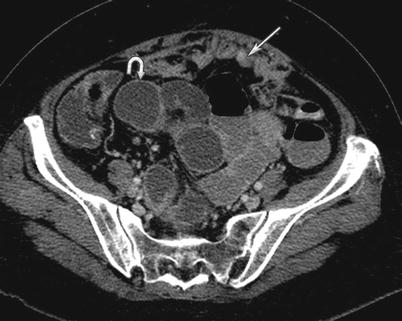 A 64-year-old female with high-grade serous carcinoma of the ovary. CT of the abdomen and pelvis with intravenous contrast reveals fluid-filled and dilated small bowel consistent with small bowel obstruction (curved arrow). The transition point of the bowel contains wall thickening from serosal metastatic deposits (not shown). Peritoneal carcinomatosis evidenced by omental thickening (straight arrow)
CT imaging is widely used for imaging of peritoneal metastasis. However, Low et al. has found that delayed gadolinium-enhanced MRI is accurate for detecting small volume peritoneal tumors and carcinomatosis [3]. Metastatic disease is suspected when peritoneal enhancement is greater than that of the liver on delayed images (5–10 min) with associated peritoneal nodules, thickening, and masses. Also, adding DWI improves the sensitivity and specificity for depicting peritoneal metastasis [3]. 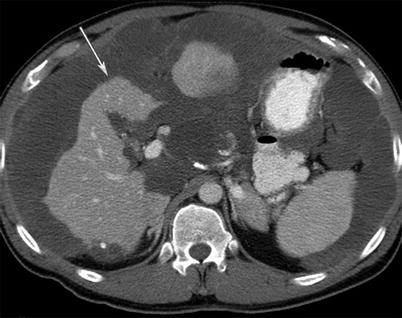 A 54-year-old male with primary appendiceal mucinous adenocarcinoma. Pseudomyxoma peritonei seen as thick and gelatinous material filling the peritoneum and scalloping the surface of the viscera such as the liver without invasion (arrow) on CT imaging of the abdomen with intravenous contrast 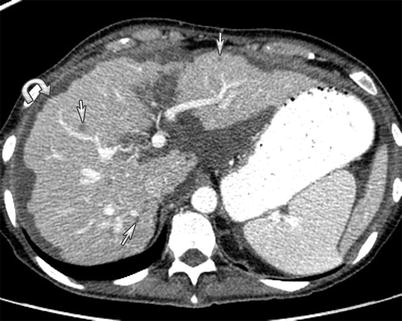 A 49-year-old female with mucinous adenocarcinoma of the colon. Mucinous carcinomatosis evident in the form of mucinous encasement and scalloping of the liver capsule (curved arrow) and liver parenchymal metastasis in the form of sub-centimeter hypodense new nodules (arrows) as seen on CT of the abdomen with intravenous and gastrointestinal contrast
CT will show mucinous ascites as low in attenuation with scalloping of the liver, spleen, and gastric surfaces. Unlike regular ascites, mucin will displace bowel and mesentery and causing them to not float. 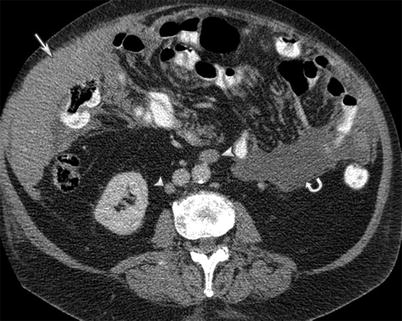 A 77-year-old male with mantle cell lymphoma. CT of the abdomen with intravenous and gastrointestinal contrast reveals omental caking (arrow) and ascites (curved arrow) from peritoneal lymphomatosis. The clue to the diagnosis is the retroperitoneal lymphadenopathy (arrowhead) 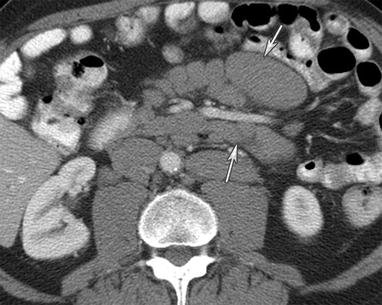 A 67-year-old male with chronic lymphocytic leukemia with Richter’s transformation. CT of the abdomen with intravenous and gastrointestinal contrast shows multiple mesenteric lymphadenopathy encasing the mesenteric vessels, known as the “sandwich sign” (arrows)

Gastrointestinal stromal tumor (GIST) is a mesenchymal tumor that typically arises from the gastrointestinal tract. They are rarely seen in the omentum and mesentery. Their presentation as seen on CT imaging can be diffuse peritoneal thickening and seeding, similar to peritoneal carcinomatosis. They have been found to characteristically present as large masses with hemorrhage or necrosis. Furthermore, a differentiating feature that has been described is their hypervascularity (Fig. 16.11) [4]. 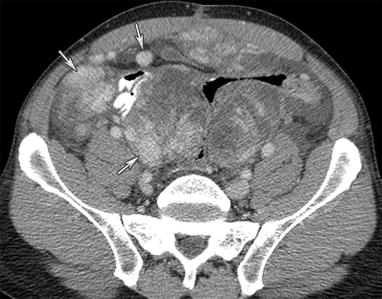 A 59-year-old male with gastrointestinal stromal tumor. CT of the abdomen and pelvis with intravenous and gastrointestinal contrast demonstrates multiple enhancing nodules and masses throughout the peritoneum (arrows) suggestive of peritoneal sarcomatosis

Both ovaries are normal.
2.

The involvement of extraovarian sites must be greater than the surface of both ovaries.
3.

The ovarian involvement is limited to the ovarian surface epithelium [1]. 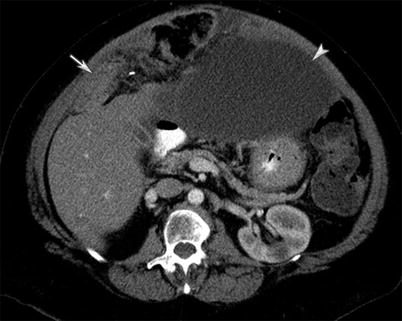 Besides cancer, an inflammatory or infectious process can also cause peritoneal thickening (Fig. 16.14). Granulomatous peritonitis has been used to describe a spectrum of infection and inflammation in the peritoneum, including tuberculosis, histoplasmosis, and pneumocystic infection; foreign materials such as talc and barium; bowel contents; ruptured ovarian cysts; bile; gallstones; Crohn disease, sarcoidosis, and Whipple disease. Splenic or lymph node calcification along with thickening of the cecum and terminal ileum and low attenuation lymphadenopathy may help in identifying tuberculosis causing peritoneal thickening (Fig. 16.15). 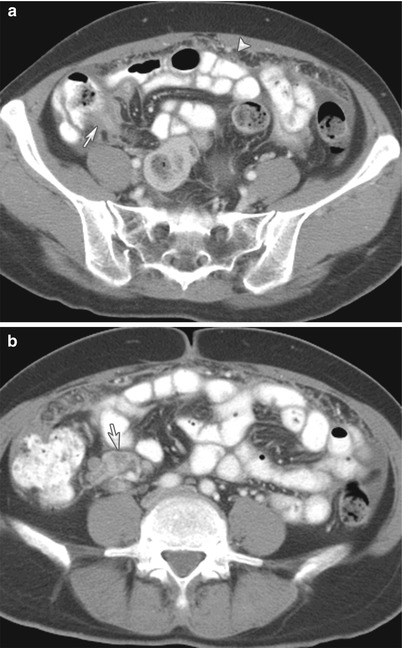 (a, b) A 60-year-old female with granulomatous peritonitis from tuberculosis. CT of the abdomen and pelvis with intravenous and gastrointestinal contrast reveals wall thickening and inflammation near the cecum (arrow) and omental nodularity (arrowhead) (a). Additionally, a cluster of low-density enlarged lymph nodes congregate in the ileocecal region (arrow), (b)
Peritoneal thickening found in a peritoneal dialysis patient could suggest sclerosing encapsulating peritonitis, a rare entity. It is also referred as abdominal cocoon. It is a rare complication observed in long-term dialysis patients and other forms of peritoneal inflammation such as peritoneovenous or ventriculoperitoneal shunts, tuberculosis, and fibrogenic foreign material. The disease manifests in the form of peritoneal thickening with signs of inflammation. Additionally, peritoneal thickening, peritoneal calcifications, loculated fluids, small bowel feces sign, small bowel obstruction, and signs of bowel ischemia have been described [5]. Classically, an abdominal cocoon manifests as a collection of obstructed bowel loops surrounded by a thick fibrocollagenous membrane/sac as seen on CT imaging (Fig. 16.16).

(a, b) CT of the abdomen (a) without intravenous contrast in a patient with sclerosing encapsulating peritonitis shows peritoneal thickening and calcification (arrow). Note that some of the bowel loops are also dilated. The dilated, tethered, and obstructed bowel loops are encased within a fibrotic peritoneum, as shown on a small bowel series (black arrows on b). This is the typical appearance of an abdominal cocoon

Miscellaneous etiologies such as endometriosis, splenosis, gliomatosis peritonei, and osseous metaplasia can also cause peritoneal masses and thickening.
Splenosis is the ectopic implantation of splenic tissue after disruption of the normal splenic capsule. It can be located anywhere in the peritoneal cavity. Splenosis should be considered when a peritoneal mass or nodule demonstrates similar echogenicity to the spleen on ultrasound and similar attenuation, signal intensity, and enhancement on CT or MRI, respectively (Fig. 16.17). Equivocal lesions can be further investigated with sulfur colloid or technetium 99 m heat-damaged tagged red blood cell scintigraphy. The ectopic splenule will take up the radiotracer. 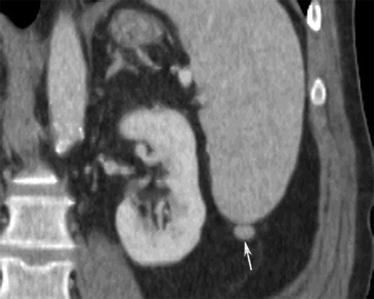 A 53-year-old male with colon cancer. CT of the abdomen with intravenous contrast in the coronal view shows a small nodule in the left paracolic gutter inferior to the spleen (arrow). It has the same enhancement characteristic and attenuation as the spleen, suggesting a splenule and not metastatic deposit
Another example of peritoneal thickening and mass formation in the peritoneum is from endometriosis. Endometriosis occurs when there is functional endometrial glands and stroma outside the uterus. Not only the pelvis but the remainder of the abdominal peritoneum can be involved. These ectopic endometrial implants occur commonly in women.
The ultrasound and CT findings of endometriosis are nonspecific. They can be solid, cystic, or complex cystic and solid changes as seen on CT imaging. MRI is more specific for the diagnosis of endometriosis, appearing hyperintense on T1-weighted and hypointense on T2- weighted images due to blood products (Fig. 16.18). Other features of MRI findings that have been described include low signal intensity rim on T1- and T2-weighted images due to surrounding fibrosis and hemosiderin macrophages [2]. 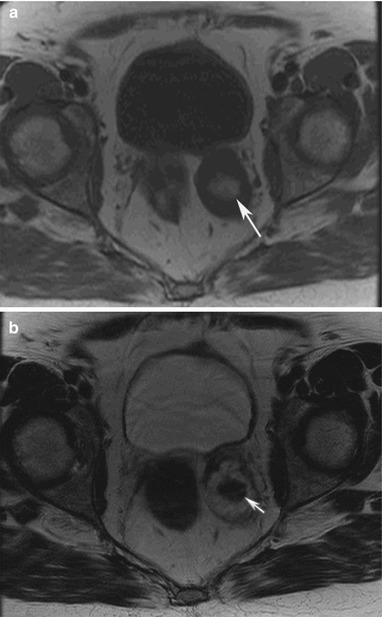 Occasionally, more focal pathologic conditions involve solely the omentum. Conditions such as acute epiploic appendagitis and omental infarction can be found not uncommonly. On the other hand, only a handful of cases have been described in the English literature for primary liposarcoma of the omentum. It is truly a rare condition. Other conditions such as metastatic disease and mesothelioma must also be considered (Algorithm 16.2). 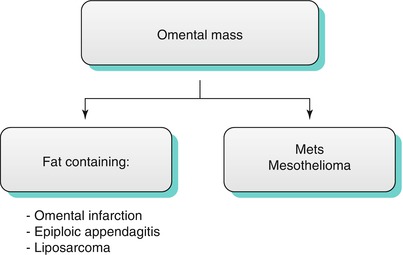 Algorithm 16.2 Differential diagnosis of common omental masses
Epiploic appendages are peritoneal pouches that arise from the colonic serosa, attached to the colon by a vascular stalk and comprised of fat. They are not seen normally by cross-sectional imaging, but can be identified when inflamed. Acute appendagitis has been understood to occur when it is torsed, resulting in vascular or venous occlusion leading to ischemia. Other causes include hernia incarceration, intestinal obstruction, and intraperitoneal loose body [6]. Furthermore, it has been associated with obesity, hernia, and unaccustomed exercise. It is a self-limited condition in most cases.
Only gold members can continue reading. Log In or Register to continue

Tags: Cross-Sectional Imaging of the Abdomen and Pelvis
Sep 9, 2016 | Posted by admin in GENERAL RADIOLOGY | Comments Off on The Peritoneum
Premium Wordpress Themes by UFO Themes
WordPress theme by UFO themes