Sonography is very helpful in evaluating pregnancies that are larger than expected based on menstrual dates. Possible explanations for a large uterine size include incorrect dates, macrosomia, multiple fetuses, as well as complications of twinning such as twin/twin transfusion syndrome or acardia. The pregnancy can be complicated by polyhydramnios, which can be idiopathic or a result of fetal growth acceleration, maternal diabetes, or fetal malformations. The fetal anomalies most often associated with polyhydramnios include those involving the gastrointestinal tract, central nervous system, thoracic and cardiac anomalies, fetal hydrops (isoimmune and nonimmune etiologies), some skeletal defects, chromosomal anomalies, and fetal tumors. When a fetus in the presence of polyhydramnios appears structurally normal sonographically, the outcome is generally excellent.

Masses unrelated to the fetus may also be responsible for the clinical impression that the uterus is larger than expected for the patient’s dates. These masses include uterine fibroids and adnexal enlargement such as an ovarian cyst. The evaluation of the patient whose uterine size is larger than dates includes a complete structural survey of the fetus, including an echocardiogram, fetal biometry, and estimated weight assessment, as well as an evaluation of the myometrium and adnexae for possible masses.

Size/date discrepancy is one of the most common indications for obtaining an obstetrical ultrasound. Obstetricians can measure the uterus externally and compare its overall size to what is expected from the patient’s dates. It is common to find that the size is either too large or too small, thus prompting further evaluation of the pregnancy. When the uterus is larger than anticipated based on the patient’s dates, a sonogram will most often find the explanation.

Most commonly, the dates are incorrect. The patient may have had some spotting within the first month after she conceived. If she mistook the spotting for a true menstrual period, she would have estimated her dates at 4 weeks less than the actual gestation. It is not uncommon to find that the gestational age is 4 weeks ahead of what was expected, based on the final menstrual period prior to conception. If the fetal biometry measures several weeks ahead of what the menstrual dates would predict, the fetus may have macrosomia or growth acceleration. Although in the first trimester the fetal size is normally within 3 to 5 days of the menstrual age, by the third trimester the fetal size can be as much as a month ahead of dates due to accelerated growth. It is important not to rely on sonographic biometry for dating pregnancies in the third trimester due to differential growth rates.

Nowadays, it is extremely rare to make the discovery of twins at the time of delivery. In the vast majority of cases, the size of the uterus will have exceeded the expectation by dates sometime during the pregnancy, thus prompting an ultrasound to discover multiple fetuses. Once an ultra-sound shows that there is more than one fetus (in most cases, twins), the pregnancy is considered at higher risk. Although multiple gestations account for only 1 to 2% of all births, they represent 10 to 15% of perinatal mortality and more than 15% of the low birth weight incidence. Higher-order multiple fetal pregnancies than twins are more common than ever before due to assisted reproduction treatments. The more fetuses present, the higher the risk of prematurity and other complications (Fig. 13–1).

Monochorionic/diamniotic twins are at risk for complications based on the shared placenta, such as twin-to-twin transfusion syndrome (Fig. 13–3).1–3 Deep vascular anastomoses within the placenta can result in an uneven distribution of blood flow to the two fetuses, with one fetus essentially transfusing the other. This results in one anemic fetus and one plethoric fetus. The anemic fetus is usually associated with severe oligohydramnios, whereas the fetus who has received too much blood flow tends to have severe polyhydramnios. Acute enlargement of the uterus, secondary to the development of polyhydramnios, is typical of severe twin-to-twin transfusion syndrome. When discovered at less than 22 weeks, there is a 90 to 100% chance of complete loss of the pregnancy. And in most cases, this is due to premature labor before viability.2,2 Attempts at treating the polyhydramnios by serial removal of large quantities of amniotic fluid by amniocentesis have been helpful in some cases, although the mortality of the polyhydramnios/oligohydramnios sequence in monochorionic twins remains very high. More recently, investigators have used laser ablation of the artery to vein anastomoses in the placenta to arrest the transfusion process and better divide the vascular communications between the twins. This technique is more promising than serial amniocentesis, and improves the outcome for severe twin-to-twin transfusion.4 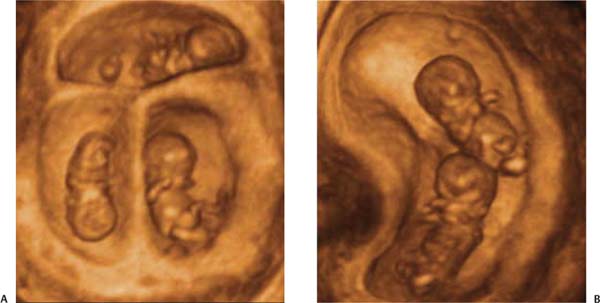 Figure 13–1 (A) Trichorionic triamniotic triplet pregnancy at 9 weeks with three live embryos in a three-dimensional (3-D) image. (B) A 3-D image of a monochorionic twin pregnancy at 10 weeks showing the twins in the same chorionic sac. 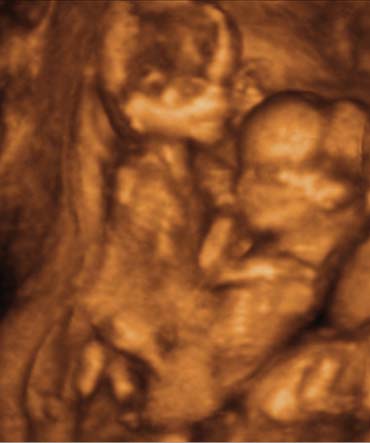 Figure 13–2 A three-dimensional image of a set of thoracopagus conjoined twins sharing a liver and facing each other in the amniotic sac. 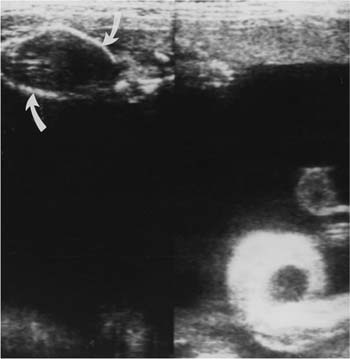 Figure 13–3 Composite image of the uterus in a monochorionicdiamniotic twin pregnancy, complicated by twin-to-twin transfusion syndrome. Note the tremendous amount of polyhydramnios associated with the twin in the dependent portion of the uterus. The twin associated with the polyhydramnios has an enlarged bladder, indicating increased perfusion (arrows). The stuck twin’s head is noted in a superior aspect of the uterus, as indicated by curved arrows. It is suspended by its membrane, due to the severe oligohydramnios in its sac.

Another complication of the monochorionic twinning process is the development of an acardiac twin that is kept alive by its co-twin. This phenomenon results from artery-to-artery shunts in the placenta, and reversal of the arterial blood flow in one twin due to the overpowering arterial pressure of its co-twin (pump twin). With blood flowing in reverse through its arterial system, the acardiac twin’s heart fails to develop and, in most cases, the head and upper body regress, leaving an isolated, malformed lower body with edema. These acardiac twins can grow very large, often larger than the pump twin, and thus threaten the well-being of the pump twin. 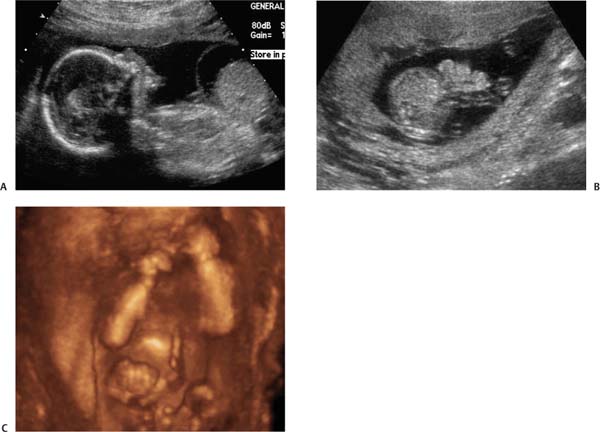 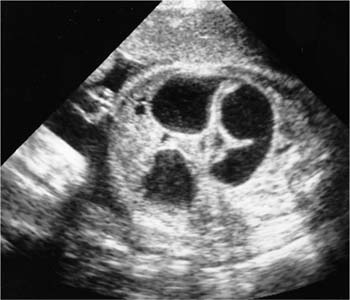 Diabetic women are at an increased risk for having macrosomic fetuses as well as for having their pregnancies complicated by polyhydramnios. When polyhydramnios associated with growth acceleration is detected by a prenatal sonogram, a glucose tolerance test is indicated to detect possible diabetes.