The effects of radiation are either stochastic or deterministic. Stochastic events are random events. They are thought to be initiated by radiation damage to a single cell, which is then passed on to future generations. The probability, but not the severity, of a stochastic event is a function of dose. The probability of a stochastic event increases with dose, but the precise relation is not known. In this way, stochastic effects are similar to the purchase of lottery tickets. Buying more tickets increases the chances of winning, but does not increase the amount of the prize. Cancer induction is one of the primary stochastic effects. Greater radiation exposure increases the chances of cancer but does not increase the severity of the cancer.

Children are about twice as sensitive as adults to stochastic effects, probably because they have a more rapid cell turnover during growth. They also have a longer lifetime after exposure to develop stochastic effects. Stochastic effects do not have a threshold because one cell could be damaged even at extremely low doses.

Deterministic effects result from injury to a population of cells leading to loss of tissue and organ function when sufficient cells are damaged. The amount loss is proportional to the radiation dose. Most organs can function with a loss of some functioning cells, and there is often a “threshold dose,” below which no loss of organ function is observed.

This chapter focuses on the deterministic effects of high doses of radiation to the whole body over a short period of time.

In the previous chapter, we discussed how different organs and tissues have different radiosensitivities, and that delivering the dose to a small area in a very short period of time is more damaging (e.g., to the skin) than spreading the dose out over a larger area, or a greater period of time. Radiation sickness, or ARS, is the result of a large dose of radiation delivered to the whole body in a short period (seconds to minutes) of time. The primary cause of ARS is the destruction of immature parenchymal stem cells in the affected tissues.

From the Center for Disease Control website, the required conditions for ARS are as follows:

1. The dose must be large.
2. The dose is usually external.
3. The dose is from penetrating radiation (e.g., X- and gamma rays).
4. The majority of the body receives the dose.
5. The entire dose is received in a short time.

Most of the data and examples we have regarding ARS are taken from the survivors of the Hiroshima and Nagasaki atomic bombings in 1945, as well as the first responders to the Chernobyl Nuclear Power Plant incident in 1986.

ARS is a collection of various deterministic effects that occur in a definite sequence. These effects, as discussed later, result in three distinct syndromes that occur in order, predictably with increasing dose. They are hematopoietic, gas­trointestinal, and neurovascular syndromes. As their individual names imply, the syndromes are associated with which organ system is primarily affected by the received dose.

After a significant exposure that will result in ARS, there is a series of events referred to as the “phases of ARS.” The phases, discussed in more detail later, are prodromal, latent, manifest illness, and recovery or death.

Though most of the data regarding the stages of ARS come from Japanese atomic bomb survivors, some other clinical examples of ARS are as follows:

1. An explosion at the Chernobyl Nuclear Power Plant in April 1986 resulted in the hospitalization of 237 patients identified as overexposed persons. One hundred thirty-four of them developed ARS. Of these 134 exposed persons, 28 eventually died of ARS-associated injury with extensive radiation burns (Il’in 1995).
2. In September 1987, a shielded radioactive cesium-137 source (50.9 TBq) was removed from the protective housing of an abandoned teletherapy machine in Goiânia, Brazil. Subsequently, the source was ruptured. As a result, many people incurred large doses of radiation by both external and internal contamination. Four of the casualties ultimately died, and 28 people developed local radiation injuries (IAEA 1988).
3. In 1989, a radiological accident occurred at an industrial sterilization facility in San Salvador, El Salvador. The accident occurred when the cobalt-60 source became stuck in the open position. Three workers were exposed to high radiation doses and developed ARS. The immediate acute effects were limited by specialized treatment. Nonetheless, two of the men were so seriously injured that their legs had to be partly or completely amputated. The most highly exposed worker died 6.5 months later, his death attributed to residual lung damage and other injuries (IAEA, Pan American Health Organization 1990).

Being a statistical quantity, the LD50 varies between species and is not an absolute within the species, as it also depends on body weight and general health of the individual. The LD50 is only a guide in assessing the prognosis in any individual or animal. See Table 10.1 for an estimate of mean lethal doses for various species.

Table 10.1 Estimates for the Mean Lethal Doses for Various Animals in Gy

The LD50/30 for human whole body irradiation without medical intervention is approximately 5 Gy. However, as with any other clinical reaction, individual patients will respond differently to the same dose based on their overall health.

As discussed earlier, the effects of radiation depend on the dose received, and this holds for the clinical syndromes associated with ARS.

When a person is exposed to about 1 Gy, the lymphocyte cell count will be reduced. The body will be more susceptible to infection. Early symptoms of such exposures mimic the flu, that is, loss of appetite, nausea, diarrhea, and vomiting. The chapter on whole body radiation treats the effects of decreased white blood cells following radiation exposure more completely. Figure 10.1 shows the radiation effects on white blood cell counts for ∼1–5 Gy.

Figure 10.1 White blood count (WBC) as a function of time after exposure. The figure shows plots of white blood cell count over time following exposure to different doses of ionizing radiation. These plots summarize data from the Chernobyl accident. 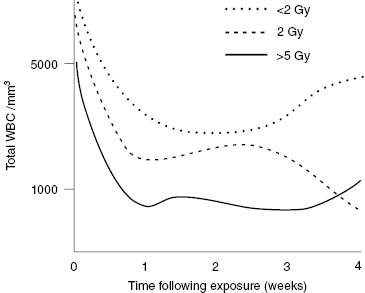 After a significant radiation dose (usually greater than 1 Gy), all components of the blood were adversely affected. Increases in dose result in an increased effect, and the effects are seen earlier. In the case of a whole body exposure from a radiation accident, the loss of white blood cells occurs just at a time when the body’s defenses against infection are most needed. Damage to the skin and intestine make the body particularly vulnerable to bacterial infection during the first 2 weeks following exposure.