Axial non-contrast CT image through the anterior part of middle cranial fossa and at the level of suprasellar cistern.


Axial T1WI MRI at the level of cerebral peduncles.


Axial T2WI MRI at the level of cerebral peduncles.


(A) Axial DWI and (B) ADC map at the level of cerebral peduncles. 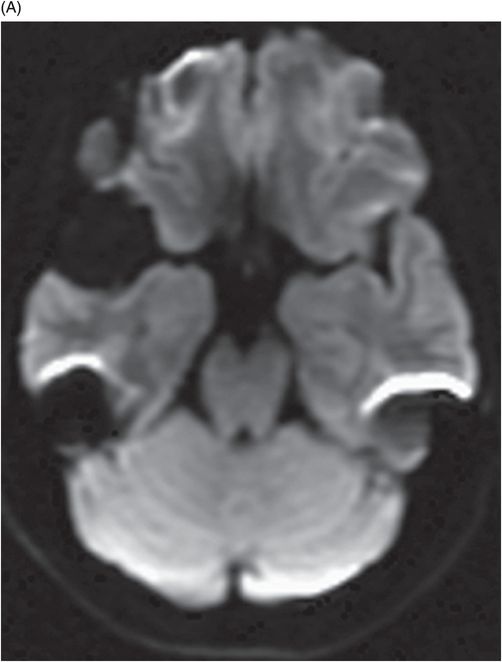 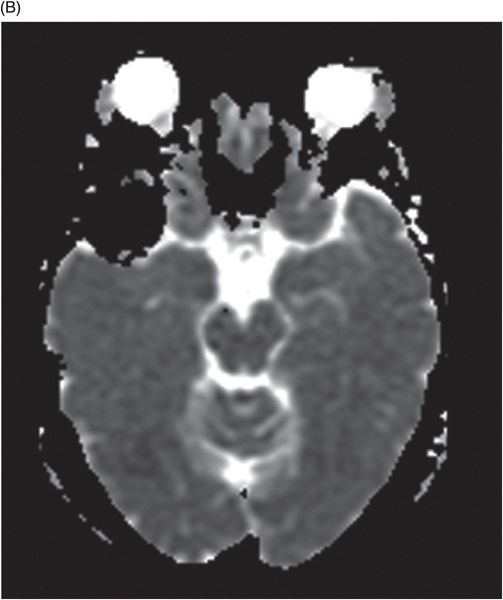 
(A) Axial postgadolinium at the level of anterior part of middle cranial fossa. (B) Coronal image through the frontal horns. 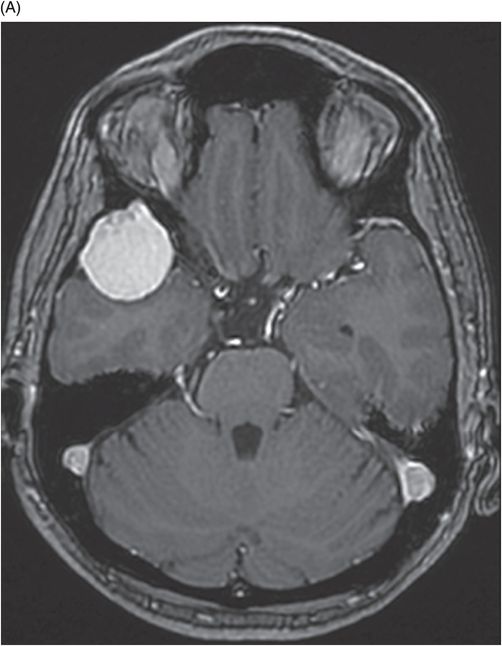 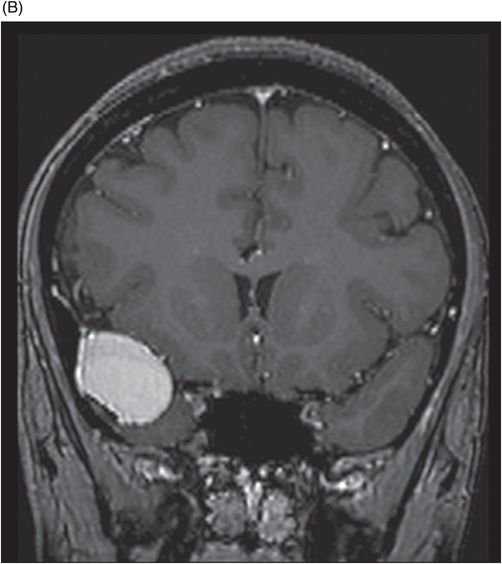 Hyperdense lesion on CT exhibiting T1 hyperintense signal and profoundly hypointense on T2-weighted sequence with T2-dark through effect on DWI are the characteristics of a high proteinaceous content epidermoid cyst known as a white epidermoid.

Neuroenteric cysts can have similar signal characteristics to white epidermoid cysts; however, they are usually found closer to the midline and are more commonly seen in the posterior fossa, anterior to the medulla, cerebellopontine angle cistern, and spine. Supratentorial neuroenteric cysts are rare. However, they can have similar imaging features on CT and T1WI images, but are often hyperintense on T2WI images.

Dermoid cysts are another common differential option for white epidermoids; however, they lack the characteristic fat density on CT scans, and do not suppress on T1WI fat-saturated sequence because of their lack of lipid components.

Although the convexity location may favor an arachnoid cyst, they typically follow CSF signal on all pulse sequences. However, they can be complicated by hemorrhage or presence of high proteinaceous contents and are associated with subdural hemorrhage. However, the lack of scalloping, a commonly seen feature of epidermoid cysts arising in the temporal convexity, makes the diagnosis of arachnoid cyst less likely.

White epidermoid cyst is a rare variant of a congenital inclusion cyst. A typical epidermoid cyst contains desquamated keratin debris and is rich in cholesterol crystals, giving it a pearly white appearance. The underlying cause of the hyperdense appearance on CT or the T1 hyperintense signal in white epidermoid cysts is unknown. However, its characteristic color and appearance has been attributed to paramagnetic effects and hemorrhage, as well as the presence of high proteinaceous contents, calcium soaps with saponification of debris, polymorphonuclear leukocytes, and iron-containing pigment or ferro calcium complexes. The low T2 signal varies with the degree of protein concentration and fluid content. The diverse chemical composition and physical state of the contents can alter diffusion and ADC signal characteristics. According to one case report in the literature, the lack of diffusion restriction has been explained by T2-dark through effect.