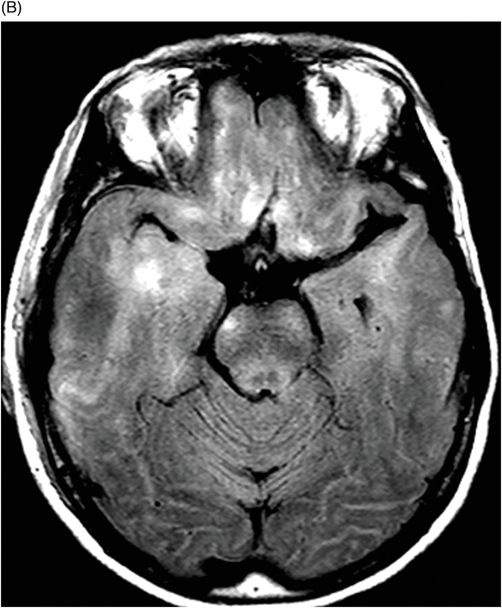 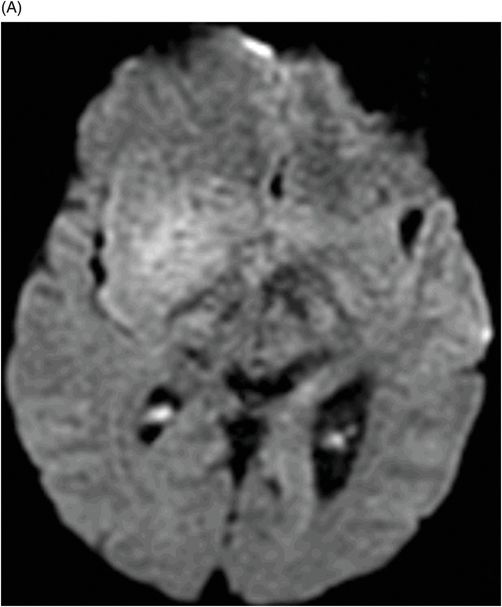 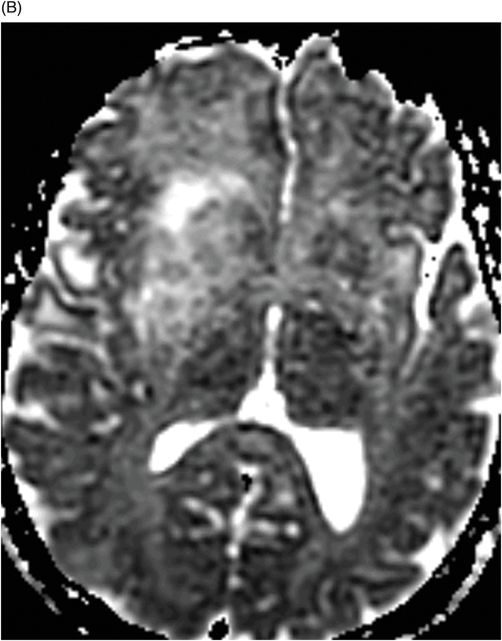 
Axial postcontrast TWI through the level of the midbrain.

The difference between an infiltrating low-grade astrocytoma (ILGA) and a gliomatosis cerebri (GC), from a practical standpoint, is the extent of tissue involvement. When an ILGA involves more than three cerebral lobes, by definition, it becomes a GC. Such an extensive infiltrative pattern has an underlying aggressive pattern, as compared to a typical ILGA. Although small vessel ischemic disease (SVID) in the setting of hypertension and chronic renal disease can have extensive signal abnormality, the geographic pattern of involvement is different. In SVID, the involvement is predominantly limited to white matter in the deep cerebral and periventricular regions. Subcortical involvement may be seen in SVID, but this involvement in the subcortical region is usually patchy and the gray-white differentiation is maintained. Infiltrating lymphoma (lymphomatosis cerebri) may have similar growth patterns, but the tumor is usually hypointense on T2WI and demonstrates enhancement in the involved areas of brain. Diffuse non-specific white and gray matter abnormality can be seen in viral encephalitis as well but the clinic setting is different in viral encephalitis (viral prodrome, fever, and headache and neck rigidity).

Masses consisting of a diffuse, glioma pattern infiltrating an extensive CNS region of three or more cerebral lobes meet WHO criteria for a gliomatosis cerebri. Typically, there is bilateral cerebral and/or deep gray matter involvement that may extend to the cerebellum, brainstem, and in some cases, the spinal cord. This extensively infiltrative aggressive tumor is usually of astrocytic lineage. Gliomatosis cerebri behave like WHO grade III tumors and are either primary or secondary. In primary GC, there is extensive infiltration at the time of presentation, whereas in secondary GC, progressive infiltration occurs over time. Primary GC can be further subclassified as type 1, in which there is extensive infiltrative tumor at clinical presentation with no tumor mass, or type 2, in which there is a tumor mass, in addition to an extensively infiltrative tumor. In this patient, the tumor demonstrates behavior of a type 2 GC.

Although GC can present in any age group, the peak incidence is between 40 and 50 years of age, it has no gender predilection, and it can involve any area of brain. However, GC does have a predilection for the right hemisphere. Clinical presentation is dependent upon the areas of brain infiltrated by the tumor. Headache, memory problems, lethargy, seizures, and focal neurologic deficits are common clinical presentations.

In primary type 1 GC, there is diffuse abnormal FLAIR signal in the areas of infiltrative tumor with any identifiable focal mass. Although the tumor may cause mass effect to the ventricles, there is usually no demonstrable enhancement with contrast. Magnetic resonance spectroscopy demonstrates tumor signature (low NAA, high choline-to-creatine ratio) along the entire region of abnormal FLAIR signal. A mass can be seen either in type 2 primary GC or in type 1 primary GC patients, with dedifferentiation to a higher-grade tumor. The mass usually demonstrates all imaging features of a high-grade tumor (such as heterogeneous enhancement, increased rCBV, and subtle diffusion restriction). Because of extensive involvement, surgery is not a treatment option. This tumor is treated by whole brain radiation plus temozolomide and nitrosoureas.