Axial CT image of the brain.


Sagittal T1WI of the brain.


Axial T2WI of the brain. 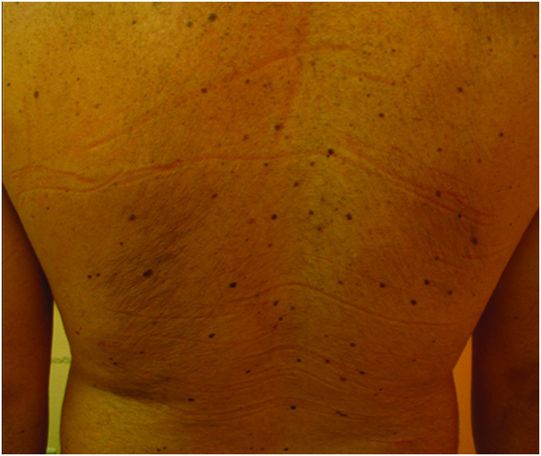 Neurocutaneous melanosis (NCM) is a rare congenital disorder characterized by the presence of large or multiple congenital melanocytic nevi (CMN) associated with CNS melanocytic lesions. In 1861, Rokitansky originally described NCM in a 14-year-old girl with a congenital nevus, mental retardation, and hydrocephalus. Demonstration of a T1-hyperintense signal in the absence of a mass or edema, in a symptomatic patient with multiple satellite nevi, is suggestive of NCM.

Congenital melanocytic nevi are nevi usually present at birth or within the first few weeks of life. These lesions are classified as neural crest-derived hamartomas and are derived from pigmented cell malformations, formed during ontogenesis. The disease has been associated with deregulation of hepatocyte growth factor/scatter factor, a cytokine that stimulates the proliferation, migration, and morphogenesis of cultured epithelial cells and is also involved in the distribution and proliferation of melanocytes.

The original diagnostic criteria for NCM was originally proposed by Fox in 1972 and further revised by Kadonaga and Frieden. The criteria are as follows: 1) large (currently or estimated to become no less than 20 cm in diameter in adults or 6–9 cm in infants); or 2) multiple (≥ 3) CMN associated with meningeal melanosis or CNS melanoma; no evidence of cutaneous melanoma; and no evidence of meningeal melanoma except in patients whose skin examination reveals no malignant lesions. However, a definitive NCM diagnosis can only be made based on histologic confirmation of the CNS lesions.

Patients with NCM usually have more than three CMN on their head, neck, or dorsal spine; and the majority (two-thirds) of patients have a giant bathing trunk melanocytic nevus in the lumbosacral region. Giant CMN occur in approximately 1/20,000 newborns and are defined as those that are expected to grow to a diameter of at least 20 cm in adulthood. Patients with giant CMN also have a higher risk for developing meningeal and cutaneous melanoma.

Primary leptomeningeal melanoma, which typically results in meningeal pigmented lesions, differs from NCM. In patients with NCM, the meninges are not typically involved and melanin deposits typically occur in the brain parenchyma, choroid plexus, and along the ependymal lining. Melanin parenchymal deposition most likely represents melanocytes tracking along the perivascular spaces. The most frequent location of melanin accumulation in the CNS is the anterior temporal lobes, especially in the region of the amygdala. Other less common locations include the cerebellar hemispheres, thalami, the basifrontal region, midbrain, and spinal cord.

Most cases of NCM are sporadic, commonly occurring in Whites with no gender predilection. Complications of patients with NCM can occur in two peaks, the first representing the majority of patients, usually occurring before three years of age and the second, during the second to third decades of life. In the first two years of life, patients with NCM typically develop neurologic manifestations related to increased intracranial pressure or seizures. Other symptoms include irritability, lethargy, emesis, seizures, photophobia, papillary edema, cranial nerve palsies, external ocular motor and facial nerve involvement, pruritus, hypertrichosis, and ulceration of the skin lesions. However, the most serious complication is development of a malignant melanoma.

In rare cases, symptoms begin in adulthood, and some patients remain asymptomatic. Hydrocephalus occurs in the majority of patients and is related to either meningeal thickening, CSF outflow obstruction, or decreased CSF reabsorption. Other reported complications include subdural or parenchymal hemorrhage, and neuropsychiatric symptoms including depression and psychosis. Patients with spinal involvement may develop symptoms of myelopathy, syringomyelia, spinal arachnoiditis radiculopathy, and bowel or bladder dysfunction.

Other diseases have been described to be associated with NCM such as Dandy-Walker malformation (with an even more worrisome prognosis), lissencephaly, encephalocraniocutaneous lipomatosis, hemimegalencephaly, and corpus callosum agenesis.

Malignant melanoma may occur in 40–60% of the patients with NCM; the majority of patients die within three years from benign melanocytic cell overgrowth or malignant melanoma development. On gross examination, the lesions have dense black-brown material overlying the affected surfaces and areas of focal nodularity. On histologic examination, NCM resembles CMN with polygonal cells with prominent nucleoli and cytoplasmic melanin with signs of Virchow-Robin space invasion.

On CT, melanin deposits may appear as subtle areas of high attenuation, which are difficult to appreciate unless there is progression to melanoma. In cases of extensive melanosis, patients may present with hydrocephalus and leptomeningeal enhancement may be seen.

Magnetic resonance imaging is far more sensitive than CT for demonstrating NCM changes and should ideally be performed within the first four months of age, before normal brain myelination, which may obscure melanin deposits. Magnetic resonance imaging findings include T1 hyperintense foci (typically 3 cm or less in size) within the brain parenchyma and meninges. These foci are most commonly found in the anterior temporal lobe (typically in the amygdala), cerebellar white matter, cerebellar nuclei, and brainstem. Leptomeningeal enhancement has been reported in cases of NCM and if associated with hydrocephalus may suggest diffuse leptomeningeal spread. Magnetic resonance imaging is also important to rule out tethered spinal cord, lipomas, and vascular malformations.

Hypoplasia of the cerebellum and pons may be seen and is usually associated with melanosis in these locations. Spinal and intracranial arachnoid cysts and spinal lipomas have also been described in cases of NCM. Degeneration into malignant melanoma is indicated by progressive growth, surrounding vasogenic edema or mass effect, or development of central necrosis. Signs of malignant degeneration include the presence of leptomeningeal or intraparenchymal lesion enhancement or focal nodular or thick plaque-like enhancement.