The purpose of radiation protection regulations is to ensure the safe use of ionizing radiation. This involves balancing the benefits of radiation applications with the risks. Regulations are established by national or state governments and have the force of law with civil and or criminal penalties for violations. Regulations historically require long and complex procedures prior to becoming law. Recommendations are promulgated by extra-government organizations interested in radiation safety. They do not have the force of law but usually are the basis for government regulations. This chapter covers both regulations and recommendations regarding safe radiation use.

The benefits of radiation in medicine come from improved diagnostic information. The risk comes primarily from an increased risk of cancer. Regulators must weigh the benefits and risks of using ionizing radiation for workers, patients, and the public. Current regulations do not place limits on the amount of radiation delivered to a patient. This is because the benefit and risk to an individual are evaluated by the physician ordering the procedure. Regulations usually divide exposures to humans into exposures to the general public and exposures to those working with radiation. Radiation exposure limits to radiation workers are higher than the limits for the general public because they presumably are receiving an additional benefit (their job) in return for the slightly higher risk associated with the higher allowed radiation exposure.

Risk is often expressed as the probability or likelihood that an event will occur. In this section, we will discuss the probability of long-term, stochastic, detrimental biological effects occurring in a person’s lifetime. These stochastic effects include genetic damage and carcinogenesis.

Example of a numerical application of absolute risk and relative risk:

Consider a population with a natural absolute risk for incidence of a disease of 20,000 cases in every 100,000 individuals. After this population is exposed to ionizing radiation, there are 20,300 disease cases observed.

The BEIR (Biological Effects of Ionizing Radiations) Committee. The committee was formed by the National Research Council of the National Academy of Sciences. The goal of the council is to advise the U.S. government on the effects of ionizing radiation on human health. A recent report from the BEIR Committee is BEIR VII Phase II (2006). One objective of the BEIR VII report was “to develop the best possible risk estimate for exposure to low-dose, low linear energy transfer (LET) radiation in human subjects.”
International Commission on Radiological Protection (ICRP). This is a multinational, independent organization of experts in radiologic protection. The recommendations and guidelines produced by the commission are incorporated into the regulations and policies of many nations. A noteworthy publication in the field of radiation protection is ICRP 60 (ICRP 1990). A later report, ICRP 103 (ICRP 2007) has now been issued and supersedes ICRP 60. In the later report, data from the years since the issue of ICRP 60 was evaluated. The result was that the basic recommendations of ICRP 60 were unchanged except that the estimated risk of hereditary effects was lowered in ICRP 103.
United Nations Scientific Committee of the Effects of Atomic Radiations (UNSCEAR). The committee is responsible for advising the General Assembly of the United Nations regarding ionizing radiation. The reports of the committee are widely used for evaluation of risk and formulation of policy.
National Council of Radiological Protection and Measurements (NCRP). This organization was founded by the U.S. Congress. Its mission is to advise the U.S. government in matters pertaining to ionizing radiations. Its mandate specifies that it should cooperate with the ICRP and other agencies in the field of radiation protection.

These organizations have established recommendations based on data from human exposures to radiation, animal studies, and other laboratory data.

A primary source of data used in committee reports such as BEIR VII and ICRP 103 is from the Life Span Study (LSS) in which the incidence of disease in the survivors of the nuclear weapon attacks on Hiroshima and Nagasaki has been tracked. The LSS data have been used to estimate quantitative risks of exposure to ionizing radiation.

The LSS data are unique for several reasons. The exposed population is large and includes approximately 100,000 individuals. People of all ages and both sexes were exposed to ionizing radiation during the attacks. The range of radiation exposures was large and included many who received relatively low doses (5–100 mSv) of radiation. The low doses are in the same range that can be expected from some diagnostic medical procedures. The LSS is also unique in that incidence and mortality data for cancer and other diseases have been tracked for nearly 70 years.

Dose–response models are used to estimate the quantitative risk associated with an exposure to ionizing radiation. Obtaining a suitable model for risk associated with low doses has been controversial. For many survivors of the attacks on Nagasaki and Hiroshima, the exposure to radiation resulted in a high dose delivered at a high-dose rate. Occupational exposures and most radiological exposures involve low doses and low-dose rates. Yet the high dose, high-dose rate data from the LSS are still the primary source of data used for the estimation of risk factors due to low doses and low-dose rates.

To relate the high dose, high-dose rate data to low dose, low-dose rates, the dose and dose-rate effectiveness factor (DDREF) is used. Both the ICRP and BEIR Committee use a DDREF value of approximately 2. This used to account for the fact that the body repairs some radiation damage if the radiation exposure is spread over a longer time period. The assumption is that exposure to high doses and high-dose rates, such as found in nuclear weapon attacks, is approximately twice as likely to produce stochastic detrimental effects as low dose, low-dose rate exposures. In Fig. 15.1, the difference in the slope between the linear no-threshold (LNT) (high-dose rate) line and the LNT (low-dose rate) line in the figure is the DDREF. 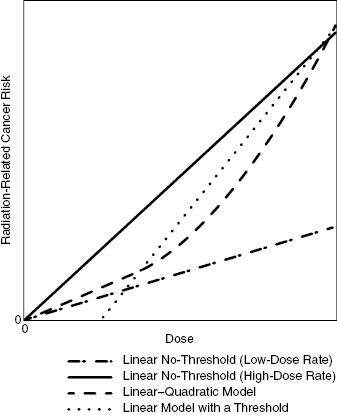 There are several dose-rate models that may be used to extrapolate from the high-dose data to the low-dose range where most occupational and radiological exposures are found. In the linear–quadratic model, the dose–response is nearly linear at low doses and then the slope increases at increasing doses. Some diseases, notably leukemia, are best modeled with this type of curve fit.

The model that is currently used by the BEIR Committee and the ICRP to model the risks for solid cancers is the LNT model. In this model, there is no threshold and the line crosses the origin. In the LNT model, it is assumed that any exposure to ionizing radiation carries a risk proportional to the dose. The LNT model is easy to use and is also the most conservative at relatively low doses (less than 500 mSv). In the latest reports, the ICRP and BEIR Committee still maintain that they do not have enough reason to depart from the LNT model. It should be noted that the ICRP and BEIR VII Committee state that the LNT dose–response model should only be used for radiation protection purposes. The model should not be used for epidemiological purposes or for estimation of risk to an individual.

There is some evidence that the LNT model does not provide good estimates of the dose–response in the low-dose range. Notice in Fig. 15.2 and Fig. 15.3 that the error bars in the low-dose range actually extend below 0.0 ERR. This could possibly indicate that low doses actually have zero risk or even less than zero risk. In other words, low doses of radiation could have a beneficial impact on health. The hypothesis that low doses of radiation actually reduce the risk of disease is known as hormesis. There is some evidence that exposure to low doses of radiation impart some degree of radioresistance to the organism being irradiated. The existence of hormesis in humans is inconclusive and has generally not been incorporated into radiation protection policy. 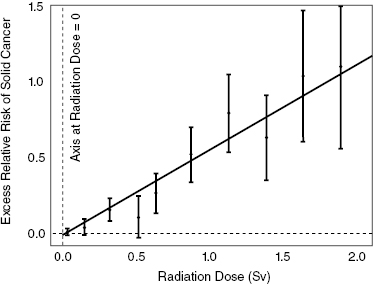 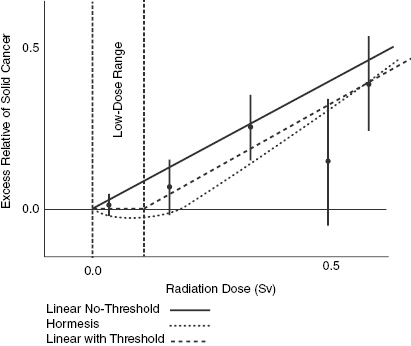