Baseline, prior to initiating gonadotropin stimulation. Ovary with antral follicles 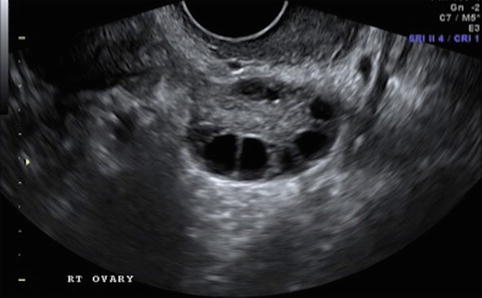 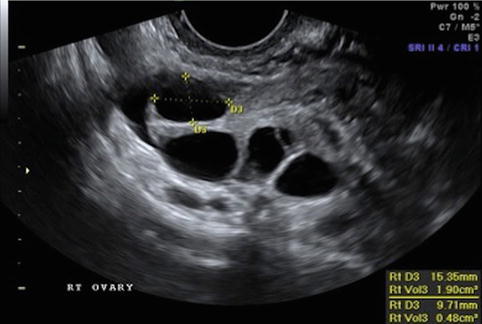 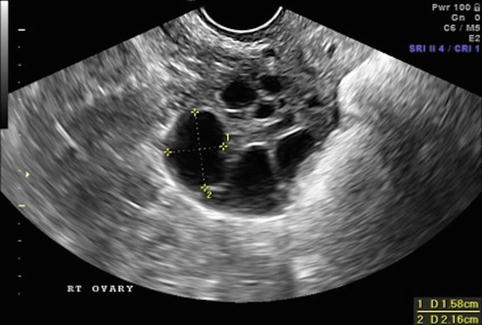 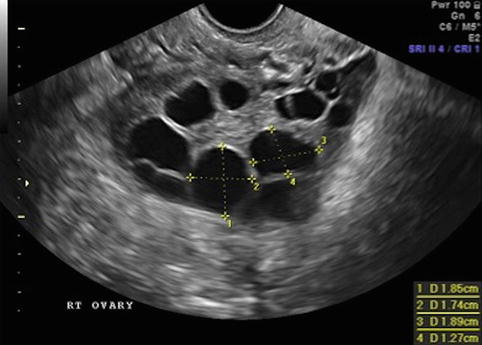 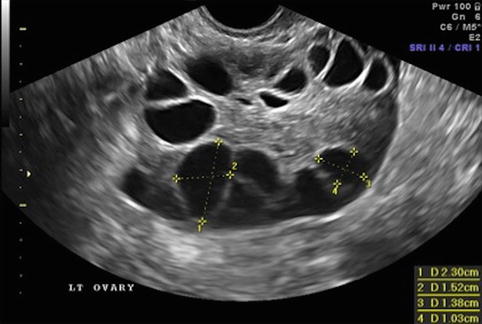 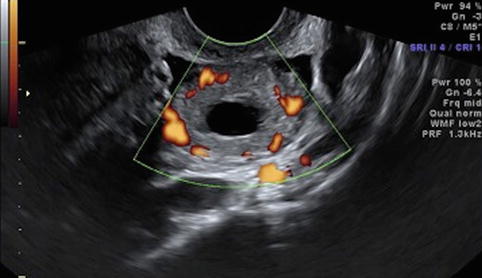 During ovulation induction it is realistic to recruit five to ten ovarian follicles in each ovary; however, the number, rate of growth of each follicle, and the number of stimulation days can vary greatly.
After 6–7 days of gonadotropin stimulation, follicles measuring more than 10 mm are expected.
Once a dominant follicle measures greater than 12 mm, follicular growth of 2 mm (1–3 mm) per day is expected [12]. Growth continues until follicular maturation at 18–21 mm, and at that point the oocyte inside is ready to ovulate, that is, complete meiosis, and be released in preparation for fertilization.

The criteria used for triggering ovulation-inducing final oocyte maturation vary between protocols, but all aim to produce mature oocytes to be fertilized; it is important to keep in mind that mature oocytes are those that have completed meiosis I, extruded the first polar body, and rearrested in metaphase of meiosis II. Most commonly hCG is administered to mimic the endogenous LH surge to provoke meiotic re-initiation from the oocyte’s prophase I resting state. As noted, protocols vary and are often altered, but most commonly ovulation is provoked when ≥3 follicles ≥17 mm are identified on ultrasound. Another approach many clinicians employ is to trigger final oocyte maturation when ≥3 follicles is observed, each with a maximum diameter of 18 mm, or, finally, when ≥1 follicle of ≥18 mm and three follicles of ≥15 mm are identified. More complex criteria have taken into consideration serum estradiol levels; hCG is administered when the leading follicle reaches 18–20 mm and the coincident serum estradiol level suggests satisfactory follicular development. In addition, induction of final oocyte maturation has been performed in the presence of at least one follicle ≥20 mm and a serum estradiol level ≥1,200 pg/ml. Finally, hCG has been administered in the presence of at least one follicle ≥20 mm or a serum estradiol level ≥1,200 pg/ml [13]. There are no data to suggest that any one protocol is significantly superior to any other, and protocols will vary based on individual physician preferences and patient responses to stimulation.
In summary, for timing of hCG administration, the number of adequate size follicles (12–24 mm) appears to be more important than the size of the leading follicle [14]. It has been shown that when hCG is administered in the presence of a leading follicle >20 mm, the fertilization rate is greater and the embryo implantation rate higher than when hCG is given with a leading follicle of smaller size [15].

How to Predict Retrieval of Mature Oocytes?

Follicular size and the volume of follicular fluid have always been recognized as possible predictors of oocyte quality, specifically, oocytes that will be fertilized and result in embryos that implant and result in a live-born infant. In one study, embryo quality, defined as decreased embryo fragmentation and increased cleavage rate, and the implantation rate was higher, and clinical and ongoing pregnancy rates tended to be higher when hCG was administered after a larger follicle size was observed [16]. The follicular volume together with follicle number are the only two independent predictors of the number of oocytes that will be retrieved, the fertilization rate, and the number and morphological quality of the embryos developed [17].
Attempts to find a universally accepted threshold of a worth-to-be-punctured follicle size, however, has been disappointing due to conflicting outcomes. What is accepted is that a large follicle is more likely to lead to the retrieval of a mature oocyte than a smaller follicle. The correlation between the follicle size and the likelihood of retrieving a mature oocyte may be the observable physical manifestation of the idea that larger follicles have completed the maturation process and released the oocyte-cumulus cell mass as a free-floating structure in the antral fluid just before follicle rupture [18]. According to Teissier [19], 14 mm diameter should be considered the threshold follicle size to get an acceptable chance of finding meiotically competent oocytes at retrieval, both in normal and polycystic ovaries. For IVF patients, Bergh et al. found oocytes in follicles with a mean diameter >16 mm to have a significantly higher fertilization rate (71.4 %) compared to oocytes from smaller follicles (58.1 %). Interestingly, in that same study, the authors note that once an oocyte is fertilized, embryo cleavage rates were similar (95.4 and 93.9, respectively), but pregnancy rates for the two groups were dramatically different, 47 and 15 %, respectively. For intracytoplasmic sperm injection (ICSI) patients, the fertilization rate was 72.0 and 71.1 % for oocytes from large and small follicles, respectively; the corresponding cleavage rate was 93.0 and 91.1 %, and the pregnancy rate for the two groups was 41 and 42 % [20]. Follicles measuring 11–15 mm were observed to have a 50 % chance of yielding a mature oocyte [21].
Mature metaphase II (MII) oocytes are more frequently retrieved from 16 to 22 mm diameter (2–5 ml volume) follicles, and MII oocytes tend to develop the best morphologically scored embryos. On the contrary, follicles with a mean diameter above 22 mm result in lower recovery of mature, fertilizable oocytes as they often contain postmature eggs, postulated to result from the development of intrafollicular atresia and degenerative phenomena [22].
Other investigators have also observed a correlation between oocyte fitness and ultrasound-measured size prior to retrieval. A higher proportion of immature germinal vesicle (GV) stage oocytes, for example, are found in smaller follicles, particularly follicles below 12 mm of mean diameter. This is not a universal finding, however, since even small follicles can generate mature MII oocytes [20, 23]. Wittmaack et al. [14] found the optimal follicle volume to be >1 ml, which corresponds to ≥12 mm, and the maximum volume to be 6–7 ml, corresponding to a 24 mm follicle. They observed a higher oocyte recovery rate, higher fertilization rate, and higher cleavage rate for follicles in this interval. Oocytes from larger follicles are reported to allow higher fertilization rates and generate better embryos.
Conversely, in a prospective study including 9,933 follicles from 535 IVF cycles, it was observed that oocytes from follicles with volume <1 ml (<12 mm diameter) had a significantly lower fertilization rate than oocytes from larger follicles, but when fertilized they yielded embryos of comparable quality; in fact, no significant differences in the implantation, clinical pregnancy, or live birth rates per cycle were detectable from embryos derived from oocytes measured in small or large follicles [24].
In these studies, however, it was not possible to identify a clear relationship between follicle size and morphological quality of the in vitro-produced embryos. This may be due to the fact that follicles with a volume within a certain interval contain oocytes that lead to embryos of comparable morphologic scores and/or to the fact that the male gamete contributes to embryo quality as well and needs to be considered along with the oocyte.
Importantly, follicular size, volume, morphology, or vascularity does not provide enough information to ascertain oocyte quality when quality is defined as the conception of a euploid child. The best approximation of quality, however, is that a follicle with at least a diameter of 14 mm, more than 0.6 ml volume, and well-developed vascularity houses an oocyte more likely to be successfully fertilized.

During the proliferative phase of the menstrual cycle, many factors have been studied and identified to contribute to a successful pregnancy among patients undergoing assisted reproduction. The aim of 2D monitoring of the follicular phase in ART is not solely to monitor follicular development, but also to monitor endometrial development. Predicting the probability of pregnancy by assessing the degree of endometrial development on sonography has been the objective of numerous studies.
Endometrial thickness and pattern, in response to estrogen secretion by the ovarian follicles, varies throughout the menstrual cycle. The endometrium is thin immediately after menstruation (2–5 mm), thickens during the proliferative phase, is trilaminar before ovulation, and is thick and echogenic in the secretory phase of the cycle. A small amount of endometrial fluid (0.5–1.0 mm film in the middle of the cavity), thought to be mucus, can be seen before ovulation, is considered normal, and rapidly disappears. However, significant endometrial fluid at the time of an embryo transfer (ET), often visible in the presence of hydrosalpinges, is associated with a poorer prognosis. When this observation is made, freezing of all the embryos is frequently considered to provide time to optimize management.
With respect to endometrial differentiation, sonography predictors that are often studied include endometrial blood flow, endometrial echo pattern, and endometrial thickness.
The thickened endometrium provides the critical site for embryo attachment. Controversies exist, however, regarding the clinical significance of observed variations in endometrial thickness in relation to pregnancy rates (PR) during IVF. Some studies reported no correlation between endometrial thickness and PR, while others suggest a positive correlation between endometrial thickness and PR, reporting significantly greater endometrial thicknesses occur in successful IVF cycles compared to unsuccessful cycles. Possible reasons for this observed discordancy in results may be attributed to different treatment protocols and/or the different etiologies of infertility. All studies, however, seem to agree that a “thin” endometrium is detrimental to the implantation and development of a pregnancy [25]. Patients with a thin endometrium present the clinician with a dilemma, therefore, whether to continue the cycle despite a possibly reduced chance of pregnancy or to cancel the cycle and cryopreserve the embryos [26]. Most recently a meta-analysis from 2011 found a significant difference in mean endometrial thickness on the day of hCG administration between IVF patients achieving pregnancy versus those failing to achieve a pregnancy; a difference of 0.4 mm (95 % CI 0.22–0.58) and an odds ratio for pregnancy of 1.40 (95 % CI 1.24–1.58) were reported [27].
The use of endometrial blood flow in predicting endometrial receptivity has also been studied. Presence of both endometrial and subendometrial blood flow correlates with higher implantation and pregnancy rates, and the absence of endometrial and subendometrial blood flow is associated with a thinner endometrium and is associated with higher uterine artery resistance [28, 29].
Studies indicate that echogenic patterns of the endometrium reflect histologic processes that are believed to be involved in the establishment of receptivity as well. This may explain the reported association between premature hyperechogenic patterns of the endometrium and poor implantation rates [30
Only gold members can continue reading. Log In or Register to continue