Axial postcontrast T1WI through the level of the basal ganglia.


(A) Axial DWI and (B) ADC map through the level of the basal ganglia. 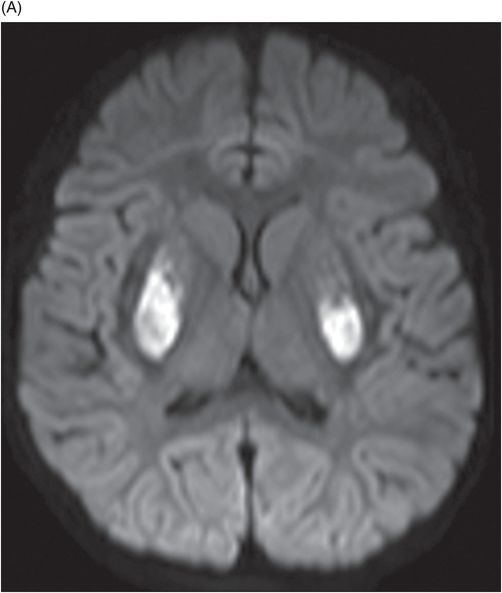 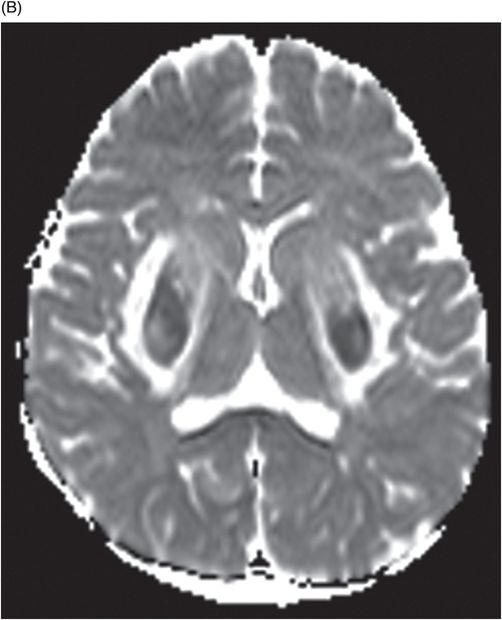 
Axial T2WI through the level of the basal ganglia.


Axial FLAIR through the level of the basal ganglia.


(A) Axial T1WI and (B) Axial T2WI through the level of the basal ganglia. 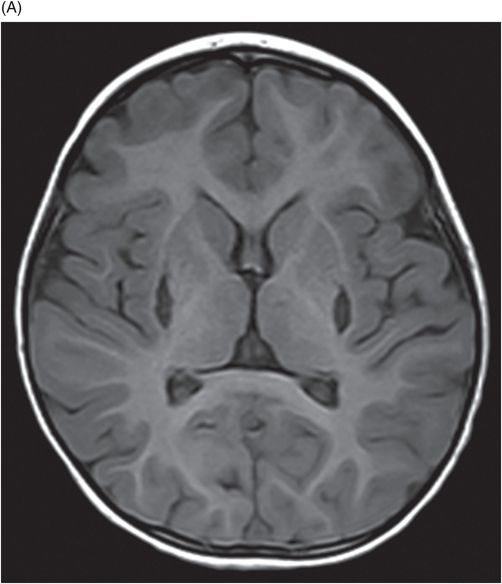 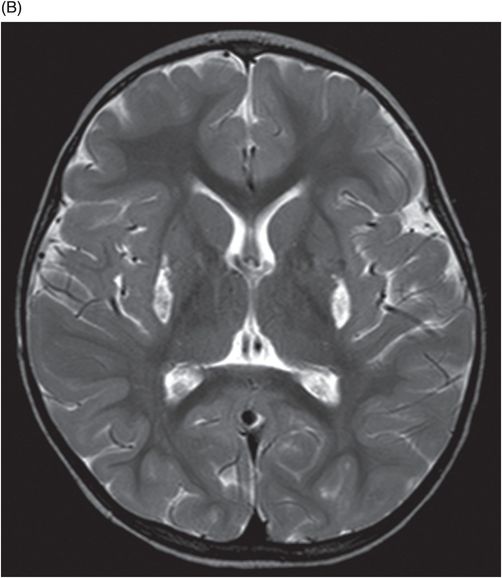 
Axial DWI through the level of the basal ganglia.

Toxic and other metabolic diseases

Clinical presentation that includes acute-onset history of diarrhea, acute renal failure, and fluctuating altered level of consciousness is characteristic of hemolytic uremic syndrome (HUS). Hypoxic ischemic injury and acute necrotizing encephalopathy can have similar imaging findings and a predilection for the deep gray nuclei, as do toxic and metabolic conditions, and mitochondriopathies. A clinical presentation of diarrhea that triggers a cascade of events in a previously healthy child, with positive PCR, and normal developmental milestones excludes hypoxic, metabolic, and other entities mentioned in the differential diagnoses. Atypical or severe form of PRES can have similar presentation but predominantly involves the parieto-occipital white matter. However, isolated involvement of deep gray nuclei with sparing of white matter makes PRES a remote possibility.

Often seen in children between the ages of one and four years, hemolytic uremia is a multisystem disease manifesting with diarrhea and acute renal failure. In 50% of patients, it is caused by enterohemorrhagic strains of Escherichia; however, it can also be seen with Shigella dysenteriae strains and pneumococcal infections. Genetic causes of HUS are a small but important spectrum of its etiology and secondary to alterations in complement regulators. The disease is mediated by verotoxin-induced endothelial damage, affecting the small vessels of the brain, which results in hemorrhage and infarcts.

Central nervous system manifestations of this disease can be seen in up to 20–50% of cases and present with seizure, altered level of consciousness, and brainstem symptoms. Although CNS manifestations cannot be completely explained by the presence of underlying toxins, some authors believe that the encephalopathy is due to electrolyte imbalance and hypertension.

Computed tomography is the initial imaging modality of choice to detect gross infarcts or hemorrhage. However, MRI best depicts HUS imaging features and disease prognosis. The lesions tend to have a nearly symmetric distribution pattern or less frequently, unilateral. The cortical and parieto-occipital white matter changes mimic PRES. Most imaging studies describe the predilection for basal ganglia with involvement of the dorsolateral aspect of lentiform nucleus being the most characteristic imaging finding, as demonstrated in this patient. Central deep white matter tract hyperintensity on T2-weighted and FLAIR sequences, thalamic, brainstem, and cerebellar involvement have been described in the literature. Cytotoxic edema is best detected on DWI, correlates with the disease severity, and predicts areas with irreversible brain damage. The increased T2 and FLAIR hyperintense signal changes in the affected white matter are often reversible and represent vasogenic edema. Few case reports also describe cortical involvement with gyriform T1 hyperintensity in the acute and subacute phases of the disease. The T1 hyperintensity has been attributed to coagulative necrosis, increased protein concentration, and presence of blood products. The overall neurologic outcome of this illness is generally favorable in the pediatric age group.