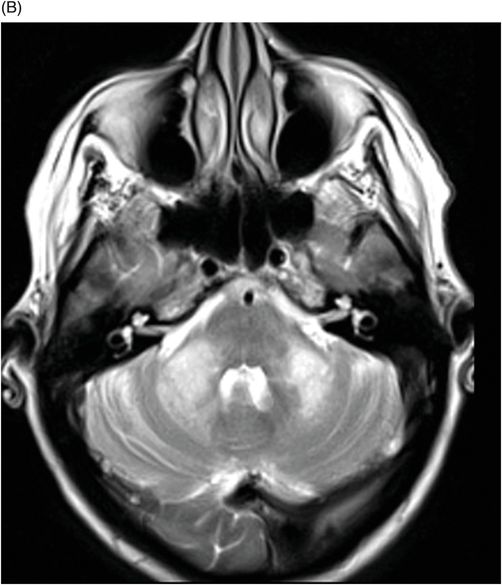 
(A) Axial DWI and (B) ADC map through the level of the middle cerebellar peduncles. 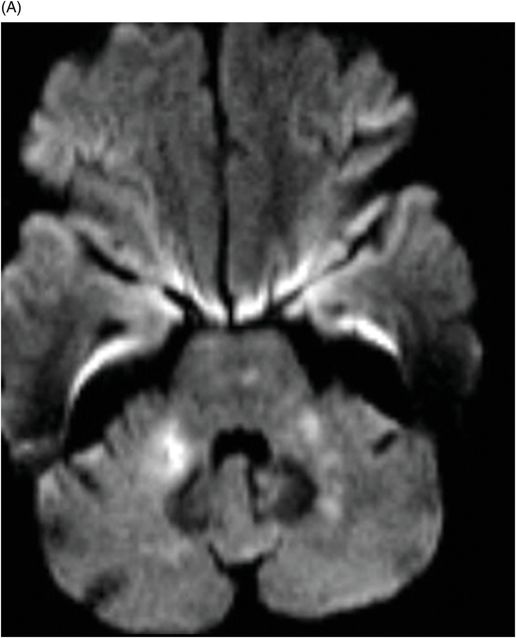 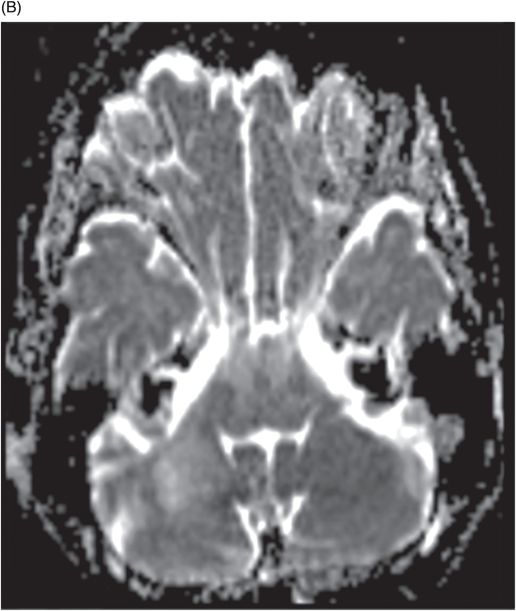 
(A) Axial T1WI postcontrast and (B) Coronal T1WI postgadolinium through the level of the middle cerebellar peduncles. 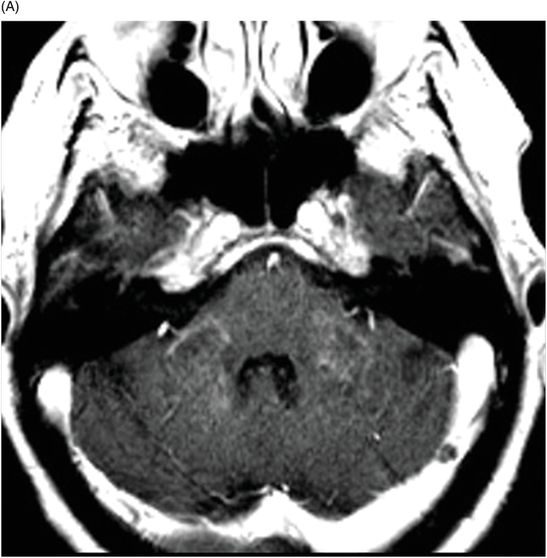 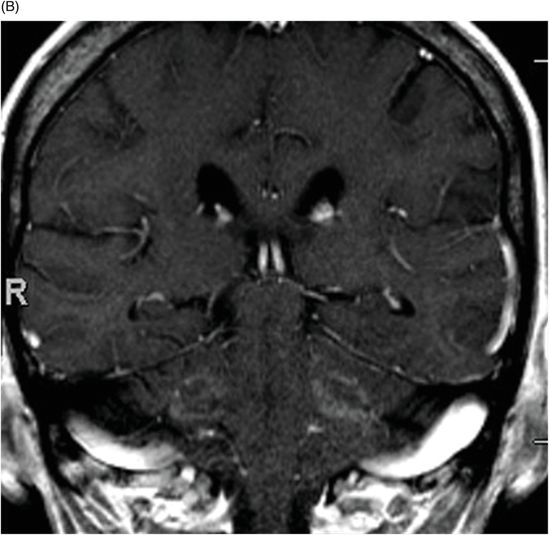 Fig. 39.1: (A) Axial T1WI and (B) T2WI images demonstrated bilateral, middle cerebellar peduncle lesions with hyperintensity on T2WI and predominant hypointensity on T1WI. Fig. 39.2: (A) Axial DWI and (B) the ADC map showed small areas of restricted water molecule diffusion within the lesions. Fig. 39.3: (A) Axial T1WI postcontrast and (B) Coronal T1WI postgadolinium images demonstrated enhancement at the margin of the lesions.

The combination of an existing diagnosis of rheumatoid arthritis, history of methotrexate use, and classic imaging appearance is suggestive of progressive multifocal leukoencephalopathy (PML). As classic PML typically does not demonstrate enhancement, the presence of enhancement is suggestive of immune reconstitution inflammatory syndrome (IRIS)-associated PML.

The most common imaging manifestation of PML is asymmetric, multifocal, bilateral, confluent supratentorial lobar white matter, but because JC virus has tropism to oligodendrocytes, any area of the brain may be affected. In the posterior fossa, the middle cerebellar peduncle is most commonly involved.

Progressive multifocal leukoencephalopathy is a subacute CNS infection caused by reactivation of the John Cunningham (JC) virus, a latent polyomavirus present in the majority of adults. Most reported cases of JC virus reactivation occurred in patients with AIDS, or hematologic or solid cancers, or in transplant recipients on immunosuppressant therapy. Less frequently, PML has been described in patients with chronic inflammatory joint diseases associated with autoimmune disorders. Among these autoimmune diseases, lupus is the most commonly described disorder. Other associated conditions susceptible to PML include rheumatoid arthritis (0.25% of PML cases), Wegener granulomatosis, dermatomyositis, polymyositis, and scleroderma.

Typical PML lesions located at the subcortical white matter with relative sparing of the adjacent gray matter can be best evaluated on T2WI sequences. Classic PML lesions are hyperintense on T2WI and hypointense on T1WI. Low T1 lesion signal is typical of PML. As the disease progresses, lesions enlarge over time with an advancing edge that typically demonstrates restricted diffusion from swollen oligodendrocytes. The central component of a large PML lesion gradually cavitates and becomes cystic in nature, demonstrating nulling of CSF signal on FLAIR. There may be areas of microcysts within the relatively recent areas of involvement that can be best demonstrated on T2WI sequences. The key observation is absence of mass effect, given the size of PML lesions.

The profound demyelination, in the absence of inflammation, gives PML lesions a visually striking histopathologic appearance. Expectedly, there is no associated enhancement in a classic PML lesion. However, immune system reconstitution can occur, either because of antiretroviral therapy use to treat AIDS, or from discontinued use of immunosuppressive drugs in non-HIV patients, allowing the body to mount an antiviral inflammatory response. As a result, an immunoregulatory response can be visualized as subtle mass effect with patchy areas of enhancement on imaging, as seen in this patient.