Our patient was an infant boy in the lowest percentile for height and developmental delay. 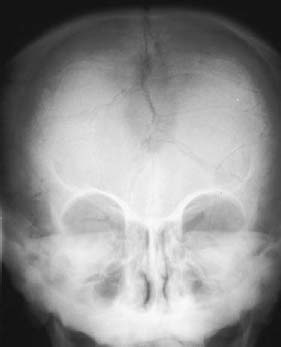 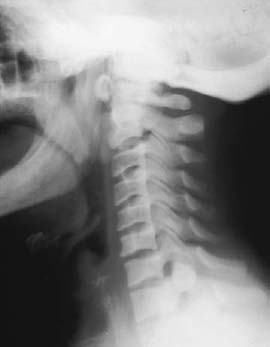 An anteroposterior image of the skull (Fig. 40A) shows multiple wormian bones. A lateral cervical spine radiograph (Fig. 40B) demonstrates an obviously flattened and sclerotic skull base. There is basilar invagination (the clivus-canal angle is < 150 degrees). The mandibular angle is obtuse.

Pyknodysostosis is a rare (fewer than 130 cases described) congenital disorder with autosomal recessive transmission, the clinical, and some radiographic, manifestations of which were first described by Maroteaux and Lamy in 1962. Patients with this syndrome have patchy to diffuse osteosclerosis.

Pyknodysostosis is an autosomal recessive congenital abnormality resulting in mutations in the CTSK gene at 1q21, which codes for cathepsin K.

Cathepsin K is a lysosomal cysteine protease that plays a key regulatory role in bone metabolism, abnormalities of which interfere with bone resorption and remodeling. Bone resorption is further compromised by diminished osteoclast activation secondary to a global reduction in interleukin-1 secretion.

Males are affected twice as often as females. Patients are generally of short stature, with slightly misshapen skulls that have frontal and occipital bossing. Often the maxilla is small, as is the mandible, giving rise to a typical facial appearance of a receding jaw and a beaked nose. The teeth are frequently stained yellow and malformed (dysodontiasis).