A 45-year-old man presented with a 1-month history of chest pain. 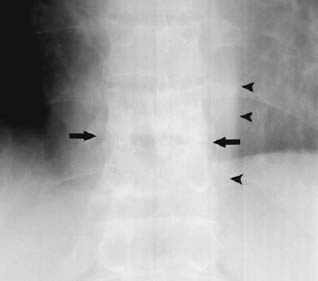 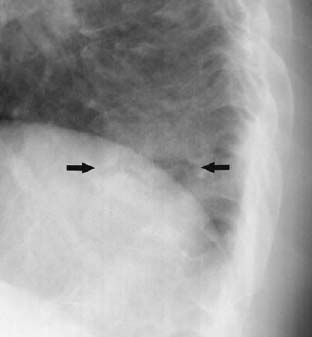 Anteroposterior (AP) (Fig. 72A) and lateral (Fig. 72B) views of the lumbar spine show destruction of the end plates at the T11/T12 disk space (arrows), with narrowing of the intervertebral disk space and mild irregular sclerosis. The AP view shows a left-sided paraspinal soft-tissue mass (arrowheads).

Diskitis refers to infection of the intervertebral disk space that occurs more often in children than in adults. It commonly involves the end plates of adjacent vertebral bodies and is thus also termed spondylodiskitis. Predisposing factors for spontaneous diskitis include concomitant infection at a primary site and immunocompromised states, such as advanced age, renal failure, and diabetes mellitus. Diskitis can also occur in the postoperative setting in up to 3% of spinal surgery cases.

Pyogenic diskitis can be due to a variety of different organisms but is most frequently secondary to Staphylococcus aureus.

In the setting of endocarditis, Streptococcus is the most frequent causative agent, whereas Pseudomonas aeruginosa predominates among intravenous drug abusers.

The most common presenting features are back pain, localized tenderness, stiffness, and fever. These symptoms may occur following infections of the genitourinary, gastrointestinal, or respiratory tract. The lumbar spine is more often affected than the thoracic spine. Neurologic symptoms such as sciatica and paraparesis may also be present. Symptoms can be insidious, and diagnosis is often delayed for weeks or months.