A 16-year-old boy presented with pain in the lower leg. 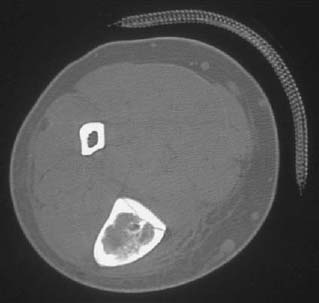 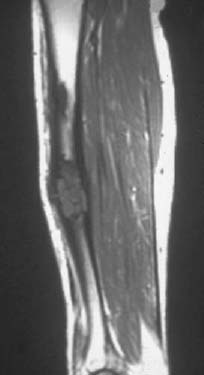 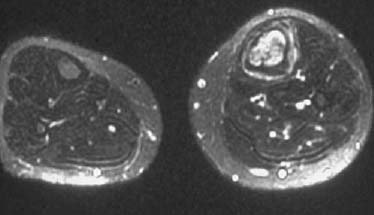 The lateral radiograph of the tibia (Fig. 49A) shows a bubbly, mildly expansile, lytic lesion of the midtibia with surrounding sclerosis. The dominant lesion appears to involve the cortex and medullary canal. A smaller satellite lesion is identified proximally that appears to involve the cortical bone alone. The axial CT image (Fig. 49B) through the lesion demonstrates the cortical and medullary involvement of the dominant lesion, as well as the internal trabeculation. The sagittal T1-weighted image (Fig. 49C) shows the multifocal nature of this lesion, with the superior focus of involvement isolated to the cortex. The lesion is predominantly high signal on the T2-weighted image (Fig. 49D), with low signal intensity septations internally. Note the rim of high signal periosteal reaction surrounding the tibial cortex.