A 25-year-old woman presented with a chief complaint of knee pain. 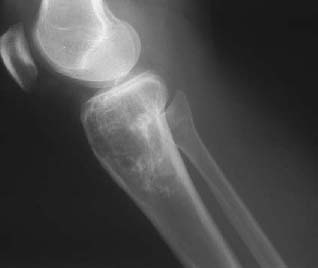 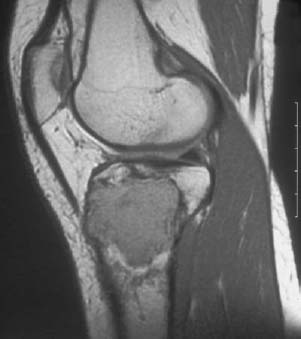 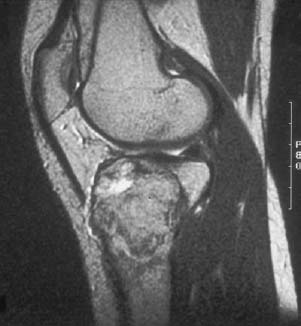 The lateral radiograph of the knee (Fig. 57A) shows a lytic lesion in the proximal tibia. The center of the lesion appears to be in the proximal metaphysis of the tibia; however, the lesion extends to the subchondral bone plate. The lesion demonstrates a narrow zone of transition, with adjacent patchy sclerosis in the surrounding bone. No mineralized matrix is identified in the lesion. The lesion is mildly heterogeneous on the sagittal T1-weighted image (Fig. 57B), with intensity slightly greater than that of skeletal muscle. On the sagittal T2-weighted image (Fig. 57C), the lesion remains predominantly intermediate in signal intensity. There is focal high signal intensity in the lesion that likely represents an area of cyst formation. Note the low signal intensity rim visible around portions of the lesion on both the T1- and T2-weighted images, representing a fibrous pseudocapsule.