Axial T2WI image at the level of corona radiata and centrum semiovale.


Axial FLAIR image at the level of corona radiata and centrum semiovale. 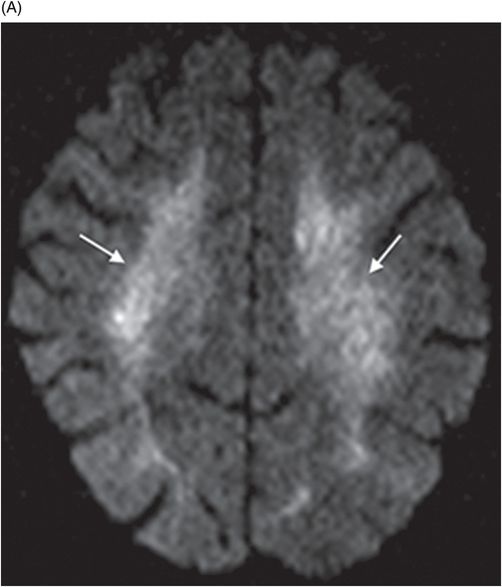 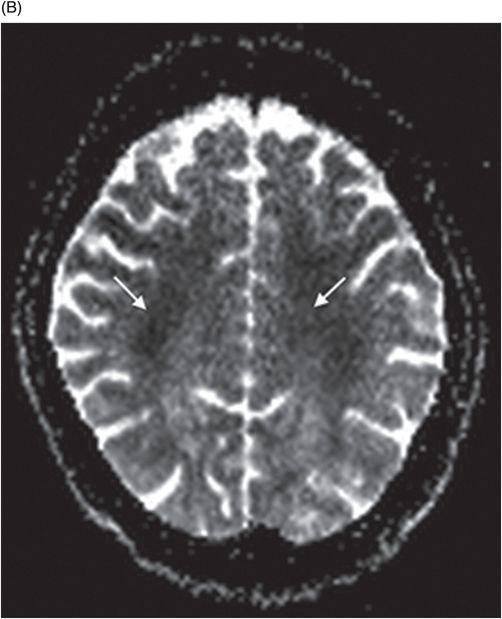 
Axial DWI image and corresponding ADC map at the level of centrum semiovale. 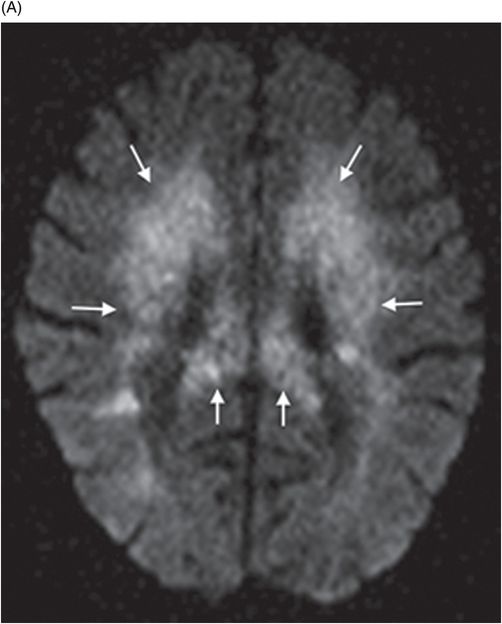 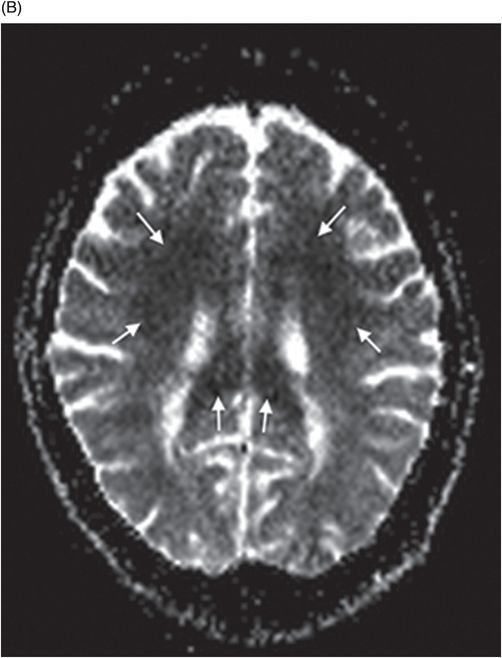 Toxic leukoencephalopathies due to solvent abuse

The differential diagnosis list for the patient images showing diffuse white matter signal changes and diffusion restriction is often wide. In a patient with history of exposure to toxic fumes, no initial loss of consciousness, and negative toxicology workup, one should consider the possibility of delayed encephalopathy due to carbon monoxide poisoning.

Carbon monoxide (CO) is both a colorless and odorless gas and poisoning usually occurs after inhalation of exhaust from automobiles or faulty home heating mechanisms. It is one of the preferred suicidal methods because of high success rate of approximately 30%. It has been broadly classified into acute and chronic presentations. The delayed presentation may be a progression of a known acute event; however, in 10% of cases patients may not have symptomatic loss of consciousness, as seen in our case. Patients may have neuropsychiatric and Parkinsonian features accompanied by a symptom-free or lucid interval ranging from a 7–21-day delay in onset to a 40-day delay in onset. It is imperative to understand the various mechanisms underlying CO poisoning in order to correlate the imaging features of delayed encephalopathy. Carbon monoxide has 250 times more affinity than oxygen for the heme moiety and forms carboxyhemoglobin thereby reducing the oxygen-carrying capacity of the blood and triggering a cascade of events interfering with the mitochondrial respiratory chain. The pathophysiology of delayed effects is not completely understood and can be explained by multifactorial mechanisms stemming from neutrophilic aggregation and degranulation, release of myeloperoxidase and protease enzymes causing lipid peroxidation, increased oxidative stress, and apoptosis. Lipid peroxidation alters the structure of myelin basic protein (MBP), inciting a lymphocytic immune reaction causing progressive demyelination and chronic white matter inflammation. Interactions of CO with cytochrome A and A3 contribute by inducing mitochondrial metabolism inhibition.

The neuropathology of delayed CO poisoning predominantly consists of white matter changes, in contrast to deep gray nuclei involvement in acute toxicity, and has been grouped into three categories including: 1) necrotic lesions predominantly involving the centrum semiovale and commissures, 2) widespread necrosis with axonal damage in the periventricular white matter with extension across the corpus callosum and commissures, and 3) patchy, extensive demyelination of the periventricular and central deep white matter with relative preservation of the axons. Necrotic lesions are monophasic and non-relapsing variant while the third category comprising non-necrotic lesions is associated with delayed encephalopathy and referred to as biphasic myelinopathy of Grinker.

Computed tomography scans are the initial modality for evaluating patients presenting with altered mental status and may show diffuse and confluent centrum semiovale and periventricular hypodensities. In severe cases, involvement of the external and internal capsules, corpus callosum, and subcortical white matter has also been described in the literature. However, CT studies can be normal in up to 54% of acute presentation. In 20% of the cases with no findings on initial CT, patients develop delayed neuropsychiatric sequelae (DNS). On MRI, the white matter changes appear hypointense on T1WI images and hyperintense on T2WI and FLAIR images, reflecting the demyelinating process. The lesion distribution is often symmetric or can be asymmetric. On DWI, cytotoxic and vasogenic edema can be identified by correlating the ADC values. Diffusion changes develop late after initial CO exposure and persist for approximately two to three weeks. The low ADC values can be attributable to acute myelinopathy with cytotoxic edema caused by energy failure.

The imaging appearances in DNS can improve in 60–70% of cases over a period of one to two years. In 80% of the cases, marked brain atrophy changes have been documented in the first six months after exposure. Magnetic resonance spectroscopy shows elevated choline and decreased NAA peaks and increase in choline/creatine ratio in the early stages. Elevated lactate peak often serves as a marker for irreversible damage. Alterations in ADC and fractional anisotropy are also seen on diffusion tensor imaging. Administration of hyperbaric oxygen (HBO) therapy and corticosteroids can alter the morbidity in patients developing DNS. Rehabilitation with occupational, speech, and respiratory therapy is vital in improving quality of life in cases with severe DNS.