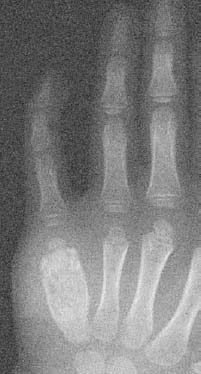 An anteroposterior radiograph of the left hand (Fig. 71A) shows obvious soft-tissue swelling centered on the fifth metatarsal which is expanded and sclerotic, with marked loss of corticomedullary differentiation. The remaining bones are normal.

In industrialized nations, a recent upswing in the numbers of patients infected with tuberculosis has occurred. Tuberculosis is still the most common opportunistic infection in patients with human immunodeficiency virus (HIV), and the elderly remain vulnerable, with patients in the United States over 65 accounting for 26% of cases despite being only 6% of the population. Globally, tuberculosis poses a significant challenge, affecting nearly one third (1.9 billion people) of the world’s population.

Tuberculous infection can affect any bone, but the most common site is the spine (50% of cases), followed by articular involvement of the hip and pelvis (12 to 15%), knee, wrist, and elbow. Historically, extra-axial osteoarticular tuberculosis was more frequently reported in the larger joints of the lower extremities, but there has been a recent trend toward a more peripheral distribution, especially in the elderly and the young.

Although Mycobacterium tuberculosis is the most common cause of mycobacterial infection, atypical acid-fast bacilli, for example, Mycobacterium avium-intracellulare and Mycobacterium fortuitum, can also affect the bone and joints.

Musculoskeletal tuberculosis generally occurs by hematogenous spread from a primary nonosseous site. Reactivation tuberculosis may be seen infrequently in the hip.

Tuberculous osteomyelitis is a disease of childhood, essentially unheard of in the adult population. In long bones, the epiphysis is the most commonly affected site, secondary to either transphyseal spread from metaphyseal involvement or adjacent tuberculous arthritis. This is in contradistinction to pyogenic osteomyelitis, where metaphyseal infection is more common and transphyseal spread is rare. The diaphysis is rarely involved in tuberculosis.

Tuberculous arthritis usually arises from adjacent osteomyelitis. The slowly progressive nature of the joint destruction is in part due to the lack of proteases in the exudate compared with pyogenic septic arthritis.

In the adult, the first site of extraspinal osseous involvement is typically a large weight-bearing joint leading to tuberculous arthritis.

Tuberculous osteomyelitis in childhood usually presents as a painless swelling of the hand or foot.

In the adult, the diagnosis of osteoarticular tuberculosis is often difficult and is delayed on average 16 to 19 months from presentation, at which time the symptoms may have been present for months or years.

Clinical findings are generally insidious, nonspecific, and slowly progressive. Patients, who are typically middle-aged or elderly, may present with chronic localized pain, boggy swelling, and weakness. They may have weight loss and fever. Muscle wasting may be obvious on examination, and there may also be associated lymphadenopathy, a draining sinus, or a cold abscess.

Ancillary tests such as the tuberculin skin test and chest x-rays may be of benefit. However, a positive tuberculin test is commonly seen in endemic areas or in those who have received the bacille Calmette-Guérin vaccine. A negative test provides more diagnostic information, but negative tests are being reported more frequently in immunosuppressed and elderly patients. A negative chest x-ray in an adult does not exclude tuberculosis, as only 50% of patients with skeletal tuberculosis have pulmonary involvement. It is thought that a negative chest x-ray in a child effectively excludes the diagnosis of concomitant musculoskeletal tuberculosis.

Definitive diagnosis requires specimen culture from aspiration or preferably biopsy of bone or synovium. In endemic areas, subacute or chronic osteomyelitis is treated as tuberculosis until proven otherwise.