This chapter summarizes the current thoughts regarding the origin and development of cancer. The chapter begins with a brief review of normal cells including insight into balance between growth and antigrowth signals controlling normal cell reproduction. This is followed by a discussion of cancer characteristics, the major differences between normal and cancer cells, and the importance of genetic instability in cancer promotion. Then four hypotheses concerning the steps involved in changing a normal cell into a cancer cell are discussed. Finally, the predictions from the different hypotheses regarding prevention and treatment of cancer are presented.

Before studying the progression toward a full-blown cancer, it is helpful to review the process of normal cell life, error repair, and death.

All cells in the body are closely regulated and must not stray from their form, function, and purpose. As an example, consider cells in the liver. There are many different kinds of cells in the liver, some providing structural support, some producing enzymes and substances to break down digested food, and others to process waste produced during these activities. Regardless of their function, they are all liver cells and are in communication with other liver cells. This communication is either by direct contact or by messenger signals. The balance between growth and antigrowth signals is constantly being altered as circumstances change. If a liver cell is damaged, a signal sends the cell into apoptosis. Growth signals are also sent to a neighboring cell to start the cell cycle for production of a replacement cell. During production of the replacement cell, there are checkpoints to ensure that the replication process is proceeding correctly. At the end of the replacement cycle, antigrowth signals stop the cell cycle, proliferation stops, and the liver continues its function of producing proteins and hormones until another replacement cell is needed. This balance between growth and antigrowth signals maintains homeostasis.

Genetic stability is the term describing the resistance to change of the genome within the DNA molecule. It represents the absence of errors during cell replication. A high degree of genetic stability means the cell’s DNA is passed error free from generation to generation. It is a measure of how well the genome resists change over time.

Genetic stability is important not only to preserve the integrity of the species, but also to maintain the function of the tissues and organs in the body. Genome stability of germ cells protects the species. Genetic stability in the somatic cells maintains the function of all body cells. All cells work for the common good of the whole body. That is, structural stroma cells must continue their function of tissue support, and saliva cells, for example, produce saliva.

Genetic stability is not absolute; some mutations do occur. These mutations increase the diversity of the species and sometimes give a survival advantage. Examples are opposable thumbs and larger brains, which increased survival. Other mutations, including red hair or dimples, are not harmful but have no apparent survival advantage. Most mutations are either repaired or do not survive.

Necrosis can be considered a “death by trauma” or accidental death caused by injury. Burns, bruises, and cuts are all causes of necrotic death. Necrotic death is characterized by swelling of the cell, membrane rupture, and the uncontrolled release of the cell’s contents. This results in inflammation and swelling of neighboring cells and tissues.

Normal Tissues Have Their Own Blood Supply

The body provides each tissue with its own blood supply to provide food and oxygen for metabolism and to carry away the waste products generated during life.

Normal Cells Are Limited to about 60 Reproductive Cycles

During each reproduction cycle, a cell’s DNA loses a small portion of the telomere at the end of the DNA and becomes a bit shorter. This is sometimes called the cell cycle clock.

Telomeres are groups of noncoded ATGC molecules and proteins at the ends of chromosomes. The adenine, thymine, guanine, and cytosine molecules are not in the form of the DNA molecule. They act as counting mechanisms that limit the number of reproductions of a cell, to about 50–70 reproductions. Toward the end of each reproductive cycle, a small section of the telomere is removed. The purpose of the telomere is to mark the end of the DNA molecule. Otherwise, the end of the DNA molecule could stick to another DNA molecule leading to mutations. Alternatively, the DNA repair mechanism could interpret the ends as a double-strand break, which must be repaired or eliminated. Telomeres lose between 50 and 500 base pairs in each replication and eventually are so short the cell’s reproduction ceases, leading to senescence or apoptosis. Senescence is a condition where the cell can continue to function, making proteins, hormones, and other products, but does not reproduce. Senescence eventually leads to cell death. The loss of telomeres is part of the natural aging process.

Telomerase counteracts the loss of telomeres during cellular replication. Telomerase is a protein enzyme that adds a DNA sequence to the end of the DNA strand during replication effectively canceling the loss of telomeres. Cells in fetal tissue, very young children, and adult germ cells contain telomerase, so their cells, in effect, do not age. Telomerase is almost undetectable in adult somatic cells, so they undergo aging.

Another trait common to normal cells is the ability to maintain their differentiation. That is, cells always retain their specialty categories whether they are designed for structural support, filtration, protein production, or whatever. This is the way tissues and organs normally function.

Cancer Cells and Their Characteristics

Cancer is a collection of diseases characterized by cells with uncontrolled growth and the ability to spread throughout the body. The name “cancer” comes from ancient physicians who noted that cancers removed from the body had crab-like extensions from the main body of the cancer. Figure 8.2 shows an example of a cancer cell.

Figure 8.2 Example of extensions from a breast cancer. From a scanning electron microscope image from the National Cancer Institute. 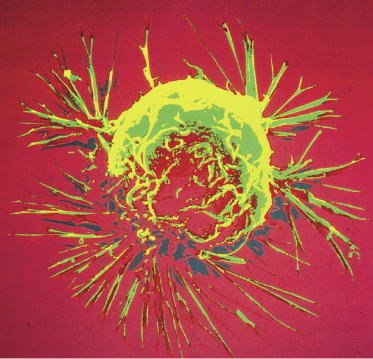 Normal cell growth is strictly regulated and controlled. In cancer cells, this control is lost. The cause of cancer is believed to be a series of mutations in cellular DNA. There is strong evidence that each cell in the human body experiences more than 100,000 DNA breaks every day. The vast majority are correctly repaired or sent to apoptosis. Only a tiny fraction of these DNA lesions are repaired incorrectly and survive. Only a small fraction of the surviving lesions are in genes related to cellular repair. Mutations in the cell repair mechanisms are unusually devastating because the repair mechanism is designed to stop mutations.

Damage to the DNA is extremely common and the repair mechanisms are very effective in correcting mistakes in DNA replication. However, given the high frequency of lesions per day in each cell, mistakes in repair are inevitable. Some mutated cells may be able to bypass the cell cycle checkpoints and survive. Most survivors die within a few reproductive cycles but Darwin’s law comes into play and a few of these survive.

Cancer cells result from a failure of the delicate balance system between growth and antigrowth signals. Almost all cancer cells have at least nine major differences from normal cells. The major difference between benign and cancerous tumors is that cancers spread throughout the body.

The Characteristics of Cancer Cells

Genetic instability is a defining characteristic of cancers. There are two types of genetic instability: microsatellite instability (MIN) and chromosomal instability (CIN). MIN arises from individual mutations of the DNA chain and leads to elevated mutation rates. CIN refers to increased rates of losing or gaining whole chromosomes or parts of chromosomes during cell division. The term “mutation” includes insertion, deletions, duplications, and other “mistakes” in the genome.