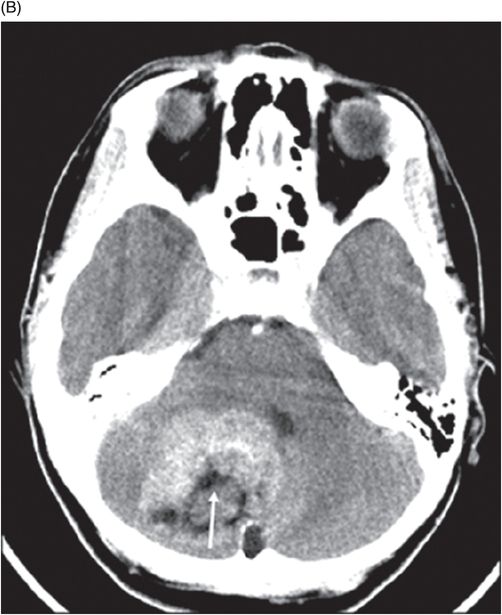 
Axial T2WI through the posterior fossa at the level of pons and cerebellar hemispheres.


Axial postcontrast fat-saturated T1WI through the posterior fossa at the level of pons and cerebellar hemispheres.

Computed tomography and MR imaging showed a heterogeneously enhancing cerebellar lesion featuring fatty streaks. These imaging features and the lack of perilesional edema in an adult patient combined with typical cerebellar symptoms are the key features suggesting a cerebellar liponeurocytoma.

The two main differential diagnoses one has to consider are adult medulloblastoma and ependymoma. Medulloblastoma appears hyperdense on CT, has relatively low T2 signal, demonstrates peritumoral edema, and often shows homogeneous enhancement and diffusion restriction; however, lipid components are noticeably absent. Ependymomas tend to be intraventricular and have low signal on T1-weighted and high signal on T2-weighted images with calcification and hemorrhage. The presence of lipidized cells seen in other neuroectodermal tumors such as cerebellar lipoastrocytoma, pleomorphic xanthoastrocytoma, supratentorial PNET (primitive neuroectodermal tumor), glioblastoma, and low-grade spinal cord astrocytoma can mimic liponeurocytoma. However, the lipidized cells are more commonly seen in the pediatric population. Depending on the primary source of origin, metastatic lesions have a varied appearance on CT and MR imaging and demonstrate vasogenic edema, while lipid component is absent.

In 2000, the WHO classified cerebellar liponeurocytoma as a distinct entity. They are well-differentiated tumors of neuroectodermal origin, and classified as WHO grade I–II neoplasms, with a low to moderate mitotic activity. These tumors have glio-neuronal components with interspersed lipidized cells that resemble mature adipocytes. In the past, cerebellar liponeurocytoma has been referred to as lipidized medulloblastoma, lipomatous medulloblastoma, lipomatous glioneurocytoma, and medullocytoma.

Cerebellar liponeurocytomas are rare, slow-growing parenchymal neoplasms of adults, with distinctive morphology, typically occurring in the cerebellum. Liponeurocytomas are also known to occur in extracerebellar supratentorial locations and are usually restricted to the lateral ventricles. They often occur between the third and sixth decades of life (mean age 50 years) without gender predilection. However, some instances in the literature suggest a female preponderance. Patients often present with headaches or more focal cerebellar symptoms, depending on the location of tumor.

On CT imaging, cerebellar liponeurocytoma has a predominant hypodense appearance, with scattered areas of even lower attenuation representing fat density with heterogeneous postcontrast enhancement. On MR imaging, lesions are iso- to hypointense on T1WI and mildly hyperintense to cortex on T2WI and very often lack vasogenic edema. Scattered streaks or laminated foci of hyperintensity on T1- and T2-weighted sequences correspond to fat density, as seen on CT. The tumors enhance inhomogeneously and the lipomatous component is suppressed on postgadolinium fat-saturated sequence and is a good diagnostic clue to confirm the adipose tissue.

Surgical resection and biopsy is recommended to establish a definitive diagnosis. Once resected, two-thirds recur within 1 to 12 years and the average 5-year survival is approximately 48%. A low proliferative index carries better prognosis. Adjuvant radiotherapy may be necessary in tumors with a higher proliferative index.