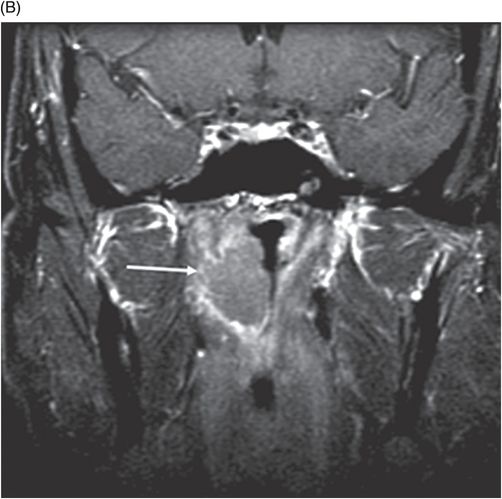 
(A) Axial T2WI and (B) Axial FLAIR of the brain at the level of temporal lobes ( six years post-radiotherapy follow-up scan). 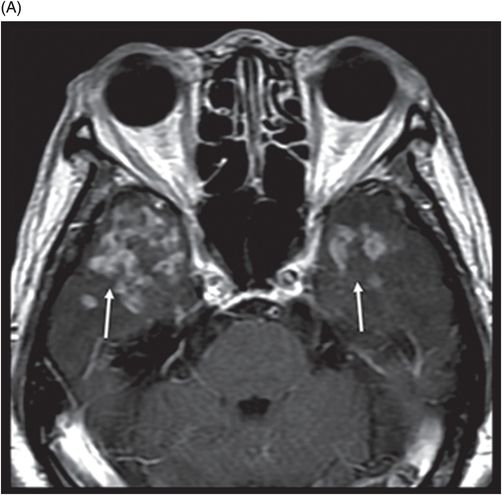 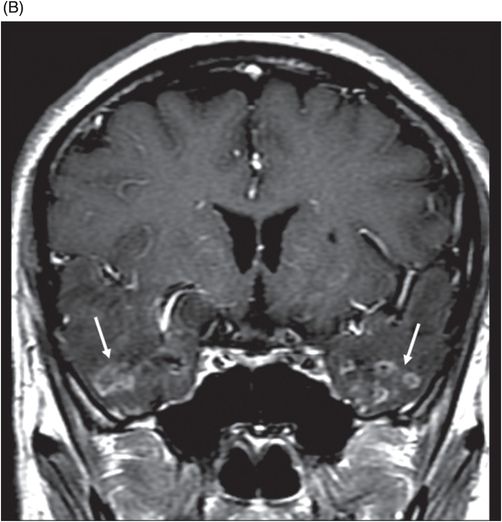 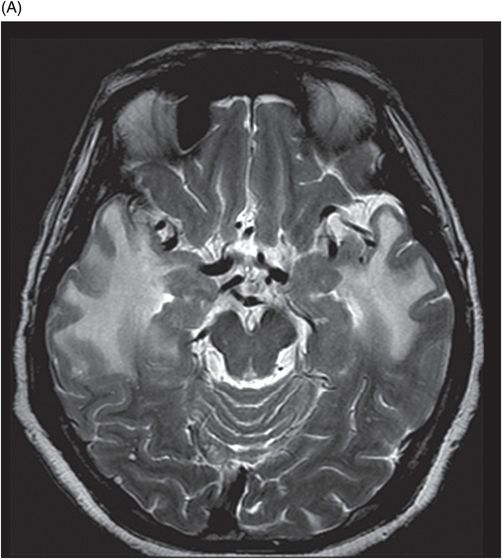 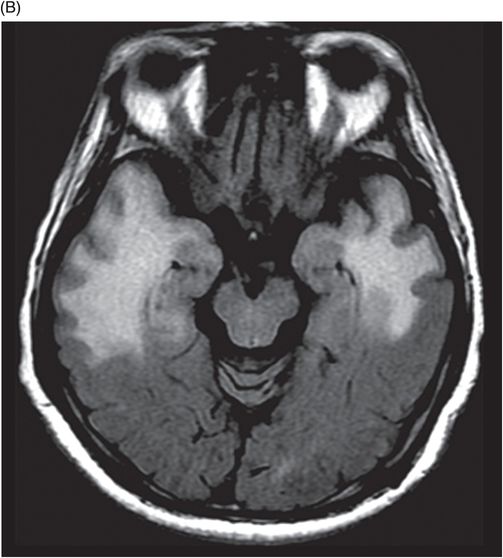 Gradually progressive cognitive decline in a patient with past history of radiotherapy for treated nasopharyngeal cancer and focal changes on MR imaging are the clues that suggest the diagnosis of postradiation temporal lobe necrosis. The anterior temporal lobes are invariably involved in the radiation port resulting in these changes.

The main differential diagnosis is local tumor recurrence, which typically has an extracranial component with leptomeningeal/dural involvement. Alternate differential diagnoses include parenchymal brain metastasis which, as opposed to radiation-induced necrosis, are often multiple and may be cystic or solid with disproportionate vasogenic edema. These entities are not confined to the radiation field and are not commonly seen in head and neck cancers. Glioblastoma may be induced by radiation, but this most often extends beyond the radiation field and lacks the bilateral presentation often seen in radiation necrosis. If present, the Swiss cheese enhancement pattern further helps in differentiating radiation necrosis from metastatic disease or a glial neoplasm. Based on T2-weighted and FLAIR images; herpes encephalitis can have similar appearance. The relevant history, lack of acute clinical presentation, and negative CSF analysis excludes the diagnosis.

Nasopharyngeal cancer causes 50,000 deaths a year worldwide with an incidence of 80,000 new cases reported annually. It shows marked geographic and racial variability, with increased prevalence in Southern China, where the annual incidence is estimated to be as high as 21 cases per 100,000 residents versus 0.2 to 0.4 in the United States and White population. Currently, radiotherapy is the mainstay of treatment and the anterior temporal lobes are invariably included in the radiation port. Radiotherapy for head and neck cancer is known to cause neurotoxicity with neurologic complications, especially in nasopharyngeal cancers. Radiation destroys the endothelial lining of small blood vessels, resulting in obliterative arteriopathy and leading to ischemic injury and necrosis of the brain parenchyma that predominantly involves the white matter.

Four main clinical presentations secondary to radiotherapy for nasopharyngeal cancer have been described 1) temporal lobe epilepsy in 31%, 2) vague symptoms such as dizziness or impaired memory in 39%, 3) non-specific symptoms such as mild headache or symptoms of increased intracranial pressure in 14%, and 4) the remaining had no signs or symptoms. Dementia, as the sole presenting symptom of temporal lobe necrosis, is rare.

On CT, the most common findings are ill-defined, focal, or confluent areas of contrast enhancement and cerebral edema predominantly conforming to the radiation field. The majority of patients with radiation-induced temporal lobe necrosis have bilateral involvement. To begin with, the imaging abnormalities can be unilateral but eventually develop bilateral changes. Edema and mass effect can be marked, resulting in brain herniation.

Treatment options for postradiation necrosis are limited as although steroids are helpful in the early stages to control edema and mass effect, their long-term use is associated with several complications and is not beneficial. Anticoagulants and antiplatelet medications used to prevent endothelial damage and thrombosis have met with little success in treating postradiation necrosis. These medications have a limited role and carry the potential risk of hemorrhage. Bevacizumab, a monoclonal antibody, which acts against VEGF (vascular endothelial growth factor) helps in normalization of the blood-brain barrier and has been shown to improve neurocognitive symptoms. Large-scale studies are required to prove its efficacy in patients with temporal lobe necrosis.