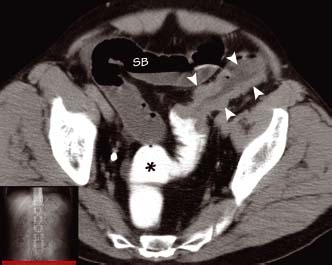 A segment of bowel wall shows circumferential irregular thickening (arrowheads). Rectal contrast material (*) introduced via a rectal catheter could not pass beyond the lesion which has obstructed the bowel. Proximal to the lesion there is dilatation of both large and small bowel (SB)
36.2 Perforation (lung windows) 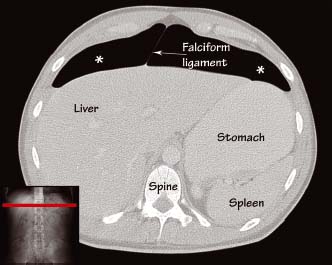 Lung window settings are highly sensitive for the presence of free intra-abdominal gas. This patient suffered an injury to the bowel from a high-speed road accident. Air (*) is seen either side of the falciform ligament separating the liver from the anterior abdominal wall
36.3 Liver metastases (portal phase intravenous enhancement) 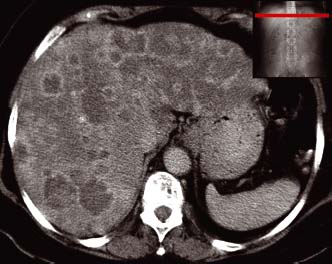 Numerous low-density irregular nodules are seen in the liver. Many of these show contrast enhancement around their rim. This patient with metastatic breast cancer had a recent ultrasound examination which had underestimated the volume of disease
36.4 Ascites 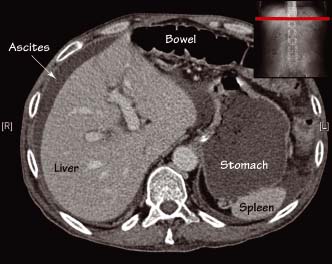 A crescent of low-density material is seen around the edge of the liver, which has a similar density to the contents of the stomach. This patient has free intra-abdominal fluid (ascites) due to peritoneal metastases from an ovarian carcinoma