Anatomy of the Neck Arteries

There are many possible anatomical configurations of the aortic arch and its branches. Description of all these variations is beyond the scope of this chapter; in particular, developmental anomalies leading to the formation of right or double aortic arches will be omitted here. The most common anatomical variants, knowledge of which is of paramount importance for performing safe catheter angiography, deserve a brief mention however.
The most frequent anatomical variants are the common origin of the brachiocephalic trunk and the left common carotid artery seen on average in 13 % of population and the origin of the left common carotid artery from the brachiocephalic trunk encountered in 9 % of patients [3, 4]. Both of these variants are more common in blacks (25 % and 10 %, respectively). Instead of arising separately, the left common carotid artery shares the aortic arch origin with the brachiocephalic trunk (Fig. 1b) or arises from the brachiocephalic trunk slightly more cranially (1–2.5 cm distal to its ostium) (Fig. 1c). As a result, only two major vessels ascend from the aortic arch. The common trunk variant, or sometimes both of the above variants, has been referred to as “bovine” arch implying high frequency of such configuration in cattle. In fact, the aortic arch in cows more often gives rise to a single common vessel, and these branching patterns are not specific on any species. Thus, “bovine-type” aortic arch should be avoided as a misnomer and replaced with an anatomical terminology [3, 4].
The arch origin of the left vertebral artery as a fourth separate arch vessel is seen in 0.5 % of patients; in such cases the left vertebral artery most commonly arises between the left common carotid and the left subclavian artery (Fig. 1d) and sometimes distal to the left subclavian artery. Rare variants include the bi–innominate artery (symmetrical right and left innominate arteries each bifurcating into the common carotid and subclavian vessels, Fig. 1e) and bicarotid trunk (bifurcating into the right and left common carotid vessels, with separate origins of subclavian arteries, Fig. 1f). Different combinations in which the neck vessels arise separately from the aortic arch are also encountered, in extreme case giving rise to six aortic arch branches (separate right and left subclavian, common carotid, and vertebral arteries, Fig. 1g) [1, 2].
The most frequent anomaly of the aortic arch seen in 0.4–2 % of population is the aberrant right subclavian artery (Fig. 1h) arising distal to the left subclavian artery and passing to the right side of the mediastinum behind the esophagus causing its typical posterior indentation and dysphagia lusoria [2].

The right and left common carotid arteries (CCA) course superiorly on both sides of the neck lying within the respective carotid space, anteromedial to the internal jugular veins and accompanied by the vagus nerve. The common carotid artery typically divides at the level of C3 or C4 vertebral body into the external carotid artery (ECA) and the internal carotid artery (ICA); this corresponds approximately to the superior border of the thyroid cartilage. Bifurcation can occur as low as T2 and as high as C2. Normally CCA does not have any named cervical branches, but occasionally the vertebral artery or proximal ECA branches can arise from it (Fig. 2) [1]. 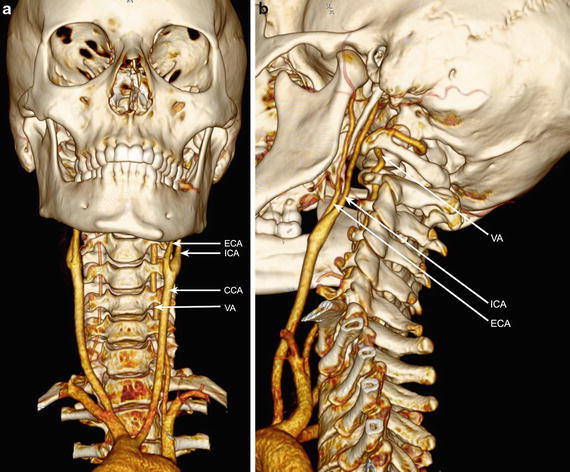 The cervical segment of the ICA (C1) extends from the carotid bifurcation to the skull base where the artery enters the carotid canal transitioning into the petrous (C2) segment. At the bifurcation, the ICA most frequently arises posterolaterally to ECA; its medial origin from CCA is seen in 10–15 % of the population. The most proximal part of the ICA shows a focal dilatation termed the carotid bulb or carotid sinus. Reversal of flow and turbulent flow pattern in this region predispose it to atherosclerotic plaque formation. Ascending cranially, the ICA passes medial to the ECA and lies medial to the internal jugular vein and anterior to the transverse processes of the upper cervical vertebrae. Usually there are no major named branches of the C1 segment of the ICA. Important exceptions include remnants of the carotid-basilar system anastomoses such as persistent hypoglossal artery (arising from the cervical ICA between C1 and C3 and passing through the hypoglossal canal to join the basilar artery) and persistent proatlantal artery type I (proatlantal intersegmental artery, joining the vertebrobasilar system after passing through the foramen magnum) [1].

The ECA is the second branch of the CCA, which unlike the ICA has multiple branches in the neck and supplies most of the neck structures. The ECA extends from the carotid bifurcation, usually at the level of the upper border of the thyroid cartilage, and curves anteriorly before inclining backward behind the neck of the mandible. The ECA is anteromedial to the ICA [1]. It gives six main branches in the neck and, after entering the parotid gland, divides into its two terminal branches. In comparison to ICA, it has smaller caliber and rapidly tapers along its course as it gives multiple branches.
The following structures cross the ECA anteriorly: the hypoglossal nerve (CN XII), posterior belly of digastric muscle, stylohyoid muscle and ligament, and facial nerve (CN VII) within the parotid gland, while the pharyngeal wall, superior laryngeal branch of the vagus nerve (CN X), and deep lobe of the parotid gland are posterior to ECA. The pharyngeal branch of the vagus nerve (CN X) and glossopharyngeal nerve (CN IX) are between the ECA and ICA [5].