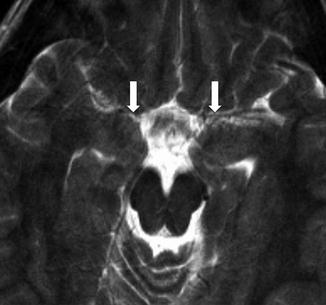 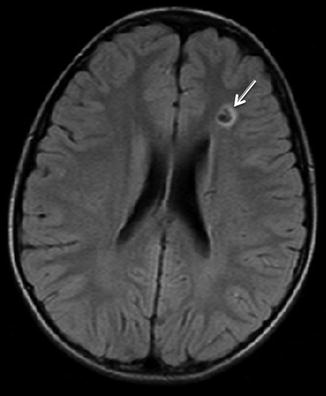 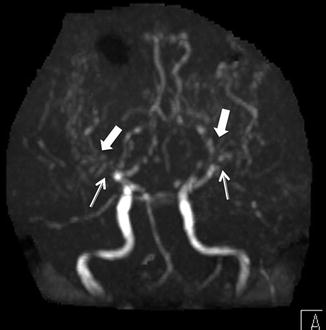 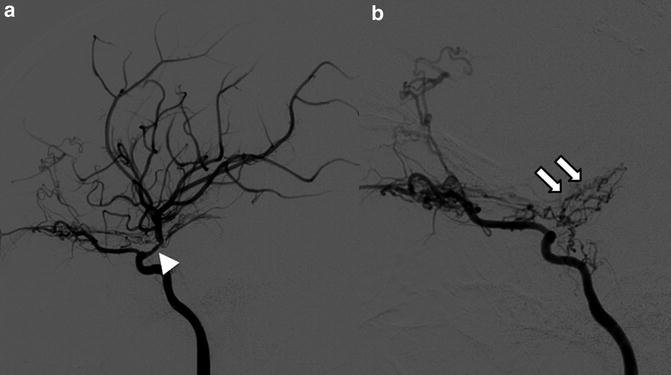 Eleven year old with new stroke found to have moyamoya. (a). At initial diagnosis, right ICA injection (lateral) projection, showing narrowing of MCA (arrowhead). (b). Follow-up 2 years later demonstrates complete occlusion of MCA with formation of basilar collaterals, aka “moyamoya vessels” (arrows)
TREATMENT: The treatment for moyamoya is a revascularization procedure. Many centers are utilizing indirect or direct techniques to create collaterals or reestablish arterial blood supply to the cerebral areas at risk for infarct. A current common technique is an indirect revascularization, encephalo-duro-arterio-synangiosis (EDAS), which can be combined with other techniques such as pial synangiosis, dural inversion, or split dural techniques in order to optimize collateral formation (Fig. 6). Some centers may include perfusion imaging techniques to determine presurgical and postsurgical appearances. 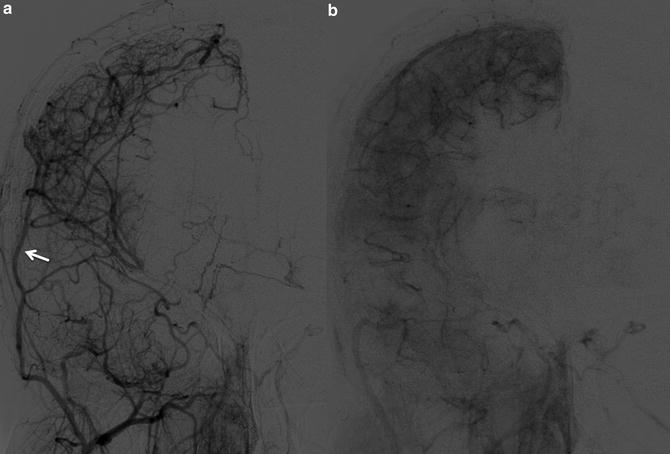 The presence of an infantile hemangioma in the head and neck region, particularly if in a segmental distribution, should raise the clinical concern for associated intracranial and vascular abnormalities. The acronym PHACE (or PHACES) represents the spectrum of findings in this rare neurocutaneous condition.

PHACE association is listed in Online Mendelian Inheritance in Man (OMIM 606519) and may be termed PHACES when referring to the association with the involvement of Sternal cleft or supraumbilical raphe abnormalities.
Patients with hemangiomas of the head or neck often undergo evaluation for PHACE syndrome with imaging examinations. It is important to understand the diagnostic imaging criteria for making the clinical diagnosis. MRI of the brain with and without contrast to evaluate for structural abnormalities as well as optimized MRA of the aorta, neck and head with and without contrast are important for accurate determination of arterial abnormalities commonly seen in PHACE patients. 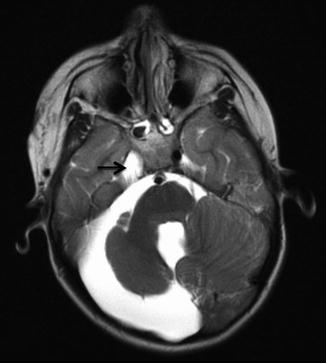 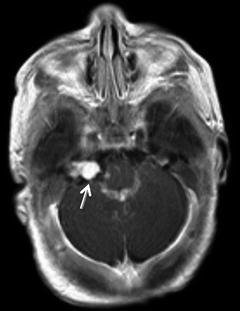 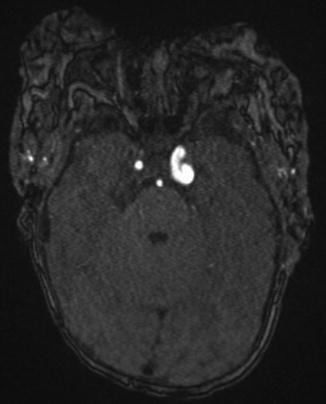 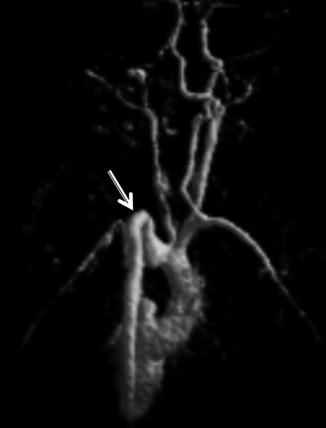 3D MRA reconstruction (posterior view) demonstrating aortic dysplasia, kinking, and coarctation in an infant with PHACES
TREATMENT: Multiple therapeutic options can be utilized for the management of infantile hemangiomas, including steroids, surgical resection, laser treatments, and most recently the use of beta blockers, in particular propranolol. Hemangioma therapy may be related to size and location of the mass. Additional treatments are related to the individual patient’s manifestations of PHACE syndrome, particularly cardiovascular abnormalities. While the cerebrovascular abnormalities are well-defined in the literature, the long-term course and necessity for treatment and management of intracranial arteriopathies are being evaluated and are typically assessed by individual case review. Recommendations for routine follow-up imaging relate to severity of arteriopathy and concern for progression of disease and potential need for treatment.

In reference to the terminology of vascular malformations, reference to ISSVA classification is recommended. In general, arteriovenous malformations are considered congenital disorders, with underlying etiology of the malformation due to abnormal developmental communications of arteries and veins. Classification and discussion of AVMs and AVFs are covered more extensively in Chapter “Brain Arteriovenous Malformations”.
Many children may have CNS abnormalities in association with their syndrome/disease or as reportable variant anomalies. The syndromes below are highlighted because of their primary neurovascular manifestation. 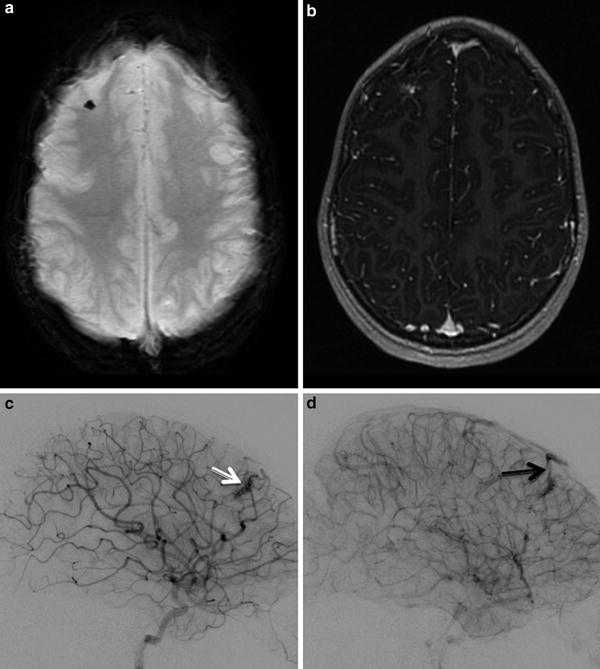 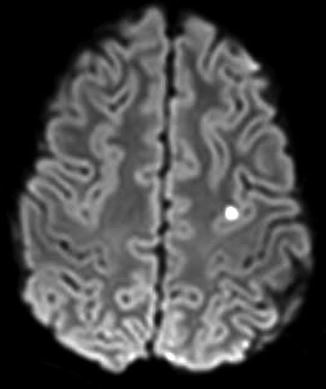 DWI shows a punctate embolic stroke in a teenager with HHT
Gene mutations have been identified, allowing subclassification of HHT. The most frequent mutation is HHT type 1 (HHT1) caused by mutation in ENG gene (chromosome 9q34). HHT2 has been mapped to ALK1 gene (12q), HHT3 (5q31), AND HHT4 (7p14), and juvenile polyposis/HHT syndrome has been linked to mutation in SMAD4 gene (18q21).
HHT patients often present in childhood, with clinically significant epistaxis (most common), evaluation of mucosal or skin telangiectasias, GI bleeding, or visceral angiodysplasias (Fig. 14). Screening for cerebral AVMs is often performed in patients with genetic or clinical diagnosis of HHT. Neurologic symptoms are occasionally the presentation of HHT, typically from embolic strokes or abscesses from pulmonary AVMs, which are a more typical manifestation. Cerebral AVMs are less common, but are more typical in ENG mutations than other known mutations. 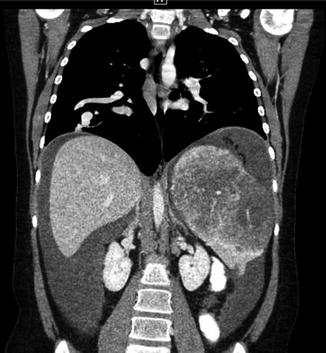 Same patient as Fig. 13. Teenager with HHT. Coronal CT image demonstrates right-sided pulmonary AVM and angiodysplasia within the spleen. Hemorrhagic fluid is seen in the abdomen
Imaging for HHT patients typically includes workup and screening with MRI and MRA. Addition of susceptibility weighted imaging (SWI) or gradient echo sequences will maximize sensitivity to blood products. CTA is a useful tool, however, in the era of limiting pediatric exposure to ionizing radiation (As Low As Reasonably Achievable- ALARA principle), the use of MRA has increased. There are occasions when small AVMs are not well seen on MRA and may only be seen on digital subtraction angiography (Fig. 15), which is still considered the gold standard for diagnosis and also allows potential for treatment. 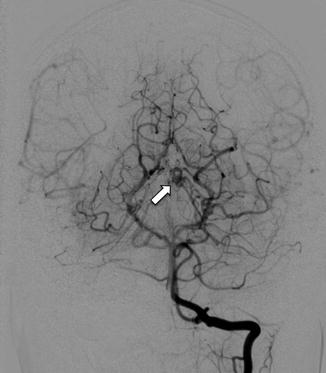 Left vertebral injection in a teenage HHT patient showing a left thalamic AVM supplied by a PCA branch (arrow). This was not identified on conventional MRI/MRA

Wyburn-Mason syndrome (also known as Bonnet-Dechaume-Blanc syndrome or retinoencephalofacial angiomatosis) is classically described as the presence of an AVM of the visual pathway (typically retinal or orbital AVM), ipsilateral midbrain AVM and often an ipsilateral facial angioma. Wyburn-Mason studied patients with retinal AVMs and found a strong association with concomitant intracranial AVMs. The current classification does not necessitate all three findings of the classical description. The embryology is thought to relate to a fetal abnormality of the primitive mesoderm before 7 weeks gestational age causing persistence of early fetal vascular tissues shared by the developing optic cup and anterior neural tube. Abnormal vascular development leads to anomalous communications between arteries and veins, thus AVM formation. While midbrain AVMs are classically described, hypothalamic/thalamic and basal ganglia AVMs are also common. The ipsilateral facial angioma is only seen in 30–50 % of patients classified with Wyburn-Mason.
Only gold members can continue reading. Log In or Register to continue