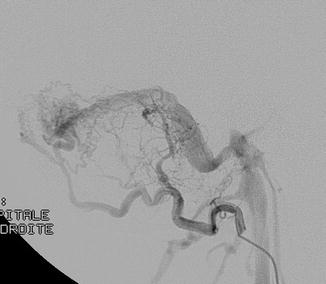 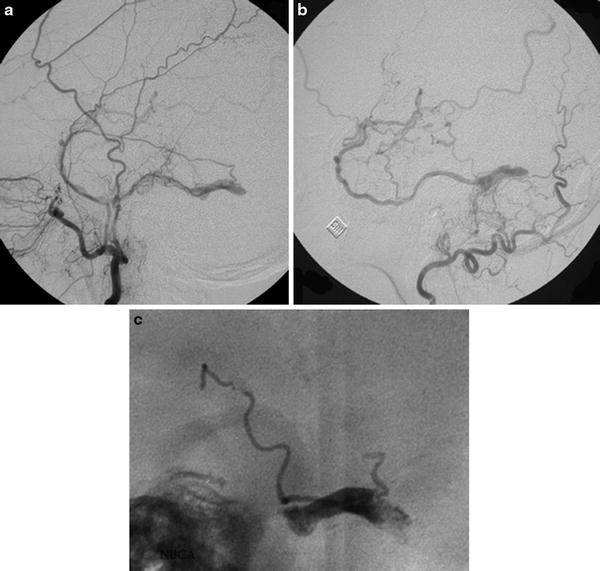 Cerebral angiogram, lateral view, selective catheterism of the maxillary (a) and occipital artery (b). Intracranial dural arteriovenous shunt of a thrombosed lateral sinus with reflux into the vein of Labbé. Posttreatment lateral view of the cast of glue into the lateral sinus (“sinus suspendu”) 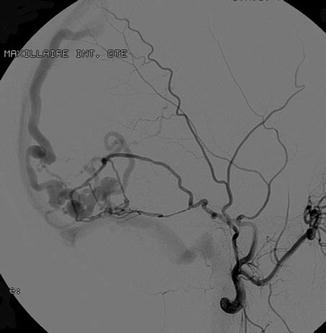 Cerebral angiography, lateral view. Selective catheterism of the middle meningeal artery. Intracranial dural arteriovenous shunt of the dural wall of the lateral sinus with direct fistula into a temporal vein with secondary opacification of the superior longitudinal sinus and lateral sinus

Recently Lasjaunias et al. proposed a revised classification of cranial and spinal dural shunts based on embryologic and anatomical specificities [12]. This classification considers epidural compartments in three groups: the ventral epidural, the dorsal epidural, and lateral epidural group. Three observations of the venous development of the brain and spinal cord and adjacent bony structures contributed to the generation of this classification.
The venous system of the notochord and corresponding sclerotome extends from the basisphenoid (cavernous plexus) to the sacrum and gives rise to the ventral epidural drainage group. It collects the blood from spongious bony structures and has no primary role in the drainage of the central nervous system. It includes the basioccipital bone, the petrous pyramid, the basisphenoid with its adjacent sphenoid wings, and their related dural structures. The venous afferents of these regions are closely related to the bony structures, and they drain outside the bony limits, thus resulting in no subarachnoid (spinal or cortical) venous reflux. However, some factors may precipitate development of CVR in these regions such as thrombosis within the epidural space surrounding, remote, or distal to the shunt. This will produce reflux in the lateral epidural space as seen in rare cases of ventral epidural spinal shunts with perimedullary venous reflux. CVR can also be encountered in high-flow shunts forcing the emissary-bridging vein opening after reflux in the lateral epidural space. Ventral epidural shunts are characterized by a strong female predominance and absence of CVR unless extensive thrombosis of epidural drainage or high-flow shunts.
The dorsal epidural venous space includes the superior sagittal sinus (SSS), torcular, transverse sinus, medial occipital sinus, and posterior marginal sinus at the foramen magnum. It is poorly developed at the spinal level, and the presence of dorsally located dural sinuses intracranially is therefore the major difference between the venous systems of the brain and spine. Their formation is linked to the appearance, during evolution, of the dural falces and tentorium and associated with the development of the paleo- and neopallial structures. These sinuses result from the confluence in the epidural space of two different venous systems: the osseous system draining the cranial vault and the leptomeningeal system draining the brain. The venous pressure within the dural sinuses is usually low; thus, antegrade and craniofugal flow of the shunts is normally observed. CVR may occur after associated venous outflow restriction or with high-flow shunts; in case of variations of the venous opening into this system such as presence of an accessory epidural sinus, distal restriction of the sinus opening will rapidly produce CVR. Dorsal epidural shunts have no sex predominance, present at lower mean age, and can be multiple. Usually no leptomeningeal venous reflux is seen, and craniofugal flow is normally observed. Leptomeningeal reflux may occur following associated venous outflow restriction or with high-flow shunts. Variations of the venous opening into this system or distal restriction of the sinus opening will also be responsible for cortical venous reflux.
The veins draining the central nervous system (both spinal and cranial) are not related to the peripheral nerves but use “emissary” or “bridging veins.” These latter join the lateral epidural venous spaces as connecting drainage system. The leptomeningeal venous drainage has no direct confluent communication with the ventral and dorsal epidural venous plexuses, which drain the skull and spine. While the typical lateral epidural shunts correspond to spinal dural fistulas that drain into emissary or radicular veins joining the perimedullary venous plexuses, intracranial pathological locations involve emissary-bridging veins of the brainstem and their homologs draining deep cerebral structures such as the condyloid vein at the foramen magnum, the superior petrosal vein, the basal vein, the vein of Galen, the veins of the anterior cranial fossa, and the orbit. Thus, the following DAVS locations are encountered: marginal sinus, falco-tentorial angle, petrosal and basi-tentorial areas, Breschet sinus, paracavernous and intraorbital regions, and lamina cribriformis. The drainage is always directed towards leptomeningeal veins, and this type of DAVS is therefore always considered to be aggressive. Lateral epidural shunts are characterized by a male predominance and present at later ages.
The significant difference of the patient characteristics (sex and age) between the groups of the new classification suggests the existence of fundamental differences, either biological or hormonal, within the epidural venous systems in each region and may point towards different etiologies of these three different groups of arteriovenous shunts. Furthermore, this classification allows a better understanding of various physiopathological phenomena.

Two modes of presentation can be distinguished: those due to hemorrhage and those due to venous congestion [2]. Hemorrhagic complications, i.e., parenchymal, subarachnoid, or subdural hemorrhages, present acutely in a stroke-like manner, whereas nonhemorrhagic neurological presentations have often a subacute or slowly progressive onset. Cranial nerve palsy, ocular symptoms, dementia, seizures, and encephalopathy are the usual symptoms associated to venous hypertension.
Those symptoms will vary accordingly to the localization and the type of the shunt.
Pulsatile tinnitus (PT) is due to arterialization and flow turbulences in the shunting zone and the surrounding venous structures, which can be transmitted to the petrous bone. They are presented in 60 % of patients, mainly those presenting with direct sinusal drainages. The differential diagnoses of PT are listed in Table 2 [1, 10].


Cavernous sinus ICADS typically present with ophthalmoplegia, proptosis, chemosis, retro-orbital pain, or decreased visual acuity.
During the follow-up of non-treated patients with ICADS, any modification of the noise intensity (increase, decrease, or disappearance) should be explored by a MRI/MRA and/or DSA. Indeed, changes in the architecture of the ICADS as thrombosis of the sinus may reroute the venous drainage through cortical veins and would put the patient in a risky situation because of the transformation of the lesion from a benign into an aggressive one.

Satomi et al. reported a series of 117 patients harboring benign cranial DAVFs. At the initial assessment, four patients were asymptomatic. Most patients presented with benign symptoms: chronic headache, bruit, or orbital phenomena. Observational management was instituted in 73 patients (62 %). Intolerable bruit or ophthalmological sequelae were deemed indications for palliative embolization in 43 patients and surgical treatment in one patient. A median follow-up period of 27.9 months (range 1 month – 17.5 years) was available in 112 patients (95.7 %), among whom repeated angiography was performed in 50. Overall, observational and palliative management resulted in a benign and tolerable level of disease in 110 (98.2 %) of 112 cases. In two cases managed conservatively CVR developed with spontaneous progressive thrombosis of venous outlets. The disease course of a cranial DAVF without CVD is indeed benign, obviating the need for a cure of these lesions. However, a benign DAVF carries a 2 % risk of developing CVD, mandating close clinical follow-up and renewed radiological evaluation in response to any deterioration in the patient’s condition [4].

The natural history of aggressive (Borden 2 and 3) cranial dural arteriovenous fistulas is not well described. Reported annual mortality and hemorrhage rates vary widely and range up to 20 % per year. Van Dijk et al. reported a consecutive single-center cohort of 236 cases that presented with a cranial DAVF between June 1984 and May 2001. A group of 118 cranial DAVFs was selected for the presence of CVR. All patients were offered treatment aimed at the disconnection of the CVR. Patients who declined or had partial treatment with persistence of the CVR had long-term clinical and angiographic follow-up to study the disease course of this select group. Fourteen non-treated patients (11.9 %) and six partially treated patients were assessed clinically and angiographically over time. The mean follow-up in this select group was 4.3 years (86.9 patient-years). During follow-up, seven patients suffered an intracranial hemorrhage (35 %). The incidence of nonhemorrhagic neurological deficit was 30 %. Nine patients (45 %) died: six patients expired after a hemorrhage, and three patients died of progressive neurological deterioration. Two patients demonstrated a spontaneous closure of the DAVF (10 %). Authors concluded that persistence of the CVR in dural shunts yields an annual mortality rate of 10.4 %. Excluding events at presentation, in this series the annual risk for hemorrhage or nonhemorrhagic neurological deficit during follow-up was 8.1 % and 6.9 %, respectively, resulting in an annual event rate of 15.0 % [13].
Only gold members can continue reading. Log In or Register to continue