CTA (Fig. 2) is a fast and widely available modality that can be performed quickly in the acute setting after subarachnoid hemorrhage. The sensitivity and specificity of this modality are reported as 98 % and 100 %, respectively [42]. It is possible to derive three-dimensional renderings of the aneurysm, and this is particularly useful in depicting the relationship of the aneurysm to its surrounding bony structures [38]. The use of CTA has greatly increased during the last years [43], and some authors support its role as the sole preoperative study for intracranial aneurysms [42]. Technical advances including increased field strength (from 1.5 to 3-T) and refinement of techniques such as time of flight (TOF) have improved the diagnostic value of MRA over time [44]. Although this modality is not appropriate for the acute setting, it is widely utilized in the diagnosis and characterization of unruptured aneurysms and is the method of choice in patients with absolute contraindications (pregnancy, anaphylactic reactions, etc.) to contrast administration.

The goal of surgical treatment of intracranial aneurysms is complete obliteration with minimal brain manipulation, while preserving flow in parent artery and associated perforator vessels. The success of the surgical procedure depends on a variety of factors, including appropriate anesthetic management and an organized surgical technique. All of the procedures, regardless of the location, involve certain critical steps that allow adequate exposure and obliteration of the aneurysm. Further principles have to be taken into account depending on the particular anatomic location. Once the aneurysm has been surgically treated, there are tools available in the intraoperative setting to confirm proper obliteration of the aneurysm and ensure patency of the parent artery and perforator branches.

Appropriate anesthetic management plays a very important role in the surgical treatment of intracranial aneurysms. The baseline clinical condition of the patient and the rupture status of the aneurysm often dictate the anesthetic plan. While early surgical treatment is the best measure to reduce the risk of rebleeding in patients with aneurysmal subarachnoid hemorrhage, tight control of hemodynamics and certain precautions must be implemented to minimize the risk of periprocedural rupture. The transmural pressure gradient should be minimized while an adequate cerebral perfusion pressure should be maintained. Appropriate prophylactic measures should be adopted to prevent excessive hypertension that can be present during procedures such as tracheal intubation or surgical stimuli such as skin incisions or pinning for the craniotomy. During the surgical procedure, pharmacologic measures can be established in order to increase brain relaxation, minimize brain retraction, and facilitate dissection. Osmotic diuresis with mannitol reduces the brain tissue volume, while changes in the ventilatory parameters such as controlled hyperventilation can achieve mild hypocapnia and reduced cerebral blood volume to provide additional brain relaxation. These latter maneuvers are especially important in patients with acutely ruptured aneurysms who often have a tight and edematous brain. Additional measures have to be considered when a prolonged temporary clipping is necessary, such as pharmacologic metabolic suppression. The role of moderate hypothermia to extend the duration of tolerable occlusion was felt to be protective as it theoretically reduces the release of excitotoxic amino acids. However, a randomized trial failed to show an effect of mild intraoperative hypothermia on neurologic outcome in patients with favorable clinical grade subarachnoid hemorrhage [45].

Critical steps for the surgical treatment of intracranial aneurysms

Subarachnoid dissection (Fig. 3a–c): Intracranial aneurysms are commonly located along the circle of Willis within the subarachnoid space, so the surgical treatment is entirely extraparenchymal. By opening the arachnoidal planes and respecting the pia-arachnoid covering the brain, there is no violation of the cortex. Progressive opening of the subarachnoid cisterns en route to the aneurysm allows CSF drainage, and a wide opening of the surgical corridor allows mobilization of the brain without transmitting traction or undue forces on the surrounding structures. The dissection usually follows the path of a major artery with special caution to avoid damage of small perforators.
2.

Brain retraction : Proper view of the surgical corridor occasionally requires some degree of brain retraction. However, this should be applied in a delicate fashion to avoid local ischemia or damage to neurovascular structures. The suction device can be used to apply gentle retraction as the dissection progresses as well as to provide countertraction when cutting tissue (Fig. 3a, c). If fixed retractors are necessary, these should be placed only after thorough dissection to maximize brain relaxation and minimize retraction pressure. Drainage of cerebrospinal fluid by opening the basal cisterns, fenestrating the lamina terminalis, lowering an existing external ventricular drain (EVD), or placement of a new EVD intraoperatively (in ruptured cases) are all acceptable maneuvers. In addition, osmotic diuretics, as previously described, can be given to decrease the brain tissue volume, and steroids can be administered to minimize edema from retraction.
3.

Maximizing exposure throughbone resection: Bone removal might be necessary to maximize the exposure and decrease brain manipulation, for example, the drilling of the sphenoid ridge for pterional approaches. A variety of advanced skull base approaches have been used in the treatment of intracranial aneurysms. While these are not necessary in the majority of cases, they continue to have a role in selected patients with aneurysms at challenging locations such as the mid-basilar trunk.
4.

Vascular control (Fig. 3d–f): The afferent and efferent arteries that supply anterograde or retrograde blood flow to an aneurysm should be exposed in case temporary clipping is necessary. Proximal control should be established as early as possible, and the most appropriate point is defined according to the location of the aneurysm; the most complete and preferable is that located adjacent to the aneurysm. Avoidance of the aneurysm dome while establishing proximal and distal control is critical in order to prevent intraoperative rupture. If vascular control cannot be established, a careful dissection focused on the aneurysm neck should be made, and the dome should be avoided to prevent rupture.
5.

Temporary clipping (Fig. 3d, e): Temporary clips are often placed to facilitate aneurysm manipulation and to optimize visualization of its anatomy, including small perforating arteries and efferent vessels. In the case of complex aneurysms, temporary clipping is especially helpful for softening of the neck to allow for more aggressive permanent clipping. In a minority of cases, such as thrombosed or previously coiled aneurysms, the use of both proximal and distal temporary clipping allows for complete trapping of the segment harboring the aneurysm.
6.

Permanent clipping (Fig. 3e, f): Permanent clipping is certainly the most important and critical part of the surgical treatment of intracranial aneurysms. The goal is to achieve complete occlusion of the aneurysm while preserving adequate flow through the parent vessel and small perforating branches. Therefore, complete visualization of the aneurysm and its surrounding structures is essential before proceeding with the permanent clip application (Fig. 3c). Small aneurysms with narrow necks are often treated with a single clip. However, large aneurysms with broad necks and complex anatomy often require multiple clips in order to achieve complete obliteration.
7.

Clip inspection : Once the permanent clips are in place, the aneurysm can be mobilized in order to confirm the patency of the parent artery as well as the efferent branches and perforating vessels. In addition, complete aneurysm obliteration can be confirmed with visual inspection and by palpating the aneurysm sac looking for the absence of pulsatile flow. Puncture of the dome is often done at this stage to confirm complete exclusion by the clip.

Artist depiction of the basic steps of microsurgery for intracranial aneurysms. (a) The arachnoid surrounding the aneurysm and its parent artery is widely opened. (b) The proximal portion of the feeding vessel is exposed in order to obtain proximal control. (c) The aneurysm neck is circumferentially separated from surrounding tissues and carefully inspected prior to clipping. (d) Temporary clipping can be used to “soften” the aneurysm and facilitate definitive clipping. In addition, presence of the temporary clip protects from massive bleeding in the case of intraoperative aneurysm rupture. When applying the temporary clip, the utmost care is exercised to avoid any compromise of small perforating vessels. (e) The permanent clip is applied while the temporary clip is in place; the ideal placement of the clip blades will completely cross the neck of the aneurysm while preserving patency of the parent artery. (f) The temporary clip is removed and the blades of the permanent clip are inspected to ensure that clip blades completely cross the aneurysm neck without compromising the parent artery. It is important to check for any small perforators that may have inadvertently been included inside the clip blades

Visual inspection alone is often insufficient to confirm proper clip placement. Therefore, various techniques have been developed to assess aneurysm occlusion as well as parent artery and perforating branch patency. In the intraoperative setting, these techniques can be used alone or in combination to further adjust surgical clips. Adjustments are undertaken to avoid vessel stenosis, occlusion, and subsequent cerebral ischemia or aneurysm remnant, which may predispose to aneurysm recurrence and rupture.

Intraoperative digital subtraction angiography (DSA) is considered by many as the gold standard for assessment of aneurysm occlusion and vessel patency. The rate of clip readjustment after intraoperative angiography is highly variable and ranges between 8 % and 34 %. Images in different projections can be obtained for comparison with the preoperative studies and to ensure proper clip placement. Despite its invasive nature, the complication rate is minimal in experienced hands, and many authors advocate the routine use of intraoperative angiography in all cases of aneurysm clipping. However, it is not widely available, requires the presence of trained personnel during the surgical procedure, and is time-consuming. Moreover, some small perforators are beyond its resolution and cannot be visualized. With the availability of newer techniques of intraoperative imaging to verify proper clip placement, this technique is now used in selected cases, particularly when treating large and complex aneurysms.

Micro-Doppler ultrasonography is a noninvasive method often used during intracranial aneurysm surgery for the assessment of parent vessel patency and complete aneurysm occlusion. This method is inexpensive, easily performed, does not significantly prolong the operative time, and can be used repeatedly if clip adjustments are required. Although partial aneurysm occlusion can be easily detected due to persistent flow in the aneurysmal dome, the residual neck of a partially obliterated or thrombosed aneurysm cannot be detected with this modality because of the lack of flow in the dome.

Near-infrared indocyanine green (ICG) fluorescent videoangiography is a relatively new method for intraoperative assessment of blood flow during aneurysm surgery. ICG is a near-infrared fluorescent compound that is injected intravenously and binds to plasma proteins to reach the cerebral vasculature within 30 s. A near-infrared light source and a near-infrared-sensitive video camera, which are included in most modern surgical microscopes, are necessary to visualize ICG in the vasculature. This technique allows for real-time visualization of aneurysm filling and patency of efferent vessels or perforating branches within the surgical field (Fig. 4). This method of intraoperative assessment is especially useful for evaluating patency of very small perforating branches (Fig. 4c–e), as many of these are beyond the resolution of standard DSA. Recent studies have shown similar rates of clip readjustment when comparing intraoperative ICG videoangiography to intraoperative DSA, supporting the routine use of ICG videoangiography while DSA is utilized only in selected cases. 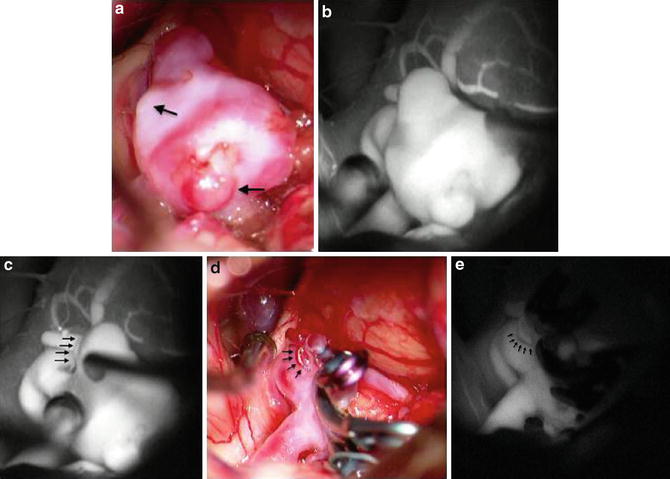