In difficult cases, most of the local therapeutic regimens could be combined for better effort and also some of them may be combined with systemic chemotherapeutic treatment or radioreceptor therapy. This multimodal treatment concept is a new approach in treatment of complex NET-metastatic disease and in some of the cases it may have a “neoadjuvant” character, when it is followed by a curative resection.

3 Anatomy of the Liver Under the Focus of Local Treatment, Mostly Embolization Procedures

The liver develops from a bud out of the most caudal part of the foregut. This hepatic diverticulum divides into two parts, the large cranial part, the primordium of the liver and the smaller caudal part which forms the gallbladder and cystic ducts, while the bigger cranial part breaks up the umbilical and vitelline veins. This portion forms the sinusoids and the portal venous system. Due to its origin, the biliary system of the liver is only nourished by the arterial system, whereas the liver parenchyma is mainly nourished by the portal venous (up to 75 %) and the arterial system. This has to be captured in mind for planning of all embolization therapies. During the developmental phase, a big number of variations of the arterial blood supply of the liver can develop. An overview according to the works of Lippert and Pabst (1985), the synopsis of uflacker (2007), the older atlas of Michels (1955), and of own observations is given in Tables 2 and 3. Mainly for the embolization therapies a detailed pretreatment workup of arterial blood supply of the liver has to be done.

Also of importance for tumor-embolization, mainly in case of semiselective procedures, done from a wedge-position is the presence of interlobar communicating arteries. These had been described first by Redman and Reuter (1970), which described them as small arterial communications present in the hilum of most cases. The authors and also other contributors found these communications in up to 85 % of the cases. A special classification was given by Tohma et al. (2005). The variation of cystic arteries (important for TACE and SIRT) is also high: in 80 % one cystic artery exists, in 20 % two, and in <1 % three cystic arteries could be found. Under the huge number of variations only the most common are: cystic artery as branch of common hepatic artery (46 %); Cystic artery as branch of accessory right hepatic artery—originating from superior mesenteric artery (12 %) and cystic artery originating from bifurcation of common hepatic artery (10 %). For more details, see Lippert and Pabst (1985).
Special remarks have to be done on the “arterial-only” blood supply of the biliary system. Contrary to the liver parenchyma the bile ducts are supplied exclusively from hepatic arterial branches, deriving directly from the major arteries that give off a peribiliary capillary plexus surrounding the bile ducts. The capillaries have diameters of 10–60 μm, corresponding to the administered DC-microbeads. This is also shown by Northover and Terblanche (1979). They demonstrated that right and left hepatic ducts are fed by a lot of small vessels which derive directly from left and right hepatic arteries—a reason why bile duct necrosis and biliary abscesses can occur, when the therapeutic position of the catheter is chosen to proximal in the main liver arteries, or overtreatment is done with complete occlusion of segmental arteries or main-stem arteries.
Every arterial embolization leads to hypoxic stress of the biliary system and every overtreatment will induce biliary driven complications like cholangitis and biliogenic abscesses.
Not only a careful pretreatment workup has to be done, but also during embolization critical care has to be taken on parasitic arterial supply of phrenic, mammarian, or gastric artery and other major or minor arteries and on arterial variations which can “open” during changing blood flow under the embolization and can lead to embolization failures.

4 Pretreatment Diagnostics: The Work up

Prior to any treatment of liver metastasis, it is useful to have information on tumor-load, liver function, liver volume, vascularization of the metastases, and the anatomic conditions (vascular anatomy with variations, relation of metastases to vessels, e.g., portal venous or central venous system, surrounding structures, and organs).
Basis for any decision should be a so-called four-phases computed-tomography with contrast media: native, arterial- (≈20 s), portal- (≈40 s), venous-phase (≈70 s)—the time schedule is recommended for a normal-weighing adult with normal cardiac function. From the arterial, portal venous and venous phase secondary reconstructions should be worked out in 2 mm slices with coronal and sagittal orientation. Not so much for interventional decisions but for instructions of younger doctors and for interdisciplinary discussions the reconstruction of MIPS as thick slices in coronal orientation could be useful. Volumetry of the liver and of the total tumor-load should be calculated out of the late venous phase, if necessary.
A “standard interventional-lab-examination” should give results for renal retention parameters, liver filtration, and—synthesis, coagulation-parameters, hemogram, c-reactive protein, and total bilirubin. MRI-examinations are also helpful, in some cases, with primovist as hepatocyte-specific contrast agent which could be helpful in the discrimination of unclear—not typical liver lesions. The CT is more preferable due to the higher resolution and better discrimination of the vascular architecture of the tumorsites and surrounding tissues. An overview of preparation to local liver treatment and possible decisions will give the schedule in Fig. 1.

5 Strategies in Treatment of Liver Metastasis

Decision for local treatment has to follow the delicate proof for curative surgery and the proof for systemic treatment in adjuvant concepts. Until now curative resection is the golden standard for the treatment of liver metastasis in NET-patients. Ideal cases are patients with a single-lobe disease or maximum of 3–5 metastases in both lobes when their central diameter is lower than 3 cm. Often a tumor debulking by surgery could be technically done, but in the most of the nonresectable cases this will be invasive for a noncurative, palliative situation (Blonski et al. 2005), and in some cases portal vein thrombosis or central vein involvement also affects the chance of resection. So only a minor number of cases will undergo surgical resection as a treatment strategy, for the most cases (more than 80 %) liver surgery is not a treatment option. Portal vein embolization presurgery will extend the volume of healthy liver tissue in the liver parts intended to preserve after resection. In the most cases, a trisectorectomy will be affordable after 4–6 weeks post-embolization. In some cases, liver transplantation was done in patients with carcinoids, suffering from severe liver metastatic disease and loss of liver function. The results had been positive, but the prognosis after transplantation changes to worse, when the patient has an age of more than 50 years or has a tumor-burden of more than 50 % in the liver or portal- or central vein infiltration is present. Transplantation also will be a very limited option despite to strict indications [according to Milan-criteria (Coppa et al. 2001)] and a shortage of donor organs. Actually liver transplantation should be done if other therapeutic options failed (Blonski et al. 2005).
In symptomatic patients somatostatin analogs like octreotide and lanreotide have been used effectively improving quality of life and control of symptoms in patients with carcinoid syndromes (Fig. 2).

Options in local treatment of symptomatic and nonsymptomatic NET-metastases in the liver. The embolizing treatments are primary options and also escape strategies after failure of other procedures. TACE transarterial chemoembolization; TAE transarterial embolization; SIRT selective intraarterial radiotherapy
At the present, there is no clear golden standard for the local management of nonresectable hepatic mNET. As a basis for understanding the combined multimodal treatment-options a short overview of local treatments is given first. Particularly during the phase of isolated involvement of the liver, locoregional therapy poses a meaningful concept for improving prognosis and quality of life. Alongside thermal procedures like cryotherapy (CRYO), radiofrequency thermal ablation (RFTA), laser-induced interstitial thermal ablation (LITT), and chemical procedures, such as ethanol injection (PEI) or acetic acid injection (PAI), transarterial chemoembolization (TACE) have taken a dominant position among local ablative procedures. Recently, it has been supplemented through a further embolization procedure, the selective internal radiation therapy (SIRT). Moreover, there is the possibility of conditioning patients for an expanded liver resection (trisectorectomy) through portal vein embolization (PVE) and achieving a curative resection. Combined treatments in the manner of some neoadjuvant treatment in the future could lead to higher rate of curations.

Among the thermal procedures, cryotherapy (CRYO) and laser-induced interstitial thermal ablation (LITT), despite good results, have only comparatively low prevalence due to the substantial effort involved or the costs connected with them. Thermal therapy is currently dominated by radiofrequency-based systems that are presently used primarily by interventional radiologists, but increasingly by surgeons, gastroenterologists, and pulmonologists, also. Here, the organ regions have also increasingly broadened: the main region of use is still the liver, but tumors/metastases in the kidneys, lungs, spine, sacrum and at other bone localizations are also successfully treated in growing numbers.
Basically, RFTA is differentiated between monopolar and bipolar systems, whereby the bipolar systems are increasingly establishing themselves in practice. On the one hand, this is a result of their simpler handling (no neutral electrodes required, no risk of skin burns). On the other hand, they give option to treat larger tumors (up to 5 cm in diameter, in single cases up to 7 cm maximum tumor-diameter) and to achieve a safe A0 ablation with a sufficiently wide, tumor-free margin (minimum 1 cm) analogous to surgical R0 resection. This option is balanced by the necessity of placing and simultaneously controlling up to six probes with assistance of MRI, CT, or ultrasound, which is sometimes difficult to do in practice. In comparison, monopolar systems offer simple and safe placement, for instance, with use of the LeVeen needle in the case of small foci; however, they only allow a sure tumor destruction up to a limit of 2, with bulky systems up to 4 cm. An example for percutaneous placement of bipolar system in the liver is given in Figs. 3 and 4. 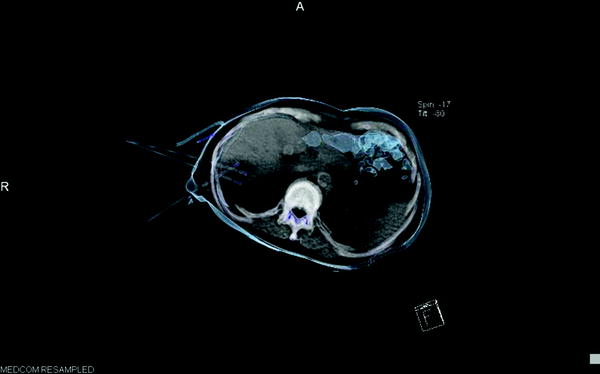 Same patient as Fig. 3: native CT-scan pre- and post-RFTA. Complete destruction of target volume, gas bubbles after administration of 110 kJ in the target volume
In both procedures, destruction of tissue is caused by warming up to temperatures between 60 and 120 °C. In the case of the bipolar Celon® system, this is achieved with the use of a high-frequency alternating electric current which leads to tissue warming through induction of frictional heat as a result of ion movement. The ability to heat up tissue is dependent of physical and physiological tissue characteristics and of RF-delivery itself. The complex relationship could be described by the bioheat equation (Pennes 1948), cited from Ganguli and Goldberg (2009):