Intravertebral vacuum cleft sign, plain radiography.
Lateral view of the thoracic spine of a 60-year-old woman shows a compressed thoracic vertebral body with gas beneath the anterior aspect of its superior endplate (arrow)

Although CT is not considered the examination of choice for the characterization of VCFs, it has been studied in this setting, and multiple valuable signs have been described. CT findings reported to be associated with a benign VCF are cortical fractures of the vertebral body without cortical bone destruction (the so-called puzzle sign, consisting of small gaps in the cortical bone with all the respective bone fragments still visible and fitting together like a puzzle), retropulsion of a bone fragment into the spinal canal, fracture lines within the cancellous bone, an intravertebral vacuum cleft sign, and a thin (<10 mm), diffuse circumferential (i.e., surrounding the entire anterolateral outer surface of the vertebral body) paraspinal soft-tissue mass [10] (Figs. 8.2 and 8.3). Regarding the intravertebral vacuum cleft sign, its detection rate is, as expected, much higher on CT than on plain radiographs [24]. As with plain radiographs, it is most commonly seen as a linear gas collection adjacent and parallel to the fractured endplate (Fig. 8.4). Occasionally the gas collection may have a transverse (left to right) linear configuration, best appreciated on coronal images (Fig. 8.5). Despite the ability of CT to demonstrate even very small collections of gas, none of the metastatic VCFs in two CT studies demonstrated the sign, thus confirming its high specificity for benignancy [10, 25]. CT findings associated with a malignant VCF are destruction of the cortical bone of the vertebral body, destruction of the cancellous bone of the vertebral body, destruction of a pedicle, a focal paraspinal soft-tissue mass, and an epidural soft-tissue mass [10] (Fig. 8.6). All the abovementioned signs are better depicted with thin-collimation MDCT which provides great anatomic detail (e.g., for the evaluation of cortical bone) and allows for the use of sagittal and coronal multiplanar reconstructions [25]. 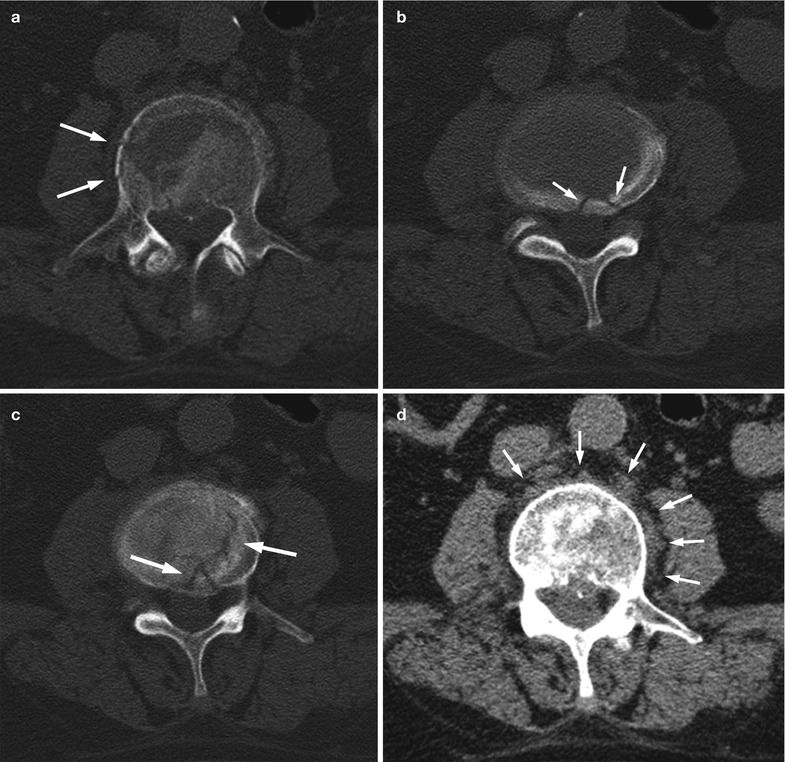 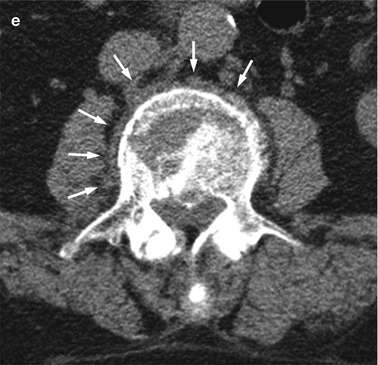 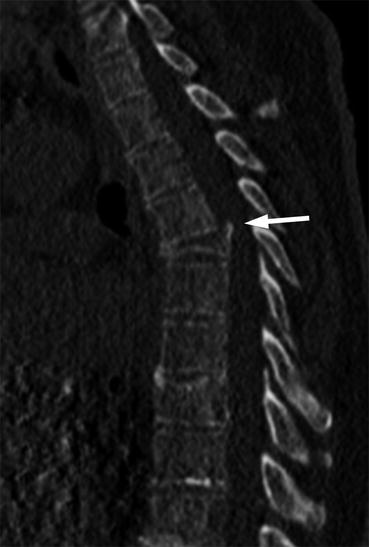 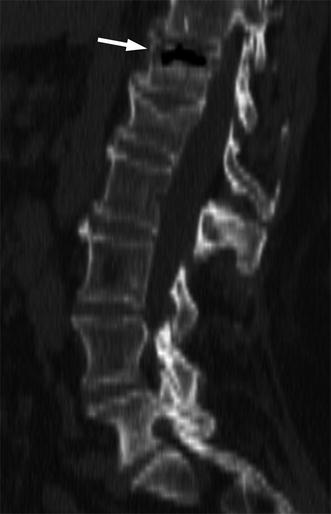 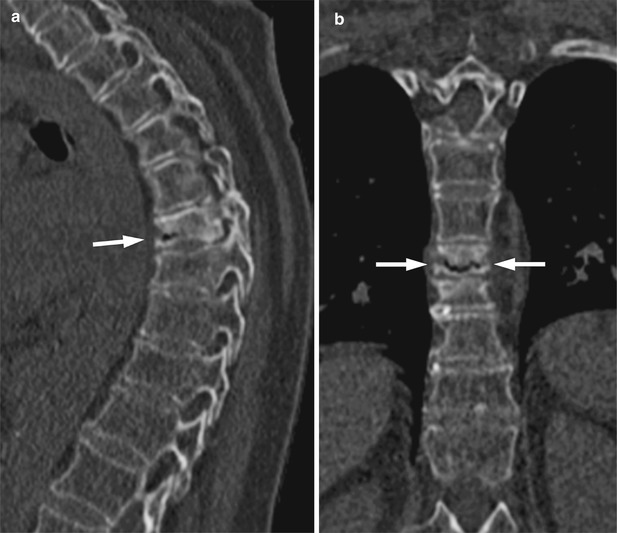 Intravertebral vacuum cleft sign, CT.
Reconstructed sagittal (a) and coronal (b) images obtained from a whole-body CT study of a 62-year-old woman with a chronic sclerotic fracture of T8 presenting with acute back pain due to further collapse demonstrate intravertebral vacuum cleft sign (arrows). The transverse left to right linear configuration of the gas collection is well shown on the coronal image 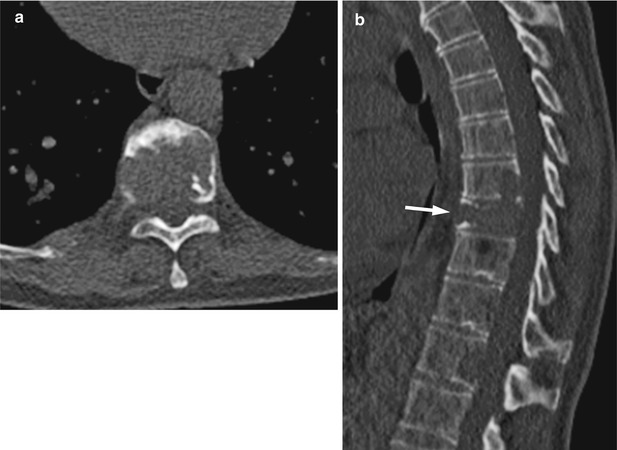 Malignant vertebral compression fracture, CT findings.
Axial (a) and reconstructed sagittal (b) CT images from a whole-body CT study of a 60-year-old man with multiple myeloma show compression fracture of T9 (arrow) with extensive destruction of cancellous and cortical bone
Bone scintigraphy is not useful in the differentiation of VCFs since both benign and malignant fractures display nonspecific increased tracer uptake. Moreover, increased tracer activity may persist in benign fractures for up to 2 years after the initial event [26].
The role of FDG-PET in the differential diagnosis of benign and malignant VCFs has not been extensively evaluated. Theoretically, malignant vertebral fractures must display increased FDG uptake due to the metabolic activity of tumor cells, whereas benign osteoporotic fractures are not expected to significantly accumulate FDG. Two retrospective studies with 33 and 96 patients concluded that there is a statistically significant difference in mean standardized uptake value (SUV) between benign and malignant vertebral compression fractures [27, 28]. In the first study, mean SUV was 1.9 ± 0.97 (range 0.7–4.9) for benign and 3.9 ± 1.52 (range 2.2–7.1) for malignant fractures. The authors reported that the accuracy of FDG-PET in differentiating benign from malignant compression fractures was 92 % [27]. In the second study, mean SUV was 2.38 ± 1.90 (range 1.9–6.0) for benign and 6.29 ± 3.50 (range 2.6–14.4) for malignant fractures. Based on these data the most reliable threshold for SUV was found to be 4.25, which yielded a sensitivity of 85 % and a specificity of 71 % [28]. Differences in the reported SUV measurements may be partly related to the time interval between the fracture event and the PET examination. For example, it has been reported that in benign traumatic or surgical fractures, FDG uptake rapidly decreases with time and normalizes within a maximum of 3 months [29]. It is obvious from the abovementioned data that overlaps exist in SUV measurements between the two groups of fractures and that additional studies are needed to validate the results and better define the role of FDG-PET as a problem-solving tool for VCF differentiation.

MRI is largely considered the imaging modality of choice to diagnose the cause of a VCF. Several articles in the peer-reviewed literature have described MRI features valuable for the differential diagnosis of a VCF. A 2012 meta-analysis identified 31 original studies published between 1989 and 2009 which reported the diagnostic performance of various MRI features in differentiating benign from malignant VCFs, using follow-up imaging and/or biopsy as a reference standard for the etiology of the VCF [2]. These features can be broadly grouped in three categories: signal intensity characteristics, morphologic characteristics, and characteristics related to quantitative data. Signal intensity distinguishing features are based on the ability of MRI to directly visualize the bone marrow and, therefore, to define patterns of marrow signal abnormality specific to each type of fracture. MRI, because of its excellent soft-tissue contrast, also allows for detailed morphologic analysis of the collapsed vertebra and its surrounding tissues. This has led to the description of a large number of useful morphologic features for VCF discrimination. Finally, quantitative MRI techniques, especially diffusion-weighted imaging and chemical-shift imaging, have been evaluated by investigators in an attempt to establish well-defined thresholds for objective VCF characterization.

Signal intensity characteristics are assessed on T1-weighted images. STIR and contrast-enhanced sequences are considered nondiscriminatory. Both acute benign and malignant vertebral fractures appear homogeneously or heterogeneously hyperintense on STIR. Most studies have found that visual assessment of contrast enhancement is not useful for fracture characterization due to significant overlaps between patterns.

Complete replacement of the normal marrow signal intensity, seen as diffusely low signal of the entire collapsed vertebral body on T1-weighted images, has been strongly associated with metastatic VCFs in numerous studies (Fig. 8.7). The reported percentage of malignant VCFs with total marrow replacement on T1-weighted imaging varies between 77 and 88 % [9, 13–15, 30]. The obvious explanation is that most, if not all, of the vertebral body marrow must be replaced by tumor for a metastatic compressive fracture to occur, thus leading to a diffusely low T1 signal with no apparent spared marrow. However, apparent complete marrow replacement does not, by itself, totally exclude the possibility of a benign fracture. Low T1 signal involving the entire vertebral body has been described in 15–21 % of benign VCFs as well [9, 13, 14]. In acute osteoporotic fractures the bone marrow edema associated with the fracture-induced reactive process may occasionally occupy the entire vertebral body, thus resulting in a pattern of diffuse low T1 signal intensity [13] (Fig. 8.8). In fact, the extent of low T1 signal in osteoporotic fractures is partly time-dependent. The closer to the onset of acute pain imaging is performed, the more likely it is that complete low T1 signal will be observed. Conversely, since in this type of fracture the low T1 signal represents reversible edema, chronic healed fractures appear uniformly hyperintense on T1-weighted imaging (Fig. 8.9). 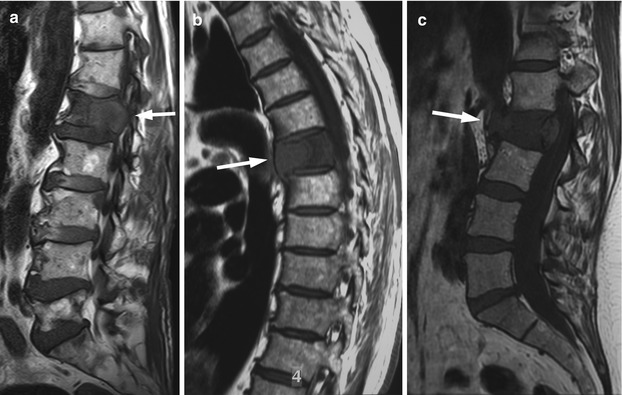 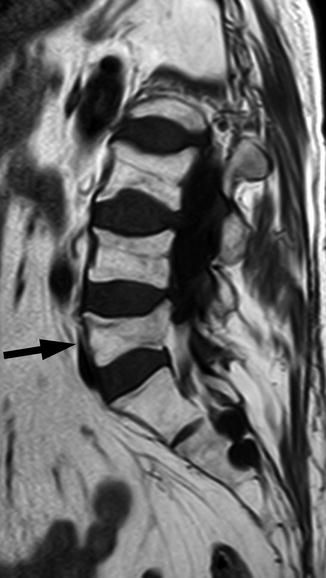 As noted above, most acute benign VCFs exhibit low T1 signal involving only part of the vertebral body, related to marrow edema. In some of these fractures, the edema takes the shape of a band-like pattern of low T1 signal adjacent and parallel to the depressed endplate (Fig. 8.10). The band-like abnormal signal may take one of the shapes depicted in Fig. 8.11 [13]. This has been shown to be a highly specific, albeit not very sensitive, sign for a benign vertebral fracture [9, 14, 21, 30, 31]. Caution is warranted to rule out nodularity of the band-like area of abnormal signal, which may be a sign of malignancy [14]. 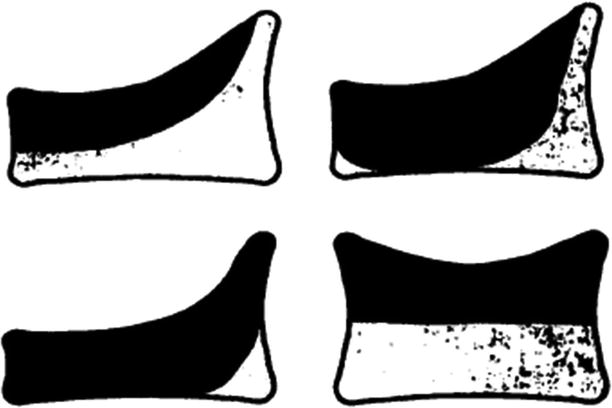 The MRI fluid sign consists of a linear or triangular area of very high T2 signal located adjacent to the impacted endplate, most often along its anterior aspect [21] (Fig. 8.12). More rarely it is seen centrally within the fractured vertebral body [32]. The sign has been almost exclusively described in benign osteoporotic fractures and is generally considered one of the strongest MRI predictors of VCF benignancy [33]. It has been shown that the MRI fluid sign and the intravertebral vacuum cleft sign, seen on plain radiographs and CT, represent the same phenomenon [20, 32] (Fig. 8.13). The intravertebral cleft corresponds to a region of osteonecrosis associated with a non-healing vertebral fracture [22]. In the standing position, the walls of the cleft are apposed. In the supine position, spinal extension results in gaping of the cleft which then fills with gas from the surrounding tissues, as a result of the generated negative pressure. This produces the intravertebral vacuum cleft sign observed on plain radiographs and CT exams. If the supine positioning is prolonged (as is the case in a typical MRI exam), the gas in the cleft is progressively replaced by fluid originating from the adjacent marrow edema leading to the appearance of the MRI fluid sign. This has been demonstrated in studies with sequential MR imaging [20, 32]. The presence of gas or fluid in an intravertebral cleft depends, therefore, on time and position. On MR images obtained immediately after supine positioning, the cleft may have a partial or complete signal-void appearance due to the presence of air (Fig. 8.14). 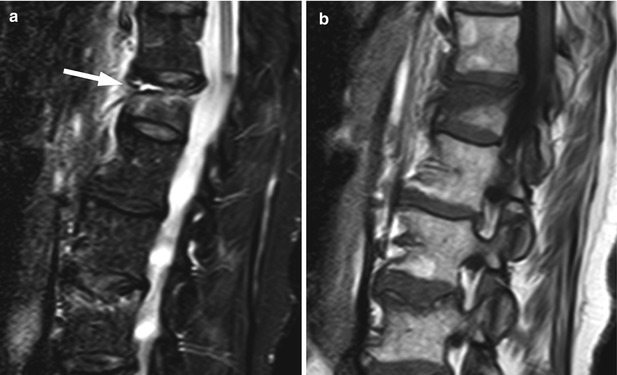 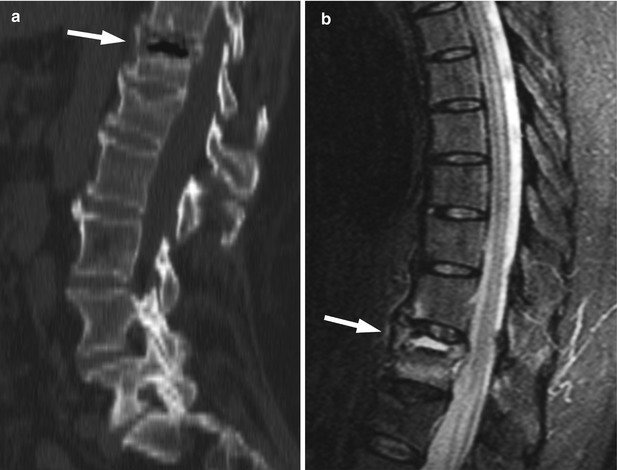 Acute benign vertebral compression fracture, intravertebral vacuum cleft sign (CT), fluid sign (MRI).
Sagittal CT image of the lumbar and lower thoracic spine (a) and sagittal MRI STIR image of the thoracic spine (b) of a 72-year-old woman with an acute osteoporotic fracture of T12 (same patient as Fig. 8.4). On the CT image, a collection of gas (arrow) beneath the superior end plate of the collapsed vertebra is seen (intravertebral vacuum cleft sign). High signal fluid within the cleft (arrow) is noted on the STIR image (MRI fluid sign) 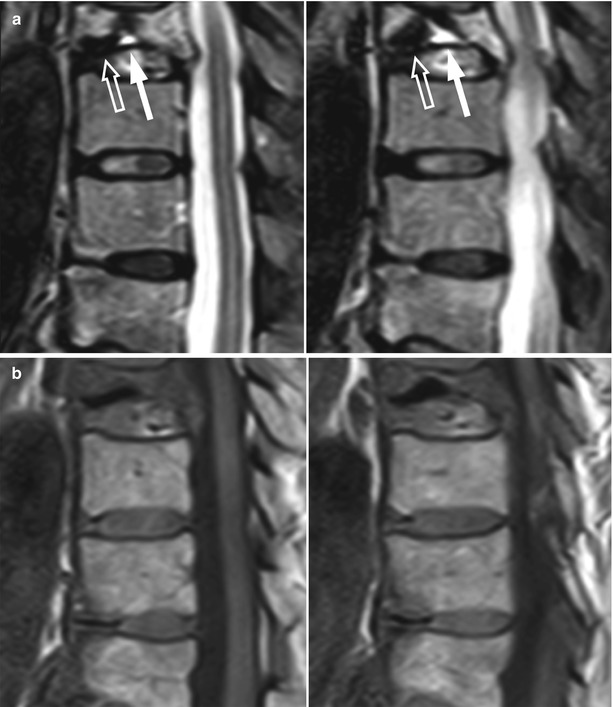 Acute benign vertebral compression fracture, coexistence of fluid, and air within intravertebral cleft.
Contiguous sagittal STIR images (a) of the spine of a 67-year-old woman with an acute osteoporotic fracture of T9 show an intravertebral cleft with coexisting signal-void (air, open arrow) and hyperintense (fluid, white arrow) content along the inferior end plate. Also note complete replacement of normal marrow signal in the vertebral body due to edema. Corresponding sagittal T1-weighted images (b) are also shown

T1, STIR, and T1 contrast-enhanced with and without fat-saturation sequences are all valuable for the assessment of morphologic characteristics. STIR and T1 contrast-enhanced with fat-saturation sequences may increase the conspicuity of pedicle involvement. Axial slices are useful for the evaluation of paraspinal and epidural soft-tissue masses. Only characteristics with a statistically significant difference in incidence between benign and malignant VCFs in more than one published original report are discussed below.

A convex posterior vertebral border has been associated with malignancy. As already noted, for a malignant compressive fracture to occur, most of the vertebral marrow must be replaced. When the vertebral body collapses, the compressed tumor mass will protrude beyond the vertebral contours leading to a smooth diffuse convexity of its borders (posterior, anterior, or both) [14] (Fig. 8.7). A diffuse convex posterior border was found in 70 % of malignant vertebral collapses versus 6 % of osteoporotic collapses by Cuenod et al. and in 74 % versus 20 %, respectively, by Jung et al. [9, 13].

Retropulsion of a Posterior Bony Fragment

Retropulsion of a bone fragment is associated with a benign VCF. It is usually located in the posterosuperior angle of the vertebral body (Fig. 8.15). In one study, this sign was found to be 100 % specific (i.e., no malignant fractures displayed the finding) but had a very low sensitivity (16 %) [13]. In another study, it had higher sensitivity (60 %), but it was found in 11 % of metastatic fractures as well [9]. 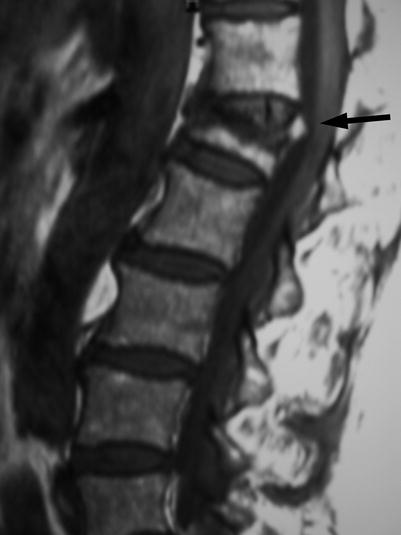