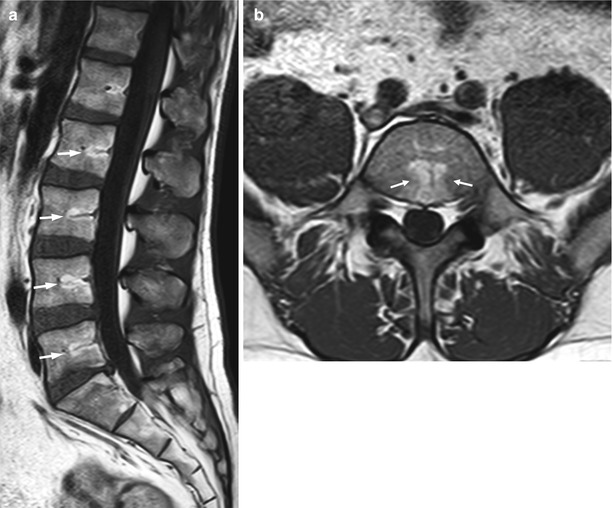 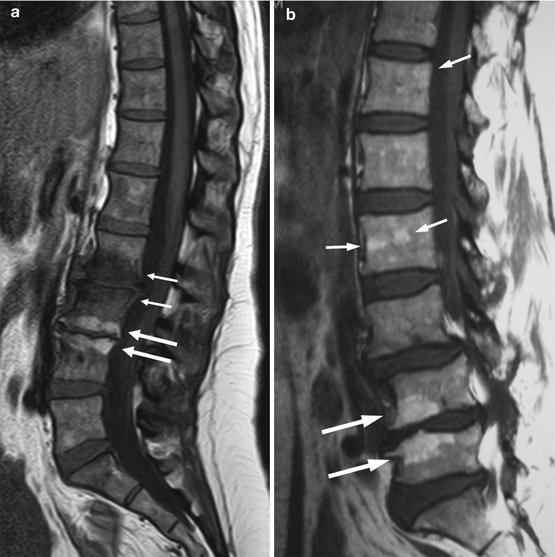 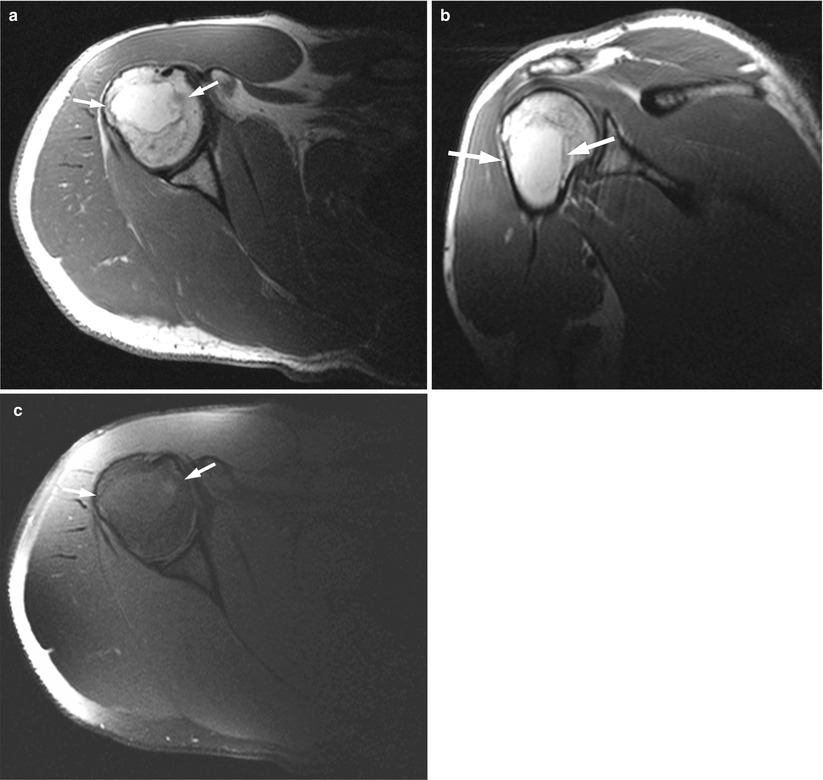 Hyperintense focal pattern, intraosseous lipoma.
Axial (a) and coronal (b) T1-weighted images of the shoulder of a 31-year-old man show a hyperintense focal lesion (arrows) in the humeral metaphysis. On corresponding axial T1-weighted image with fat suppression (c), the signal of fat is suppressed, and the lesion (arrows) becomes almost isointense to surrounding bone marrow

Focal lesions of neoplastic or infectious origin may become partially or completely hyperintense when, during the healing process, fatty marrow reappears from adjacent, unaffected bone marrow. A bone infarct (or osteonecrotic lesion depending on location) is yet another cause of focal bone marrow hyperintensity; a geographic, low-signal-intensity rim surrounding the hyperintense focus is pathognomonic of such a lesion (Fig. 4.6). 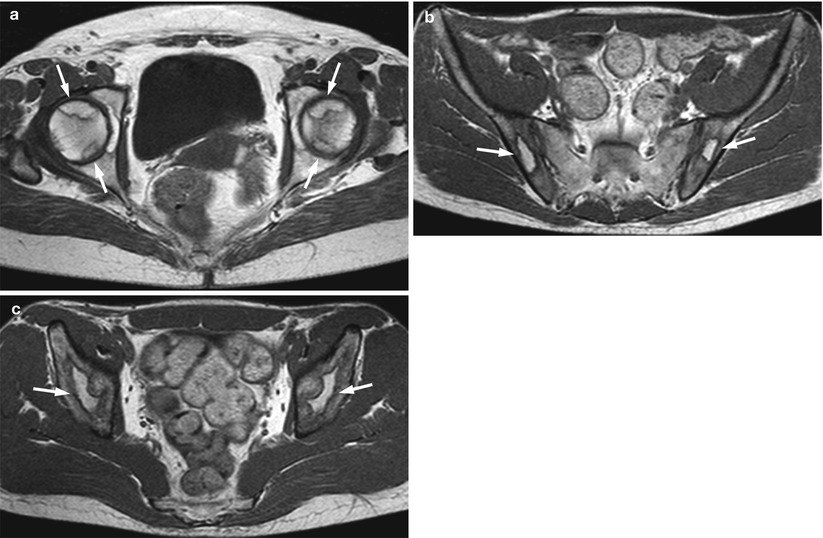 Hyperintense focal pattern, bone infarcts.
(a) Axial T1-weighted image of the pelvis of a 57-year-old woman with avascular necrosis of the femoral heads after radiotherapy for cervical cancer shows hyperintense foci surrounded by hypointense rim in the subarticular surface of both femoral heads (arrows). (b, c) Axial T1-weighted images of the pelvis of a 21-year-old man with multiple bone infarcts following steroid therapy for Hodgkin lymphoma show hyperintense lesions surrounded by hypointense rim in both iliac bones (arrows)
Malignant hyperintense focal bone marrow patterns may be caused by melanoma metastases or hemorrhagic myelomatous lesions; however, both are extremely rare [5, 6] (Fig. 4.7). 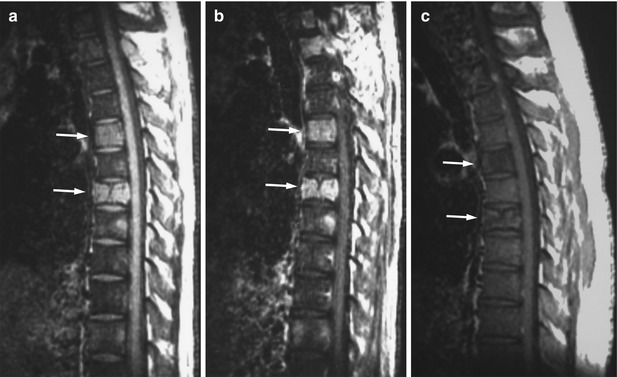 Hyperintense focal pattern, hemorrhagic myelomatous lesions.
(a, b) Sagittal T1-weighted images of the thoracic spine of a 30-year-old man with newly diagnosed multiple myeloma, before (a) and after (b) contrast administration, show hyperintense focal lesions at several levels presumably due to hemorrhagic plasma cell infiltrates. Arrows point to representative lesions. The remaining marrow is diffusely hypointense due to anemia-related reconversion. (c) Resolution of the hyperintense signal on a posttreatment T1-weighted image 1 year later (arrows) confirms hemorrhagic nature of the lesions
Key Points

In an adult, hypointense marrow foci are a common finding, and they are often due to rests of hematopoietic marrow. The signal intensity of such red marrow foci is higher than that of adjacent muscles or nondegenerated intervertebral discs, although, occasionally, it may be equal to them, particularly in young adults (Fig. 4.8). Compared to malignant bone marrow lesions, foci of red marrow have less distinct borders. A focus of fat in the center of a hypointense focal bone marrow lesion (bull’s eye sign) is characteristic of a red marrow rest as it reflects the centrifugal pattern of red to yellow marrow conversion, at cross section [7].

Hypointense focal pattern, red marrow.
Sagittal T1-weighted image of the lumbosacral spine of a 48-year-old man shows multiple, hypointense red marrow foci on a background of fatty marrow (mosaic pattern of bone marrow conversion)
An atypical hemangioma is a diagnosis applied to an incidental, solitary, hypointense focal marrow lesion, when all other diagnoses have been excluded and the patient has no known history of malignancy (Fig. 4.9). Other benign primary bone tumors, such as osteoblastoma, aneurysmal bone cyst, and enchondroma among others, may present as hypointense foci. These tumors, as well as most primary malignant bone tumors, usually have characteristic findings on conventional radiographs, CT, and MRI and rarely present as a diagnostic dilemma. 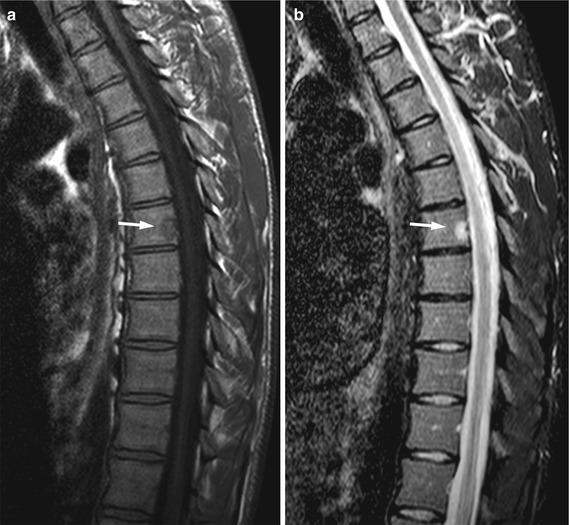 Hypointense focal pattern, atypical hemangioma.
(a) Sagittal T1-weighted image of the thoracic spine of a 25-year-old healthy man shows a hypointense lesion (arrow) at the posterior aspect of the body of T7. (b) On corresponding sagittal STIR image, the lesion (arrow) is hyperintense to marrow
Bone metastases and hematologic malignancies are the most common malignant causes of focal hypointense patterns; such lesions are usually well-defined, with a sharp transition zone to adjacent uninvolved marrow, and they are hypointense to disc and muscle. They occur more often in older individuals, in whom fatty marrow is abundant in the central skeleton, and thus are easily depicted as “holes in the marrow” (Figs. 4.10 and 4.11). 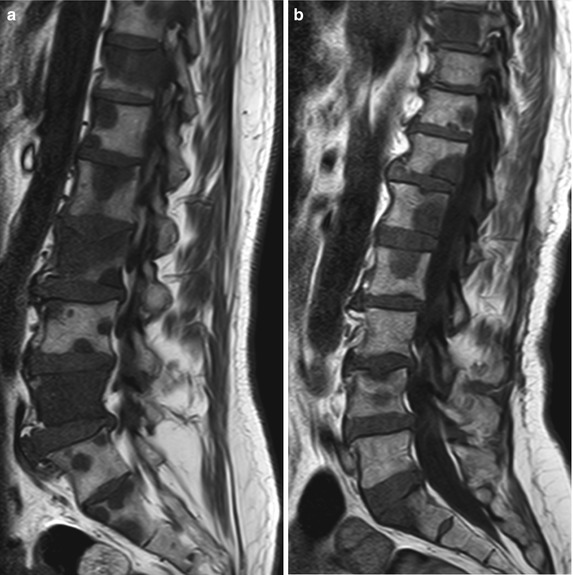 Hypointense focal pattern, bone metastases.
Sagittal T1-weighted images of the lumbosacral spine of a 53-year-old man with colon cancer (a) and a 62-year-old woman with lung cancer (b) show multiple hypointense focal lesions throughout the spine against a background of apparently normal fatty marrow, consistent with bone metastases 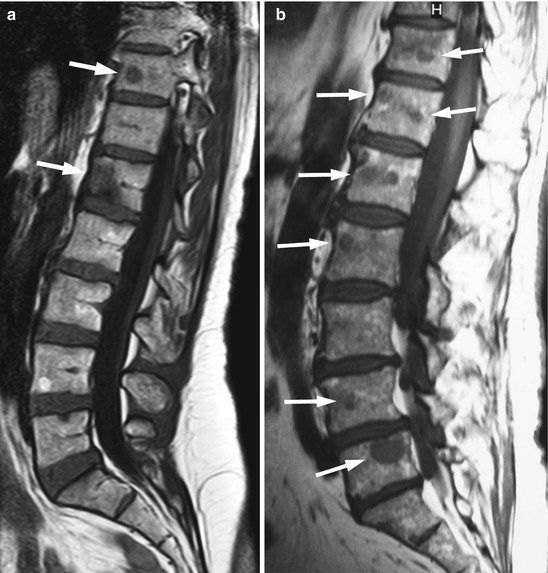 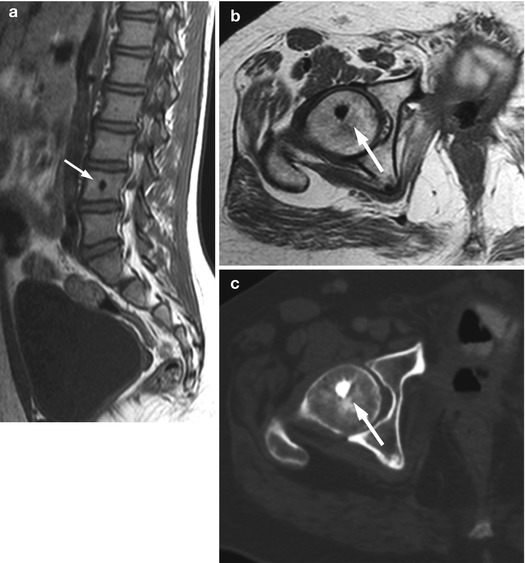 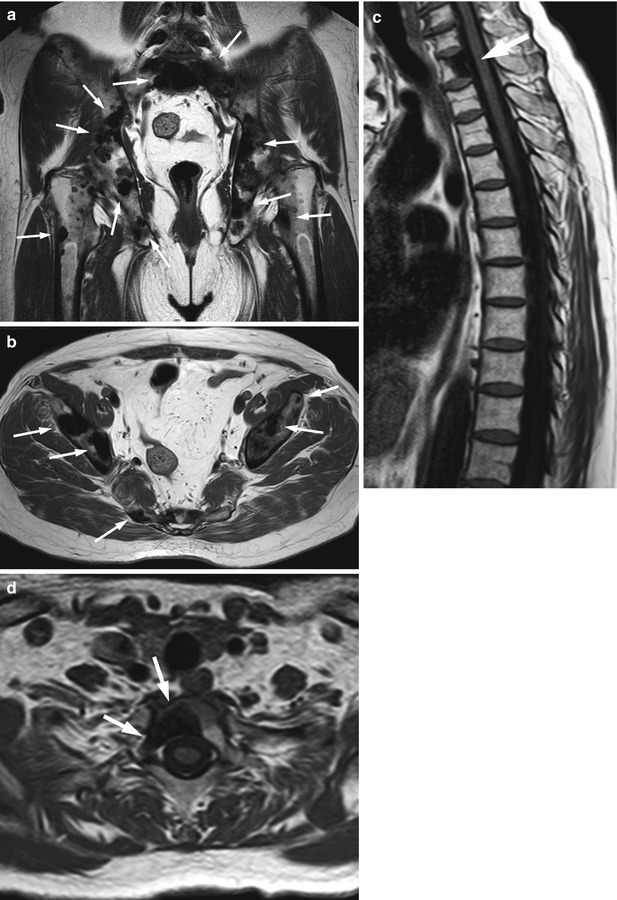