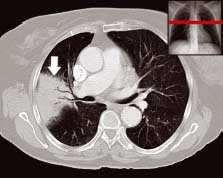 The wedge-shaped segment of high density (arrow) is consolidation. There are several branching airways which have remained open (black) within surrounding small airways that are full of pus (grey). This phenomenon is known as ‘air bronchogram’ and is a characteristic finding of consolidation of the lung
33.2 Pleural effusion (soft tissue windows) 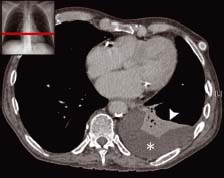 The patient is lying down for the scan and so the effusion appears as a crescent of fluid collected in the posterior pleural space (*). As is often seen with pleural effusions there is an area of atelectasis (collapse) seen at its upper surface (arrowhead)
33.3 Pneumothorax (lung windows) 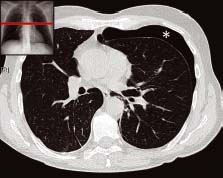 There is a large crescentic rim of air (*) seen at the front of the left pleural space. It has collected here because the patient is lying down whereas on an erect CXR it would collect at the lung apex. Note the density (blackness) of the air collection is exactly the same as the air outside the chest wall
33.4 Emphysema (lung windows) 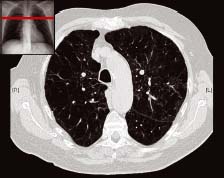 This patient has marked bullous emphysema. Holes throughout the lung parenchyma distort the pulmonary vessels. This mainly affects the upper parts of the lungs in smoking-related cases. The shape of the chest is also changed due to lung hyperexpansion such that the chest is wider than normal from front to back
33.5 Bronchiectasis (lung windows) 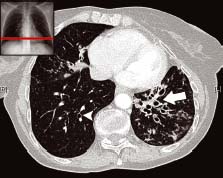 In the left lung there is a ‘bunch of grapes’ appearance (arrow) which indicates a localised area of severe bronchiectasis. The airways are bigger than their accompanying vessels. This can also be seen in the right lung (arrowhead) but is much less severe
33.6 Fibrosis (HRCT lung windows) 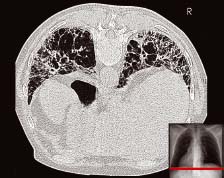 The patient has been scanned in the prone position. There are ‘honeycomb’ holes in the lung parenchyma. Unlike emphysema these holes have thick walls
Only gold members can continue reading. Log In or Register to continue