Many of the diseases discussed in the Chapter 3 (Parenchymal Diseases of the Kidney) can progress to complete renal failure. Nephrons are destroyed or lose their function. The kidneys of patients with polycystic kidney disease have a recognizable appearance with large kidneys comprised of innumerable cysts of varying sizes. Other conditions have less recognizable features once terminal uremia becomes established. A study of 67 patients with uremia during the period before dialysis was started showed that the two leading causes of uremia were chronic glomerulonephritis and diabetic nephropathy.1 Normal kidney size and high reflectivity on ultrasound were common among the diabetic nephropathy group, whereas chronic glomerulonephritis patients had kidneys that were small and highly reflective (Fig. 4.1). There have been numerous claims for the ability of ultrasound to characterize renal parenchymal disease. However, despite ultrasound trends favoring one diagnosis or another, there is still the need for renal biopsy to reach a definite diagnosis.2Doppler ultrasound of the renal interlobar arteries demonstrates that the resistive index (RI) has a value in determining prognosis of renal failure. A progressive lowering of the renal RI during follow-up of acute renal failure is correlated with recovery of renal function.2Likewise, in chronic nephropathies a high renal RI at initial presentation predicts that there will be progressive renal failure.3

Small, high-reflective kidneys may be difficult to locate with ultrasound, particularly on the left, as the adjacent perirenal fat can appear very similar (Fig. 4.1b). The movement of a kidney with respiration may be the only feature that allows detection.

Diseases Associated with the Native Kidneys

Acquired Cystic Disease of the Kidneys

Proliferative changes in the native kidneys of patients with end-stage renal failure lead to the formation of small cysts and adenomas in up to 60% of cases. This usually occurs once the patients are on dialysis and is equally common whether hemodialysis or peritoneal dialysis is used.4 There is a preponderance of males affected; there is also a tendency for the rate of increase in the size of kidneys due to acquired cystic disease (ACDK) to be greatest in young males.5 This increase in size can even mimic the appearances of adult polycystic disease.6 The frequency of ACDK increases with the duration of dialysis.7 Once transplantation of a functioning kidney occurs, a degree of protection against the development of acquired cystic disease occurs; existing changes may even regress. Lack of regression of a focal area of cystic change in a patient following transplantation, when the rest of the cysts are regressing, is suspicious for the development of a cystic renal cell carcinoma (RCC).8 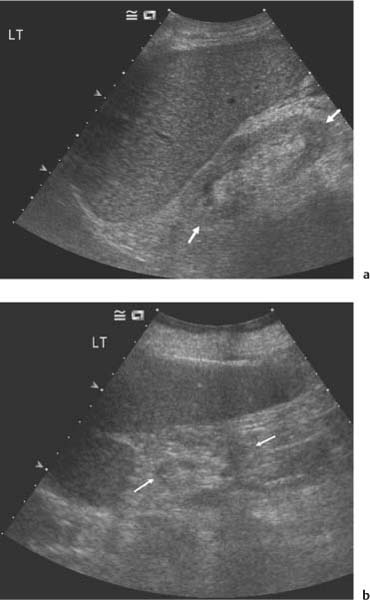 Ultrasound shows the presence of small cysts in the kidneys (Fig. 4.2). These cysts may number only a few but can be very numerous. If enough cysts are present, the kidneys become enlarged.5 Small cysts may be indistinguishable from small solid lesions. This is not important. However, the development of larger or enlarging solid masses is of concern for malignant change.

ACDK is associated with an increased risk of bleeding either into the kidney or into the perinephric space. In a study of 30 dialysis patients over seven years, 17% developed large hemorrhagic cysts and 13% developed large perinephric hematoma.9 These episodes of hemorrhage may be large enough to be life-threatening; three out of eight patients in another series died as a direct result of hemorrhage.10 As expected the episodes of hemorrhage are more likely to occur in patients on anticoagulant therapy.

There is an increased risk of RCC in patients with ACDK which is over and above any risk from the underlying condition or any immunosuppressive therapy.11 The high prevalence of RCC in patients with ACDK (3.4%) makes screening of the native kidneys before transplantation sensible,12 though there is not universal agreement that annual screening of dialysis patients is worthwhile.13 There is also an increase in the rate of urothelial carcinoma of the upper renal tracts, particularly those with toxic nephropathies such as analgesic nephropathy, but this is unrelated to ACDK.14 Furthermore, there is an increase in gastrointestinal malignancies in dialysis patients. In one study, a combination of fecal occult blood testing, endoscopy, and ultrasound revealed 10 malignant tumors in 178 patients starting dialysis and 34 patients on maintenance dialysis.15 Not surprisingly, the authors advocate regular gastrointestinal screening for dialysis patients, though importantly this is based on a Japanese population with a higher prevalence of gastrointestinal disease than in Europe. 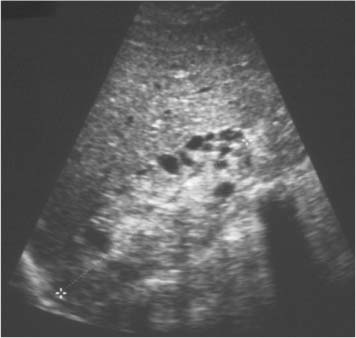 It is estimated that 5–13% of all dialysis patients will develop renal calculi.18 The total volume of urine production in dialysis patients is variable, but even so most patients who develop calculi will spontaneously pass the calculi. Watchful waiting is advised. However, if active treatment is needed then standard treatment with lithotripsy or ureteroscopy carries no greater complication rate than in nondialysis patients. Bilateral nephrectomy for severe, recurring stone disease is advisable in patients who are candidates for renal transplantation. There is an increased cardiovascular mortality rate in dialysis patients. It is possible, using a measurement of the carotid intimamedial thickness to stratify the risk; those with the increased intimamedial thickness have the greatest probability of death from a cardiovascular cause (Fig. 4.4).19 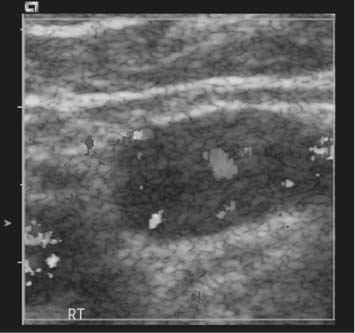 Fig. 4.3 An oval low-reflective vascular abnormality lying at the lower aspect of the left lobe of the thyroid, in keeping with parathyroid hyperplasia in a patient with CRF 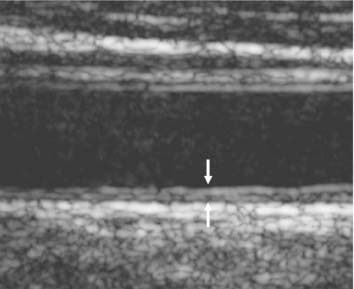 Fig. 4.4 A longitudinal view of the distal common carotid artery in a patient with chronic renal failure, demonstrating an intimamedial thickness of 1.2 mm (between arrows), suggesting an increased risk of cardiovascular disease 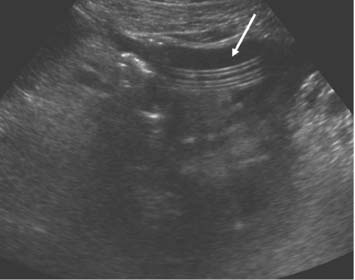 • Ultrasound cannot reliably predict the underlying cause of chronic renal failure, though there are pointers

• Once on dialysis, native kidneys may undergo cystic change

• There is an increased risk of malignant transformation

• Regression of cystic change may occur after transplantation

A long-term indwelling peritoneal catheter is used for the instillation of dialysis fluid into the peritoneal cavity. Then, after an interval to allow passage of waste products across the peritoneum, the fluid is drained back out. Ultrasound has a role in guiding access to the peritoneum and in assessing the complications of continuous ambulatory peritoneal dialysis (CAPD).

Infection of the peritoneal dialysis catheter in its abdominal wall tunnel or at its exit through the skin is a common cause of loss of the catheter. Exit-site infections are defined as purulent discharges at the skin exit and are mostly due to Staphylococcus aureus; localized erythema around the catheter may be a less serious form of the infection.20 Ultrasound is required for the diagnosis of tunnel infections and is indicated in those who have exit-site infections and those who have symptoms of peritonitis. Ultrasound features are of a low-reflective “cuff” of fluid surrounding the catheter (Fig. 4.5).21 The presence of this pericatheter fluid predicts those that are at risk for catheter loss.22 Measurement of the width of the pericatheter fluid may also allow prediction of which patients are responding to antibiotic treatment. One study demonstrated that patients who responded and did not require catheter removal had a decrease in the fluid width from 7 mm to 3.75 mm at two weeks.23 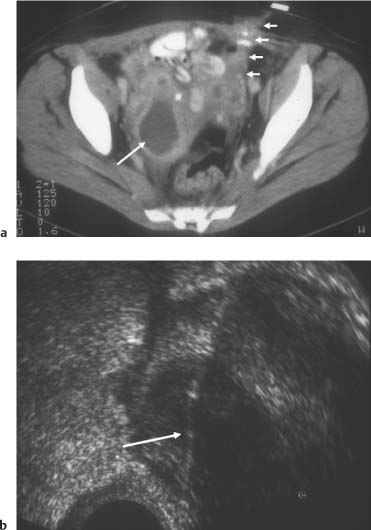 Fig. 4.6 a A computed tomography (CT) image of a pelvic collection (long arrow) that developed as a complication of CAPD infection (short arrows). Access for percutaneous drainage is limited by surrounding bowel and other pelvic structures. b Transvaginal ultrasound-guided drainage (arrow) of the collection shown on the CT image. The transvaginal route will allow drainage of fluid collections that would otherwise be inaccessible by the percutaneous route 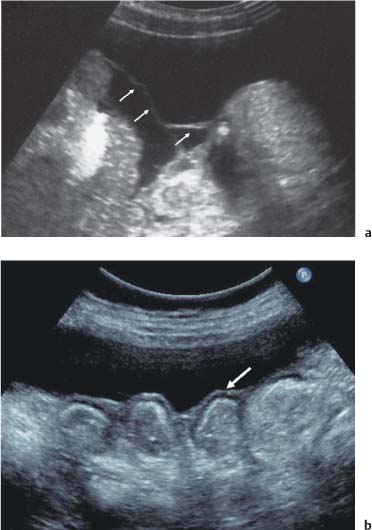 Fig. 4.7 a Intraperitoneal fluid demonstrating fine stranding (arrows) in a patient on CAPD. b A thickened layer of peritoneum seen lying as a continuous line over the surface of several bowel loops indicative of sclerosing peritonitis (arrow)