Diseases of the Collecting System and Ureters

9 Diseases of the Collecting System and Ureters

The pelvicalyceal system and ureter transport urine from the collecting tubules in the renal medullary pyramids to the bladder. The renal pelvis and calyces lie in the center of the kidney, surrounded by the fat of the renal sinus, which also contains the segmental arteries and veins.

One of the most common reasons for requesting a renal tract ultrasound is to confirm or exclude obstruction, either as a cause of renal failure or as a source of possible renal colic. Obstruction can be acute, as in the case of an impacted ureteric calculus, or develop more slowly, as in cases of ureteric transitional cell carcinoma (TCC). It is important to distinguish between dilatation of the collecting system due to obstruction and nonobstructive dilatation, which can result from several causes, including diuresis or a distended bladder; these situations are discussed in more detail below. Conversely, significant obstruction may be present with only minimal dilatation of the collecting system; this situation occurs most commonly with recent acute obstruction but can also be seen in cases of retroperitoneal fibrosis. Therefore, although ultrasound is sensitive for the detection of renal dilatation, it is essential that the ultrasound appearances are interpreted in the light of the clinical picture, rather than in isolation.1

In the early stages of acute, severe obstruction, there may be a reflex decrease in the production of urine,2which can last for two to three hours. This means that significant dilatation of the pelvicalyceal system may not be apparent in these early stages3 and a repeat ultrasound examination five to eight hours after the onset of symptoms should be considered in appropriate cases.

The earliest sign of obstruction on ultrasound is “splitting” of the collecting system within the sinus fat.4 This becomes more marked if significant obstruction persists, with increasing prominence of the collecting system (Fig. 9.1). In addition, the high intrarenal pressure can produce some thinning of the parenchyma and an increase in overall renal size; both of these will return to normal after early relief of the obstruction. Extravasation of urine into the perirenal tissues may occur if obstruction persists, in one study with computed tomography (CT), 22% of patients had moderate or severe perinephric fluid collections after four hours of obstruction.5 This perinephric fluid can also be identified on ultrasound (Fig. 9.2) and in a few cases a significant urinoma may develop.

Once pelvicalyceal dilatation has been identified, it is important to try and ascertain the level of obstruction and, if possible, the cause. In the first instance it is worth looking in the pelvis, as a dilated lower ureter with a calculus (Fig. 9.3) or a pelvic mass may be identified behind the bladder; alternatively a bladder tumor may be seen. Careful scanning of the para-aortic and paracaval areas may show a dilated ureter, or identify a mass causing the obstruction; although overlying bowel gas makes visualization of these areas more difficult.

In patients with a duplex system (see below), only one of the moieties may be affected by obstruction and distinction from changes resulting from reflux will depend on the clinical situation.

The use of ultrasound together with a plain film of the abdomen and pelvis (kidneys, ureter, bladder [KUB]) has been shown to be accurate in the diagnosis of renal colic and is a viable alternative to the intravenous urogram for the diagnosis of ureteric colic arising from calculi.6

An obstructed system is often infected to a greater or lesser degree. If the obstruction is not relieved, this can result in pyonephrosis, which, in turn, can produce septicemia. Pyonephrosis is recognized on ultrasound by identification of echogenic material within the dilated collecting system (Fig. 9.4); some layering out of the debris may also be observed.7 In patients with infection by gas-forming bacteria, emphysematous pyelitis, the gas can obscure the view of the dilated collecting system unless an appropriate scan plane is used to scan from the side rather than from a superior approach. Debris may not be apparent in some patients, leading to a false negative examination; conversely echoes may be seen in a dilated, but uninfected, renal pelvis as a result of hemorrhage. It is therefore important to carry out diagnostic aspiration if infection is suspected on clinical grounds. 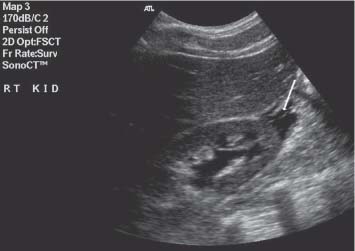 Fig. 9.2 Mild to moderate splitting of the pelvicalyceal system in a patient with acute ureteric obstruction with a small collection of urine at the lower pole (arrow) 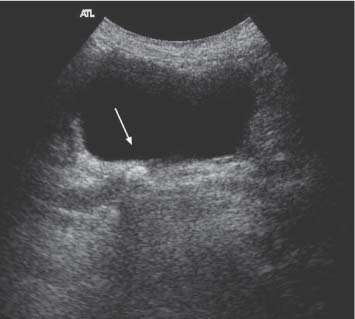 Fig. 9.3 A calculus (arrow) in a dilated ureter impacted at the vesicoureteric junction (VUJ)

Fig. 9.4 Pyonephrosis. a Original scan showing hydronephrosis with some associated loss of cortex. This was treated with nephrostomy and ureteric stenting. b One year later the patient presented with septicemia and features suggestive of a pyonephrosis on ultrasound. This was secondary to a blocked stent. A nephrostomy was inserted, the pus drained, and the patient improved. Thick turbid echoes (arrows) can be seen in both the renal pelvis and calyces consistent with pus. Cf. the “clean” hydronephrosis in a

Other Ultrasound Techniques in the Diagnosis of Obstruction

Other ultrasound techniques which may be used in the assessment of possible acute ureteric obstruction include assessment of the intrarenal resistive index (RI), identification of ureteric jets in the bladder, and diuretic-enhanced sonography.

Doppler findings: The pathophysiological effects arising from acute obstruction are complex.8 There is a transient increase in renal blood flow two to four hours after the onset of obstruction; following this, three to five hours after obstruction, various circulating and local factors produce vasoconstriction. If obstruction persists, then profound renal vasoconstriction develops after 18–24 hours which persists until the obstruction is relieved. Even then, residual long-term damage may result from this relative ischemia. In addition, dilatation of the collecting system resulting from acute obstruction produces an increase in intrarenal pressure. These changes result in a decrease in diastolic arterial blood flow, which occurs approximately six hours after the onset of obstruction and can be detected by an increase in the RI in the intrarenal arteries;9 the measurement should be made in the segmental, interlobar, or arcuate arteries, as the RI tends to be higher in the larger vessels at the renal hilum. In nonobstructed kidneys without any other pathology, the RI is < 0.7 and the difference between the RI for the two kidneys is < 0.1. An RI > 0.7 and/or a difference of > 0.1 in the RI between the two kidneys (Fig. 9.5) is therefore indicative of obstruction.4,10,11

It should be remembered that the RI tends to increase with age, and values of 0.7, or higher, are not excessive in a 70-year-old patient;12 in this situation, the difference in RI between the two sides is therefore the more important criterion for diagnosis. Similarly, the RI in young children (< 4–5 years) is relatively high.4,13 In very early cases of obstruction, the RI may not yet have increased for the reasons described above.8 The presence of parenchymal disease may also lead to an increase in the RI, although the changes are bilateral in these cases and there is no significant difference between the two sides. The use of nonsteroidal anti-inflammatory drugs (NSAIDs) to treat the pain of renal colic has been shown to decrease the RI in obstructed kidneys, and although a difference between the obstructed and nonobstructed sides persists, this is less marked than in untreated patients.14,15

Ureteric jets: Examining the lower bladder with color Doppler will show jets of urine coming from the ureters. The frequency of these depends on the degree of hydration/diuresis of the patient, but in normal circumstances they should be symmetrical in shape and of similar frequency bilaterally (Fig. 9.6).16 The presence of an obstructing calculus will reduce the frequency, or stop these jets; edema of the vesicoureteric junction (VUJ) can result in alteration to the shape and direction of the jets (Fig. 9.7).17 It has been noted that pressure from the uterus can affect the ureteric jets on one side or the other,18 and third trimester patients with possible renal colic should be examined in the decubitus position to relieve this pressure.19 Congenital abnormalities of the VUJ may also result in abnormally shaped, or misdirected jets. 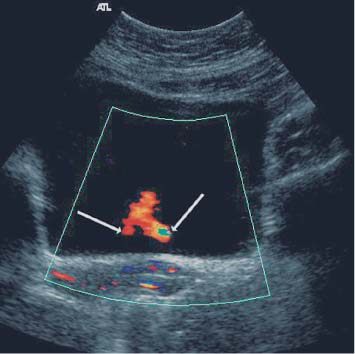 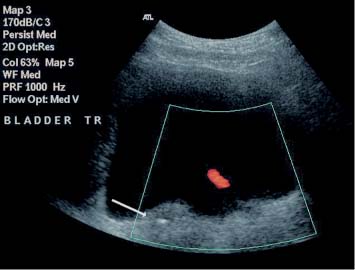 Fig. 9.7 A transverse scan of the bladder showing a calculus impacted at the right VUJ (arrow). Despite scanning for several minutes a right ureteric jet was not identified

Diuretics: Diuresis-enhanced ultrasound of a kidney with possible obstruction may occasionally be of value. If there is minimal dilatation of the collecting system but a strongly suggestive history for obstruction, or if there is difficulty in distinguishing between a possible parapelvic cyst and an obstructed system, then scanning after a fluid load and an injection of a diuretic (40 mg frusemide) may show a distinct increase in the degree of dilatation in the presence of obstruction.20 Measurement of the RI in the affected kidney may also show an increase in the presence of obstruction to > 0.75, whereas the RI in an unobstructed kidney will remain below this level.21

In long-standing, severe obstruction there is loss of parenchyma due to atrophy, which can be variable in extent. Dilatation of the collecting system is variable but can be very marked.4 In some severe cases, no recognizable cortex remains and a cystic mass represents the massively dilated collecting system (Fig. 9.8).

It is important to distinguish between obstructive and nonobstructive dilatation of the collecting system: The former needs continuing monitoring and possible intervention, whereas, with the latter, time can be taken to discover the cause and subsequent management decisions can be made at a more leisurely pace.

Asymptomatic dilatation of the renal collecting system is not uncommon in pregnancy; it can be detected as early as 12–14 weeks gestation. By 36 weeks gestation, dilatation can be seen in two thirds of subjects more commonly on the right side.22,23 This is due to a variety of factors, including a 20–25% increase in the circulating blood volume, increased cardiac output, generalized vasodilatation, and parenchymal hypertrophy. In addition, the presence of a large pelvic mass in the later stages of pregnancy and hormonal factors all contribute to dilatation of the renal collecting systems. Following delivery, the renal parenchymal volume returns to normal within a few days, although the collecting system changes can take a few weeks and some residual prominence may persist for longer. A diagnostic dilemma can occur if a pregnant woman develops symptoms that may be due to renal colic. Intrarenal resistance indices are not normally altered by pregnancy,24,25 so assessing the inter-renal RI difference (see above) may be of value in this type of case as they should be equal and similar to those of a nonpregnant woman; a difference of > 0.1 between the two kidneys would be indicative for obstruction. Examination of intravesical ureteric jets may also contribute to the diagnosis but, as noted above, care is required in making the assessment.18,19

In patients with a fluid load, diuresis, and a full bladder, there is physiological dilatation of the pelvicalyceal system (Fig. 9.9

Tags: Ultrasound of the Urogenital System
Jan 14, 2016 | Posted by admin in GENITOURINARY IMAGING | Comments Off on Diseases of the Collecting System and Ureters
Premium Wordpress Themes by UFO Themes
WordPress theme by UFO themes