Anatomical Relationships of the Kidney

The normal anatomical relationships of the kidney have been appreciated for many years. They are retroperito-neal organs lying on either side of the vertebral column, traditionally the left kidney lying at a higher level than the right and being shaped as the name implies (Fig. 2.1a). In general the lower poles lie more laterally than the upper.

Medially they are bordered by the psoas muscle, with the aorta on the left and the inferior vena cava (IVC)on the right, and superiorly by the adrenal glands. The anterior relationships of the kidneys are many (Fig. 2.1b). The kidneys themselves are surrounded by perirenal fat with a further layer of renal fascia both anteriorly and posteriorly, i. e. Gerota’s fascia, which separates the perirenal from the pararenal spaces. Although not visualized on ultrasound, these are much better appreciated on computed tomography (CT; Fig. 2.2) and are more easily delineated when retroperitoneal fluid or inflammation is present. On the right, the reflection of peritoneum between the inferior surface of the liver and kidney, i. e. the hepatorenal fossa or Morrison’s pouch, is generally appreciated when ascitic fluid or fluid of any nature is present within the upper abdomen. This area between the right kidney and liver is often one area to specifically view when small amounts of abdominal fluid require detection (Fig. 2.3). 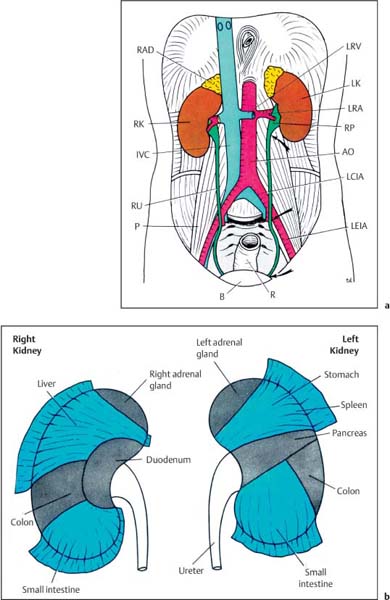 Fig. 2.1 a Coronal depiction of the anatomy of the posterior abdominal wall and retroperitoneum 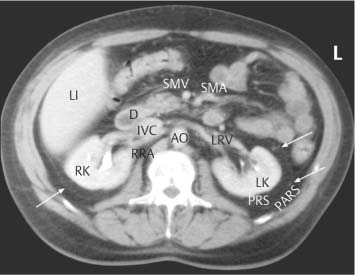 Fig. 2.2 Axial CT scan through the renal area. The main anatomical structures have been marked. The perirenal and pararenal spaces are separated by the anterior and posterior perirenal fascia, more commonly known as Gerota’s fascia (arrows) 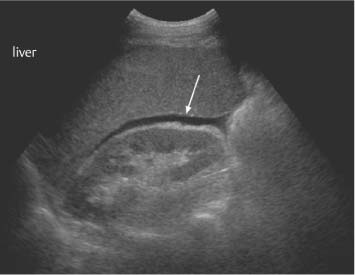 Fig. 2.3 A small amount of ascitic fluid is seen between the liver and right kidney (arrow). This is a key area to check for abdominal fluid

Anatomy of the Kidney

Embryologically the kidney begins within the pelvis and ascends to its normal anatomical position in the retroperitoneum of the upper abdomen. It is therefore possible that this superior migration can be prematurely interrupted at any point in the process. If the kidney is not observed in its normal anatomical position then, it should be sought within the lower abdomen or pelvis. The kidney develops from a number of “lobes” in the fetus, which normally merge, resulting in a kidney with a smooth surface. However, some may persist on the surface of the kidney, giving a slightly normal but nodular appearance known as fetal lobulation (see p. 24, Fetal Lobulation).1

Renal length is often quoted as being 10–12 cm, but a much wider range is normally visualized in patients with normal renal function, and any specific measurement should be related to the patient’s age and build, including height and weight.2 If renal size falls below these values, any comment on renal function without biochemical correlation should be guarded. In addition, it is important to remember that in some patients, because of the axis of the kidney, it may be difficult to measure a “true” renal length and some foreshortening may occur. Furthermore, there is both interobserver and intraobserver variation in such measurements and again this has to be taken into consideration.3What is certain, however, is that ultrasonic measurements are generally smaller than those traditionally used, for example with intravenous urogram (IVU), largely due to the lack of any radiographic magnification factor and the fact that ultrasound is the most accurate modality for defining renal length when compared with plain film, IVU, or renal angiography.4

The kidney itself is surrounded by a fibrous capsule with the renal parenchyma lying immediately beneath it. The cortex occupies the most peripheral margin, then the inner medulla, which consists of the renal pyramids arranged in an orderly fashion around the renal sinus, which largely consists of fat. Projections of cortex extending into the sinus between the pyramids are called septa or columns of Bertin.1

Apart from fat, the renal sinus contains the renal vessels, i. e. the artery and vein, and the renal pelvis. The tips of the pyramids project to the calyces, which point to form the collecting system and renal pelvis (Fig. 2.4). The renal pelvis in the majority is largely confined to the renal sinus. However, it may project out and be “extrarenal” in position. This is of no significance apart from that it may be confused with a para-pelvic cyst, hydronephrosis, or even in certain circumstances a perirenal fluid collection.

The renal veins lie anterior to the arteries and divide at renal sinus level. Most kidneys are supplied by a single renal vessel. However, accessory vessels are well-documented with an incidence of 20–27%.5,6 The main renal vessel itself divides into a number of segmental branches which then subdivide into interlobar branches with, finally, small branches running around the corticomedullary junction, called the arcuate vessels. 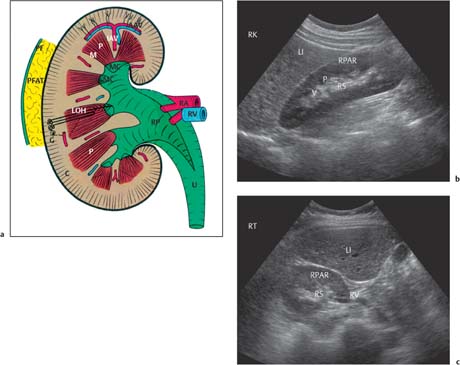 • The kidney develops from a number of lobes which, if they persist, may give a nodular surface known as fetal lobulation

• Most kidneys are supplied by a single artery; the incidence of accessory vessels is 20–27%

The patient is fasted as for an upper abdominal scan. However, it is normal in many institutions if only the kidneys are being interrogated not to specifically fast the patient, although this will clearly vary from center to center. The examination normally begins with the patient lying in the supine position; the right kidney is normally assessed first. The liver may be used as an acoustic window; the transducer is generally in a subcostal or intercostal position, depending on the patient’s build. The examination can be conducted in quiet respiration or the patient may be asked to breath-hold on inspiration. Imaging is normally performed in the longitudinal and axial planes. The kidney is then reexamined with the patient in the right oblique position, i. e. the right side raised, this being particularly useful if there is difficulty visualizing either the upper or lower poles in the supine position, which may occur for a number of reasons. The left kidney is also visualized, initially with the patient supine; scanning is performed in a more posterior and lateral position than that of the right kidney. In general terms the left kidney is a little more difficult to visualize due to bowel gas in the adjacent splenic flexure and/or small bowel, and because of this it is often necessary to raise the patient into a left oblique position and even into the full left lateral decubitus position to obtain suitable and complete access. The spleen, like the liver on the right, may also be used as an acoustic window.

Prone scanning may be useful in children, but in general terms is not merited in the adult apart from when performing a traditional renal biopsy.

With regard to the gray-scale findings, a number of criteria are normally considered. These include the renal size, parenchymal thickness, and subjective correlation with the patient’s age and build. In addition, the renal parenchymal echogenicity is also routinely assessed. Vasculature can also be assessed, although only superficially with gray-scale ultrasound. However, a more detailed examination can be performed with the color Doppler technique.


Apart from measuring renal length and assessing parenchymal thickness and echogenicity, it is important that the perirenal structures and organs are assessed. If a renal abnormality is present, then assessment of the entire urogenital tract, renal vein, IVC, liver, and retroperitoneum is appropriate.

The left kidney is normally a little larger than the right (Table 2.1).2,7 It is important when measuring renal size to measure the full length of the kidney, as previously mentioned, as it is easy to foreshorten and obtain a falsely low measurement. In general, multiple measurements give a more overall accurate measurement and routine measurements made in the supine and oblique positions help overcome any potential underestimation (Fig. 2.5). With good technique, measurement errors should be within 1.85 cm in the adult. However, inexperience and poor technique is likely to increase the margins of error. Renal length, however, is a good working overall assessment of the kidney and in most patients provides a fairly accurate assessment of renal size. Nevertheless, small differences in measurements should be interpreted with caution. These measurements are used commonly by the renal physician in conjunction with other criteria to help determine whether renal failure is likely to be acute or chronic. As a rule of thumb a renal length of > 10 cm is normal and < 9 cm would be regarded as abnormal, dependent on age, weight, and size of patient. A kidney < 8 cm is almost certainly a manifestation of chronic disease.

Volume measurements of the kidney can also be calculated either by measuring the area of the kidney in serial slices and summing (an accurate method)or by using various computerized elliptical drawings around the kidney itself. Both methods have errors, however, and as with renal length, these specific measurements, although important, may be less important than a change in value over a specific time period. A simpler and less time-consuming alternative for volume calculation is to measure the length, anterior-posterior, and transverse diameters of the kidney, and multiply all three by 0.5.

One study measuring renal length and parenchymal volume concluded that in those with normal renal function the length on the kidney was the most important measurement, whilst in end-stage renal failure the parenchymal volume was more appropriate.8

Although cortical and parenchymal thickness can be measured, it is important to remember that this is variable and, like renal length, depends upon age2,9 and size of the patient and exactly where the cortex or parenchyma is being measured. For completeness, the cortical thickness is the distance between the capsule of the kidney and the outer margin of the pyramid, whilst the parenchymal thickness is the distance between the capsule and the margin of the sinus echo (Fig. 2.6

Tags: Ultrasound of the Urogenital System
Jan 14, 2016 | Posted by admin in GENITOURINARY IMAGING | Comments Off on The Normal Kidney
Premium Wordpress Themes by UFO Themes
WordPress theme by UFO themes