The ideal ultrasound contrast agent for renal imaging should be safe, stable in the vascular system to survive pulmonary capillary circulation, and capable of modifying the acoustic properties of the regions of interest within the kidneys. Most of the current contrast agents satisfy these criteria to some degree. These agents consist of microbubbles which measure 2–10 μm in diameter and are well-recognized to be the most effective backscatterers (see below).1–4

Earlier agents were primarily designed to be blood pool agents and have been shown to be highly effective in enhancing spectral/color/power Doppler signals within the macrovasculature on fundamental, i. e. conventional imaging modes, lasting up to seven minutes following an intravenous bolus administration and approximately up to 15–20 minutes after an infusion.6,7 Agents such as SonoVue (Bracco Spa, Milan), Definity (Bristol Myers Squibb, Boston), Optison (Amersham, Oslo), and Imavist (Schering AG, Berlin), although primarily designed to be blood pool agents, have shown to be trapped or slowed in the hepatic sinusoids and spleen enhancing the parenchyma, which may last up to six minutes.8 This characteristic is useful for both the detection and characterization of lesions deficient of sinusoids, for example metastasis. These, therefore, appear as a filling defect.9 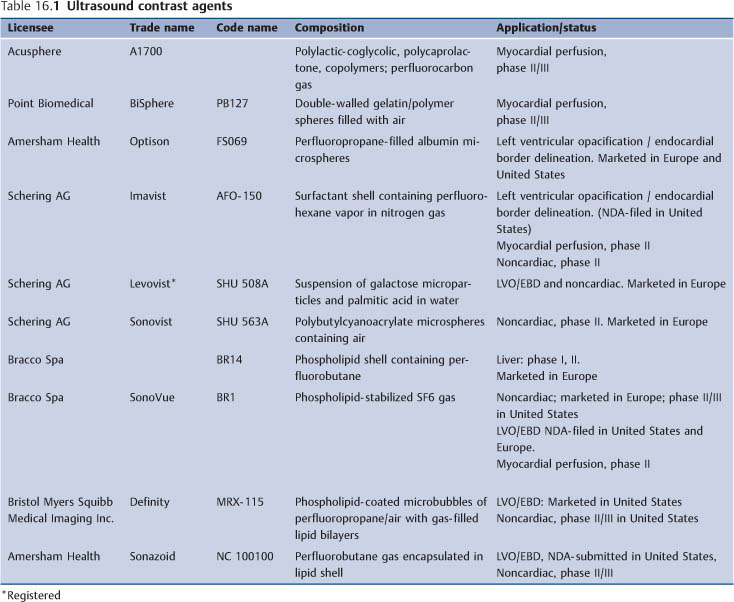 Agents such as NC100100 (Amersham, Oslo), Levovist (Schering AG, Berlin), and SHU 563A (Schering AG, Berlin) have additional tissue-specific properties.10–12 They are selectively taken up by the Kupffer cells of the reticuloendothelial system, after the vascular phase, and may enhance the normal hepatic and splenic parenchyma for up to an hour on either fundamental or harmonic, gray-scale, or Doppler modes, depending on the dosage used. The advantage of this property is that lesions which are deficient of Kupffer cells or associated with Kupffer cell dysfunction do not retain the contrast agent, thereby improving the lesionto-tissue contrast ratio. However, none of these agents have been shown to be trapped in the kidneys.

• Ultrasound contrast agents are very safe to use clinically

• They are now commercially available in Europe, North America, Latin America, and Asia

The interaction between the insonating ultrasound beam and the microbubbles is very complex; a basic understanding of their behavior under various sound fields has been fundamental to the development of improved methods of visualizing and displaying the contrast agents. On insonation at low amplitude (0–100 kPa), microbubbles behave as linear backscatterers, alternatively contracting and expanding according to the positive and negative pressures of the sinusoidal sound waves. As the incident pressure increases (100 kPA–1 Mpa) they begin to show nonlinear characteristics with emission of harmonics (i. e., on the negative portion of the sound waves the bubbles can become quite large, but on the positive portion there is a limit to which they can contract) and this asymmetry is what constitutes the harmonic emissions. With a further increase in the peak pressure of the incident ultra-sound field, the shell of the microbubble is disrupted; during this process a transient, strong, nonlinear echo is emitted (stimulated acoustic emission [SAE]/loss of correlation [LOC]) and the microbubbles are destroyed.13 Fundamental color/power Doppler modes and the newer harmonic modes (tissue, pulse/phase inversion) use the microbubbles’ nonlinear and transient scattering properties to enhance signals from the contrast agents over those of background tissue.

Ultrasound contrast agents are indeed very effective in enhancing fundamental spectral/color/power Doppler signals within the macrocirculation of the kidneys. However, blooming of the color/power Doppler signals and shadowing artifacts may obscure enhancement of the blood pool and further degradation may arise from the respiratory and cardiac motion artifacts on the fundamental modes. Adjustment of the color/power Doppler gain counteracts the benefit of using the contrast agents. Fortunately, the use of harmonic modes effectively displays the microbubble signals while suppressing the tissue motion artifacts.

Unlike computed tomography (CT) and magnetic resonance (MR) contrast agents, most ultrasound agents on fundamental gray-scale mode are not depicted in the microcirculation and do not enhance the renal parenchyma at clinical doses as the echo from the tissue is still far too strong compared with that from the small volume of contrast within the microcirculation of the tissue itself. The simplest method of displaying the signals from the microbubbles in the microcirculation, over those of tissue, is to destroy the microbubbles in the microcirculation at high ultra-sound output (above a mechanical index [MI] of 1.0) by using fundamental color/power Doppler modes (SAE/LOC) imaging).14,15 This method emits the strongest signals. Furthermore, Doppler modes are ideal because they are very sensitive. A mosaic of color Doppler signals and color enhancement are displayed on color/power Doppler mode respectively. Gray-scale enhancement is also achieved effectively as a result of the same destructive process, by using the harmonic imaging modes.

However, these fundamental Doppler and tissue-harmonic modes are inherently limited by poorer resolution and lack of penetration. Destruction of the microbubbles results in transience of the effect unless there is replenishment of the new microbubbles in the scan plane. Therefore, only microbubbles which can perfuse the imaging space between frames may be visible. In clinical practice the contrast enhancement is seen only on one frame (the first frame) because scanning is performed at a frame rate at which the interval between frames far exceeds the time for new microbubbles to perfuse the scanning plane. This forms the basis for interval delay imaging, or intermittent imaging. Short or long delay times can also be used to emphasize vascular or tissue contrast, respectively. More importantly, this technique can accentuate the differential perfusion kinetics between normal renal tissue and tumors, which may be used to improve tissue characterization.

This destructive technique is a highly effective method of displaying contrast in the microcirculation, irrespective of whether the microbubbles are in motion or not. But it is limited as it only produces transient displays of contrast and heterogeneous enhancement; transience may be partially resolved by using repeated or higher doses of contrast agents. However, shadowing artifacts from the larger vessels carrying higher concentrations of the contrast agents may be limiting.

Methods such as pulse/phase inversion harmonic imaging have had quite an impact in displaying contrast enhancement of the parenchyma. In pulse inversion imaging, a sequence of two ultrasound pulses is transmitted instead of one single pulse. The first pulse is an in-phase pulse and the second is a mirror image of the first. For any linear target, the response to the second pulse is an inverted copy of the response from the first pulse. These are then summated and all linear echoes are cancelled. However, for a nonlinear target such as microbubbles, the responses to positive and negative pulse, are different and therefore do not cancel each other on summation. The fundamental components of the echo are cancelled whilst the even harmonic components are added, resulting in twice the harmonic level of a single pulse. They allow the use of broader transmit and receive bandwidths with improved resolution and increased sensitivity to contrast, thereby overcoming some of the limitations of the simple harmonic modes.16,17 These advantages also permit the use of a much lower, nondestructive output power level for continuous imaging, thus obviating the need for intermittent/interval delay imaging; at such a low MI, the background tissue appears quite dark and this can to be compensated by increasing the gain setting. More recent improvements now allow adequate visualization of deep-seated lesions (10–15 cm) which were previously problematical.

Another method of displaying contrast agent signals over those of tissue, based on the nonlinear properties of the microbubbles, is known as power modulation. This is a multipulse technique with alteration of the acoustic amplitude of the transmitted pulses. It applies an initial pulse followed by a second pulse which is half the amplitude of the first. Since the reflections from tissues are linear, doubling the half-amplitude reflection results in a signal similar to the full-amplitude signal. Change in the transmit amplitude induces changes in the response of the microbubbles. Upon reception, echoes from the half-amplitude–transmitted pulse are adjusted in amplitude and subtracted from the full-amplitude echoes. This procedure removes most of the linear responses at the fundamental frequency and the remaining echoes contain mainly nonlinear signals from the microbubbles.18,19 Power modulation is used in combination with low-frequency wideband transducers, enabling ultraharmonic imaging, which improves tissue-signal subtraction and, thereby, increases the contrast-to-tissue ratio.

Tags: Ultrasound of the Urogenital System
Jan 14, 2016 | Posted by admin in GENITOURINARY IMAGING | Comments Off on The Native Kidney
Premium Wordpress Themes by UFO Themes
WordPress theme by UFO themes