The uterine anomalies are generated by a defect in the fusion or reabsorption of the Müller conducts, in whatever stage of the embryonary development.
The müllerian anomalies cause infertility and, for this reason, its correct identification is fundamental to determine the best treatment to follow. Due to the fact that normal pregnancies can exist in women with congenital anomalies, uterine malformations are usually only detected in patients with fertility complications; hence the prevalence of reported congenital anomalies in the general population is probably underestimated.
The prevalence of utero-vaginal anomalies is of approximately 1–3 % [1–7] in the general population. Women with anomalies can have difficulty getting pregnant; nevertheless the risk of loss of pregnancy is greater, reaching 3 % [3, 4, 8–13]. Some anomalies can be corrected by hysteroscopy and others by laparoscopic surgery.
The uterine malformations are made clinically evident in different stages depending on the specific characteristics or association with other disorders. In a newborn, it can present itself as a palpable pelvic or abdominal mass due to a vaginal or uterine obstruction associated to intramural fluid.
In a teenager with a menarche lateness or primary amenorrhea, with or without liquid retention in the uterus (hematometra) or in the vagina (hematocolpos), can present itself as a painful intra-abdominal tumor. Some patients suffer from cyclic pains. The anomalies can show various infertility problems, like repeated spontaneous abortions, premature deliveries and intrauterine fetal retardment [14–16].
Once one understands the defect in the embryological development, it is possible to comprehend the potential of associated congenital malformations of other organs [17–20].
Renal malformations which may occur are agenesia or renal ectopia [21]. Less frequent are the osseous –anomalies like abnormal scapula, supernumerary or fused ribs and fusion of the spine (Klippel-Feil syndrome).
Associated cardiac malformations have also been described. The morbidity is increased in certain types in which müllerian obstructions are associated with hemato-salpinx (blood retention in the fallopian tubes) or hematocolpos (blood retention in the vagina).
Once the presence of a congenital anomaly is suspected, it is necessary to carry out diagnostic methods for its confirmation as well as for the determination of the adequate therapeutic procedure.
Twenty-five percent of patients with anomalies have fertility complications [11, 13, 22]. Clinically, primary amenorrhea, premature and repeated spontaneous abortions, and complications in the delivery can be produced [23, 24].
Other malformations of the genitalia, urological (25 %) or rectal can be associated. The renal agenesia is the most frequent of these anomalies, as well as the renal ectopy, the renal cystic dysplasia and the duplication of the collector system.
There exist extra uterine and intrauterine factors like the exposition to the ionizing radiation, intrauterine infections and use of drugs with teratogenic effect such as the thalidomide or the synthetic estrogen utilized in the 70s which is related to defects in the genital development.
The recognition of said anomalies is important to distinguish them from other types of processes, to detect if complications have occurred and plan the adequate therapeutic procedure for the patients suffering from sterility. The uterine malformations must be suspected according to the clinical history and the physical exam.

The knowledge of the embryology of the female urogenital tract is fundamental to understand the pathogenia of the different types of anomalies.
The female reproductive system is developed from two Müller conducts (paramesonpheric conducts) that begin in the mesoderm lateral to each Wolf conduct (mesonpheric conduct). The pair of Müller conducts develops in a medial and caudal direction. The cranial section remains not fused and forms the Fallopian tubes. The caudal part fuses and forms the uterus and two-thirds of the top of the vagina. This is known as lateral fusion. Another known process is the vertical fusion where the medial septum and both conducts regress. The caudal part of the vagina comes from the sinovaginal bulb and fuses with the inferior Müller ducts.
The ovaries originate from the gonad bridge, a tissue completely different from the mesoderm that gives rise to the genital and urinary systems. For this reason, congenital gynecological and renal anomalies can be associated.
The uterine anomalies are classified in agenesia and hypoplasia, vertical and lateral fusion defects [25, 26]. In 1979, Buttram and Gibbons proposed a classification of anomalies of the müllerian ducts based on the degree of failure of the normal development, and they separated them in classes according to their similar clinical manifestation, treatment and prognosis [27]. This classification was modified by the American Fertility Society and nowadays is universally accepted (Table 8.1).

Frequently, after the diagnostic suspicion of a malformation, an evaluation is necessary, with the aim of determining the exact diagnosis of the pathology, for which case exists a variety of different imaging methods such as hysterosalpingography (HSG), ultrasound, magnetic resonance (MR) and a recently new method known as Virtual Hysterosalpingography (VHSG).
HSG is a diagnostic modality which allows the evaluation of congenital anomalies. However, it has several limitations. In certain anomalies, knowledge of the morphology is required, not only of the uterine cavity, but also of the myometrial wall. This technique does not offer information on the uterine wall, reason why in certain cases it relies on measurements to estimate, with certain precision, what malformation it could be. These measurements are not always accurate [28].
Ultrasound is a method that permits the transvaginal or pelvic evaluation of congenital anomalies. However, to assess with more precision the morphology of the myometrial wall, the tridimensional technique is the one which offers better information [29, 30].
MR has been considered the reference method for the evaluation of uterine anomalies due to its great capacity in tissular resolution and in optimally detecting the external margins of the uterine wall [31–33]. Due to its high contrast resolution and use of multiple sagittal planes, coronal and axial in T1, T2 sequences with or without fat saturation, it is able to identify diverse uterine anomalies. The slice width that the MR uses does not allow the exact detection of associated intramural pathologies or the assessment of the tubal morphology and permeability. MR characterizes the uterine anomaly but, to discard other associated factors possibly related to infertility, other complementary methods are required.
There is now a new and very useful method to assess the gynecological apparatus as a whole, the Virtual Histerosalpingography study. It offers information on the cervical and uterine regions, of the tubes and the anexial region with only 1.5 s in the acquisition of the images, using an extremely low dose of radiation (0.3 mSv) and with a reduced rate of complications due to its non invasiveness [34–41].

Agenesia of the Müllerian Conducts

This anomaly consists of segmental agenesia and variable degrees of uterovaginal hypoplasia.
VHSG permits the evaluation of this type of alteration, offering integral 2D and 3D information. In Fig. 8.1, a hypoplastic uterus is shown, characterized for being of small size. 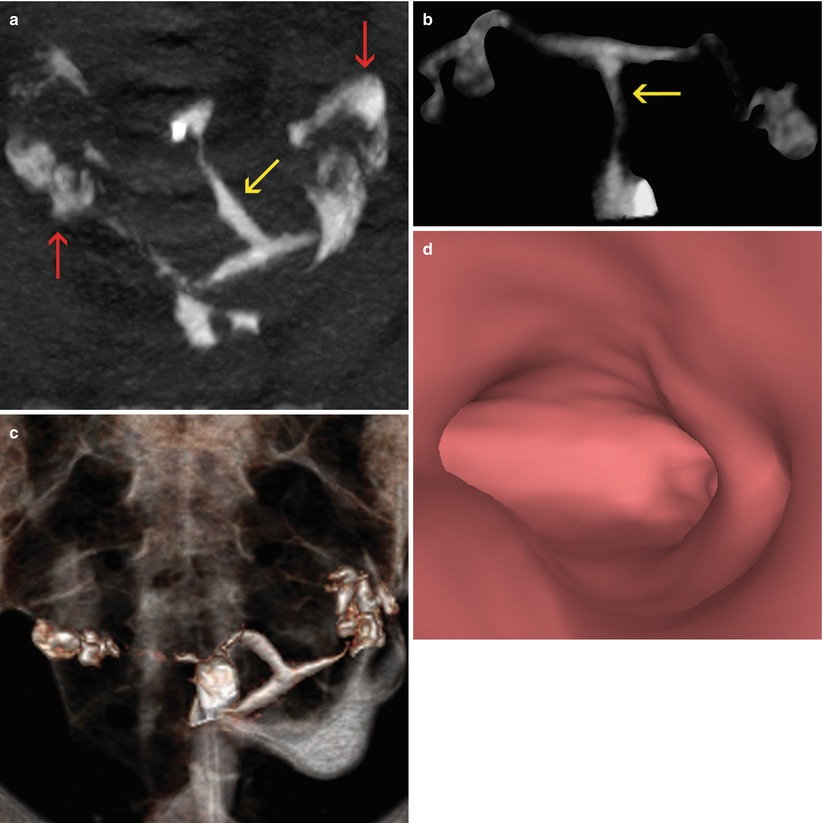 In this anomaly, a failure of one müllerian conduct exists, while the other develops normally, resulting in a unicornuate uterus. It presents itself in 20 % of uterine malformation cases; being able to be only one or to present a rudimentary horn with no association to the endometrium in 33 % of the cases.
A rudimentary horn can be communicative if there is communication of the endometrium with the contra-lateral horn (10 %), or not communicative if no such communication exists (22 %) (Fig. 8.2). 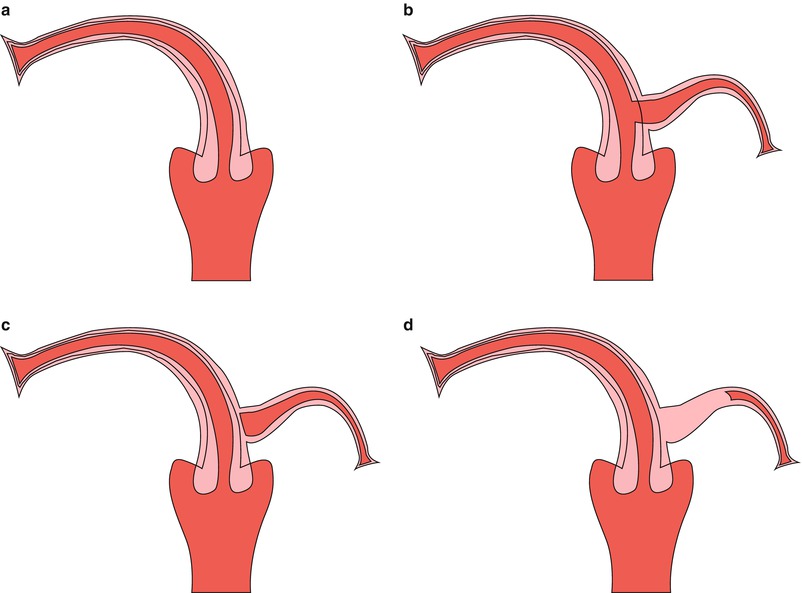 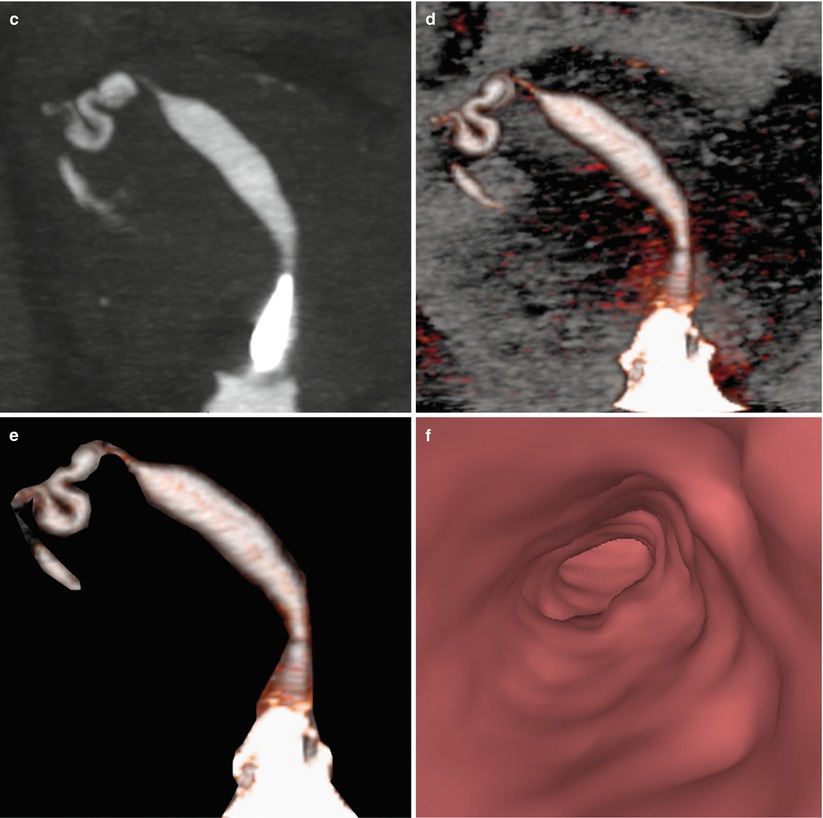 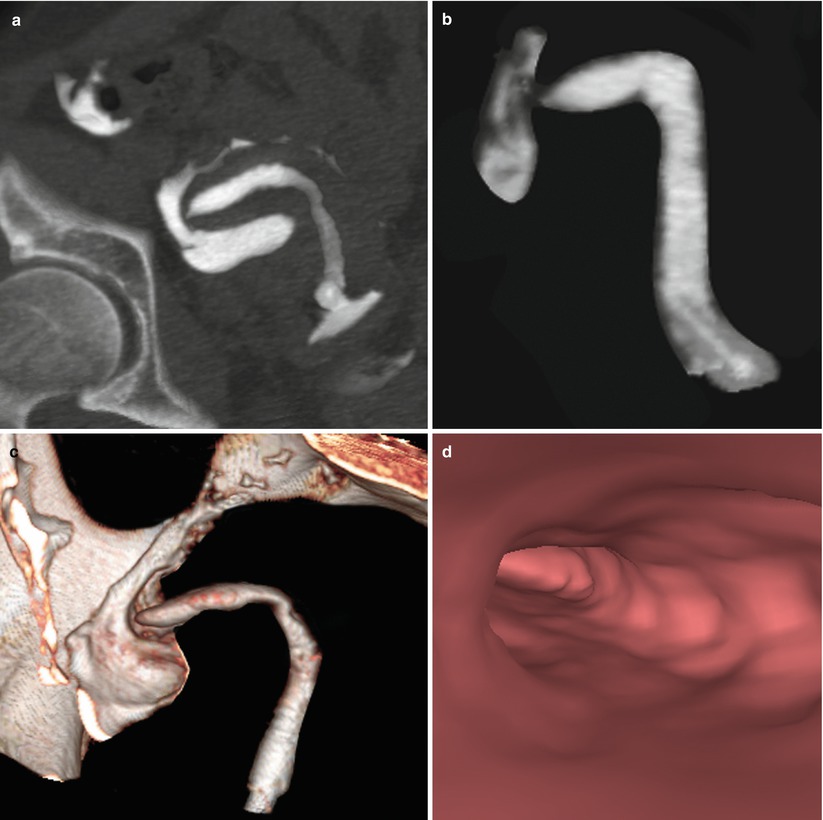 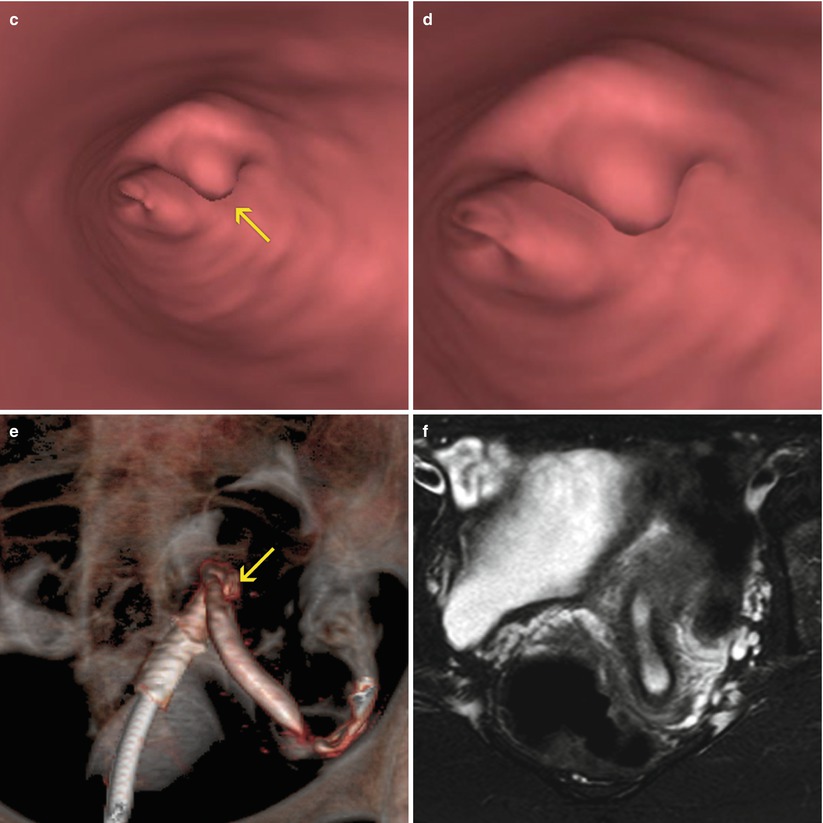 Unicornuate uterus with cervical polyp. (a) Axial CT image with soft tissue window showing an elevated endocervical lesion of 2.5 × 3.0 mm compatible with a polyp. (b) Oblique coronal maximum intensity projection image of a unicornuate uterus. A small filling defect is observed in the cervical canal (arrow). (c) Virtual endoscopy image which exhibits the polyp (arrow). (d) Magnified virtual endoscopy view. (e) Coronal 3D volume rendering image. (f) Axial T2 weighted MRI image with fat suppression showing a unicornuate uterus. The polyp was not able to be identified
The treatment of this anomaly consists in the resection of the non communicative rudimentary horn to avoid the possibility of ectopic pregnancies. Associated renal anomalies are observed frequently in 40 % of these patients. This alteration is usually ipsilateral to the rudimentary horn.

Results from the incomplete fusion of the müllerian ducts and accounts for 5 % of the anomalies. An almost complete fusion failure exists between the endometrial cavities with a lack of communication between both horns (Fig. 8.6). 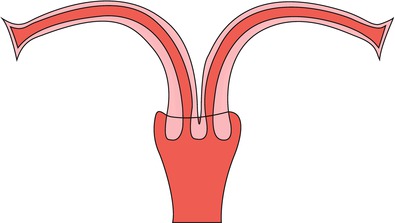 Picture of a uterus didelphys
As each müllerian duct develops its own hemiuterus and cervix, no communication exists between the endometrial cavities. In 75 % of the cases an associated vaginal septum is observed that, at the same time, can complicate itself with a hematometrocolpos.
The non obstructive uterus didelphys is usually asymptomatic, while the ones that present unilateral vaginal obstruction manifest dysmenorrhea. This anomaly is associated with a percentage of spontaneous abortions that oscillates between 32 and 52 % and with premature deliveries in between 20 and 48 %.
As diagnostic methods, HSG, MR and VHSG allow its evaluation, showing the typical findings mentioned of this anomaly.
In Fig. 8.7, a comparative case of the three modalities is shown. It is possible to observe the advantages of VHSG thanks to multiple post-processing techniques such as bidimensional, tridimensional and endoscopic reprocessing. 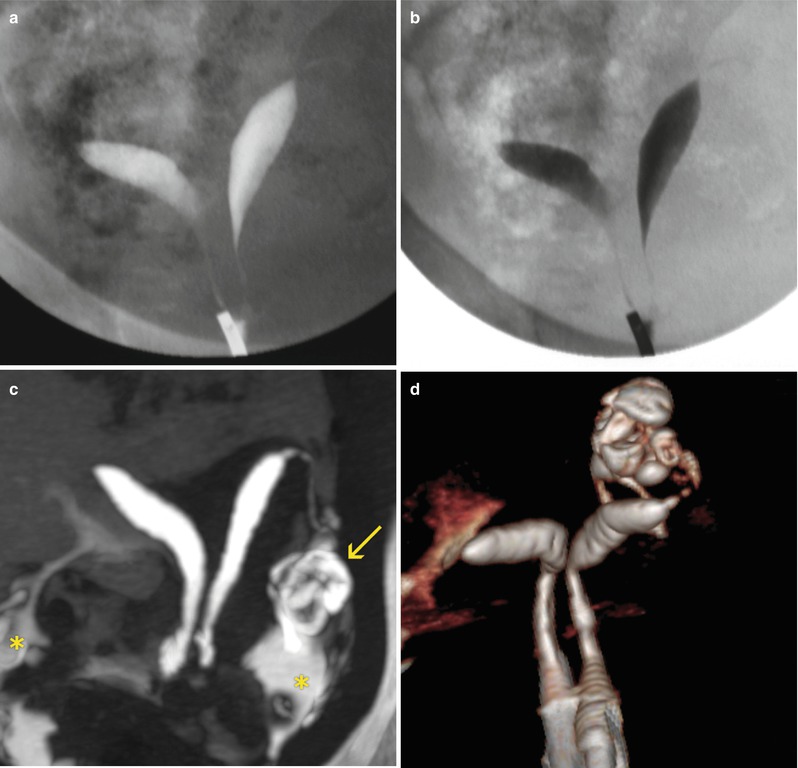 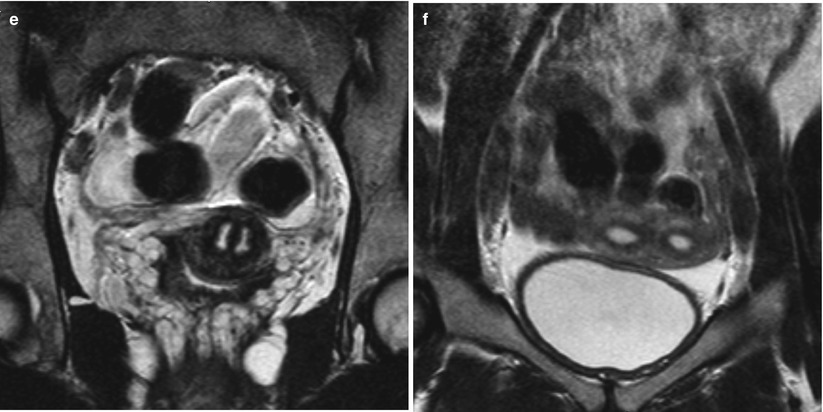 Uterus didelphys. Comparison between HSG, MRI and VHSG. (a, b) HSG showing a uterus didelphys. Two independent uterine cavities with no communication between them can be observed. (c) VHSG: axial maximum intensity projection image of a uterus didelphys. Two non-connected uterine hemicavities can be observed. Each one possesses a normal Fallopian tube (arrow) with passage of contrast to the peritoneal cavity (asterisk). (d) VHSG: Coronal 3D volume rendering image illustrating the morphology of a uterus didelphys. (e, f) Coronal T2 weighted MRI images showing two uterine hemicavities extending from the cervical region to the uterine body
In Fig. 8.8 didelfos uterus with associated polypoid pathology and normal MR is shown. 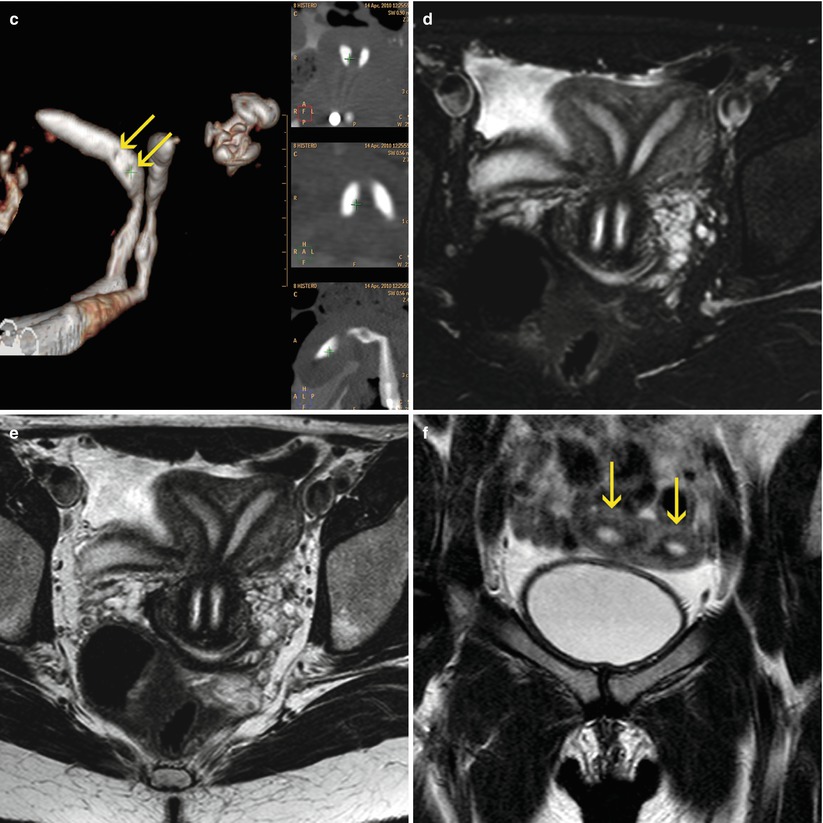 This anomaly consists of two independent uterine horns that caudally join with communication of the endometrial cavities, frequently at the isthmic-cervical level.
In this anomaly, an incomplete fusion of the upper segments of the utero-vaginal canal is observed. This case constitutes 10 % of the anomalies.
The bicornuate uterus can be of different types: partial, complete or arcuate (Fig. 8.9).

Ultrasound of bicornuate uterus. (a) Image showing the typical indentation at the level of the uterine fundus. (b) Transverse image showing both endometrial cavities
HSG: The uterine horns are well separated with an inter-cornual angle equal or more than 105° (Fig. 8.11). Each horn is fusiform and ends in each one’s respective Fallopian tube (Fig. 8.12). 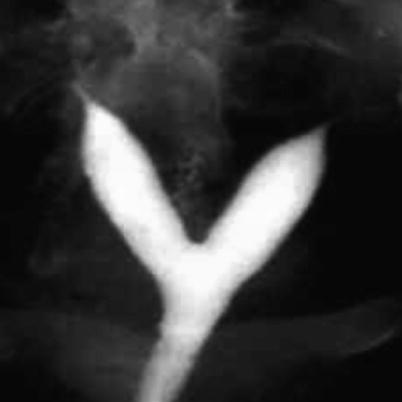 HSG of bicornuate uterus. The separation of both uterine horns is > 105°, typical of this uterine anomaly
Only gold members can continue reading. Log In or Register to continue