The Birth of a New Diagnostic Technique

Twelve years ago, in an imaging diagnosis center in Vicente López, a northern area of Greater Buenos Aires, the idea of investigating the uterine cavity and fallopian tubes using a computed tomography (CT) based technique similar to the one of the traditional X-ray hysterosalpingography (HSG) arose: it was the early days of the virtual hysterosalpingography (VHSG).
In this chapter, the first steps of the technique and its changes and growth over the years and hand of technological advances will be described, as well as the beginning of its clinical application, until becoming the everyday method known today.
For this purpose, this chapter is divided into five stages:

VHSG appears in early 1998. In those times, all virtual CT studies were, fundamentally, exams utilized for the evaluation of the colon. Virtual colonoscopy, also called CT Colonography, was born by the hand of Dr. Vining [1] in 1994 and soon other clinical applications were explored like virtual bronchoscopy, virtual gastroscopy, virtual ureteroscopy and cystoscopy, among other studies [2–5]. Nevertheless, applications for the evaluation of the gynecologic apparatus hadn’t yet been developed. It is for this reason that the study of the cervix, uterus and tubes through CT generated a new expectation.
The CT units used in those times were spiral CT scanners which allowed volumetric image acquisitions. Nevertheless, due to the fact that these CT units were not fast (tube rotation times of 1 s), the image acquisition was long and still had thick cuts (4 mm), which did not permit detecting small lesions. Also, the acquisition of isotropic images without loss of resolution in the different planes of space was not feasible. In spite of these limitations, the Diagnóstico Maipú research team carried out an investigational protocol to verify how far the acquisition of information of the feminine genital apparatus utilizing the available CT equipment and virtual CT algorithms was possible. The results obtained through conventional X-ray HSG, radiologic study of preference to evaluate the gynecologic apparatus, were compared with the first attempts at HSG via CT, which was denominated VHSG (virtual hysterosalpingography). The CT unit used was a single-slice CT scanner (Picker, model PQ5000). The technique employed in the initial stage of the VHSG was similar to that used in X-ray HSG studies. With the patient on the CT table in gynecologic position, with prior asepsis cleansing of the perineum, a speculum is placed to distend the vaginal cavity. After that, asepsis of the cervical canal is carried out and the cervical neck is clamped, placing then a metallic cannula into the external cervical canal through which pure iodine contrast media is instilled to distend the uterine cavity (Fig. 2.1). Following this description, the procedure is practically the same as the X-ray HSG examination; hence the patient discomfort is the equal. The only advantage of the CT virtual study in this first stage is that the patient was not required to move during the image acquisition, as was necessary in the traditional radiologic exam. Moreover, the total time of the new procedure was significantly shorter (15 min versus 30 min). The CT image acquisition lasted approximately 45 s, with a slice thickness of 4 mm. The prolonged scanning length and the thick 4 mm slices did not allow evaluation of the Fallopian tubes; nevertheless a visualization of the endometrial cavity was possible. This achievement generated great enthusiasm among researchers due to the fact that this new modality made possible the evaluation of the uterine pathology from different angles using 2D or 3D images and virtual endoscopic views (Fig. 2.2). In this way, the VHSG had, although few, some more advantages for the patient in terms of the execution of the study; it permitted a complete evaluation of the uterine cavity providing precise information and facilitated a more accurate diagnostic result. Nevertheless, the primary limitation was the impossibility of evaluating the Fallopian tubes. For this reason, the VHSG was not yet able to compete with the traditional X-ray exam that granted a complete view of the gynecologic apparatus. The first results of the VHSG experience were shown in the 21st International Radiology Congress which took place in Argentina in September 2000. 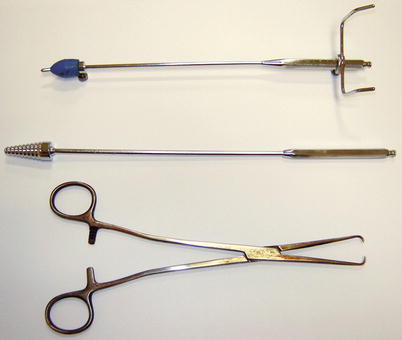 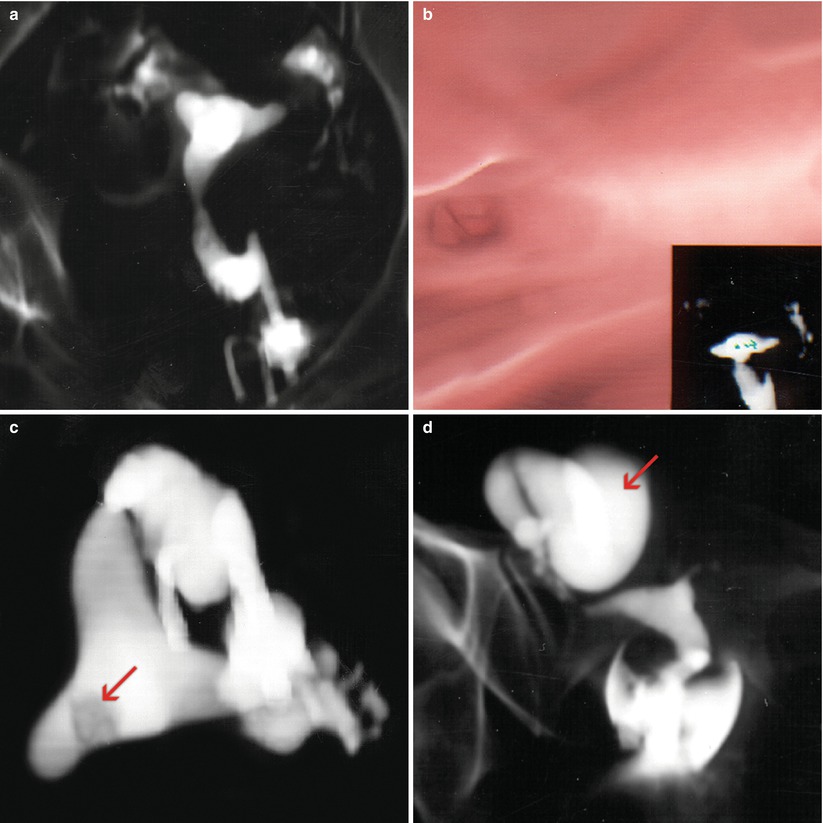 As of November 1999 it was possible with the incorporation of a 4-slice CT scanner (the first in the country), to make certain changes in the CT acquisition parameters and have new and better reprocessing tools, which had great impact on the VHSG procedure’s final result. This new CT scanner (Picker-Marconi; Mx8000), was much faster than the CT units used until that moment. This new CT scanner had a rotation time of 0.5 s (double the speed of the spiral CT scanner) and offered 8 images per second. This improvement in the CT acquisition time allowed the VHSG to be performed in a shorter scan time of 25 s (average). At the same time, the slice thickness was reduced to 2 mm, hence the space resolution was enhanced and endocavitary lesions of scarce millimeters began to be detected. The images obtained were isotropic, which means they were constituted by cubic voxels, which avoids the loss of resolution when changing position in multiplanar reformats, tridimensional images or endoscopic views. The uterine cavity could be visualized better, but the Fallopian tubes still could not be opacified and visualized correctly in most studies (Figs. 2.3 and 2.4). For this reason the changes and improvements failed to achieve a breakthrough in the performance of the procedure [6]. 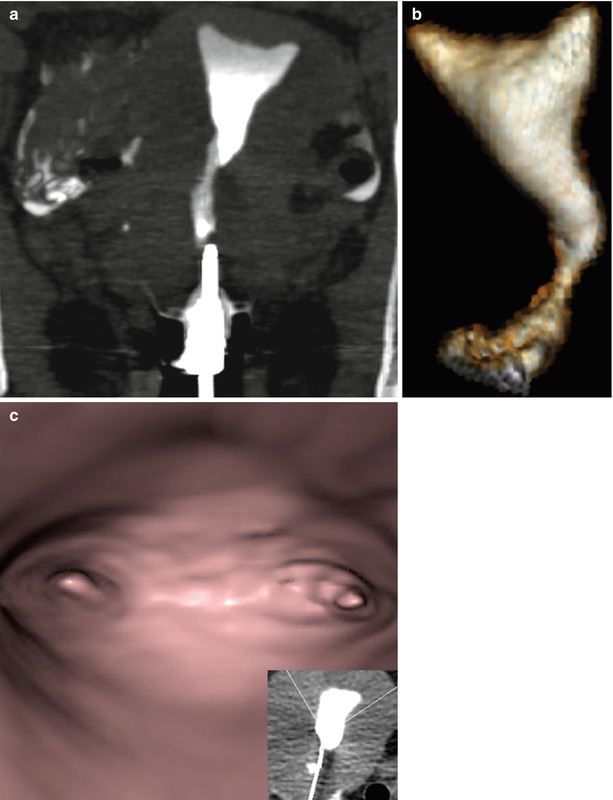 Only in the year 2004, with the incorporation of a 16-slice CT scanner, significant improvements in VHSG studies could be achieved. These CT scanners had a rotation time similar to the 4-slice CT units (0.4 s), but thanks to a greater number of detector rows, they offered up to 40 images per second. Hence the studies could be acquired in only 12 s. In addition, improvements in space resolution with 1 mm slice thickness generated the possibility of a better evaluation of the Fallopian tubes, very limited until then. During this stage, research studies were carried out comparing the VHSG and the X-ray HSG in the evaluation of the uterine pathology and the Fallopian tubes. It was concluded from these studies that the VHSG correctly evaluated the cervical canal and uterine cavity pathology in the totality of the patients. However, only in 50 % of the cases, the visualization and evaluation of the Fallopian tubes were feasible. Despite the substantial improvements achieved by the VHSG technique, it wasn’t enough to compete with the X-ray HSG because in a large percentage of patients, Fallopian tube assessment could not be achieved [7, 8].
Simultaneously, another improvement was developed, the use of iodine-containing, nonionic, hypo-osmolar contrast media. Given its viscosity, these contrast media generated less discomfort in patients when distending the uterine cavity, and even more so in its passage to the peritoneal cavity. Afterwards, this type of iodine contrast agents began to be used diluted in saline solution, due to the fact that the density of the pure iodine contrast instilled in the cervix, uterus and tubes was high and, in certain cases, produced image artifacts which made impossible a precise view and diagnosis of endoluminal pathology. These contrast media dilutions allowed clear improvements in the image quality. During this stage, the physicians and technologist who performed the procedure remained in the CT room during the image acquisition to instill the contrast media into the uterine cavity, which was done manually.
Only gold members can continue reading. Log In or Register to continue