The cervical abnormalities, that can be evaluated using virtual hysterosalpingography (VHSG), include diverse types of pathologies such as changes in the cervical diameter, dilatation or stenosis, sinechiae and parietal irregularities with thick folds, polipoyd lesions, diverticules and cesarean scars. All of them constitute benign pathologies. The malignant pathology, as the cervical cancer is, can be detected by VHSG only in advanced stages, and its role is limited [1–5].
Next are described each of the diverse cervical pathologies, including typical images of them through VHSG as well as other complementary diagnostic methods.

The reduced caliber of the cervix can be a pathological finding, although in certain cases it is just a normal variant.
The causes of pathological cervical stenosis are related to post-surgery synechiae or post-infection causes.
The caliber of the cervix can be reduced focally or diffusely, which can generate changes in patients that require insemination treatments.
The cervix is difficult to evaluate because of the different diagnostic modalities, especially in HSG studies due to its location, angle and superposition with the uterus-cervical region in situations of insufficient traction [6–8] (Fig. 5.1).

HSG study. (a, b) Oblique X-ray projections showing partial superposition of the cervix with the proximal sector of the uterine body due to insufficient traction, not allowing a correct evaluation of all of the gynecologic apparatus
VHSG does not require traction because it post-processes the information with 2D and 3D reconstructions and, in this way, permits the evaluation of the cervix without blind spots. VHSG has the ability to angle the gynecologic apparatus in any direction and permits its evaluation from any view (Fig. 5.2) [9, 10]. 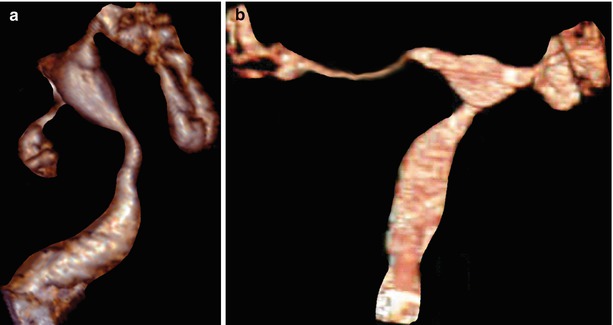 VHSG study of normal cervix. (a, b) 3D volume rendering images that show the cervix from different angles which allow its correct evaluation without the need for traction
Maximum intensity projection (MIP) and volume rendering (VR) multiplanar reconstructions are useful in the detection of cervical stenosis. Virtual images complement the diagnosis (Fig. 5.3) [11, 12]. 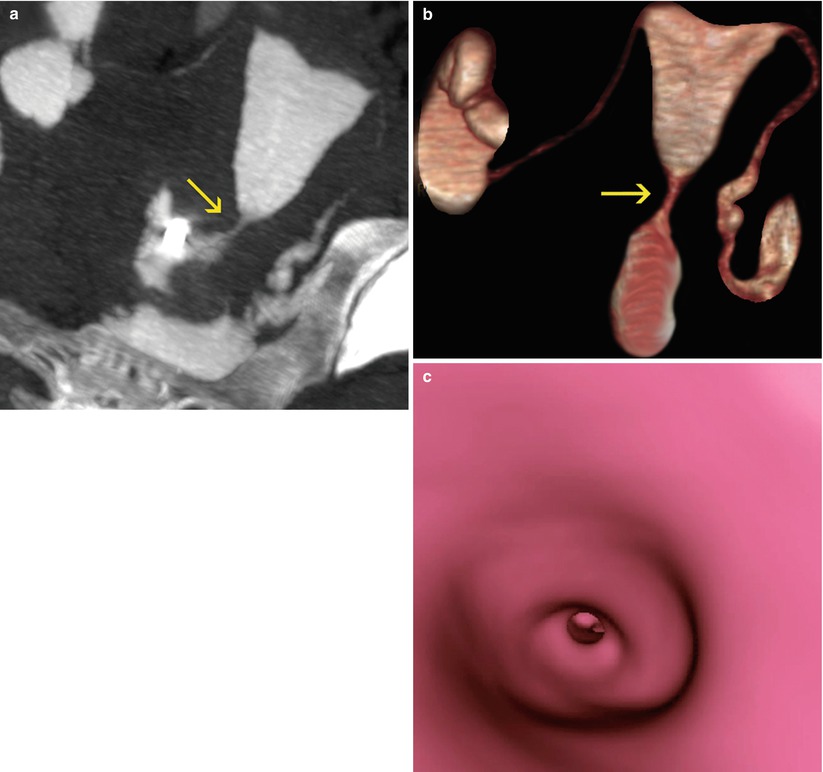 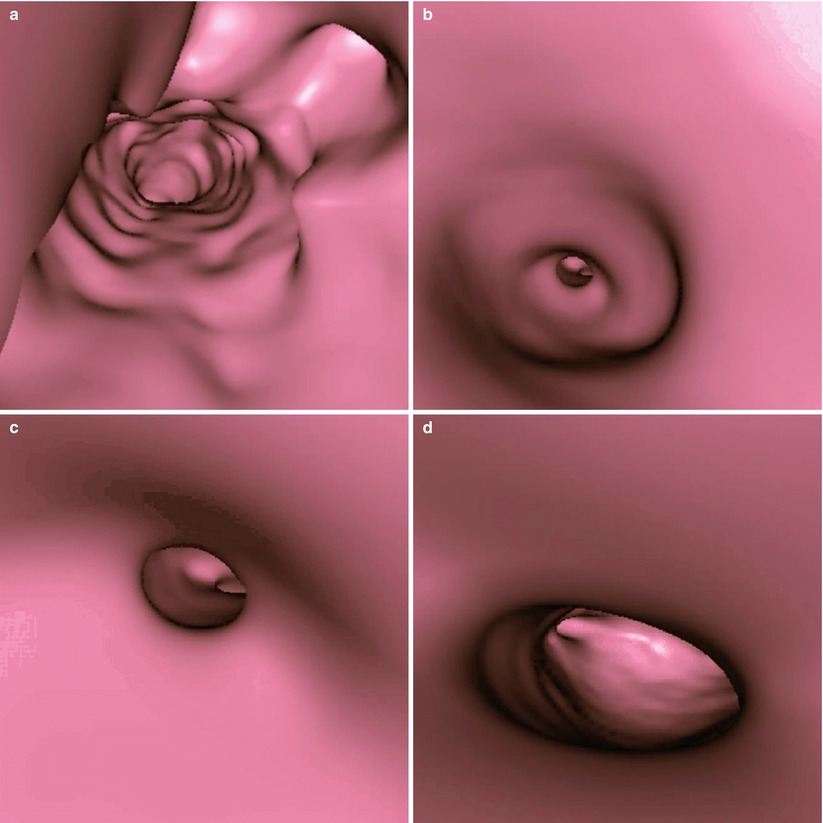 The cervical adherences are fibrous tissue bands located in the interior of the cervix and thus generating partial or total obliteration of its lumen. They extend from the walls to the center of the cervical lumen.
Methods which detect cervical synechiae are HSG and VHSG.
HSG: shows focal or diffuse lumen filling defects in the cervix (Fig. 5.5). The progressive filling of the cervix with contrast is essential so as not to have false negatives, because the small lesions may not be correctly detected [13–15].

Cervical synechiae in HSG study. (a, b) Anterioposterior projections with progressive injection of contrast showing filling defects at the level of the cervical lumen compatible with synechiae (arrows). Note that the cannulas have been changed to avoid contrast reflux
VHSG: can easily see this pathology [16–18]. It identifies endocervical lesions with soft tissue density, of irregular edges, that extend from the cervical wall to the centre of the cervix or else connect the cervical walls, in this way reducing the diameter (Fig. 5.6). 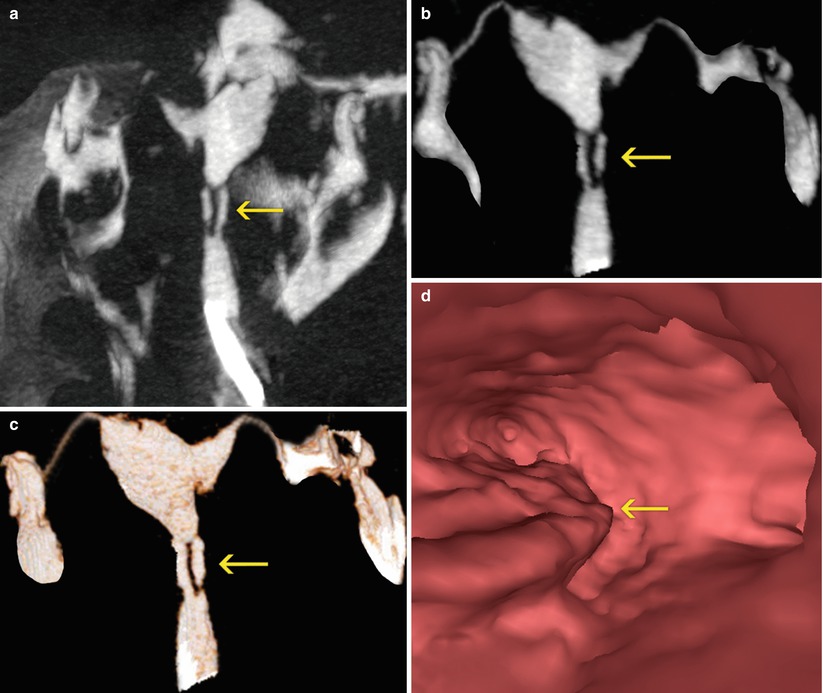 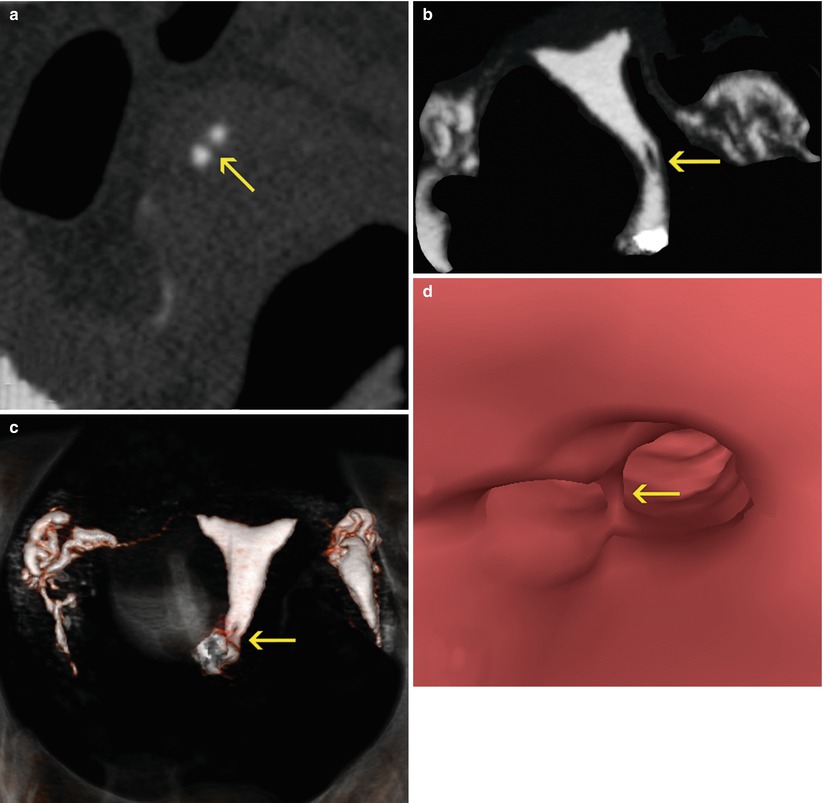 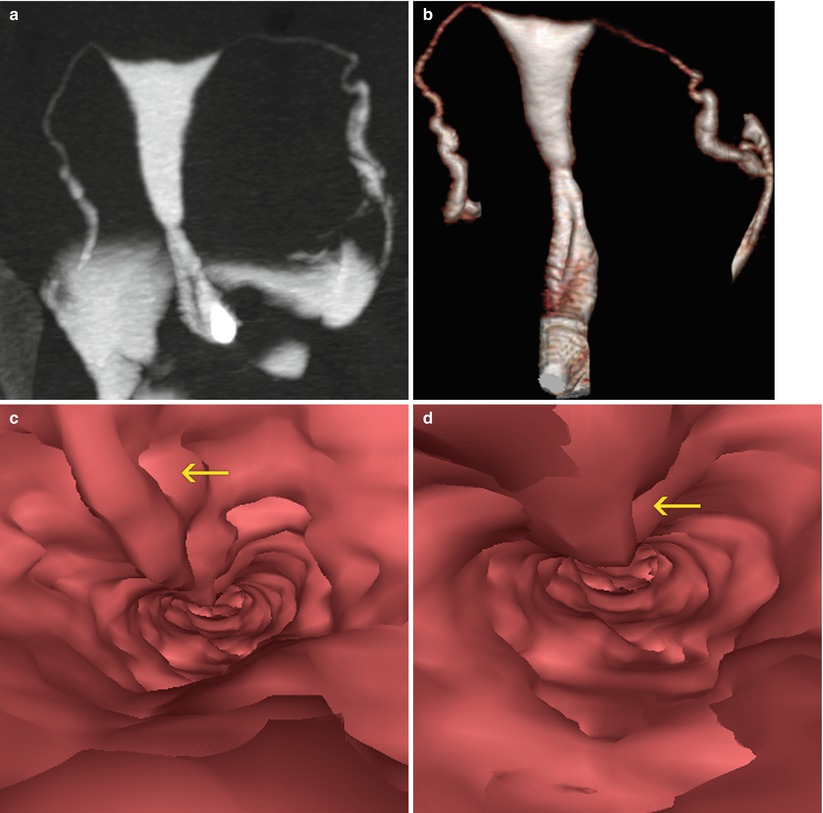 Polyps are elevated lesions which are found with frequency in women older than 20 years old who have had children. It is rare in young women who have not begun menstruating.
Polyps can be single or multiple. Most patients present only one polyp. They have smooth edges and variable size.
These lesions appear as a natural response to the increase in estrogen levels, to chronic inflammation or to obstruction of the blood vessels of the uterine neck. They can be asymptomatic or produce symptoms such as:

Most of the polyps are benign and easy to remove although in a low percentage of cases can become malignant. It is for this reason that they should be analyzed.
Methods that achieve the capacity to diagnose them are HSG and VHSG.
HSG: permits the identification of filling defect lesions, if they have a considerable size [19, 20] (Fig. 5.10). These lesions are more difficult to detect if they are small.

(a, b) HSG with cervical stalked polyp. The head of the polyp projects towards the cervical isthmic region
VHSG: exhibits the polypoid lesion as an elevated tissue that projects into the cervix lumen [4, 5, 13]. The smaller ones reduce partially the cervical cavity (Fig. 5.11) while the larger ones obliterate it completely (Fig. 5.12). 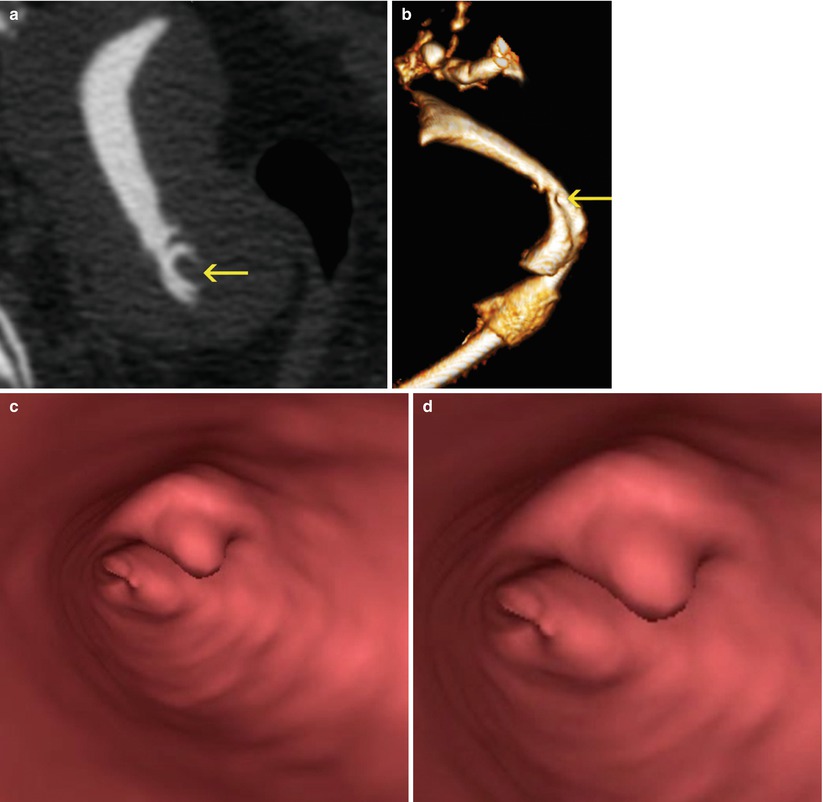 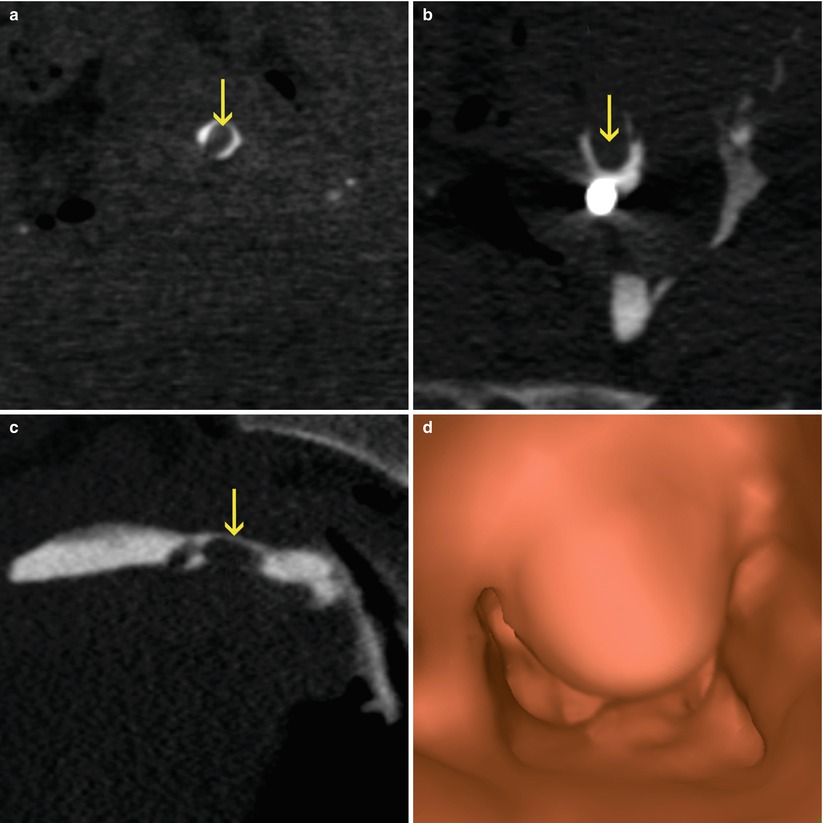 (a–c) Coronal, axial and sagittal CT images which show a big cervical polyp that significantly obstructs the lumen (arrows). (d) Virtual endoscopy image
Multiplanar reconstructions show the densitometry of the polyps (soft tissue). Measurements of polyps size has to be done on them as they provide the most accurate information (Fig. 5.13). 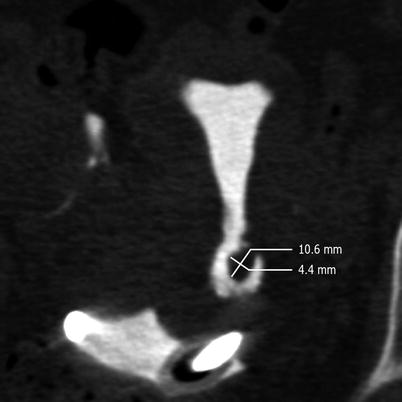 Polyp measurements in multiplanar reconstruction image. An elevated lesion at the level of the lateral wall in the distal cervical region is observed. The transverse and anteroposterior diameters are displayed
VR reconstructions are also very valuable as they display the filling defect in the location of the polyp.
Endoscopic images exhibit the endoluminal view of the polyp.

Diverticles constitute herniations of the cervix wall that project on any of its walls. They do not represent an important finding.
Herniations can be detected by HSG and VHSG [1–3].
HSG: shows the focal dilatation in a cervical wall with defined edges (Fig. 5.14). 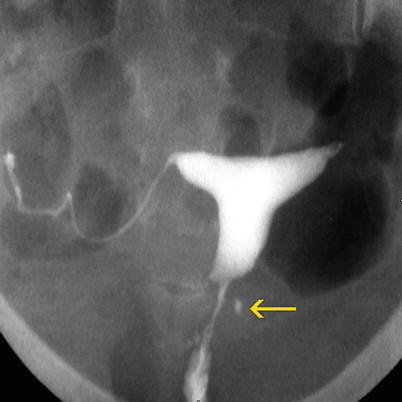 Diverticulum seen on HSG exam. A diverticulum is observed on the left lateral wall of the cervix (arrow)
VHSG: identifies similar findings to those found in HSG, with the advantage of providing tridimensional and endoscopic images which can detect the neck of the diverticule intra-luminally (Fig. 5.15). 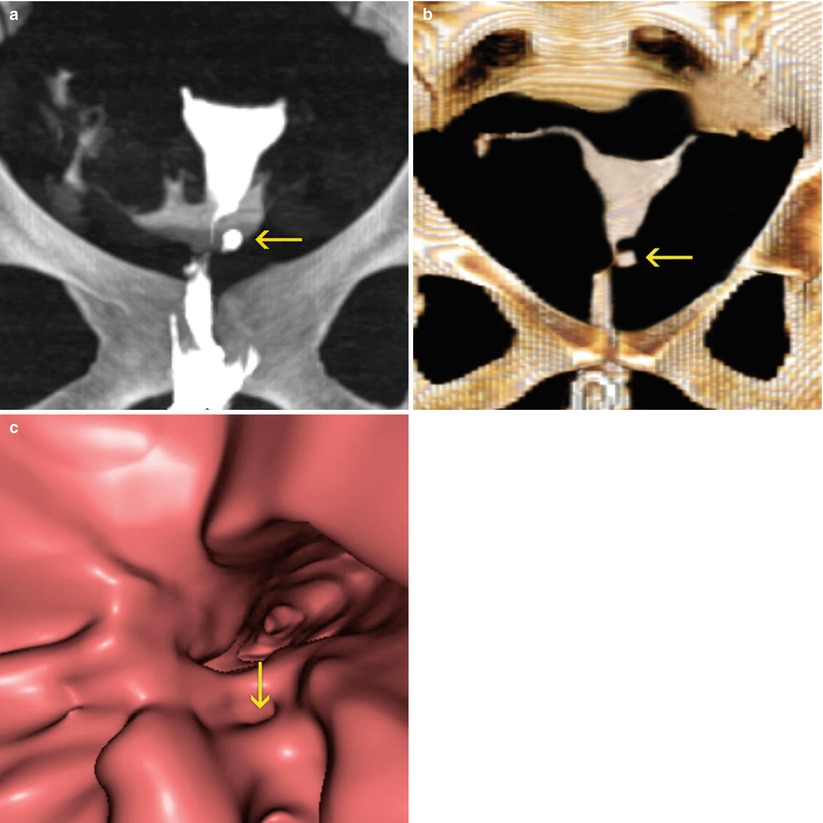 The cesarean scar is located in the isthmic-cervical region and in most of the cases produces an irregularity in the scar section with dilatations of diverse sizes and thinning in the wall at that level (Fig. 5.16). These findings are correctly observed on the sagittal images in the multiplanar reconstruction where one can measure the width of the cervical wall in the site of the scar. VR reconstructions display the post-surgery dilatations and offer volumetric information [1–5]. 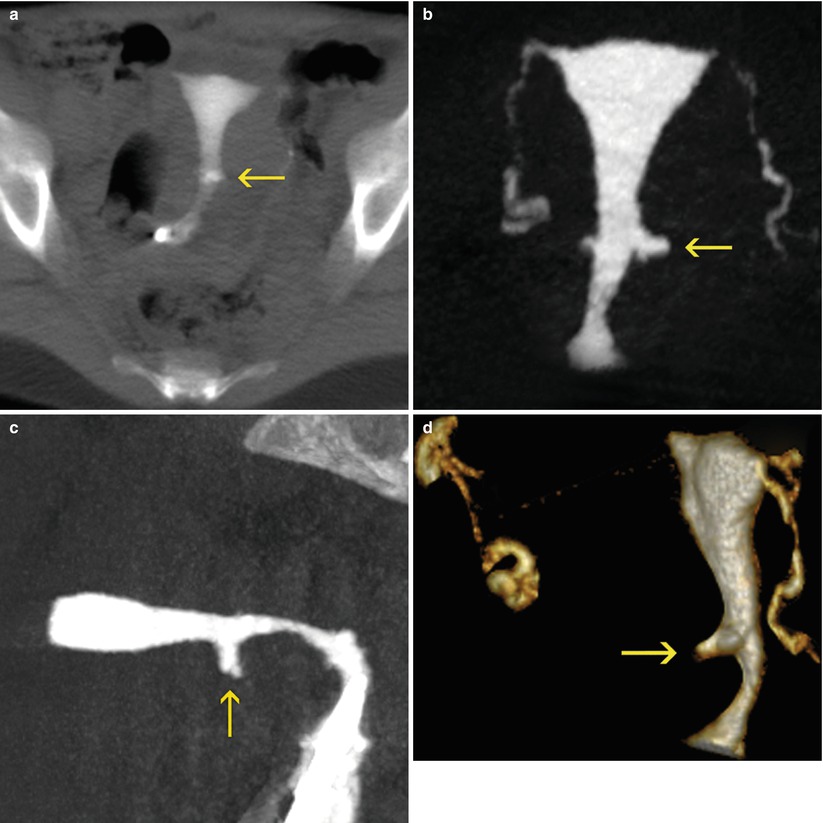 Cesarean scar seen on VHSG exam. (a) 10-mm multiplanar reconstruction image which shows a sector of dilatation in the isthmic-cervical region (arrow). (b) Coronal maximum intensity projection (MIP) image which better displays the dilatation (arrow). (c) Sagittal MIP image is exhibited in the sector of dilatation towards the anterior wall (arrow). (d) Oblique sagittal 3D volume rendering image which shows similar findings (arrow)
The information obtained about the width of the wall, as well as the volume of the dilatation could provide useful information to the gynecologist in terms to greater or less risk of complications in future pregnancies.

Cervical cancer constitutes the 4 % of malign diseases and is the eight cancer in frequency in developed countries. It is the gynecological cancer most frequent in women under 50 years of age and the third cause of gynecological tumor in post-menopausal women after the endometrial and ovary cancer.
Approximately 500,000 women are diagnosed with cervical cancer per year worldwide, and 350,000 of them die.
The distribution shows a peak between the ages of 35 and 45, and a second peak between 60 and 64 years old. The incidence of cervical cancer has been reduced by a 75 % due to the development of cytological screening programs [21, 22]. The precursor conditions are more frequent in women between the ages of 30 and 40 than invasive cancer. The precursor lesions gradually progress to invasive disease in a period of 10 years [23]. The invasive cervical cancer that occurs before the 35 years of age is typically of a malignant variety. The survival in United States at 5 years is of 70 % and at 10 years of 65 % [24, 25].
The principal cause of cervical cancer is the infection of the epithelium by an oncogenic virus denominated Human Papilloma Virus (HPV). The high risk types include HPV 16, HPV 18, HPV 31, HPV 33, HPV 45, among others. Around three quarters of all uterine neck cancers are caused by HPV 16 and 18 [26–30]. The prevalence of infections by HPV is of 5–20 %, with a peak between 20 and 25 years. Spontaneous regression is frequent However, if the virus is persistent, it associates to epithelium changes in the cervical mucosa, especially in women with other associated risk factors like multiple sexual partners, frequent genital infections, immunosuppression and prolonged use of oral contraceptives [31–33]. Other factors that may influence are the cigarette, vitamin deficiencies and genetic predisposition.
The cervical squamous cancer develops over various stages, from the epithelium proliferation, epithelial changes, dysplasia, to definitive epithelium changes with precancerous lesions. Precancerous stages refer to a cervical intra-epithelial neoplasia (CIN) [34] or a scaly intra-epithelial lesion (SIL) which finally progress to an in situ carcinoma before transforming into an invasive cancer. The early stages of CIN can be observed in women halfway through their second decade. With frequency there are resolved spontaneously but may progress to in situ cancer, between the ages of 25 and 35 and, finally, to cervical cancer.
Early types of cancer do not present symptoms. In more advanced stages vaginal bleeding or pain can be observed after sexual intercourse. In very advanced stages, when the cancer has spread to adjacent structures, it can produce diffuse pelvic pain and pain in the lumbar region, extended to the legs. In cases in which the lymphatic drainage is compromised, a unilateral edema of the leg with increase of the abdominal circumference can be produced. The general symptoms in advanced stages consist in asthenia and loss of weight.
Histologically, 80 % are keratinizing or non keratinizing squamous carcinomas. The second tumor in frequency is the adenocarcinoma in 15 % [35]. Its incidence has increased during the last 5 years. It is associated with chronic cervicitis and estrogens taking The II and III stages of the adenocarcinoma are more disfavorable than the squamous carcinoma [36]. Three percent of the adenocarcinomas have a highly differentiated histological mucinous subtype.
The malignant adenoma, which is actually an adenocarcinoma, has a poor prognosis due to the fact it extends to the abdominal cavity and has an insufficient response to chemotherapy or radiotherapy [37, 38]. It is associated with the Peutz-Jeghers syndrome which is characterized by pigmentation of the skin and mucosa, multiple hamartomas of the gastrointestinal tract and ovary tumors [39].
Other cervical tumors are the neuroendocrine, the adenosquamous tumor and the rhabdomyosarcoma.
The factors which define the prognosis of uterine neck cancer are (i) the tumor size, (ii) the extension of the myocervical invasion (more than half of the myocervical width), (iii) the parametrium invasion, (iv) the extension of the pelvic wall, (v) the affectation of the lymph nodes and (vi) distant metastases [1].
The International Federation of Gynecology and Obstetrics (IFGO) establishes stages of the disease, according to the classification system on which is based the treatment. The correct evaluation of each of these phases is decisive for the therapeutic treatment.
The TNM system of the American Joint Committee on Cancer (AJCC) has been integrated into the accepted stages by the IFGO including the physical exam and imaging diagnosis data [40].
The report of imaging studies must include: (i) tumor size, (ii) depth of the myocervical invasion, (iii) degree of extension of the parametrium invasion (lateral and uterosac parametriums), reporting if it reaches the pelvic wall, (iv) vaginal infiltration, (v) evaluation of pelvic and/or lymphatic nodes from the obturatriz pit, (vi) infiltration of vesical-cervical-vaginal space and/or rectum-vaginal space and (vii) distant metastases.
The definition of TNM and the grouping of the stages have been updated in the 7th edition, reflecting the new staging adopted by the IFGO, which no longer reckons the stage 0 (Tis). Furthermore, the visible macroscopic lesions, even with superficial invasion, are considered like T1b/IB [40].
In Tables 5.1, 5.2, 5.3 and 5.4, the updated and united system for uterine neck cancer is shown.

Stages of uterine neck cancer according to the unified criteria of the AJCC and FIGO. Primary tumor (T)