The uterus plays a primordial role in the transport of spermatozoids. In the evaluation of the infertile patient, the uterine pathology does not occupy a principal place. As a unique factor, the uterine disorders represent only 5 % of the causes of infertility; nevertheless it can be linked to other alterations and represent an important cause in patients with frequent abortions.
In the present, however, the influence of the uterine factor is increasing. The maternity at a later age is associated in the nullipara woman with a tendency to develop pathology in the wall of the uterus, in particular with the apparition of myomas. This does not influence only natural conception. The uterus has a fundamental role in the success of different techniques of assisted reproduction, in which the process of the implantation of the embryo in the endometrium is the event that limits the success of the procedure [1]. The mechanisms involved are not completely determined; a chronic inflammation of the endometrium, alteration in the vascularization, an increase in the uterine contraction and local endocrine alterations are causes that may potentially interfere in the process and outcome of the conception [2–4].
The uterus is principally a muscular organ, whose parietal structure can be divided into three components: (i) the inner layer or endometrium; (ii) the middle layer, muscular or myometrium; (iii) the external or serose layer. The pathological processes that have origin in the endometrium can manifest themselves as lesions that protrude to the cavity (polyps, endometrial hyperplasia; see Chap.​ 6) or extend themselves towards the muscular layer and act as complications on the uterine wall. Nevertheless, most of the processes that compromise the uterine wall originate from the myometrium, and are represented by the myomas.

The myomas, also called leiomyomas, fibromas or fibroids constitute the most frequent neoplasia during and after the reproductive age, with a prevalence of between 20 and 40 % in women older than 30, which variates with age, race and diagnostic modality. In a study published by Baird and cols [5] the accumulative incidence of the myomas in American women over 50 was greater than 80 % in black women and close to 70 % in white women. European studies have shown a minor prevalence of myomas in the population of the old continent. Heinemann and cols [6] reported that 10.7 % of German women with an average age of 40 had one or more myomas. Following the same steps, Marino and cols [7] in a population of Italian women showed a rate of 21.4 % in women of 30 years of age studied with ultrasound, and Borgfelt and cols [8] in Swedish women found only an incidence of 7.8 % in patients between the ages of 33 and 40.
The myomas are benign tumors of the smooth muscle, unique or multiple (more frequently) and of variable size [9, 10]. They constitute round masses of defined edges that displace the normal myometrium, which forms a pseudocapsule that delimits them. The most frequent location is at the fundus of the uterus, on the middle line. The locations at the level of the cervix are infrequent, and are rare on the round ligaments. In Table 7.1 the macroscopic classification of the myomas is detailed.


Frequently asymptomatic, these tumors can be associated with metrorrhagia, pelvic pain, intestinal or vesical dysfunction, infertility and recurrent abortions. Approximately 5–10 % of the infertile women have at least one myoma, while that as the only cause is found in only 1–2.4 % of the patients [2]. In its evolution, the myomas can suffer different changes that alter its habitual structure, which are enumerated in Table 7.2. The hyaline degeneration is the most frequent and is present in almost all the myomas. It is characterized by the replacement of muscular fibers for poorly delimited collagen bands that confer an extra soft appearance. In certain circumstances, the hyaline areas can liquate and give place to the formation of cysts. In other cases the presence of amorphous calcifications is frequent, in occasions of very high density (Fig. 7.1). When the blood supply is insufficient, in particular if the myoma acquires a considerable size, necrosis is produced (Fig. 7.2). Grease and sarcomatose transformations in myomas are rare.

Degenerative processes of the myomas 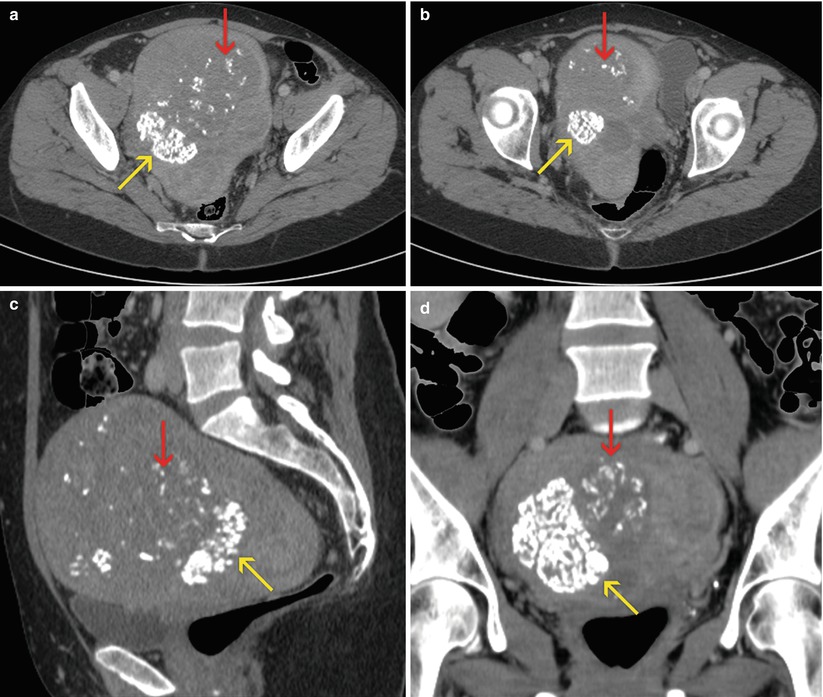 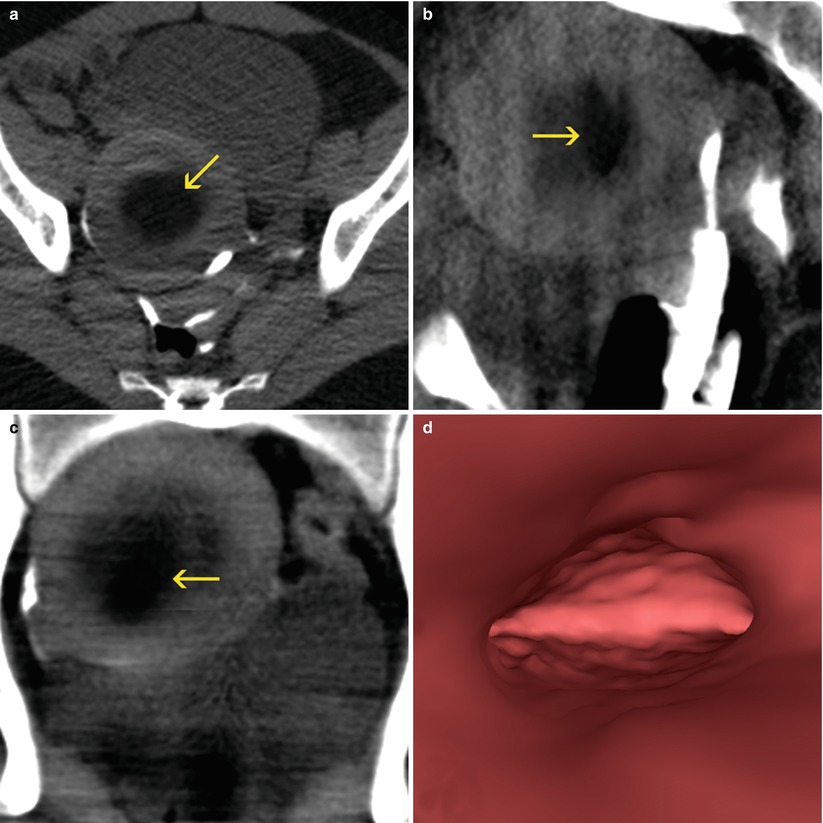 The traditional classification of the myomas is based on the location of the tumor in the width of the uterine wall and they are divided in submucosal, intramural and subserosal (Fig. 7.3). 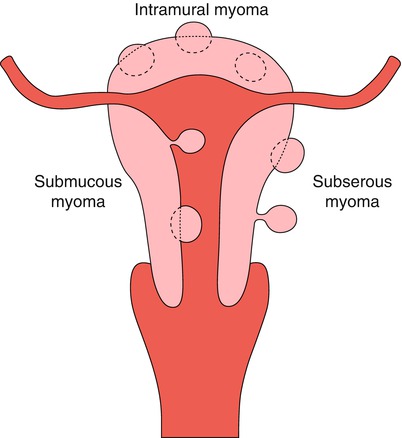 Classification of myomas according to their location on the uterine wall

Submucosal myomas, the least common, are the ones that most frequently generate symptoms. They grow under the endometrium and push it, distorting the uterine cavity. In Table 7.3 the two proposed classifications for the differentiation of the submucosal leiomyomas in respect to the intramural component of the tumor are mentioned, which is important at the moment of deciding the surgical technique and of foreseeing the success of the procedure (Fig. 7.4) [11, 12].

The intramural or interstitial myomas are located in the width of the myometrium and do not distort the endometrial cavity. They can however deform the external uterine outlines, but the projection on the serose surface must be less than 50 % of its volume. When they are of great size they generate an important increase of the uterus, which acquires a lobulated and globulated aspect, with distortion of its morphology [13].

The subserosal myomas grow towards the external surface of the uterus, and more than 50 % of the volume of the myoma must stick out of the serose surface. They can adopt a sessile or pedunculated configuration.

From the point of view of the imaging diagnosis, the ultrasound is the method most frequently used, because of its availability as well as for its low cost and relatively good diagnostic accuracy. The assessment of the endometrium-myometrial interface permits the establishment of the differential diagnosis between intracavitary submucosal myomas and the endometrial polyps. This discrimination is possible in the ultrasound as well as in the magnetic resonance imaging (MRI), but cannot be precisely established in the conventional hysterosalpingography studies (HSG) or in the virtual hysterosalpingography (VHSG). The submucosal myomas with intramural extensions are harder to differentiate from the polyps with an echography, having the MRI or the hysteroscopy a larger diagnostic importance (Fig. 7.5). In the echography or hysteroscopy, the grade of the intramural extension is determined taking into account the angle formed by the myoma and the endometrium (Fig. 7.6). Also, on occasions, the echography can clearly discriminate a tumor in the width of the healthy myometrium and determine its depth. The HSG does not provide this information. On the other hand, the VHSG allows the estimation of the intramural component of the submucosal myomas in relation to the angle that is formed with the wall of the endometrium, also of the density of the myomatose nucleus when this one is different to the rest of the myometrium that surrounds it (Fig. 7.7). The MRI is the most trustful and sensible method for the classification of the different types and grades of intramural extension, thanks to its great tissular discrimination that permits the clear identification of the endometrial-myometrial interface and of the signal changes of the leiomyomas, different to the signal of the normally organized myometrium (Fig. 7.8). 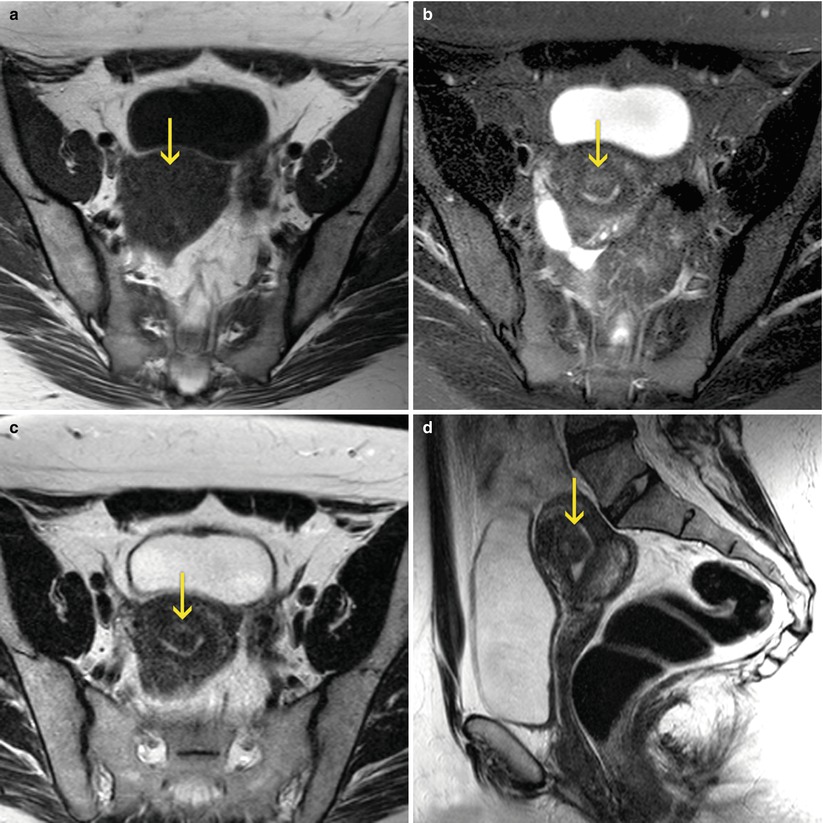 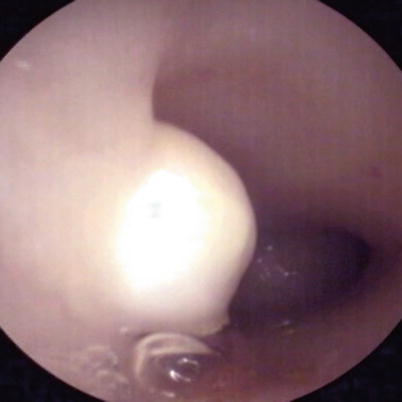 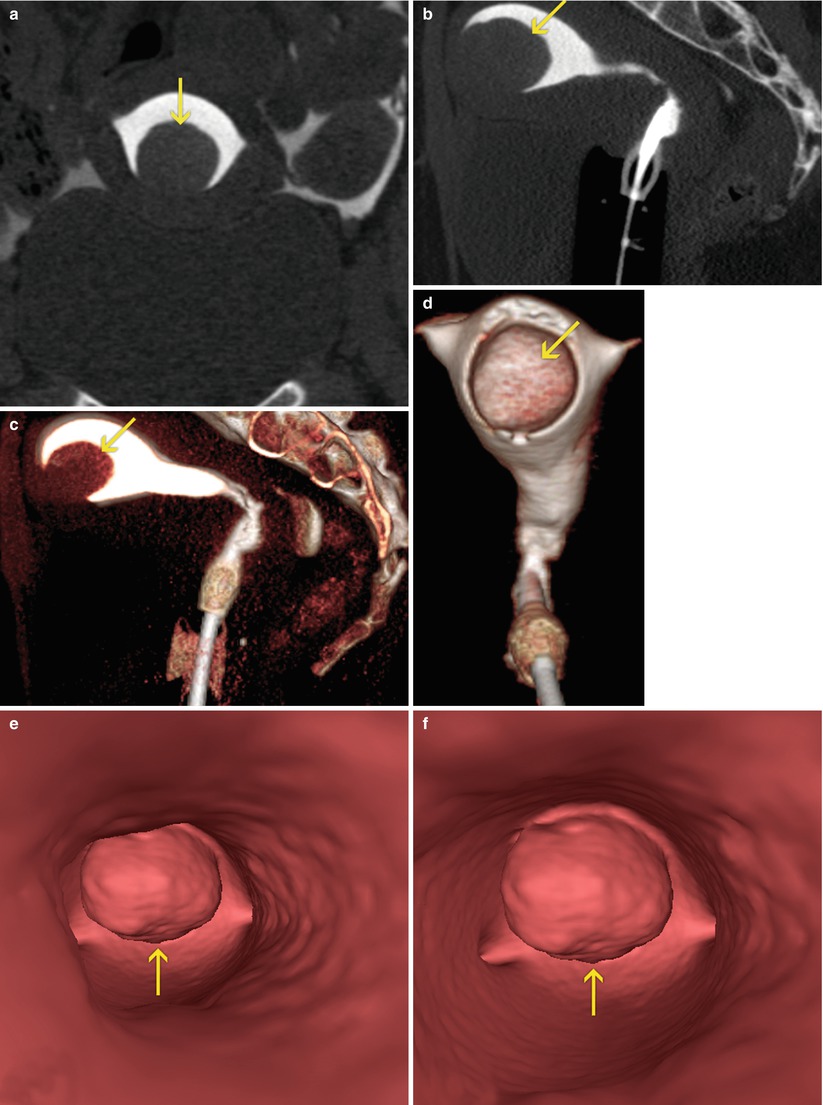 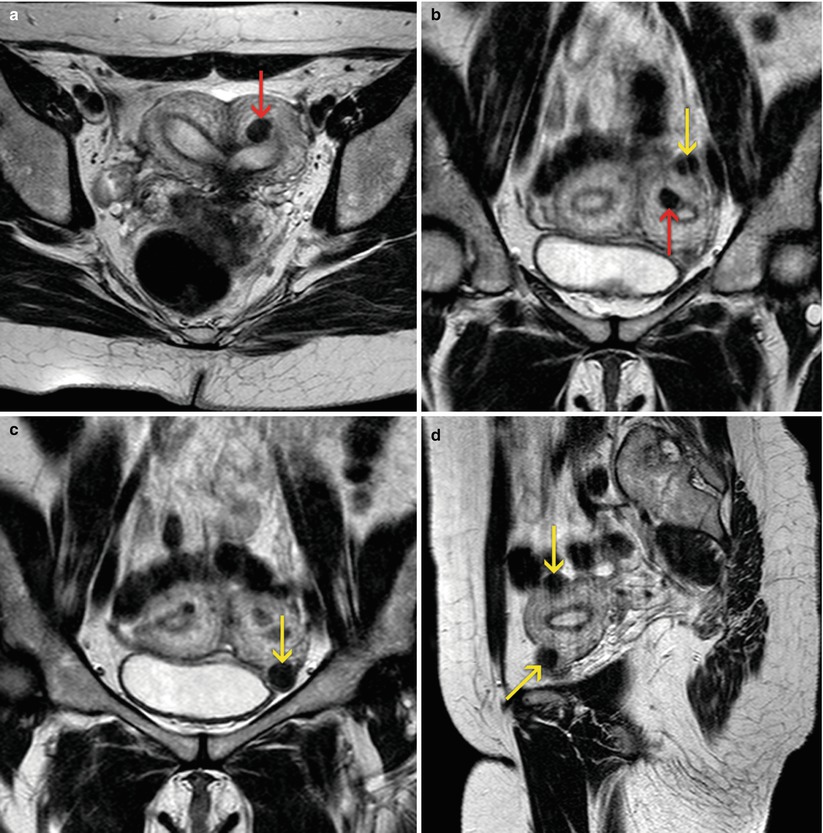 MRI of the female pelvis. Bicornuate uterus, with presence of small subserous (yellow arrows) and intramural (red arrows) myomas. (a) Axial T2 weighted image. (b, c) Coronal T2 weighted images. (d) Sagittal T2 weighted image
The echography evaluates the different layers of the uterus wall and its widths, as well as the endometrial-myometrial interface [14]. The characteristic finding in the myomas is the presence of a solid hipoechoic mass, on occasions heterogeneous depending on the calcium content or type of associated degeneration (Fig. 7.9). When the number is great and the lesions voluminous, they distort the uterine silhouette. The sensitivity of the transvaginal ultrasound (TVU) for the diagnosis of the myomas is of 80–90 % specificity and a positive predictive value of 90 %. The sonohysterography that distends the endometrial cavity with physiological solution notably enhances the diagnostic capacity of the TVU (Fig. 7.10). It is one of the best methods to classify the submucosal myomas, and in this way decide the surgical approach for the treatment. These myomas are visualized as subendometrial masses, of low echogenicity and wide base, which displace the endometrium alterating the endometrial-myometrial interface. The grade of protrusion in the cavity is variable. When the line of the endometrium is distinguished on the surface of the mass, the submucose nature of the lesion is documented; nevertheless this finding is not always present (Fig. 7.11) [15]. 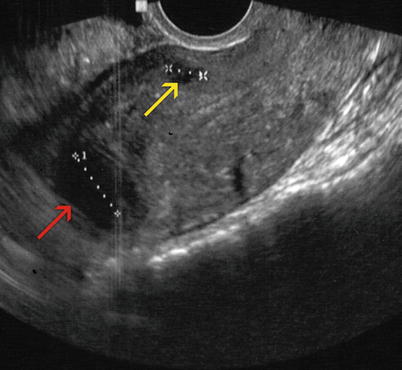 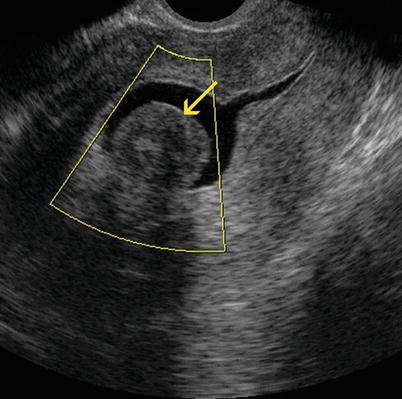 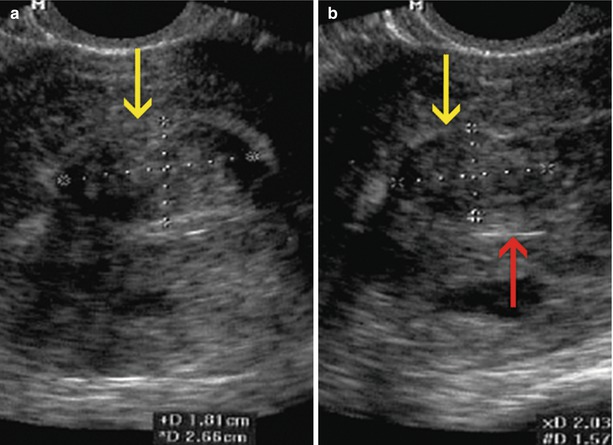