Usage of Gadolinium in Allergic Patients

In the daily practice of the imaging department, the virtual hysterosalpingography (VHSG) examination is performed with iodinated contrast; however, in patients with an allergic history, and in particular with radiographic dyes containing iodine, its usage is contraindicated [1–5].
There exist different iodinated contrast mediums which have been utilized throughout the years for the X-ray hysterosalpingographies. These contrast agents are classified in two categories, depending on if they are lipid-soluble or water-soluble. Within the lipid-soluble iodinated contrast agents, the iodized oil (Lipiodol; Guerbet, Roissy, France) is a mixture of ethyl esters of iodized fatty acids of poppy seed oil. Due to its possible effect on the production of pulmonary fat embolism, persistence of the contrast in the peritoneal cavity as a result of the lack of absorption and the necessity of doing a pelvic X-ray 24 h after its administration, the general utilization of this contrast medium was desisted in all X-ray hysterosalpingographies.
Within the group of water-soluble contrasts there are two according to their physical and chemical characteristics; ionic and non-ionic. The ionic iodinated contrast materials are hyperosmolal with respect to the plasma, up to five times superior. These contrasts were the ones initially utilized to perform the VHSG studies.
The non-ionic iodinated contrast agents, with the advantage of having less osmolality, present a diminished rate of moderate and severe adverse reactions, although no scientific evidence that they reduce deadly reactions exists. These are the contrasts currently utilized to perform routine VHSG.
The exact mechanism responsible for the secondary adverse reactions of the use of iodinated contrast media is unknown. The most clearly identified factor up to date is the osmolality. It is ideal that this be the lowest possible or similar with regards to the plasma.
At the time of deciding which contrast to utilize, the objective is to try to fully reduce the possibility of the patient presenting an adverse reaction. These can have different causes and severities. When deciding and choosing the contrast media it is of utmost importance to take into account and control, the risk of allergic reactions
Regarding the cause, the adverse reactions can be classified into two basic types:

As far as severity, the adverse reactions can be divided in mild, moderate and serious:

Hence in the case of patients with a history of iodine allergy, iodinated contrast media can be replaced with gadolinium.
The Research Team at Diagnóstico Maipú carried out a scientific investigation with the aim of testing gadolinium for the realization of these diagnostic studies.
Gadolinium, which is a paramagnetic substance utilized in magnetic resonance, has been used as a contrast medium in X-ray hysterosalpingographies to avoid possible complications caused by the iodinated contrast.
It must be taken into account that gadolinium is a safer contrast medium than iodine. An anaphylactic rate of 0.0003 % has been described in literature and a rate of adverse effects of 0.01 %, in intravenous injections. Hence the possible effect of endocavitary application is even lower.
Generally, the adverse reactions are mild, including nauseas, vomits, headaches and dizziness. The pruritus, maculopapular rash and other skin eruption of varying types are the most frequent and are rarely there is bronchospasm. Anaphylactic reactions are very infrequent (0.001–0.01 %).
Our research group evaluated the utility of gadolinium as a contrast agent to perform VHSG exams, and studied the intraluminal enhancement, the image quality and the discomfort of the patients compared to VHSG carried out with iodinated contrast, with the aim of determining if the gadolinium could be utilized as an alternative contrast in allergic patients. Fifty patients with a diagnosis of infertility were studied via VHSG performed in a 64-slice CT scanner (Brilliance 64; Philips Medical Systems, Cleveland, OH, USA). In 25 patients, the VHSG was performed with iodinated contrast and in the other 25 with gadolinium. The technical parameters used were the same for both acquisitions: 0.9 mm slice thickness; 0.45 mm reconstruction interval, pitch 0.64; gantry rotation time of 0.5 s; 120 kV and 100–150 mAs, with an average duration for each scan of 4 s.
The studies performed with iodinated contrast were done with a 15 % dilution in saline solution, and 40 % in the ones carried out with gadolinium. Twenty milliliters of dilution were used in each study. The endoluminal enhancement was evaluated in both studies hence a region of interest (ROI) was placed in the cervical canal and in the uterine cavity (Fig. 13.1). A quantitative analysis of the image quality was performed by an experimented radiologist with a scale of 0–10. 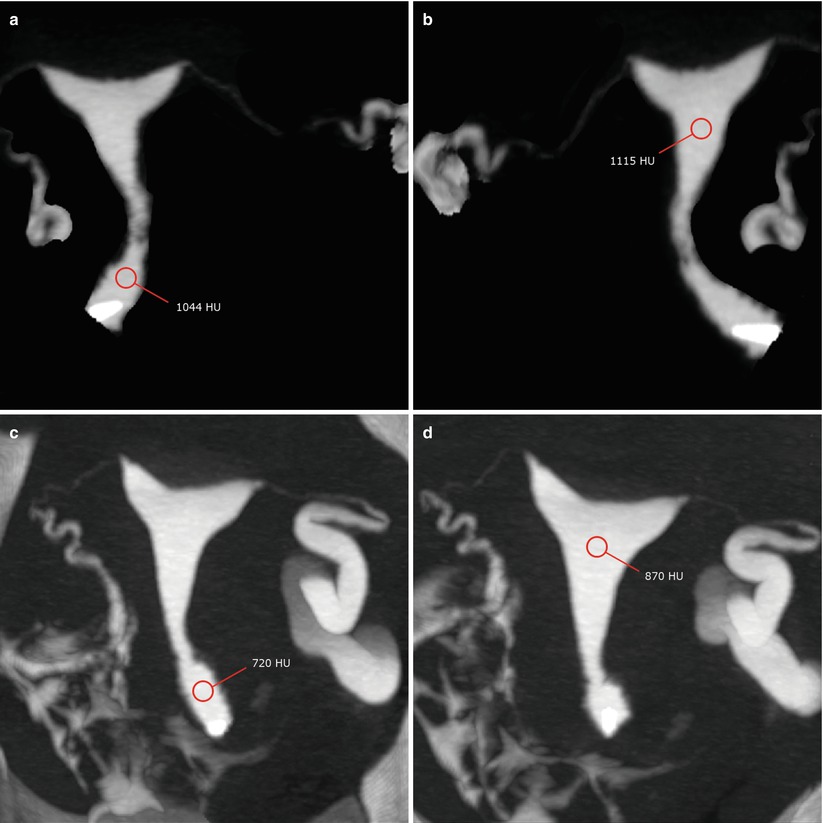 Description of the VHSG Procedure

The previous preparation of the patient was similar to the X-ray hysterosalpingography study. Nevertheless, due to the non invasiveness of the procedure, the prophylactic use of antibiotics was not required. The contraindications for the realization of the study were pregnancy and active pelvic infection. All the VHSG were performed between the 7th and 10th day of the menstrual cycle. All of the patients had to abstain from having sexual relations from the first day of the menstrual bleeding until 48 h after the realization of the exam.
Only gold members can continue reading. Log In or Register to continue