Structures affected by de Quervain’s disease: a schematic diagram; b axial T1-weighted MRI scan; c transverse sonographic scan at the level of the styloid process of the radius. This disorder affects the abductor longus and extensor brevis tendons of the thumb (Abd l—Est b); the tendon sheath (sonographically invisible in the absence of an effusion); and the retinaculum of the first osseofibrous tunnel (white arrows in b and c), which is depicted sonographically as a hypoechogenic structure that surrounds the two tendons and is attached to the bone (c)

De Quervain’s disease is caused by microtrauma, which leads to thickening of the extensor retinaculum, stenosis of the first osseofibrous tunnel, and friction and inflammation of the abductor longus and extensor brevis tendons of the thumb [1, 3]. Factors believed to contribute to the onset of this form of tenosynovitis disease include overuse of the wrist linked to occupational [1, 4] or sport-related activities and anatomic variants (especially the presence of a fibrous vertical septum that divides the tunnel [5] and/or accessory tendons [6]). It is more common in adults but may also be diagnosed in children or adolescents. It is manifested clinically by wrist pain at the level of the radial styloid process, which is exacerbated by movement of the thumb [1].
The diagnosis is based on the history and physical examination, which includes the Finkelstein test (Fig. 4.2). This involves ulnar deviation of the wrist with the thumb flexed, a maneuver that causes pain in the area of the styloid process. 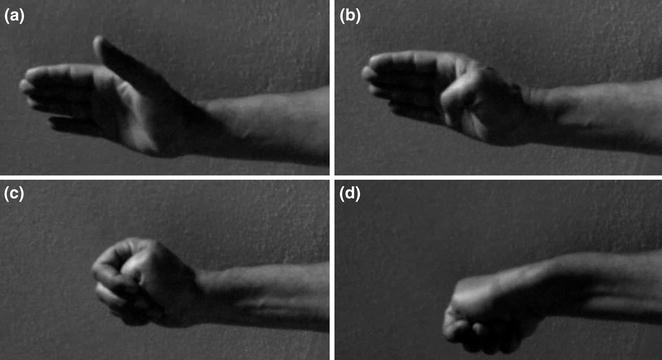 Finkelstein test. The thumb is flexed, held against the palm (a, b) and covered with the other digits (c). The wrist is then flexed (d). This maneuver places tension on the first compartment tendons, and in the presence of de Quervain’s disease, it is associated with pain at the level of the styloid process. Positive findings are also seen in some patients with osteoarthritic changes at the level of the trapeziometacarpal joint
The sonographic findings associated with de Quervain’s disease include hyperechoic thickening of the retinaculum with enlarged tendons that are often difficult to distinguish from one another.
On transverse scans, the tendons also appear rounder than usual. In the acute phase, fluid can be seen inside the sheath, distal to the retinaculum (Fig. 4.3); in the chronic phase, there may be little or no fluid [1] (Fig. 4.4). 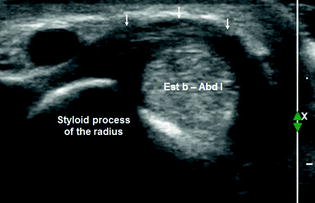 Fig. 4.3
Only gold members can continue reading. Log In or Register to continue