Focal or regional areas of decreased lung attenuation (i.e., increased lung lucency) can have a variety of causes and HRCT appearances. These include lung destruction due to emphysema, decreased lung perfusion, cyst formation, and airway dilatation. Airway dilatation, or bronchiectasis, is usually identifiable as such and will be discussed in the next chapter.

Emphysema reflects lung destruction that may be the end result of several different processes including cigarette smoking, enzyme deficiency, and drug abuse. Emphysema is categorized by the part of the secondary pulmonary lobule that is involved as centrilobular, panlobular, or paraseptal. Each of these has a different HRCT appearance and different possible causes (Table 5.1).

Centrilobular emphysema (CLE) is common and strongly associated with cigarette smoking. In general, the severity of emphysema correlates with the length of time and amount a patient has smoked. Smoke induces lung destruction by causing chronic inflammation in and around small airways (respiratory bronchiolitis). Because these small airways are centrilobular in location, emphysema associated with smoking is predominantly centrilobular in distribution. As lung destruction becomes more extensive, emphysema may involve the entire pulmonary lobules.

On HRCT, CLE is visible as focal, air-attenuation cystic lucencies, a few millimeters to 1 cm in diameter, usually without a visible wall. These lucencies tend to predominate in the upper lobes and are most severe in the central lung regions. Small areas of CLE may be seen to surround the dot-like centrilobular artery (Fig. 5.1).

This appearance on HRCT is diagnostic of CLE and biopsy is not required for diagnosis if the patient has a smoking history. HRCT is able to detect very early stages of CLE and is often more sensitive than pulmonary function testing. 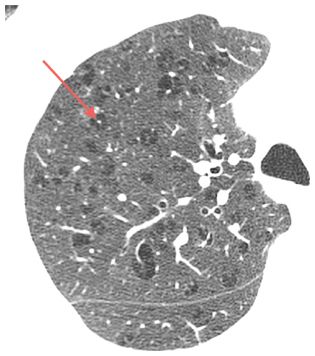 Centrilobular emphysema. HRCT in a smoker shows focal, upper lobe, central, air-attenuation lucencies without a recognizable wall. Note the centrilobular artery at the center of some of these lucencies (arrow).

Panlobular emphysema (PLE) is commonly associated with alpha-1-antitrypsin deficiency, but may also be seen in association with cigarette smoking and intravenous injection of oral Ritalin. PLE involves all portions of the secondary pulmonary lobule equally. For this reason, it is generally unassociated with focal areas of lucency on HRCT, as is CLE. Instead, it shows generalized lung lucency with attenuated (small) vessels. Lung volume is increased. In other words, PLE results in a lung that is too big and too black and contains vessels that are too small. In cases of early PLE, the diagnosis may be difficult because focal abnormalities are not present.

PLE tends to be diffuse or lower lobe predominant or diffuse in distribution (Fig. 5.2A, B).

Paraseptal emphysema (PSE) may be associated with cigarette smoking or may be idiopathic. On HRCT, PSE is characterized by air-attenuation cysts, from a few millimeters to 2 cm or more in diameter, occurring in a single layer in the subpleural lung (Fig. 5.3). It is seen in the peripheral lung, adjacent to the mediastinum, and adjacent to fissures. The cysts of PSE are outlined by a discrete and thin wall. These walls may correspond to interlobular septa. Given its association with smoking, there is often coexistent CLE.

As discussed in Chapter 2, PSE should not be confused with honeycombing, which may have a similar appearance. There are several distinguishing features.

PSE occurs in a single layer, while honeycomb cysts are often in multiple layers. The walls of PSE are thinner than those of honeycombing, and the cystic spaces are usually larger. PSE is unassociated with signs of fibrosis such as traction bronchiectasis and irregular reticulation, which are typically seen with honeycombing. Honeycombing usually predominates at the lung bases, while PSE is most severe in the upper lobes. One caveat: both PSE and honeycombing may be seen in the same patient.

There is no specific pathologic type of emphysema termed “bullous emphysema,” but this term is often used to refer to emphysema that is associated with large bullae. A bulla is defined as a sharply defined area of emphysema measuring more than 1 cm in diameter. Bulla walls are usually well seen on HRCT.

Bullae occur most commonly in patients with PSE or CLE. They are less frequent with PLE. Bullous emphysema is often asymmetrical.

The term mosaic perfusion refers to the presence of geographic regions of varying lung attenuation due to regional differences in lung perfusion.

Approximately 50% of lung attenuation is derived from blood. Consequently, when blood flow is decreased to a specific region of lung, its attenuation appears decreased on HRCT. On HRCT, the attenuation of regions of mosaic (decreased) perfusion is intermediate between that of normal lung and room air. 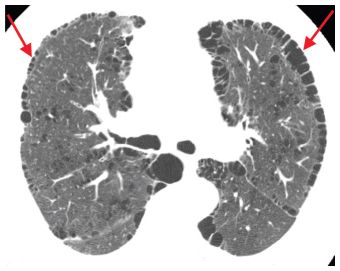 Paraseptal emphysema in a patient with a smoking history. Subpleural, air-density cysts (arrows) are present in a single layer. Note a thin wall at the periphery of the areas of emphysema. There is associated centrilobular emphysema in the central lung.

In patients with mosaic perfusion, the vessels in areas of lung lucency usually appear smaller on HRCT than those in normal lung regions. This finding is key in making the diagnosis of mosaic perfusion as a cause of patchy lung attenuation.

When the lung shows patchy or geographic lung attenuation on HRCT (i.e., the lung has a “mosaic” appearance), one must first determine if the relatively opaque or the relatively lucent lung regions are abnormal. If the opaque lung is abnormal, the abnormality represents ground glass opacity. If the lucent lung is abnormal, the pattern represents mosaic perfusion. There are several features that help in making this distinction.

With mosaic perfusion, regions of heterogeneous attenuation tend to be geographic and sharply demarcated (Fig. 5.4). Usually there is a sharp border between lung that is affected (relatively lucent) and unaffected (relatively opaque), reflecting normal geographic vascular supply. Ground glass opacity, on the other hand, usually has ill-defined borders because the responsible process results in variable involvement of the interstitium or alveoli (Fig. 5.5). 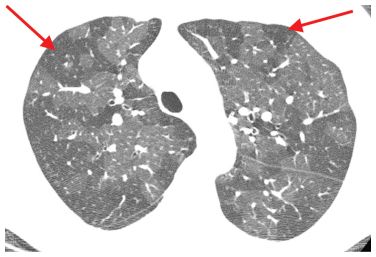 Mosaic perfusion. Heterogeneous lung density with geographic areas of decreased lung attenuation (arrows) is present in a patient with constrictive bronchiolitis due to neuroendocrine hyperplasia. This sharp demarcation between opaque and lucent lung suggests that the lucent lung is abnormal. Vessels in lucent regions appear small in comparison to vessels in the denser regions.

On occasion, however, ground glass opacity presents with geographic abnormalities. For instance, viral infections or alveolar proteinosis may present with geographic regions of ground glass opacity (Fig. 5.6). In these cases, there is usually a greater attenuation difference between opaque and lucent lung, whereas the difference is usually not as pronounced with mosaic perfusion.

As mosaic perfusion represents regional decreases in lung perfusion, the vessels in affected regions usually appear smaller than in areas of normal lung (Fig. 5.7). This finding is more commonly seen with vascular causes of mosaic perfusion and is accentuated in severe cases. The absence of a difference in vessel size does not exclude mosaic perfusion as a cause of geographic attenuation. 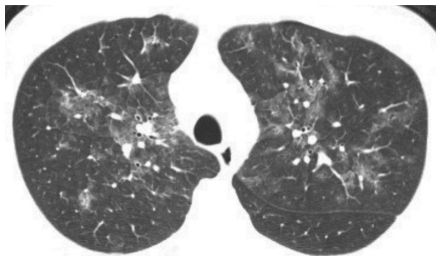